This year, the NPHW theme is “Creating the Healthiest Nation: For science. For action. For health.” The week will recognize the contributions of public health and highlight issues that are important to improving the community’s health. Events are open to all USA students, faculty and staff.

Thursday, April 4 - Technology and Public Health
Documentary and panel discussion on the media’s influence in the anti-vaccination movement
6:30 to 8 p.m., College of Medicine first-floor auditorium

Resources for the Wednesday, Friday, Saturday and Sunday topics will be delivered via email. Some events are limited to students or may require an RSVP. See the flyer for details.

For more information or to RSVP, email PHIG_USACOM@southalabama.edu.
Posted by Med School Watercooler at 3:14 PM No comments: 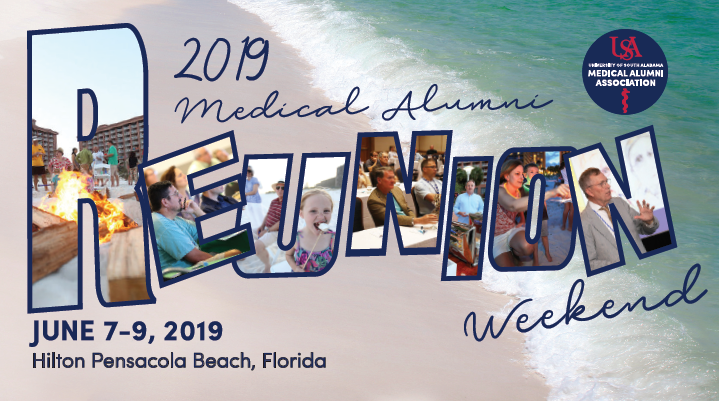 The University of South Alabama Medical Alumni Association will host its annual Medical Alumni Weekend June 7-9, at the Pensacola Beach Hilton in Pensacola, Fla. All alumni and their family members are invited to attend.

The event is a multi-day class reunion held every summer that reunites USA medical graduates on the Gulf Coast. It offers Continuing Medical Education (CME) accredited courses and an alumni dinner sponsored by the association. The classes of 1979, 1984, 1989, 1994, 1999, 2004, 2009 and 2014 will be honored at this year’s event.

For the full schedule of events and to register online, visit the EventBrite page.

For additional information, contact the Medical Alumni Office at (251) 460-6805 or medalum@southalabama.edu.

Posted by Med School Watercooler at 2:08 PM No comments: 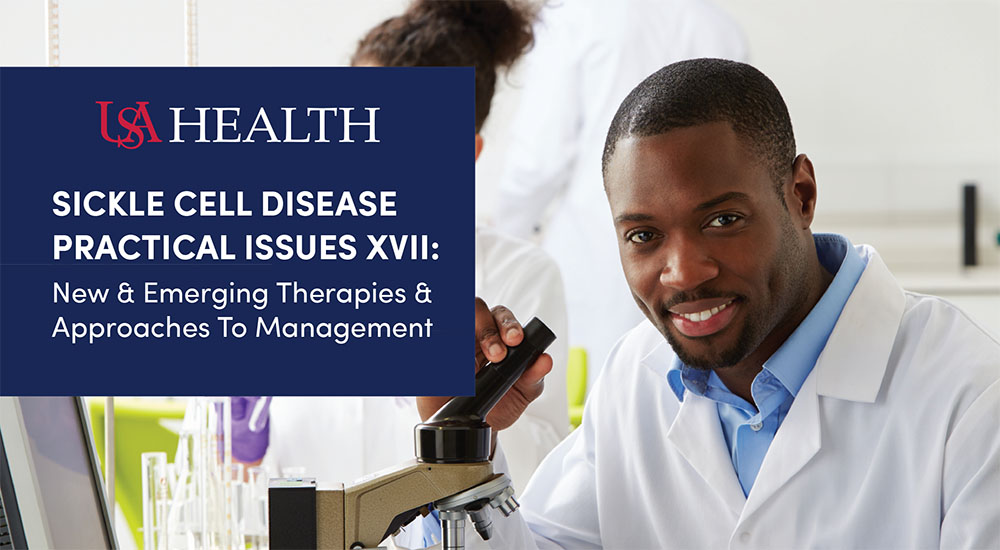 The event will provide up-to-date information on treatment and management of sickle cell disease.

For more information on the conference, visit www.southalabama.edu/colleges/com/research/sicklecell.html. Email vgardner@health.southalabama.edu or call (251) 470-5893.
Posted by Med School Watercooler at 2:07 PM No comments: 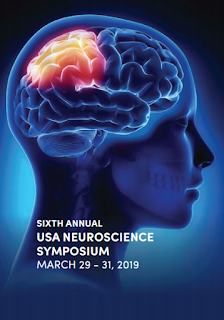 The sixth annual USA Neuroscience Symposium is set for March 29-31, 2019, at the Pensacola Beach Hilton.

The program provides an update on important topics in neurology, and addresses clinical competencies of knowledge, performance, and improving patient outcomes. Topics include Parkinson's disease, seizures, stroke and multiple sclerosis.

Dr. Steve Cordina, associate professor of neurology at the University of South Alabama College of Medicine, will serve as the course director.

For more information and to register, click here.
Posted by Med School Watercooler at 1:26 PM No comments:

The USA Health Office of Development has recently promoted two employees and added a new staff member that will help engage community and business leaders and grateful patients to advance the mission and health care services provided by USA Health.

Leila Nichols has been promoted to director of medical affairs and alumni relations. Nichols joined the department in 2018 and has played a key role in obtaining major gifts and sponsorship support for USA Health along with developing relationships with internal and external donors.

“I am thrilled to promote two internal candidates with a proven track record of success,” said Kelly McCarron, USA Health vice president for development and alumni relations. “We have a tremendous opportunity to more effectively share our story and expand our philanthropic base.”

Brittany Callaway has joined the staff as associate director with USA Health. Callaway brings valuable experience with cultivating relationships with hospital leaders. Her role will focus on major gift fundraising for USA Health Mitchell Cancer Institute and the Grateful Patient Program for USA Health.
Posted by Med School Watercooler at 11:35 AM No comments:

Cheryl Woodruff, charge capture specialist in the department of neurosciences, received the USA Health Physicians Group Employee of the Month Award for March.

Woodruff has worked at USA Health for six years and in the neurosciences department for the past eight months. As the charge capture specialist, she monitors billing charges, co-payments and referrals and ensures all charges are captured accurately. 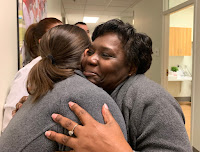 The department has recently been short-handed, and Woodruff took on additional front office duties to assist with the staffing shortage.

"I nominated Cheryl for this award not just for stepping up when we needed it but also for her teamwork and leadership she showed while being in the front office," said Terry O'Neil, director of operations for neurosciences. "Not once did Cheryl complain that her work was getting behind; instead she embraced the opportunity to serve the patients, co-workers and physicians of neuroscience, exhibiting best practice skills throughout her time in that area of the clinic."

O'Neil added, "Cheryl is kind, compassionate and an all-around nice person. Cheryl is a pleasure to lead, and we are lucky to have her on our team."

Together, researchers at the University of South Alabama College of Medicine are addressing this public health crisis by studying the mechanisms leading to abrupt cognitive impairment among patients in intensive care units.

Their novel research – which explores the potential link between hospital-acquired bacterial pneumonia and cognitive decline – was recently published in the American Journal of Respiratory and Critical Care Medicine.

According to Troy Stevens, Ph.D., director of the USA Center for Lung Biology and Lenoir Louise Locke Chair of Physiology and Cell Biology at the USA College of Medicine, this research holds far-reaching potential to impact patient care, as previous research has not linked lung infection-induced amyloids to the decline in cognitive function.

“This work demonstrates that hospital-acquired lung infections cause production of amyloid proteins, which have been incriminated in dementia and Alzheimer's disease,” he said. “These proteins can be collected from the airways, the blood and the cerebrospinal fluid of infected patients and have the ability to kill cells and injure organs. The proteins are also difficult to get rid of, and are self-replicating and transmissible among cells. They not only injure the lung and other organs during infection, but they may continue to hinder organ repair after the lung infection is treated with antibiotics.”

Mike Lin, Ph.D., assistant professor of physiology and cell biology at the USA College of Medicine, serves as principal investigator on the project. “We found that patients in the ICU who contract nosocomial pneumonia have high levels of ‘toxins’ in their bodily fluids, compared to critically ill patients who do not have bacterial pneumonia,” he said.

According to Dr. Lin, the Centers for Disease Control and Prevention estimates that on any given day, about one in 25 hospital patients has at least one health-care associated infection. “Among the infections, bacterial pneumonia not only remains the most prevalent, but is also on the rise and is most closely linked to morbidity and mortality including cognitive decline,” he said.

Despite advances in medicine that have significantly prolonged life expectancy for patients in intensive care units who develop bacterial pneumonia, the disease-associated neurodegeneration and dementia is increasingly worrisome. “In the last 10 years, it has become recognized that one of the major problems exhibited among patients who become critically ill is impairment in cognitive function,” Dr. Lin added.

Ronald Balczon, Ph.D., associate professor of biochemistry and molecular biology at the USA College of Medicine, also serves as principal investigator of the study. “My role is to isolate the toxic reagents from experimental protocols and human specimens that Dr. Lin uses in his studies,” he said. “I do this by infecting cultured cells with the Pseudomonas bacteria and then collecting the materials that the cells secrete following infection, or purifying the toxins from human airway fluid, blood and cerebrospinal fluid. I then characterize those materials before transferring them over to Dr. Lin for his experiments.”

Dr. Lin credits his colleagues support, input from collaborators at the University of Alabama at Birmingham and extramural support for helping to secure publication in the American Journal of Respiratory and Critical Care Medicine. Last year, Dr. Lin was awarded a $1 million four-year grant from the National Institutes of Health to better understand the potential connection between bacterial infections and cognitive decline.

“It is extremely important to have extramural support to fund research, as scientific and clinic developments are costly,” he said. “This project provides a testable and previously unrecognized mechanism for the rampant cognitive impairment in survivors of critical illness with nosocomial pneumonia comorbidity.”

Drs. Stevens said this bench-to-bedside research holds extreme importance and speaks to the caliber of research conducted at USA. “We have talented investigators at our institution,” he said. “This work represents ongoing collaboration between researchers, graduate students and technical staff who contributed to this work.”

“Complex biomedical science requires a diverse and sophisticated group of talented investigators coming together to address important problems,” Dr. Stevens said. “In addition to the input added by Drs. Lin, Balczon and myself, Dr. Silas Leavesley and Diego Alvarez from USA played an instrumental part in this research. This work also required ongoing collaborations with critical care clinical-scientists, Jean-Francois Pittet and Brant Wagener, and a clinical microbiologist, Stephen Moser, at the University of Alabama at Birmingham. Sarah Voth, a Ph.D. candidate in the department of physiology and cell biology at USA, and Jessica Bell, technical staff, also contributed to this work.”

According to Dr. Balczon, he is excited to see what the future holds for this research. “The long term goal is to develop treatments that can be translated into patient care,” he said. “We will go wherever the data takes us and I am excited to be part of this innovative study.”

The American Journal of Respiratory and Critical Care Medicine (AJRCCM) publishes high-quality original papers, reviews, and clinical trials in respiratory, critical care, and sleep medicine to foster advances in translational research and clinical practice. The AJRCCM focuses on human biology and disease, as well as animal studies that contribute to the understanding of pathophysiology and treatment of diseases that affect the respiratory system and critically ill patients.

Posted by Med School Watercooler at 10:23 AM No comments:

The University of South Alabama College of Medicine Public Health Interest Group (PHIG) will host its first fundraiser on March 22 at Taziki’s Mediterranean Café, located at 9 DuRhu Drive, suite 300, in Mobile. Place your order between 5 and 9 p.m. to dine in, carry out, or have it delivered with WAITR.

Proceeds will allow PHIG to continue providing lunch and learns and training activities to students. The organization strives to improve the health, education, and care for the people of Mobile and surrounding areas as well as expose USACOM students to public health topics, research and practice.

Posted by Med School Watercooler at 12:06 PM No comments: