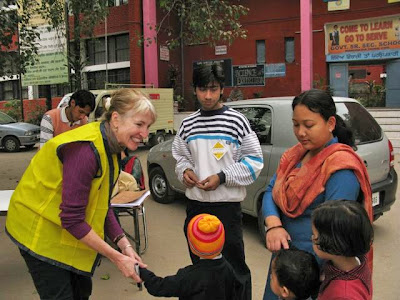 Soon after arriving in India, Dr. Maggi O’Brien knew she was in the right place at the right time.

A mere 10 days before her departure date, Dr. O’Brien, associate dean of student affairs at the University of South Alabama College of Medicine, learned of the Rotary International trip to India that was centered around National Immunization Day (NID) -- Feb. 7, 2010.

“It was the perfect scenario for me to get to India. I immediately got my immunizations at the Board of Health, booked the flights and applied for a visa,” Dr. O’Brien said. “With no passport and visa in hand two days before the scheduled departure, I had reconciled myself that the trip not was not happening.”

Her visa finally issued the afternoon of the day before her departure, and was delivered to her door a mere four hours before her flight. “I was going to India!” she recalled.

Dr. O’Brien knew this trip was going to be the perfect introduction to India, with a good cause attached. She would be giving vaccines to children up to five years of age as part of an “End Polio Now” campaign.

Polio, a viral disease acquired by the fecal-oral route that can cause paralysis, was last documented in the United States in 1979. It is still endemic only in Pakistan, Afghanistan, India and Nigeria. “India experiences approximately 850 new cases each year, and it is a totally preventable disease,” Dr. O’Brien said.

The group traveling to India was made up of 37 Rotary members, one of whom was Dr. O’Brien. The group included participants from the United States, Australia, Finland and Norway. Three were from Mobile, and a news broadcaster and his camera man from Buenos Aires were along to film a documentary.

In Delhi, the group visited the manufacturer of the oral vaccines, as well as a local World Health Organization office. All were keenly aware of the extreme poverty and lack of sanitary conditions that are so prevalent in India.

The group later headed north toward their NID assignment in the city of Chandigarh. In route, they stopped off at a Rotary Club in Pandipat for an anti-polio rally by the local school children. After attending the anti-polio events, the group members met their assigned Rotary host families.

Dr. O’Brien stayed with Mr. and Mrs. Mattaro for four nights, a Sikh host family, who spoke English well but whose primary language is Hindi.

“It was so breathtaking to experience a culture that is so different and to live with a family through their day to day lives,” Dr. O’Brien said. “My time with my host family was another unique facet of the experience.”

On NID, the group members were assigned, with their Rotary hosts and young volunteers, to distribution sites where they gave each infant two drops of vaccine by mouth and then marked the left pinky finger with a purple marker.

“Wearing the Rotary-issued bright yellow vest, I took marker duty for the site, and we vaccinated more than 100 children that day,” Dr. O’Brien said. “The young volunteers I worked with could understand but not speak English; they taught me to count to 10 in Hindi.”

The next two mornings, they were individually assigned to two young health care workers to go door-to-door to find unimmunized infants and administer the drops. English was rarely spoken. “I observed abysmal living conditions, but always cheerful and grateful faces,” Dr. O’Brien said.

The group also visited a number of hospitals and schools supported by Rotary clubs. Toward the end of the trip, the group spent two nights in Delhi and then made one final stop to Agra to see the Taj Mahal.

Dr. O’Brien said it wasn’t the actual “doing” that made the entire experience. “It was the contact with the people and the gratitude that they expressed,” she said. “It was the tears in my host family’s eyes on the morning I was leaving their home and the bonding with my fellow Rotarians.”

“The experience was so multi-layered and enriching; it has had a profound impact on my life.”
Posted by Med School Watercooler at 3:31 PM 1 comment:

Pictured above, Dr. Freischlag presents “Leadership During Times of Change” Thursday night at Health Sciences Building.  Check back next week to view her talk online.
Posted by Med School Watercooler at 3:26 PM No comments:

In Mobile, It's Pollen Allergy Season

Follow this link for expert advice from USA Allergist Dr. Druhan Howell on how to stay healthy this season - http://www.southalabama.edu/usahealthsystem/aboutdrhowell.html .
Posted by Med School Watercooler at 1:25 PM No comments: 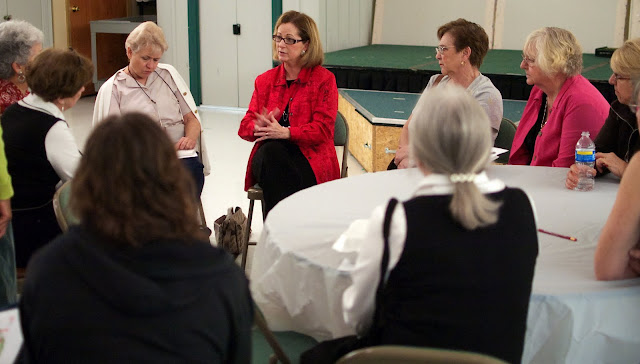 Dr. Clara Massey (center), professor of internal medicine and chief of cardiology at USA, answers questions from Med School Cafe' attendees following Thursday's lecture.  More than 130 attended the lecture that focused on prevention of heart disease in women.  Check back next week, Dr. Massey's lecture will be posted online.
Posted by Med School Watercooler at 11:40 AM No comments: 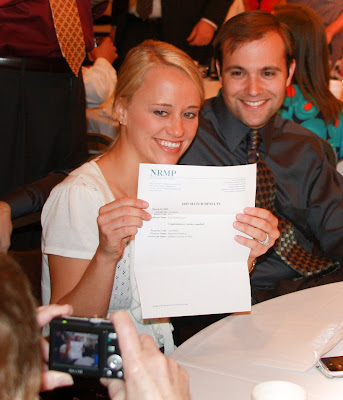 Kim Reaves ('09) smiles for the camera at last year's Match Day event.  Members of the Class of 2010 will find out their residency assignments next week.
On March 18, 2010, after much anticipation, senior medical students and residency training program directors across the United States and Canada will find out this year’s Match Day results. The National Residency Matching Program, or Match Day, is the annual event in which future doctors simultaneously learn where they will be doing their residency training.

Locally, the University of South Alabama’s Match Day will be held at 11 a.m. CST, on March 18, 2010, in the Magnolia Ballroom at the USA Brookley Campus.

“Match Day is the culmination of four years of commitment by medical students who have dedicated themselves toward mastering the science of medicine and have embarked on a path to cultivate the skills essential to practice the art of medicine,” said Dr. Samuel Strada, dean of the USA College of Medicine. “The results of this day will have a major impact on the remainder of these students’ professional careers.”

The Match works like this. After interviewing with several different residency programs - both near and far - students provide a ranking of their top-choice programs in order of preference. The training programs, in turn, rank the students who interviewed. The NRMP matches applicants’ preferences for residency positions with program directors’ preferences for applicants. Each year, thousands of medical school seniors compete for approximately 24,000 residency positions across the United States.

“We have a very diverse senior class this year. More than in recent years, this class has more students interested in Ophthalmology, Psychiatry, Pathology, and Ear, Nose and Throat Surgery residency training programs,” said Dr. Maggi O’Brien, associate dean of student affairs at the USA College of Medicine.

The NRMP also allows couples to form pairs of choices on their primary rank order lists. The couple will match to the most preferred pair of programs on the rank order lists where each partner has been offered a position.

There are 11 distinct residency training programs in the USA Health System. On Match Day, these programs will compete to fill a total of 69 entry-level resident positions in Family Medicine, Internal Medicine, Med/Peds, Neurology, Obstetrics/Gynecology, Orthopaedics, Pathology, Pediatrics, Psychiatry, Radiology, and Surgery. There are a total of 240 residents currently enrolled in these training programs.
Posted by Med School Watercooler at 10:43 AM 2 comments:

Make plans to attend the 19th annual OB/GYN Conference sponsored by the University of South Alabama Department of Obstetrics and Gynecology and the College of Medicine Office of Continuing Medical Education.

This event will be held on April 8-9, 2010 at the Renaissance Riverview Plaza Hotel in downtown Mobile, Ala.

CME's and CEU's will be available. Register now to secure placement in the most interesting breakout sessions.  To register, visit - http://cmetracker.net/USAL/Catalog?SessionType=Course .

To make hotel reservations at the conference rate, visit - http://www.marriott.com/hotels.travel.mobrv?groupCode=USAUSAA&app=resvl .

For any additional information contact: Cathy Black at (251) 415-1491 or E-mail cdblack@usouthal.edu .
Posted by Med School Watercooler at 8:23 AM No comments: