Six medical students at the University of South Alabama College of Medicine recently volunteered at Camp Rap-A-Hope, a week-long summer camp at Camp Grace in Mobile, Ala. The camp is designed to serve children between the ages of 7 and 17 who have or have ever had cancer.

Each year, children across the region enjoy a typical summer camp environment that includes swimming, kayaking, horseback riding, arts and crafts and many other activities.

This was USA medical student Daniel Salisbury’s fifth summer to volunteer as a camp counselor.

One of his favorite aspects of Camp Rap-A-Hope is experiencing a "normal" day with the campers. “Seeing campers – both healthy and sick – enjoy these activities and challenge themselves to try new things allows a person to adopt a new perspective when treating patients in a hospital setting,” Salisbury said. “It helps care providers in maintaining a more patient-centered treatment plan by reinforcing the fact that patients have normal lives outside of the hospital, and it is the care provider's job to do what is best for the patient in getting them back to their normal life.”

As a volunteer counselor, Salisbury coordinates the activities for a cabin of boys ages seven to 11 – the youngest group. “Each year offers plenty of funny stories, eye opening experiences and emotionally moving moments that we will never forget,” he said.

This year, one of Salisbury’s favorite moments was having a video conference with a camper that was unable to make it to camp due to treatment. “This year's camp theme was ‘Rock, Paper, Scissors, Camp!,’ so one of our campers played the rock-paper-scissors game with the boy who was unable to make it.”

Another camper was unable to swim due to his blood counts. “After he visited the doctor during the week, he was told he could finally swim on his last day at camp,” Salisbury said. “He stayed in the lake for three hours before having to undergo his next chemotherapy treatment the next day.”

Third-year medical student Abby Weems has been a counselor at Camp Rap-A-Hope for seven years and has known about the camp since she was a child. Her cousin, who is a year older than her, was diagnosed with leukemia at six years old. “Every summer she left my sister and I for a week to attend this amazing camp,” Weems said.

Weems’ cousin is now in remission and graduated from camp 10 years ago. “She can still tell you about the different themes and activities and people she met,” Weems said.

Community service is important in the first two years of medical school, according to Weems. “It's not only healthy to get out and interact with others, but it also reminds you that you aren't learning everything in vain – someday you will be applying your education to those in the community,” she said. “It's good to be reminded of all of the social aspects that play a role in a person's health and well-being.”

“As counselors, we participate in all of the activities with the campers and just try to make the week as fun as it can be for them,” she added.

Camp Rap-A-Hope hosts several events open for volunteer opportunities throughout the year. For more information, visit www.camprapahope.org.
Posted by Med School Watercooler at 10:26 AM No comments: 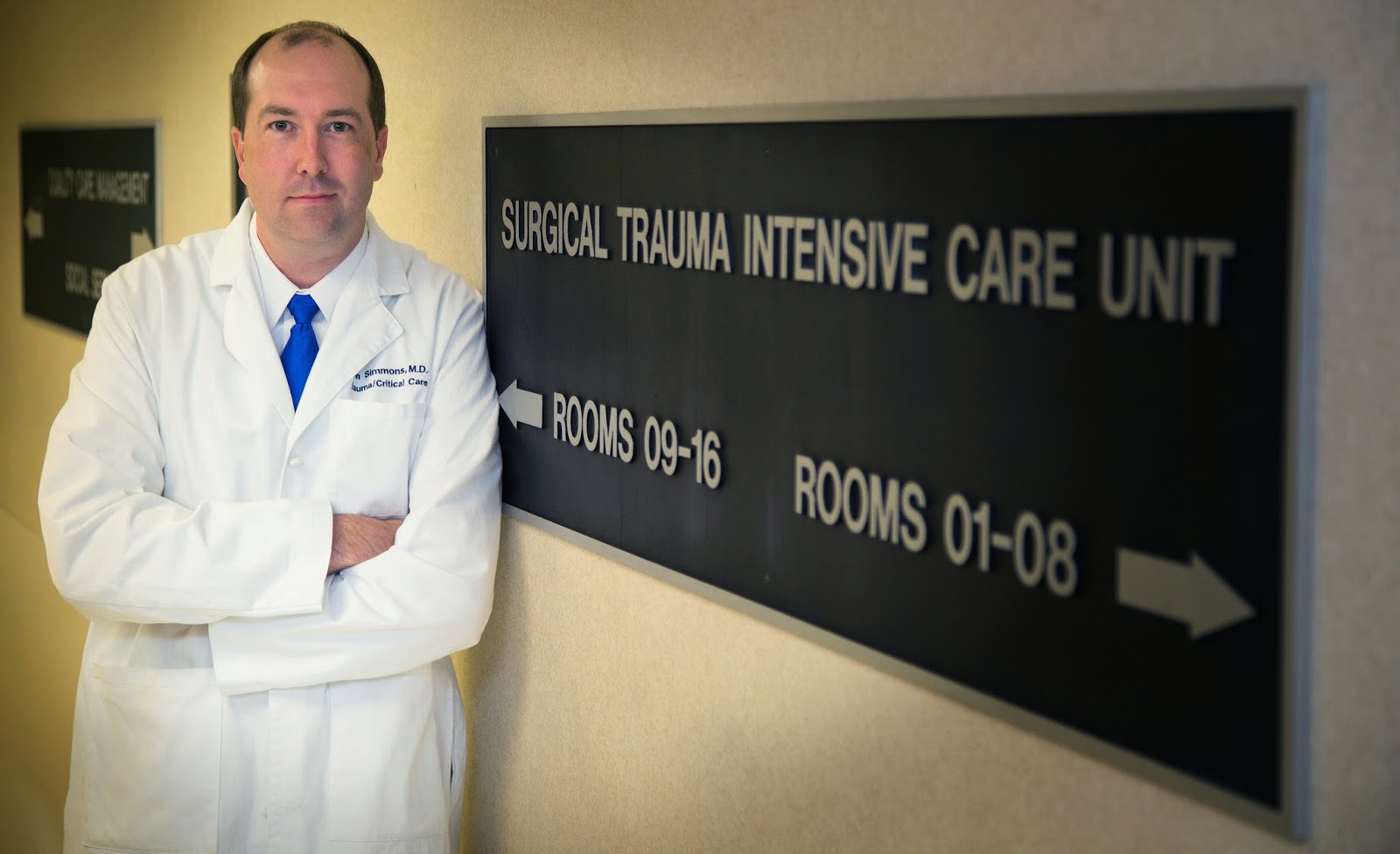 According to Dr. Simmons, more than 50 percent of trauma patients that receive massive blood transfusions develop severe lung inflammation that does not resolve and often leads to death or permanent disability.

“This becomes highly significant because the injuries that lead to the blood loss are often repaired,” Dr. Simmons said. “The only significant long-term injury is often the debilitating lung dysfunction that occurs after the blood transfusions.”

A recent study performed by Dr. Simmons at USA determined that blood transfusion products contain varying quantities of mitochondrial DNA fragments, which are very inflammatory to the lung.

“Our data also demonstrate the potential for a currently-available drug to effectively deplete the mitochondrial DNA from transfusion products,” he said. “Validating this concept would immediately improve the outcomes of patients with massive transfusions from severe trauma.”

Dr. Mark Gillespie, professor and chair of pharmacology and a member of the Center for Lung Biology at the University of South Alabama College of Medicine, serves as the mentor of this research project.

“I am honored to collaborate with Jon Simmons and his colleagues in the Division of Trauma and Surgical Critical Care on this project,” Dr. Gillespie said. “Jon, in particular, is one of the brightest and energetic young clinician-scientists with whom I’ve ever worked, and I have no doubt that his recent awards will impact positively on patient care.”

The second grant, the American Association for the Surgery of Trauma Research and Education Foundation Fellowship Award, totals $50,000. In this project, Dr. Simmons will attempt to answer a question that has puzzled physicians for decades: “Why does infection lead to organ failure despite the fact that antibiotics eradicate the bacteria almost immediately?”

Dr. Simmons said this research will provide the first observational evidence linking mitochondrial DNA release to the evolution of local and distant organ failure in patients after infection. It will also assist in identifying isolated targets for pharmacologic intervention in ventilator associated pneumonia – a type of hospital-acquired pneumonia that occurs in people who are receiving mechanical ventilation – and will provide the evidence necessary to immediately start clinical trials with a medication that is already approved by the FDA for the prevention of pneumonia.

"This close collaboration between the USA Center for Lung Biology and the USA Division of Trauma has placed our Trauma Center in the national spotlight,” Dr. Simmons said. “The patient care and research that occurs at the USA Medical Center is truly world-class, and I feel privileged to be a part of it."
Posted by Med School Watercooler at 10:26 AM No comments: 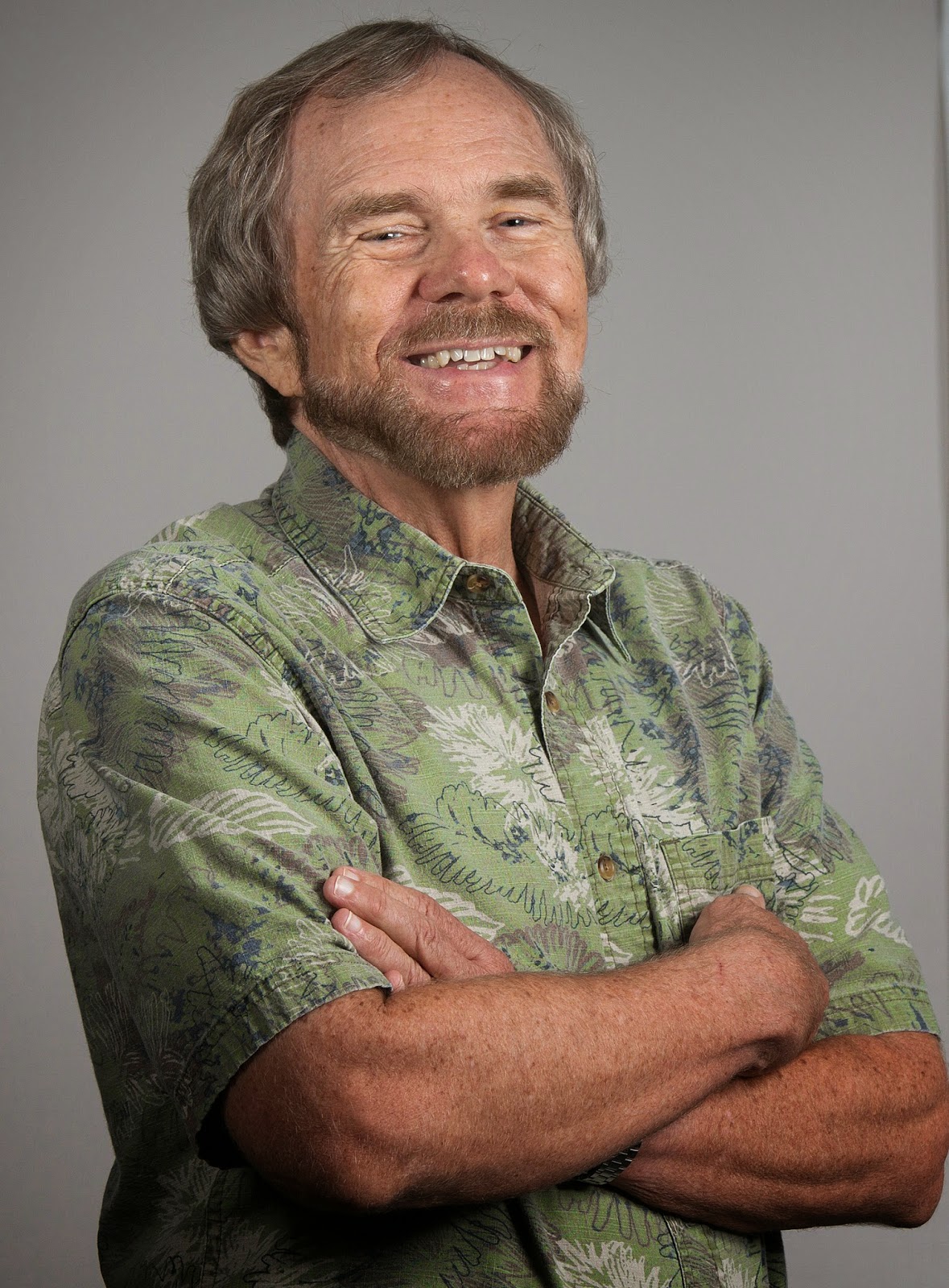 Dr. Glenn L. Wilson, chair of cell biology and neuroscience at the University of South Alabama College of Medicine, was recently selected to receive the 2014 Distinguished Service Award sponsored by the Medical Alumni Association. This honor recognizes a faculty member who has consistently demonstrated a commitment to advancing medical education and research.

Thirty-four years of medical graduate classes have benefited from his dedication to the study of the human body. Dr. Wilson joined the USA College of Medicine in 1980 as assistant professor with the department of anatomy. After a series of promotions, in 2002 he was named chair of the cell biology and neuroscience.

This academic year, Dr. Wilson announced his retirement but will continue his affiliation with the Alabama State Board of Anatomical Studies and guest teaching assignments.

To learn more about the Medical Alumni Association, visit http://www.usahealthsystem.com/alumniaffairs.
Posted by Med School Watercooler at 8:43 AM No comments: 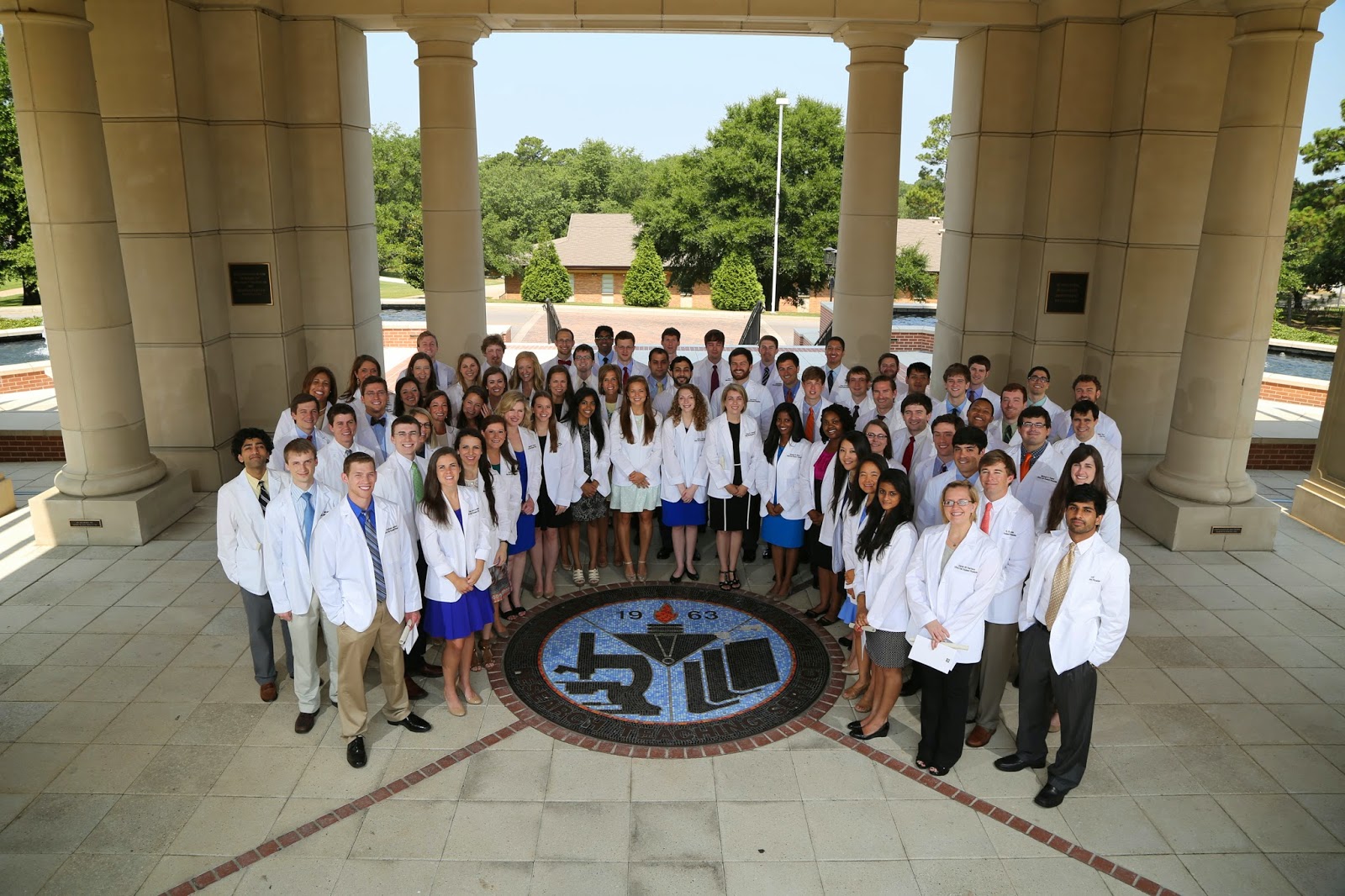 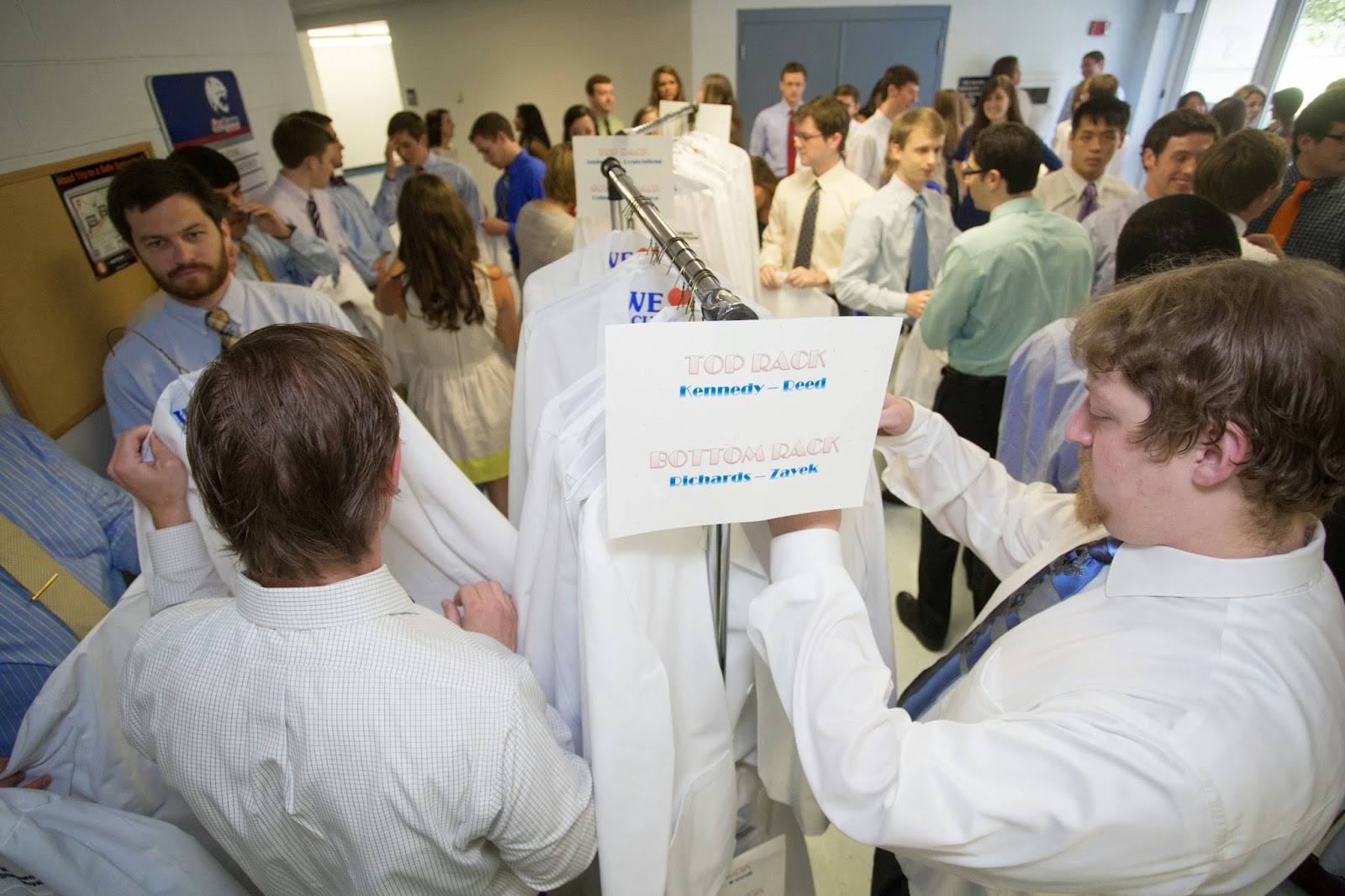 The University of South Alabama College of Medicine held its annual White Coat Ceremony for the Class of 2016 at the USA Mitchell Center on June 21, 2014.

During the ceremony, rising third-year medical students were cloaked with white coats, the traditional dress of physicians for more than 100 years. 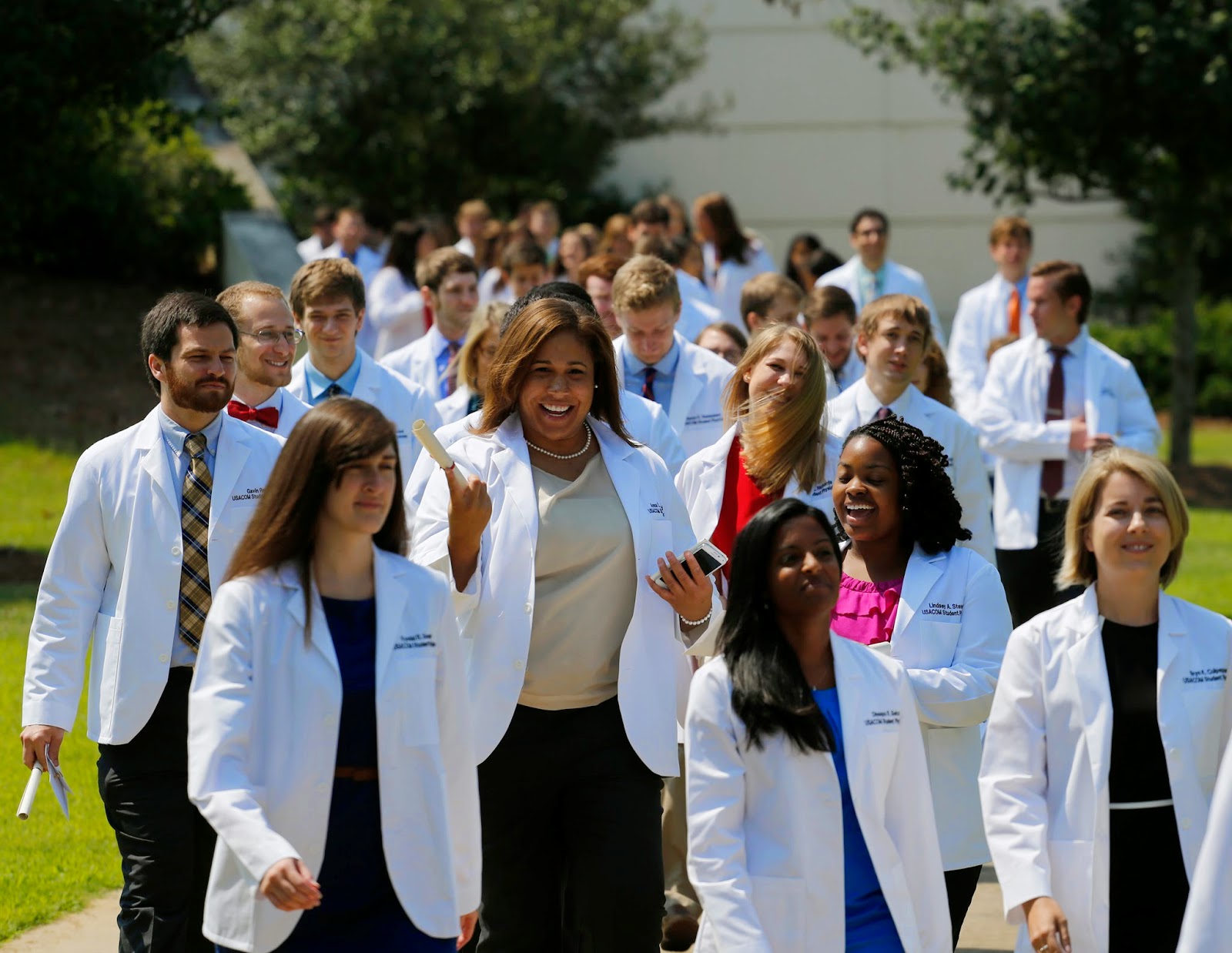 Posted by Med School Watercooler at 12:32 PM No comments: