Alabama's 2005 Professor of the Year to Speak at COM The next Distinguished Scientist Seminar will be presented by Dr. Guy Caldwell on May 20, 2010 at 4 p.m. in the Medical Sciences Building (MSB) auditorium.   His lecture is titled “Traversing a Wormhole to Combat Parkinson’s Disease.”
Dr. Caldwell is an associate professor in the department of biological sciences at the University of Alabama in Tuscaloosa, Ala. He received his undergraduate degree in biology from Washington & Lee University in Lexington, Virginia, in 1986 and his Ph.D. in cell, molecular and developmental biology from the University of Tennessee in Knoxville, Tenn., in 1993. Subsequently, he completed postdoctoral fellowships from the National Institute of Neurological Disease and Stroke at Columbia University in New York.
In 2001, Caldwell was named a Basil O'Connor Scholar of The March of Dimes Birth Defects Foundation for his research into the molecular basis of childhood birth defects of the brain. This work included establishing a new animal model for epilepsy.

Using a worm known as C. elegans, the Caldwell lab discovered that a protein called VPS41 prevented dopamine-producing neurons from dying. In humans, the death of dopamine neurons leads to tremors, slowness of movement and rigidity associated with Parkinson’s disease. Dr. Caldwell was selected as the 2005 Alabama Professor of the year in recognition of his dedication to undergraduate education.

The USA College of Medicine Spring Facutly Assembly meeting is scheduled for May 19, 2010, at 4 p.m. in the Second Floor Conference Room (Richard Room) at USA Medical Center.  For additional information, contact Dr. Todd Standley at tstandley@usouthal.edu .
Posted by Med School Watercooler at 3:07 PM No comments: 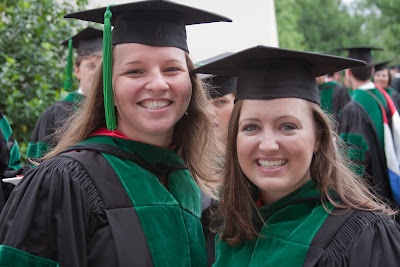 COM Class of 2010 Drs. Casey Cockrum (left) and Christina Cochran (right) smile as they walk into the USA Mitchell Center on May 8, 2010, for the University of South Alabama Spring Commencement.  Dr. Cockrum will continue her residency training in the combined medicine-pediatrics program at USA.  Dr. Cochran will join pediatric residency program at the Medical University of South Carolina in Charleston, S.C. 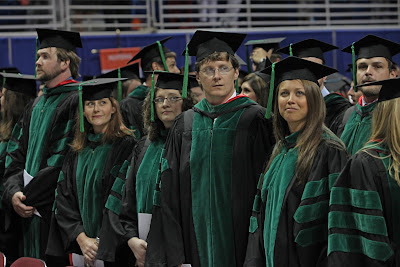 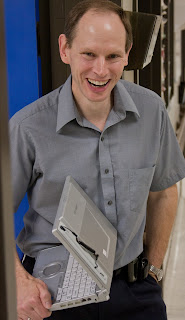 Dr. Robert L. Duffy (left), assistant professor of family medicine at USA, said the software will free up time to care for patients. The laptop device can be carried into the exam room, eliminating the need for paper charts.

“This clinic is a microcosm of everything else in the health system - one of the main reasons for piloting it here first,” Dr. Duffy said. "We wanted to get the overall view of the software in a clinic that houses a variety of specialties, such as adult care and pediatric care, and then move on to other areas."

Family Medicine is the first clinic with the USA College of Medicine that is in the process of implementing the software. According to Dr. Duffy, the clinic should be finished fine-tuning the system by the end of June. Then, it will be implemented in other USA clincal sites.
Posted by Med School Watercooler at 1:45 PM No comments: 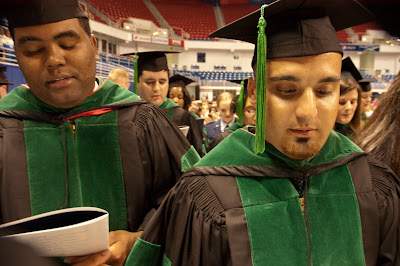 Moments after receiving their doctoral hoods, Drs. Marcus Bell (left) and Gautam Bhatia (right) read the Hippocratic Oath with classmates at the University of South Alabama College of Medicine's Honors Convocation on May 7, 2010, at the USA Mitchell Center.
Posted by Med School Watercooler at 2:48 PM No comments:

An art exhibit titled “Three Take on Texture” is now showing in the third floor gallery of the University of South Alabama Main Library.

The exhibit features the work of Lynda Smith Touart, medical illustrator for the University of South Alabama's College of Medicine, along with the ceramic work of Yuko Takushige Jordan and the pine needle basketry of Teri Odell.

The library is free and open to the public. Visit http://library.southalabama.edu/index.html for library hours.
Posted by Med School Watercooler at 11:16 AM No comments: