‘I’m Tackling Medical School Like I Tackled My Opponents’ 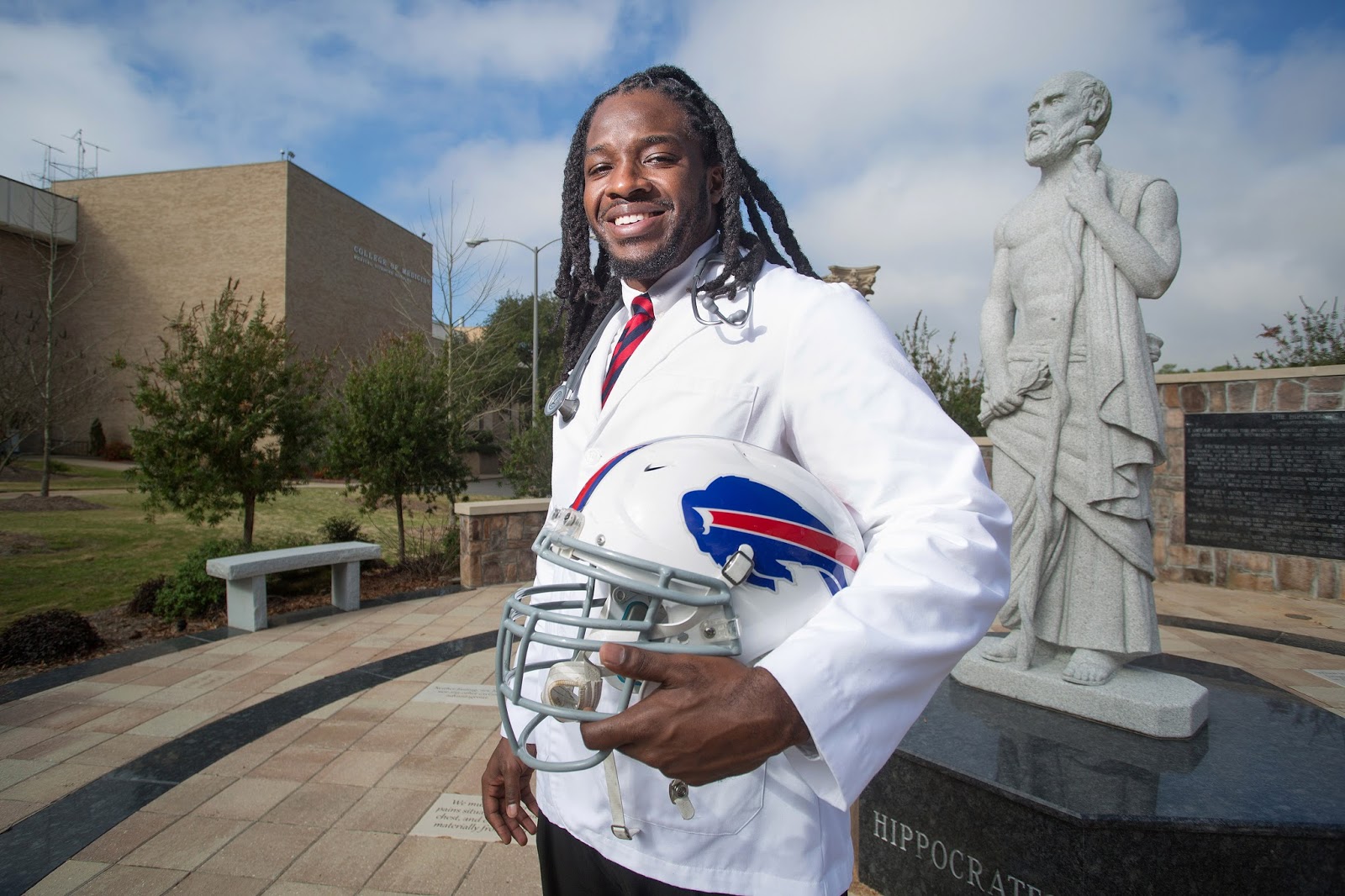 Just two days before the start of freshman orientation, Jeremy Towns’ journey to medical school at the University of South Alabama was interrupted when he was offered a contract with the National Football League. Two years later, he is now fulfilling his lifelong dream of becoming a doctor.

“I realized I wanted to help people at a young age,” Towns said. “One year, I dressed up as a doctor for Halloween. I remember asking my mom what I had to do to become a real doctor, and she told me that I had to work harder than anyone else.”

Towns took his mother’s advice to heart. He received his acceptance letter from the USA College of Medicine shortly after earning his undergraduate degree in sports medicine from Samford University in Birmingham, Ala., where he played football as a defensive lineman.

“I received my medical school acceptance letter the day before NFL pro-day,” Towns said. “My mother opened the letter and told me the great news. We were both so excited.”

With plans to attend medical school in place, Towns traveled to Dominica for a week-long mission trip. While traveling back home, he noticed a voicemail from a Washington Redskins scout. “Since the voicemail was a week old I thought I missed my opportunity and they moved on to the next person,” he said. “To my surprise, I called them back and they wanted to send me up there to do a workout in a few days.”

Ultimately, Towns was offered a free-agent deal with the Redskins and chose to postpone medical school.

After he left the Redskins, Towns was signed by the Buffalo Bills and the Philadelphia Eagles before he made his way to the USA College of Medicine. Towns said he is thankful for the opportunity to play professionally as it prepared him for the rigors of medical school.

Towns said his approach to medical school is to meet every challenge with overwhelming force, a strategy he often utilized on the field. “Playing defense taught me that you have to get back up every time you get knocked down,” he said. “It also showed me that I can do all of the preparation in the world, but at some point I have to play the game. Now, I use that same mentality by thinking of every test as my opponent. I have to tackle it."

As the first person to attend medical school in his family, Towns said he immediately felt at home during the interview process at the USA College of Medicine. “People suggested that some medical schools would not allow me to keep my dreads, but South welcomed me with opened arms,” he said. “I am always going to be thankful for the opportunity to be in the presence of such great people.”

Compared to professional football, Towns said the rigors of medical school are far more demanding but will be extremely rewarding.

“I love that USA is very serious about medicine and every students’ success,” he said. “To be able to walk into any professor’s office for help or clarification is amazing. I can tell that this is not a job they do just for a paycheck. They genuinely love coming to work every day.”

Although his professional football career temporarily delayed his childhood dreams of attending medical school, Towns said he never lost sight of his ultimate goal in life. “I have always wanted to impact the community through medicine,” he said. “And it all started with a Halloween costume."


‘I’m Tackling Medical School Like I Tackled My Opponents’ from USA Health on Vimeo.
Posted by Med School Watercooler at 2:39 PM 1 comment:

The USA College of Medicine Faculty Assembly meeting will take place May 25, 2017, at 4:30 p.m. in the first floor conference room at the Strada Patient Care Center.

The Strada Patient Care Center is located at 1601 Center St. in Mobile.

Dr. Steve Cordina, associate professor of neurology at the University of South Alabama College of Medicine and an interventional neurologist with USA Physicians Group, will present “Pediatric Neurointervention” for May’s pediatric grand rounds.

Dr. Cordina will discuss how to identify patients who would benefit from stroke intervention.

The event is open to faculty, staff and students at USA. A light breakfast, coffee and beverages will be provided. For additional information, contact Katie Catlin at kncatlin@health.southalabama.edu.
Posted by Med School Watercooler at 12:09 PM No comments: 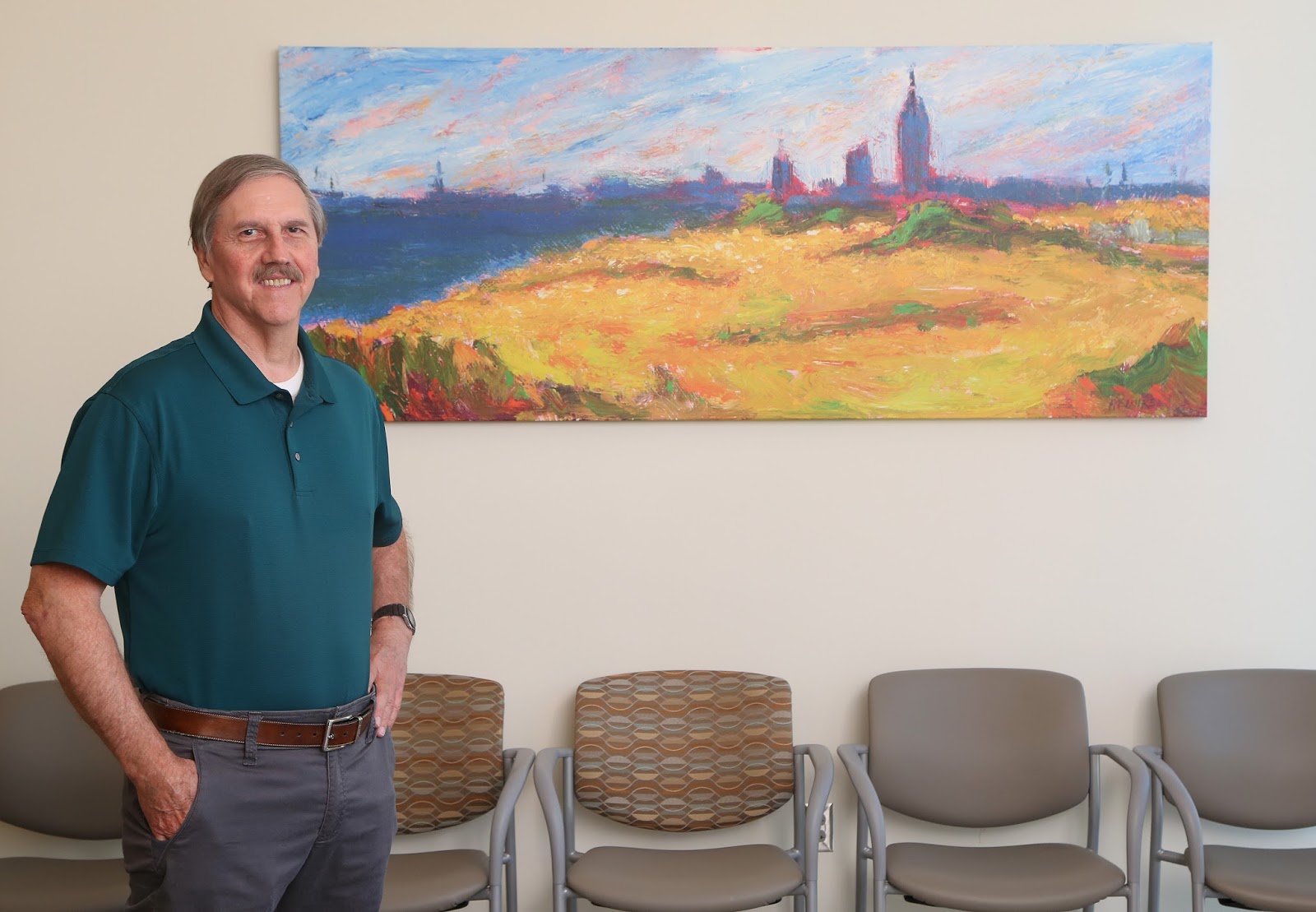 Several pieces of art are now on display in the waiting areas and hallways of the Strada Patient Care Center, creating an inviting and relaxing atmosphere for patients.

Vernon Reinike, a local impressionist artist, recently toured the Strada Patient Care Center to view his work, which is displayed on every floor of the building.

Reinike said he seeks to express the beauty and feeling of nature through his art. He works primarily in acrylic and oil to create impressionistic canvases of landscapes, still life and portraits.

“The pieces displayed at the Strada Center are all very calm and serene,” he said. “I hope my artwork will provide a moment of focus for the patients, helping to take their mind off of any worries, even if just for a second.”

Both patients and employees are enjoying the artwork seen throughout the building. “Everyone loves the painting of the koi pond,” said Joey Baggett, supervisor of radiology and teleradiology at the Strada Patient Care Center. The painting, named “Ann’s Pond,” is broken up into three separate canvases displayed down the length of the hall.

Ashton Hennig, who currently serves as an administrative resident for USA Health, said Reinike’s paintings of Mobile’s cityscape originally drew them to his art. One of his favorite pieces, “Mobile Skyline from Felix’s, Windy Day,” was placed in the radiology waiting area, which overlooks downtown Mobile. “We thought that this was the perfect spot for this painting because you can look out of the windows and see the same buildings that are in the painting,” Hennig said.

According to Reinike, the inspiration for this painting came about while eating at Felix’s Fish Camp. “I was looking out of the window, and I thought the view would make a great painting,” he said. “I asked the waiter for a pencil and paper and sketched it at my table.”

Both “Dauphin at Cathedral Square” and “Sunday Morning on Dauphin” are displayed in the first floor conference center at the Strada Patient Care Center. “We decided to put these paintings in the large conference room because we wanted to showcase Mobile,” Hennig said. “We have hosted local conferences in this room and hope to also host national conferences here in the future. We have received so many compliments on these pieces.”

The Strada Patient Care Center features 10 of Reinike’s pieces, some of which are also on display at the Mobile Museum of Art.

Learn more about Vernon Reinike here.
Posted by Med School Watercooler at 9:18 AM No comments: 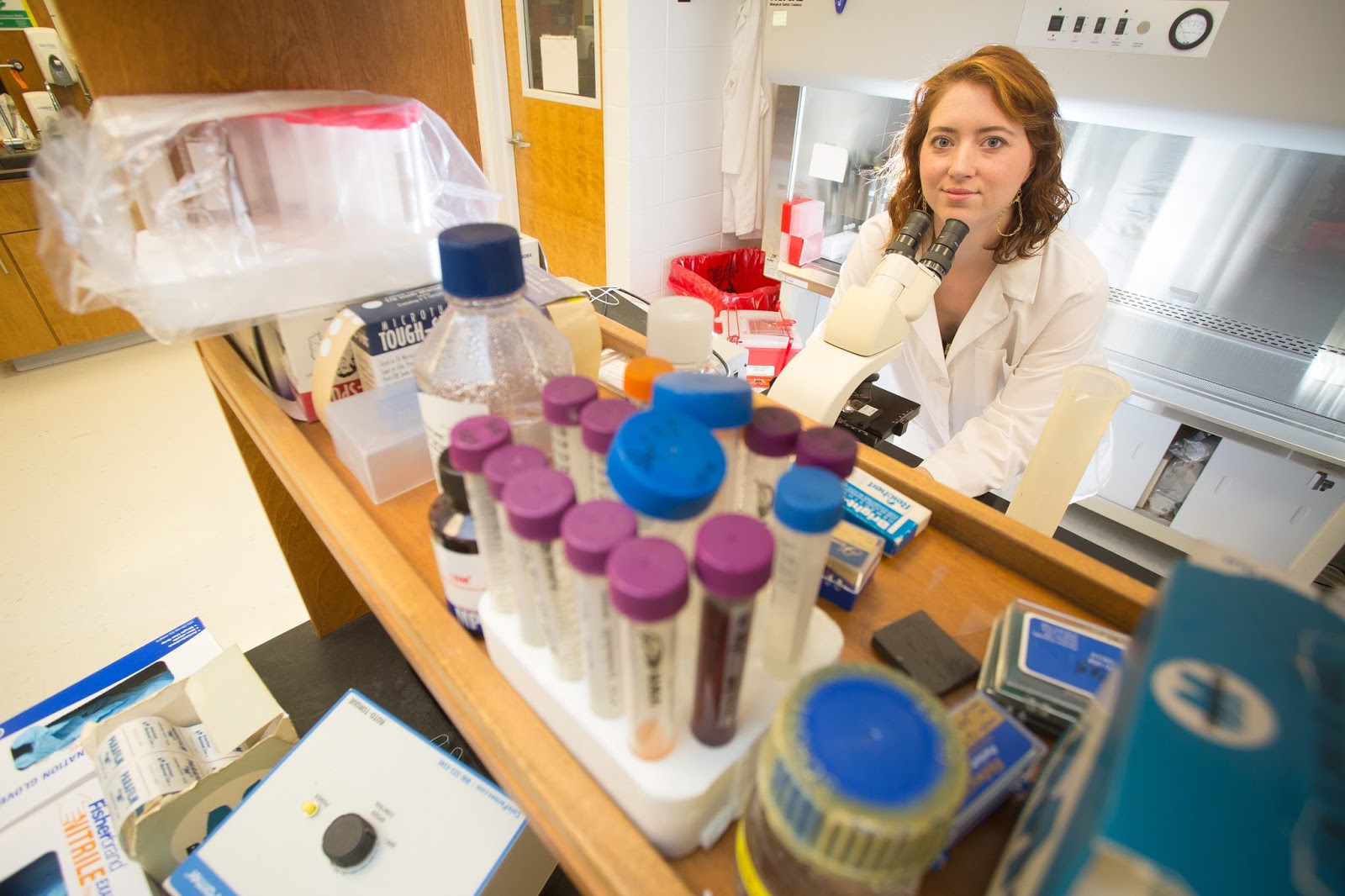 Steffani Fitzpatrick, a basic medical science student at the University of South Alabama College of Medicine, was awarded a National Eye Institute travel grant from the Association for Research in Vision and Ophthalmology (ARVO).

The grant was used to assist with travel funds to this year’s 2017 ARVO annual meeting in Baltimore, Md. Travel grants are awarded to investigators who have an accepted abstract with a high score for the ARVO annual meeting and whose research findings are considered to be of high interest to the vision and ophthalmology research community.

“Our goal is to better understand how the body responds to HSV-1 during an eye infection so we can identify possible vaccine targets,” Fitzpatrick said. “This project is important because HSV-1 is the leading cause of infectious blindness in developed countries.”

According to Fitzpatrick, current treatment options are limited to a few anti-viral medications that limit the spread of the virus, but there are no vaccines available to eliminate the virus.

The ARVO Annual Meeting provides a unique opportunity for trainees and early career investigators to discuss their research with leaders in their fields and receive encouragement to continue their work. The meeting is the largest gathering of eye and vision researchers in the world, attracting more than 11,000 attendees from more than 75 countries. Learn more here.
Posted by Med School Watercooler at 9:16 AM No comments: