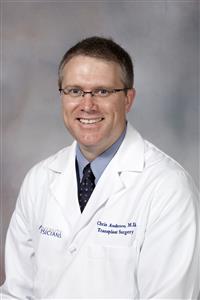 Both lectures are open to the public and are made possible through the Emmett B. Frazer, MD., F.A.C.S., and Milton M. Leigh, M.D., F.A.C.S., Memorial Endowments at the University of South Alabama Department of Surgery.

His second lecture, “Development of HPB Surgery in a Rural State,” will be presented on Friday, Nov. 3, 2017, at 7 a.m. in the USA Medical Center second floor conference room.  Following the lecture, brunch will be served in the Mastin Professional Building in room 2018 and Dr. Anderson will critique selected case presentations.

Dr. Anderson’s research interests focus on the use of steatolic fatty livers in transplantation. In 2008, he received the American Society of Transplant Surgeons-Astellas Faculty Development Award to investigate the mechanisms of increased cold ischemia and reperfusion injury in transplanted steatotic livers. He subsequently received a grant from the National Institutes of Health to research the same conditions.

This annual memorial lectureship is given to honor the legacies of Dr. Emmett B. Frazer and Dr. Milton M. Leigh as leaders in clinical service and graduate surgical education in the Mobile community.

For more information contact the USA Department of Surgery at (251) 445-8230.
Posted by Med School Watercooler at 3:34 PM No comments: 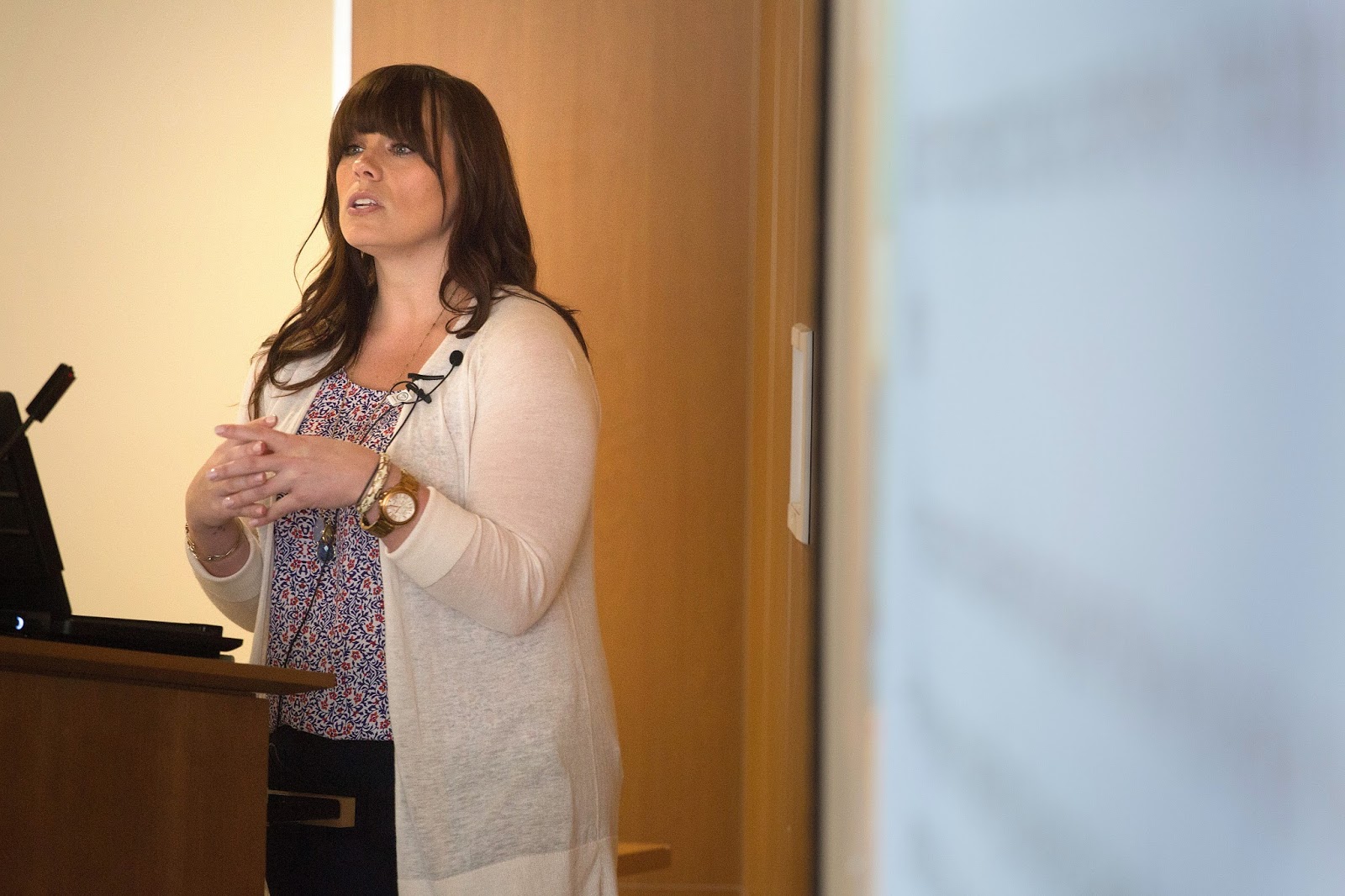 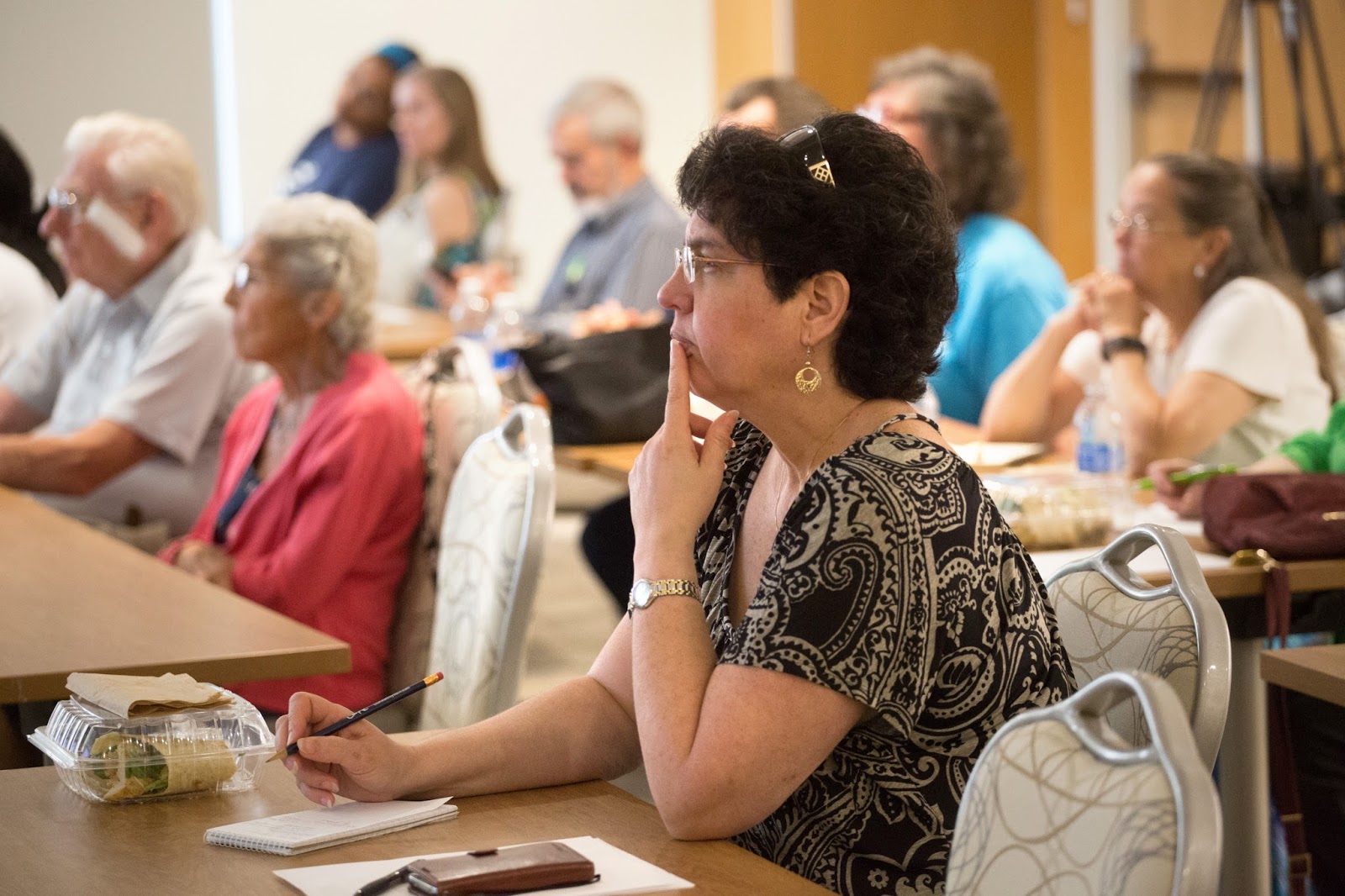 During the talk, she discussed the interactions of common medications and supplements, and described how environmental factors can affect medication safety and effectiveness.

Dr. Richard Honkanen Collaborates with Leading Researchers Across the Globe in Search of Treatment for Rare Disease 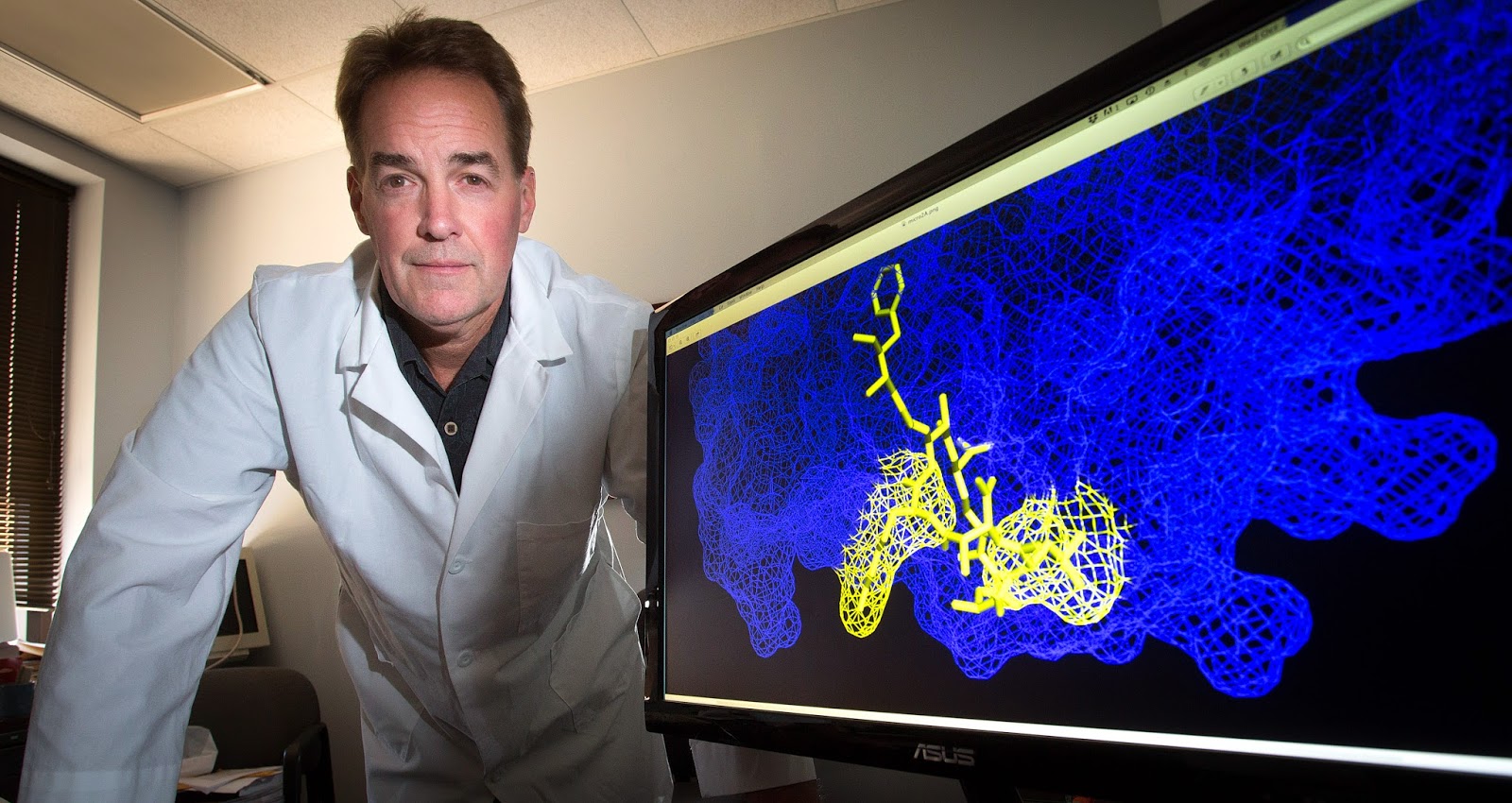 Dr. Richard Honkanen, professor of biochemistry and molecular biology at the University of South Alabama College of Medicine, is one of 12 leading researchers from around the world chosen to take part in a first-of-its-kind research project to study PPP2R5D gene mutation in children.

PPP2R5D is a gene involved with cellular growth and development throughout the human body, especially the brain and neurodevelopment. Mutations in this gene have recently been described as a cause of neurodevelopmental disorders that has symptoms including autism, intellectual disabilities, behavioral challenges and seizures. PPP2R5D may also play a role in Alzheimer’s disease and certain forms of cancer.

The identification of these mutations and their impacts presents an opportunity to conduct foundational research aimed at developing therapeutic treatments or possibly reversing the impacts of the mutations.

“Jordan was one of the first children to be diagnosed with the PPP2R5D mutation,” Dr. Honkanen said. “After the diagnosis, no one could explain the disorder because only a few people in the world even knew what PPP2R5D is and none of us were aware of the genetic link.”

In search of answers, Jordan’s father started Jordan’s Guardian Angels. The nonprofit organization heavily relied on the expertise of Dr. Wendy Chung, world-renowned medical detective and geneticist at Columbia University Medical School, who often takes the most difficult cases. Together, they assembled a diverse team of leading researchers from across the world in an effort to find the mechanisms behind the mutation and determine if a cure is possible.

Dr. Honkanen said he was offered to take part in the research project because of his extensive knowledge on protein phosphates. “I have been working on protein phosphates for over 25 years and the USA College of Medicine has an international reputation in the field,” he said. “Dr. Wendy Chung wanted to learn more about PPP2R5D, so when she found the mutation in PPP2R5D – a gene encoding phosphate regulator proteins– she called me and others that study phosphatase to learn more about what this protein does.”

The team of researchers, including Dr. Honkanen, is comprised of human geneticists, neurologists, psychologists, biochemists, protein modelers, model organism researchers and cancer biologists. They are now in the beginning stages of their collaborative research.

Currently, there are 41 children known in the world who have been diagnosed with mutations in PPP2R5D and are experiencing significant intellectual disability, autism and other physical symptoms. In August, Jordan’s Guardian Angels brought 25 of the families from around the world to Chantilly, Va., for a family conference. The families donated blood samples, which helped the research team to begin their investigation.

As a basic science collaborator on the team, Dr. Honkanen’s role is to help determine how the mutations alter the activity of the normal protein. “The USA College of Medicine also has expertise in drug development for phosphates, so we will explore the development of an assay that can identify compounds that bind to the variant protein but not the normal protein,” he said.

According to Dr. Honkanen, before the team can begin searching for a cure, they first need to determine exactly what needs to be fixed. The research team’s ultimate goal is to develop new pharmacological interventions, as some neurodevelopmental disorders are reversible.

Although the team is studying the mutations specifically for their impact on intellectual disability and autism spectrum disorder, there are other possible byproducts that may be derived from this research including significant clues or advancements in the knowledge of Alzheimer’s disease and cancer.

Researchers estimate the study will take six to 10 years to complete, costing upwards of $15 to 20 million. Jordan’s Guardian Angels is leading the funding for the large-scale research project. “The foundation promotes the research team as the best of the best in the world,” he said. “That is flattering to me and also helps to place USA’s research on a global stage.”

Founded in 2003, Jordan’s Guardian Angels is a nonprofit organization with the goal of helping to improve and bring joy to the lives of children and families in the Coachella Valley and beyond.

Posted by Med School Watercooler at 11:55 AM No comments: 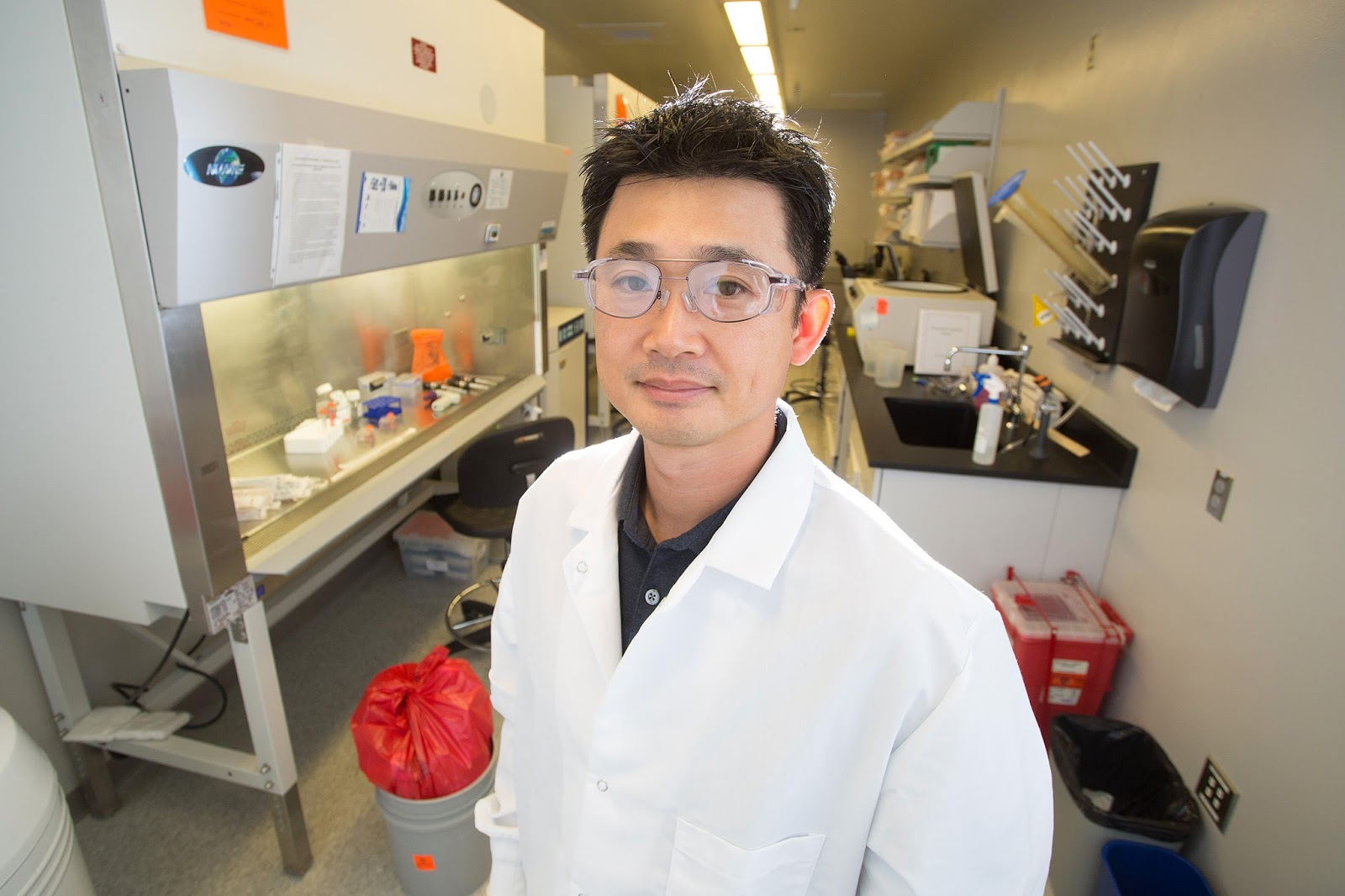 Dr. Jin Hyun Kim recently was appointed assistant professor of microbiology and immunology at the University of South Alabama College of Medicine.

Prior to his appointment at USA, Dr. Kim served as an associate research biologist in drug development at Southern Research in Birmingham, Ala., where he extended his experience to support human clinical trials for new vaccines against influenza under Good Laboratory Practice (GLP) regulations.

“Dr. Kim provides additional expertise to our expanding research efforts in viral diseases, especially for viruses that are a potential threat to the gulf coast area,” said Dr. David Wood, professor and chair of microbiology and immunology at the USA College of Medicine. “His experience in the private sector and GLP training will be invaluable to our vaccine development efforts.”

Dr. Kim earned his doctor of veterinary medicine degree and his master’s degree in veterinary pathology from Konkuk University in Seoul, South Korea. He earned his doctor of philosophy degree in virology in Dr. Kawaoka’s lab at the University of Wisconsin-Madison where he studied the molecular mechanisms of how highly pathogenic avian H5N1 influenza virus adapts to humans using model systems.

He also completed a post-doctoral research training program at the University of Michigan, Ann Arbor College of Pharmacy where he studied HIV-1 infection of CD4+ T cells and quantified functional envelope glycoproteins on the surface of a single HIV-1 virion. Results from these studies supported HIV-1 vaccine development efforts.

“Dr. Kim is a welcomed addition to the department and will be instrumental in extending the research and capabilities of the LID for collaborations both internal and external to USA,” said Dr. Jonathan Rayner, associate professor of microbiology and immunology and director of the Laboratory of Infectious Diseases at the USA College of Medicine.

Through the University of South Alabama Center for Healthy Communities, Community Health Advocates (CHAs) are hosting the 6th annual Rainbow Cancer Walk-A-Thon on Oct. 27, 2017, from 6 p.m. to 11 p.m. at Revelation Missionary Baptist Church.

Gloria Carter, a CHA with the USA Center for Healthy Communities, started the event as a way to memorialize lives lost to cancer, celebrate cancer survivors and educate the community on the different forms of cancer.

At the event, representatives from the Board of Health and the American Cancer Society will be available to provide cancer education.

Community outreach is a core function of the USA Center for Healthy Communities. The CHA program is comprised of volunteers that support the development of future health care providers and researchers. The volunteers provide health education to their communities with the hopes of reducing health disparities in underserved communities.

The Center for Healthy Communities is the lead entity within the University for coordinating community education, research, public service and health activities to help eliminate health disparities, foster access to health care for underserved populations and enhance the capacity of individuals to better participate in decision making about their health.

The event is free and open to the public. For more information, call 471-7708.
Posted by Med School Watercooler at 10:11 AM No comments: