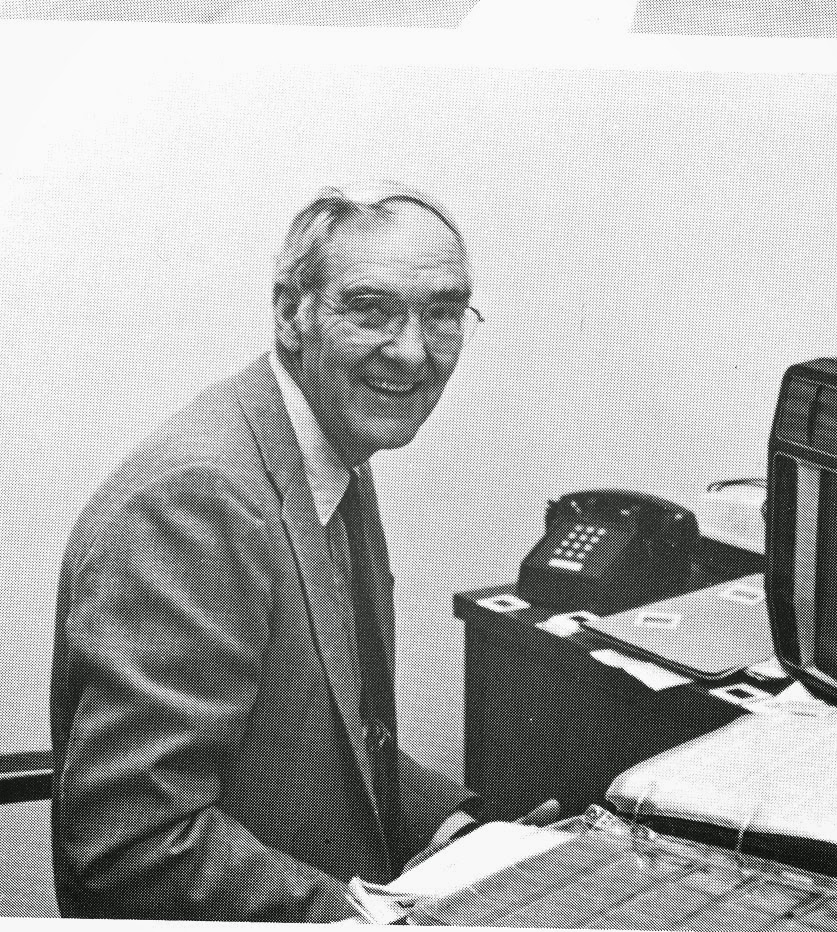 Dr. Hollis J. Wiseman, emeritus professor in the department of pediatrics at the USA College of Medicine, passed away on Oct. 28, 2014. He was 87 years old.

"Dr. Wiseman was one of the early pioneers within the College of Medicine in developing the curriculum for our medical students and providing unique opportunities for training in pediatrics," said Dr. Samuel Strada, dean of the USA College of Medicine.

A native of Mobile, Ala., Dr. Wiseman graduated from Murphy High School and earned his undergraduate degree from the University of Alabama in Tuscaloosa, Ala. He completed two years of medical school at Louisiana State University School of Medicine before earning his medical degree at Harvard Medical School in Cambridge, Mass., in 1952. Dr. Wiseman completed his residency in pediatrics at Children’s Hospital in Cincinnati, Ohio, and an international rotary fellowship at Children’s Hospital at the University of Zurich in Zurich, Switzerland.

“Dr. Wiseman was ahead of his time in envisioning a regional care network for the care of critically ill infants in Alabama,” said Dr. David Gremse, professor and chair of pediatrics at the USA College of Medicine.

Dr. Gremse trained under Dr. Wiseman when he was a medical student and resident physician at USA. “He was a role model for all of us – he set very high standards for himself and those that worked with him. He was very inspiring and he made you want to do your best to take care of the premature infants in the NICU.”

Dr. Wiseman has received numerous awards, including the American Academy of Pediatrics Award for Leadership as Chairman of the Perinatal Advisory Committee; the Alabama Perinatal Association Award for Outstanding Perinatal Services; the Alabama Hospital Association’s Distinguished Service Award; and Endowed Chair, department of pediatrics, USA College of Medicine. He was also named one of 50 outstanding faculty members by the USA Faculty Senate.

Dr. Wiseman received an honorable discharge in 1946 following his service in the U.S. Naval Reserve. In addition, he volunteered during a 2-month expedition with the Hospital Ship Hope in Brazil in 1973 and was a Project Hope Neonatal Consultant to Egypt in 1978.

Each year, the USA College of Medicine awards the Hollis J. Wiseman Award for Excellence in Pediatrics to the medical graduate of USA who during the pediatric clerkship best exemplified Dr. Wiseman’s outstanding qualities.

Dr. Wiseman was preceded in death by his wife, Janice “Teko” Wiseman. She was known for her work in the library systems in Mobile and Fairhope, for her part in the founding of Keep Mobile Beautiful and for efforts to organize bike and walking trails in Baldwin County.

A memorial service will be held at Dauphin Way United Methodist Church on Friday, Oct. 31, 2014, at noon. Visitation will be at 11 a.m. in the Fellowship Hall at the church.
Posted by Med School Watercooler at 12:42 PM No comments: 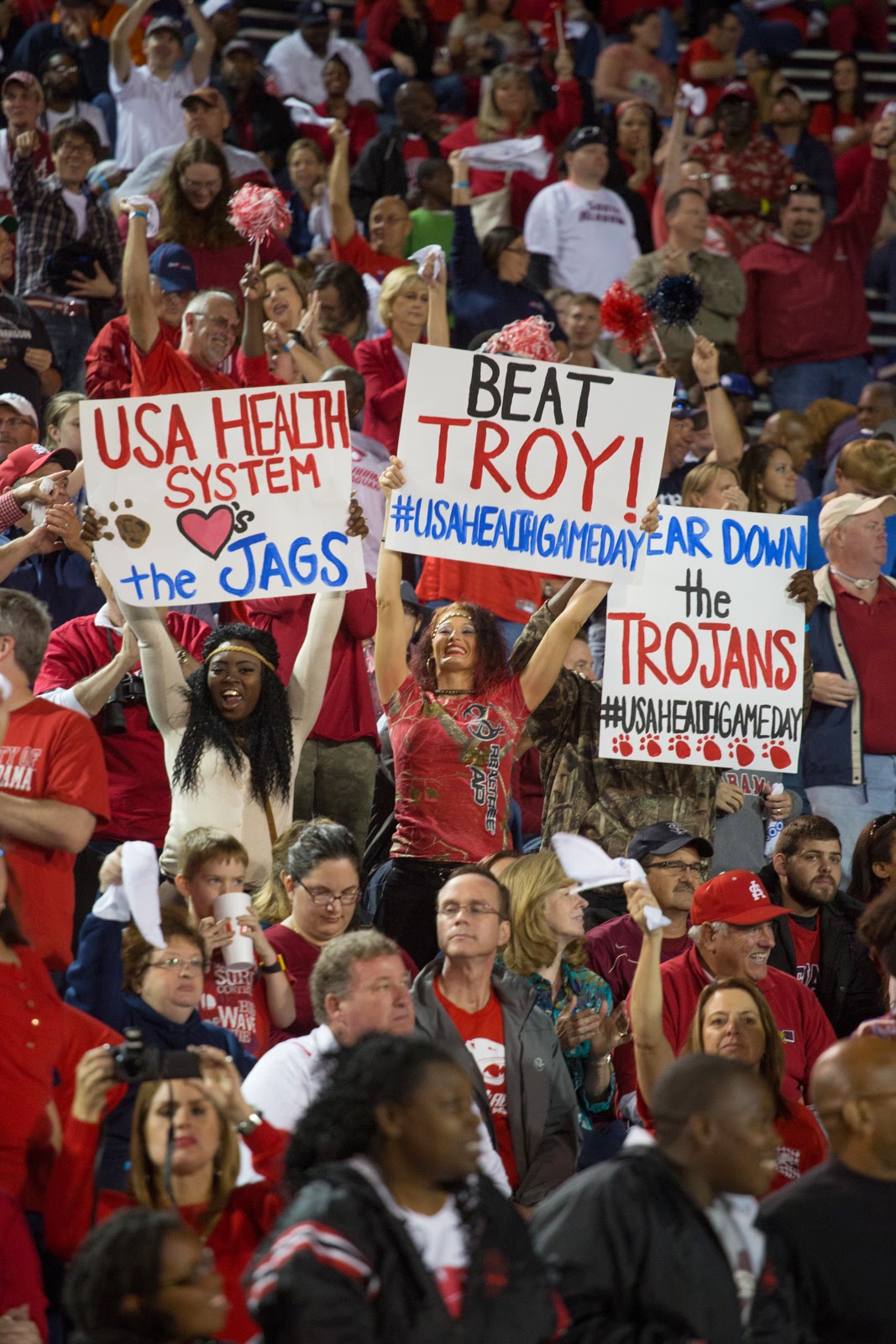 The University of South Alabama Health System recently showed appreciation to its employees at the USA Jaguars vs. Troy University football game on Oct. 24, 2014.

Prior to the game, employees enjoyed a tailgate dinner provided by Sonny's BBQ. Several Health System employees were selected to walk onto the field during the game to be recognized.

Click here or watch the video below to view more photos from the event. 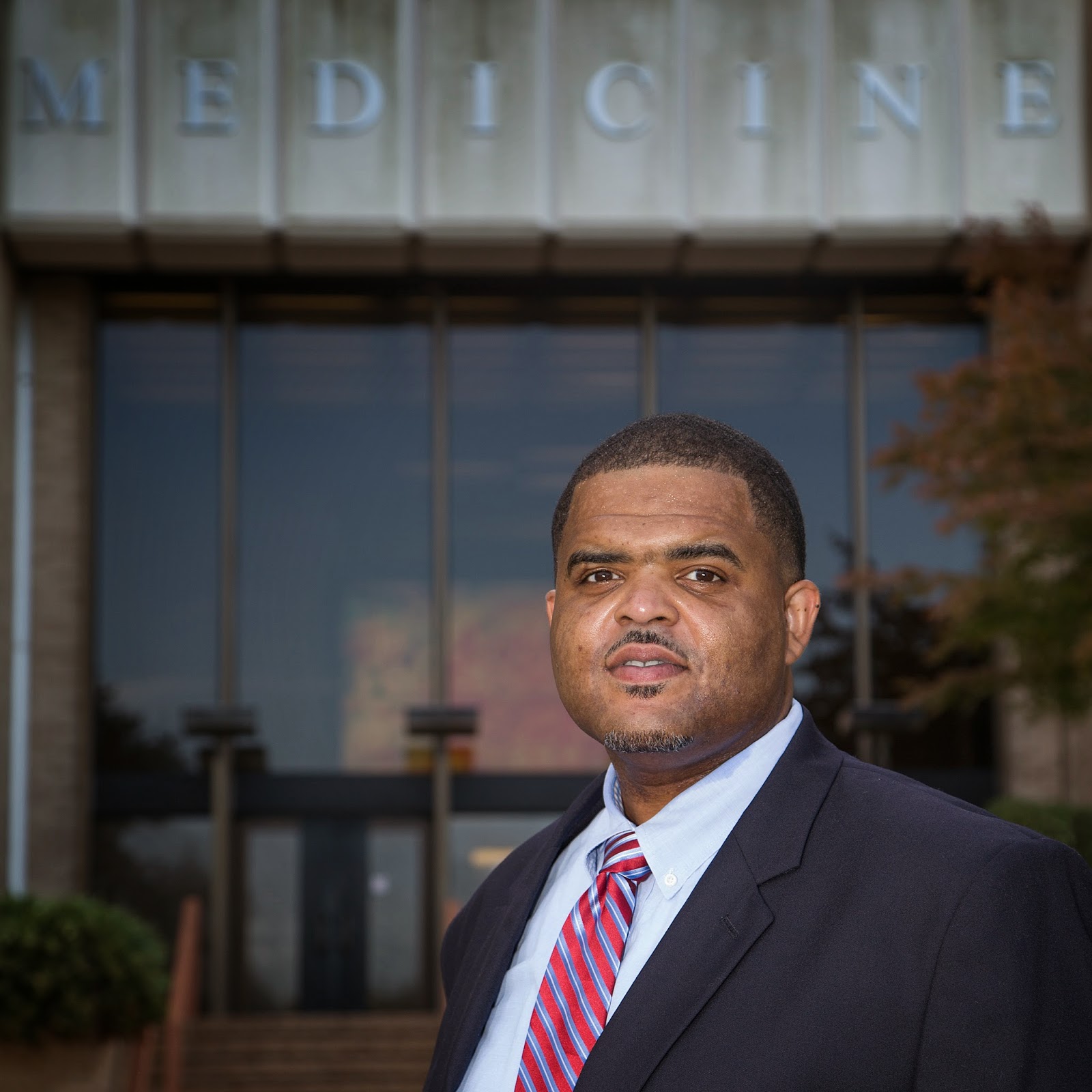 Frank Lucas was recently appointed the associate registrar for the University of South Alabama College of Medicine.

Lucas earned his bachelor of science degree in business administration at the University of Mobile and is currently pursuing a master’s degree in liberal arts with a concentration in leadership and ethics at Spring Hill College.

Posted by Med School Watercooler at 11:15 AM No comments: 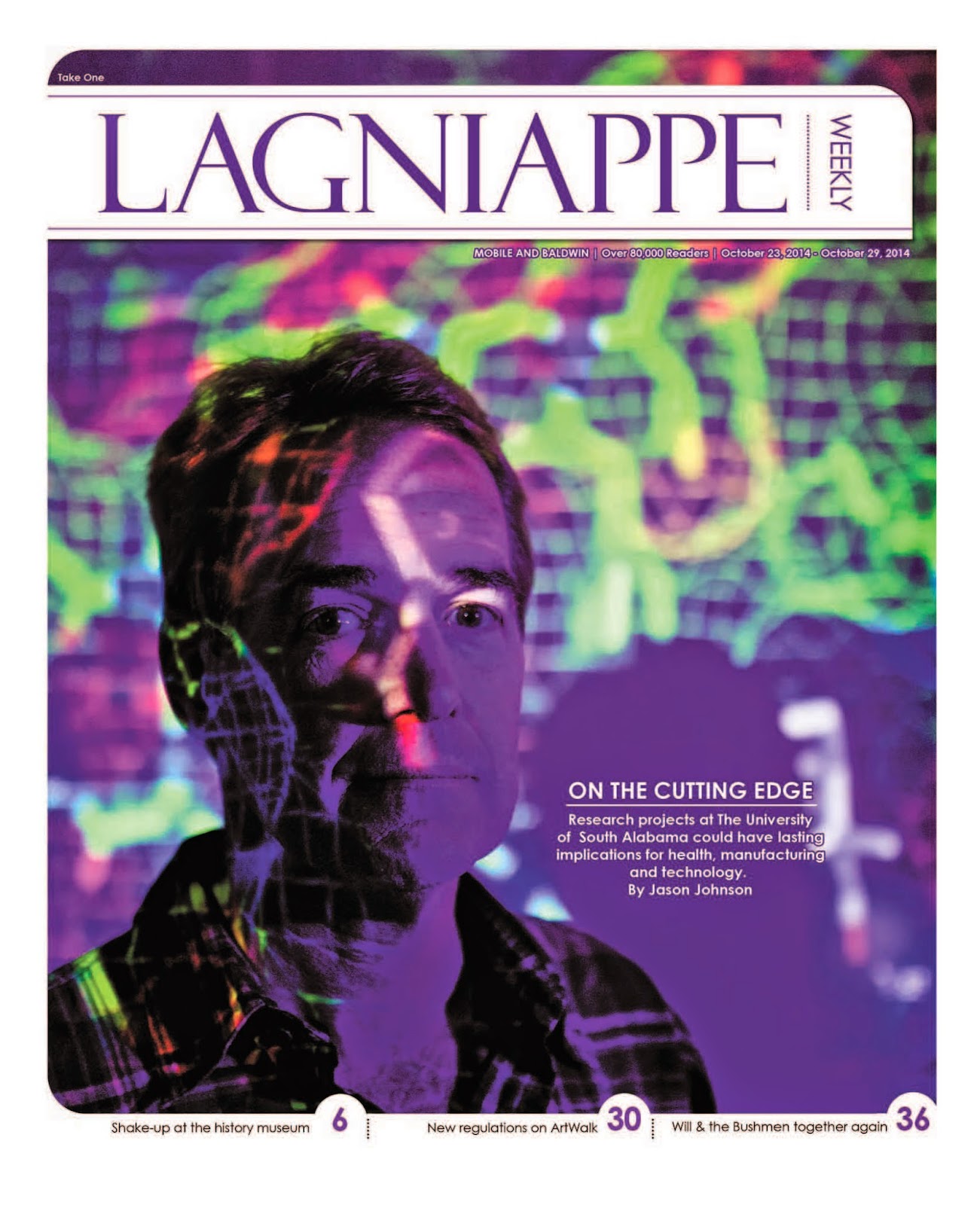 Two University of South Alabama College of Medicine research projects were featured in the Oct. 23rd issue of Lagniappe.

Dr. Richard Honkanen, professor of biochemistry at the USA College of Medicine, was featured on the issue's cover. The article includes an overview of Dr. Honkanen's research involving the PP5 protein inhibitor. The article also mentions Dr. Thomas Rich, associate professor of pharmacology, and his work on real-time hyperspectral imaging.

Posted by Med School Watercooler at 10:08 AM No comments: 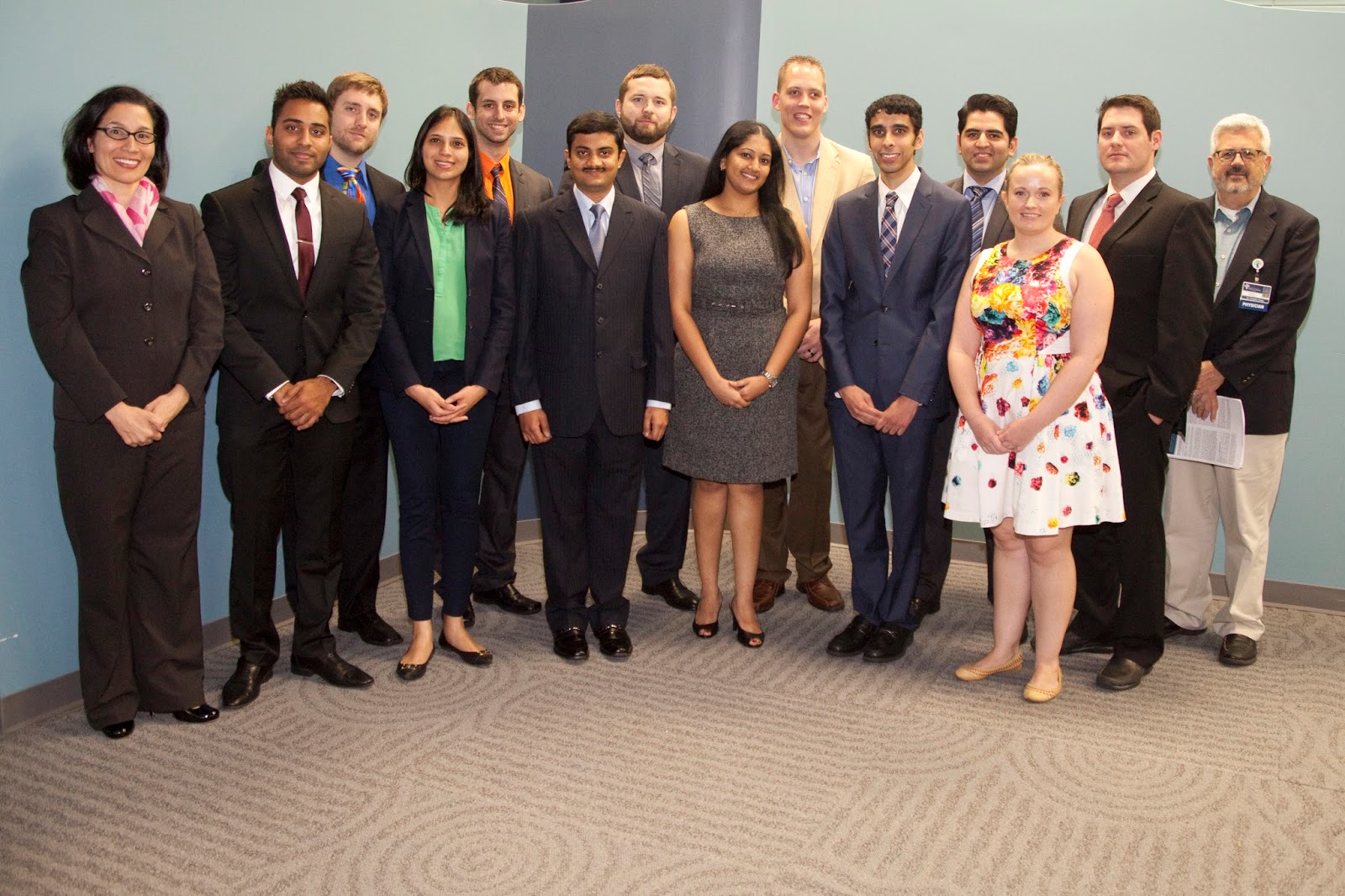 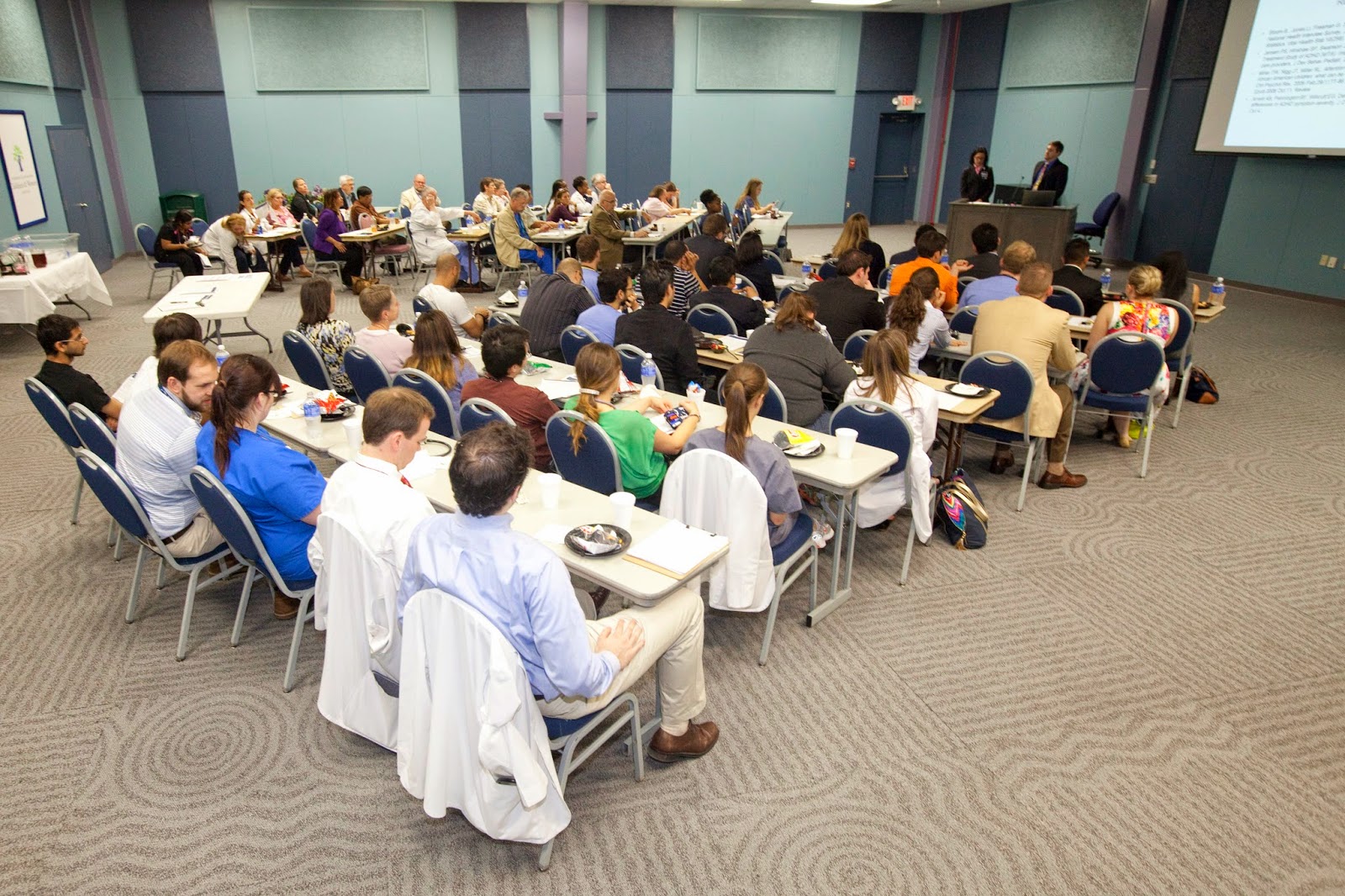 The University of South Alabama Department of Pediatrics hosted its 12th annual Residents Day on Oct. 17, 2014.  At the event, 12 senior residents in the pediatrics residency program presented their scholarly work to fellow residents, faculty and students.

Dr. Rosina Connelly, associate director of the pediatrics and residency program and associate professor of pediatrics at USA, said the program requires scholarly activity in one of three options: research, quality improvement or community advocacy projects.

“It is a great opportunity to foster scholarly work and collaboration between residents and faculty within the department,” Dr. Connelly said. “Participation in scholarly activities furthers the medical career for residents who are pursuing fellowship training by helping them become familiar with scientific methodology and research procedures.”

Many senior resident projects have been and will be presented at the American Federation for Medical Research's Southern Regional Meetings in New Orleans.

The Department of Pediatrics bestows the Charles Jay Hoff Award for excellence in scholarly activity to the resident and his/her faculty adviser with the best scholarly work project, as chosen by evaluations from faculty members in attendance during the Pediatric Residents Day. The recipient of this award is announced at the end of the academic year.

To view more photos from the event, click here.

The residents' abstracts can be viewed here.
Posted by Med School Watercooler at 10:07 AM No comments: 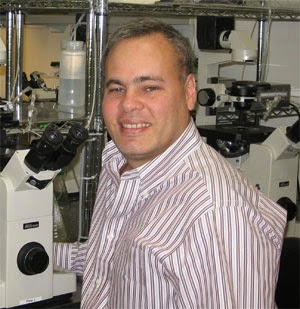 The next Distinguished Scientist Seminar at the University of South Alabama College of Medicine will feature Dr. Jose F. Perez-Zoghbi, assistant professor of physiology at Texas Tech University Health Sciences in Lubbock, Texas.

The lecture, titled “Regulation of Smooth Muscle Contraction in Small Airways and the Potential Use of Flavonoids to Treat Asthma,” will take place Nov. 6, 2014, at 4 p.m. in the first floor auditorium of the Medical Sciences Building on USA’s main campus.

To learn more about Dr. Perez-Zoghbi, click here.
Posted by Med School Watercooler at 10:05 AM No comments: