It’s no secret that medical school can be a costly investment. Today, medical school graduates leave with more than just a degree and an eagerness to begin residency training – on average, they also leave with $200,000 in student loan debt.

Practicing good money habits early is important so medical school graduates can spend more time focusing on the practice of medicine and less time worrying about their personal finances.

In March, Dr. Caleb Butts, a chief surgery resident at the University of South Alabama, paid off his medical student loans in full just four years and 10 months after graduating from the USA College of Medicine.

Dr. Butts and his wife chose the latter, wanting to pay them off as quickly as he could. “We knew we didn’t want to be surrounded by debt,” he said. “We wanted to be different.”

From the beginning, Dr. Butts and his wife, Tricia, made it their mission to borrow as little as they could for tuition and to pay off what they did borrow as quickly as possible. He said the key to paying off debt is to stay disciplined and to have a goal in mind.

“Our goal was to be able to have flexibility to allow our family to do the things that were important to us – things like adoption and giving back to others,” Dr. Butts said. “We realized that once we became debt free, we would have the freedom for options.”

Last month, Dr. Butts presented “Real Talk about Student Loans,” to current USA medical students, explaining how student loans can negatively impact their life and providing tips on how to pay the loans off early.

Dr. Butts recommends medical students address student loans early on. “I know there are a lot of things going on when you’re a medical student, but it is extremely important to be actively involved in your finances,” he said.

One survey he discussed showed that nearly half of academic attending surgeons said their educational debt still affects their quality of life and 35 percent of them said it places a significant strain on the relationship with their significant other.

“Your educational debt affects your happiness, your relationships and your family,” Dr. Butts said. “It seems daunting, but the earlier you start thinking about these things, the easier it is. Treat it as being one more thing you must learn while in medical school.”

During medical school and residency, Dr. Butts and his wife, a former teacher, made paying off debt a priority. They lived below their means, created a budget and placed extra money they earned toward the student loans.

Over time, small changes make a big impact. “Budgeting helped us find extra money to put toward the loans,” he said.

The Butts’ learned to live off of one income by keeping their living expenses low. “The average family in the U.S. makes $40,000 a year. My wife was a teacher, making about that much. If the average family could do it, we knew we could, too.”

Also during that time, the Butts’ adopted two children, Abby and Joshua. Two days after they brought Joshua home, they found out they were pregnant with their third child, Ella.

“Luckily, because we learned to live off of one teacher’s salary, we had paid down my student loans and had enough flexibility within our budget to be able to afford adoptions,” he said. “By making that right decision early, we were able to do something that we really wanted to do. We put money into things we valued – like family – and we did it intentionally.”

To prepare for Dr. Butts’ next step in his medical training – an acute care surgery fellowship at Wake Forest University in Salem, N.C. – the family sold their house and decided to use that money to pay the last payment on their student loans. “It was such a relief and really awesome because we were totally debt free,” he said.

Dr. Butts suggests the following tips for medical students who want to dump their debt:

1.    Begin with the end in mind.
If you don’t know where you’re going, you are never going to get there. If you don’t have a goal in mind, you are never going to reach it.
2.    Budget, budget, budget.
If you do a zero-based budget every month, you’ll be able to do more with your money.
3.    Live within your means.
Don’t feel social pressures to live a lifestyle commiserate with being a physician.
4.    Be disciplined and intentional.
Use extra money from raises, side jobs or skills to pay down your debt.
5.    Avoid attaching your wealth to things, especially things that lose value – like vehicles – and grow into your salary slowly.

Most importantly, Dr. Butts said for medical students to think about and always remember why you chose a career in medicine. “Money problems lead to unhappiness, and unhappiness leads to burnout. Practice good money habits so you can focus on the real things that matter – things like being a good doctor, a good mother or father, a good spouse and a good community member.”
Posted by Med School Watercooler at 3:18 PM No comments:

Joey Baggett, supervisor of radiology and teleradiology at the Strada Patient Care Center, said the new equipment is a step forward for patient care at USA. “With Samsung Digital X-ray equipment, we are able to maintain high quality images in various conditions for enhanced flexibility,” he said. “The improved sharpness and clarity produced by the equipment also supports highly accurate diagnoses.”

According to Baggett, the stitching feature allows for scoliosis imaging and leg length all in one image. “An integrated wireless system features remote control and a wireless foot peddle that provides instant data transfer and minimizes movement,” he said. “The convenient system allows table positioning from anywhere in the room. This streamlines workflow to enhance productivity and patient throughput.”

Additional benefits of the new X-ray equipment include clarified regions of interest for procedures such as spine exams. Baggett said the Samsung machines provide a clear view of thick and thin bones, tissues, contours, orthopaedic implants and bone overlaps, which display sharply and without artifacts.

According to Baggett, the move to the Strada Patient Care Center provided radiology patients and employees with benefits that were previously unavailable. “Patients benefit from the fact that we are all housed under one roof and can provide accurate exams with minimal wait time,” he said. “Also with faster exposure times, we are able to promote a lower dose of radiation to the patient.”

Baggett said the radiologic technologists enjoy working in a new facility with new equipment. “The best part is the ability to work face-to-face and hand-in-hand with the other departments instead of remotely,” he said.
Posted by Med School Watercooler at 8:59 AM No comments:

The University of South Alabama College of Medicine will present its second annual Case Report Symposium on Friday, June 9, 2017, from 2 p.m. to 4 p.m. in the first floor conference room at the Strada Patient Care Center.

“The symposium provides students with a chance to not only discuss topics of interest in their desired field of medicine, but also encourages students to become more active in research experiences,” said Alex Wiles, a rising fourth-year student at the USA College of Medicine. “We are excited for the event and are looking forward to showcasing our third-year experiences to faculty, guests and fellow students.”

Admission is free to the public. The Strada Patient Care Center is located at 1601 Center St. For more information, contact Alex Wiles at caw807@jagmail.southalabama.edu.
Posted by Med School Watercooler at 3:10 PM No comments: 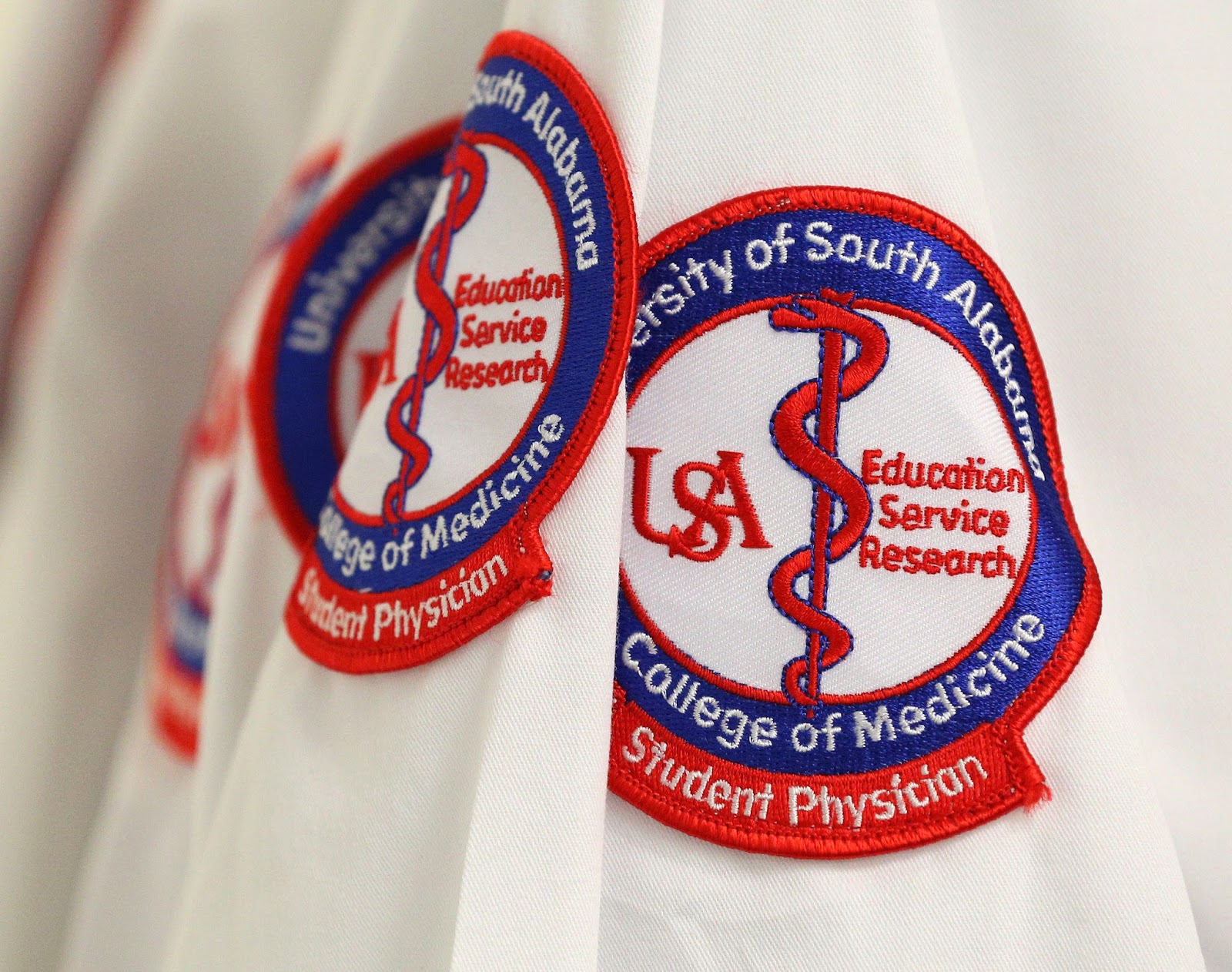 The University of South Alabama College of Medicine will host its annual White Coat Ceremony at the USA Mitchell Center on June 17, 2017, at 10 a.m. During the ceremony, rising third-year medical students in the Class of 2019 will be cloaked with their first white coats, the traditional dress of physicians for more than 100 years.

The keynote speaker will be Dr. Lee Grimm, assistant professor of surgery at USA.

For students, the White Coat ceremony serves as a reminder of the responsibility they take by dedicating themselves to the care of patients. During the ceremony, the students take the Medical Student Oath, a promise to uphold the human aspects of medicine including sensitivity, compassion and respect for patients.

Ten select rising seniors from the class of 2018, as well as three residents and two faculty, including Dr. Grimm, will also will be inducted into the Gold Humanism Honor Society at the ceremony. Inductees are selected by the outgoing third-year medical students for practicing patient-centered medical care with integrity, compassion and altruism.

A reception for students, family members and friends will take place at the Waterman Globe following the ceremony.
Posted by Med School Watercooler at 10:51 AM No comments: