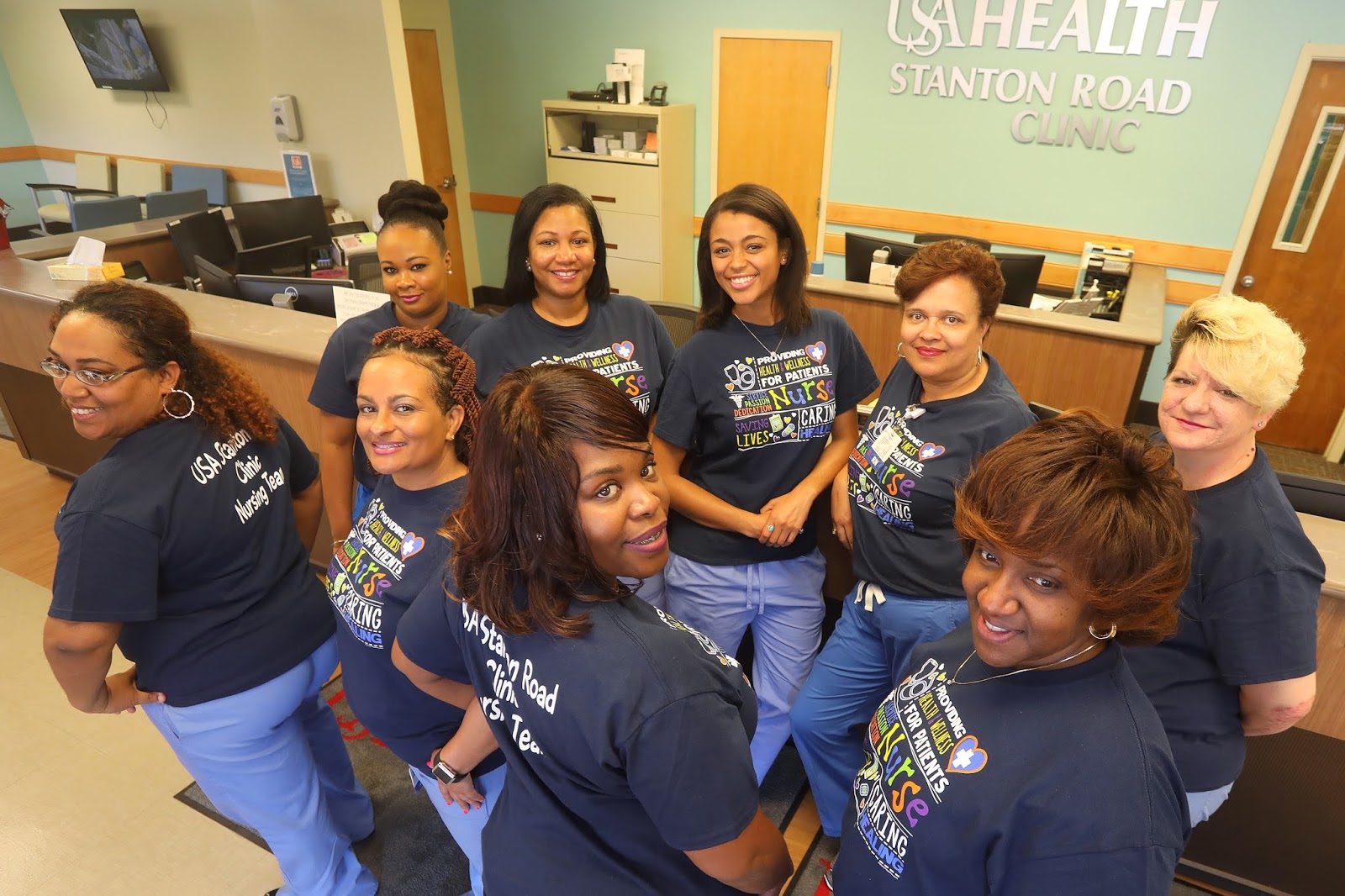 USA Physicians Group clinics recently celebrated Nurses Week, a national initiative led by the American Nurses Association to honor and celebrate the work of the nation’s registered nurses — the largest of the health care professions.

“In recognition of nurses week, the management staff at Stanton Road Clinic decided to purchase T-shirts for the staff to wear each Friday during May,” said Yolanda Todd, clinical nursing specialty supervisor at USA Stanton Road Clinic. “We have a great team of individuals who work hard on a daily basis to assist their patients, their families and our medical team. This T-shirt promotes the mission we have for our patients and staff, and shows the dedication that each staff member gives every day.”

Robin Geary, clinical nursing supervisor at USA Stanton Road Clinic, said she was excited to participate in nurses week. "Nurses pour their hearts into their work, selflessly caring for others without giving it a second thought,” she said. “They play a vital role in the health care industry, and it is important to let them know that their hard work, dedication and expertise are both appreciated and noticed.”

The theme for the week was "Nurses Rock," as several USA Physicians Group administrators served ice cream to the nurses in recognition of their hard work. At the ice cream socials, nurses were also able to participate in photo booths and enter door prizes while eating with colleagues.

"We had a great turnout from both our nurses and our administrators at our nurses week celebration," said Dr. Natalie Fox, director of nursing for USA Physicians Group. “I want each and every one of our nurses to know I appreciate everything they do to make a difference in the lives of our patients.” 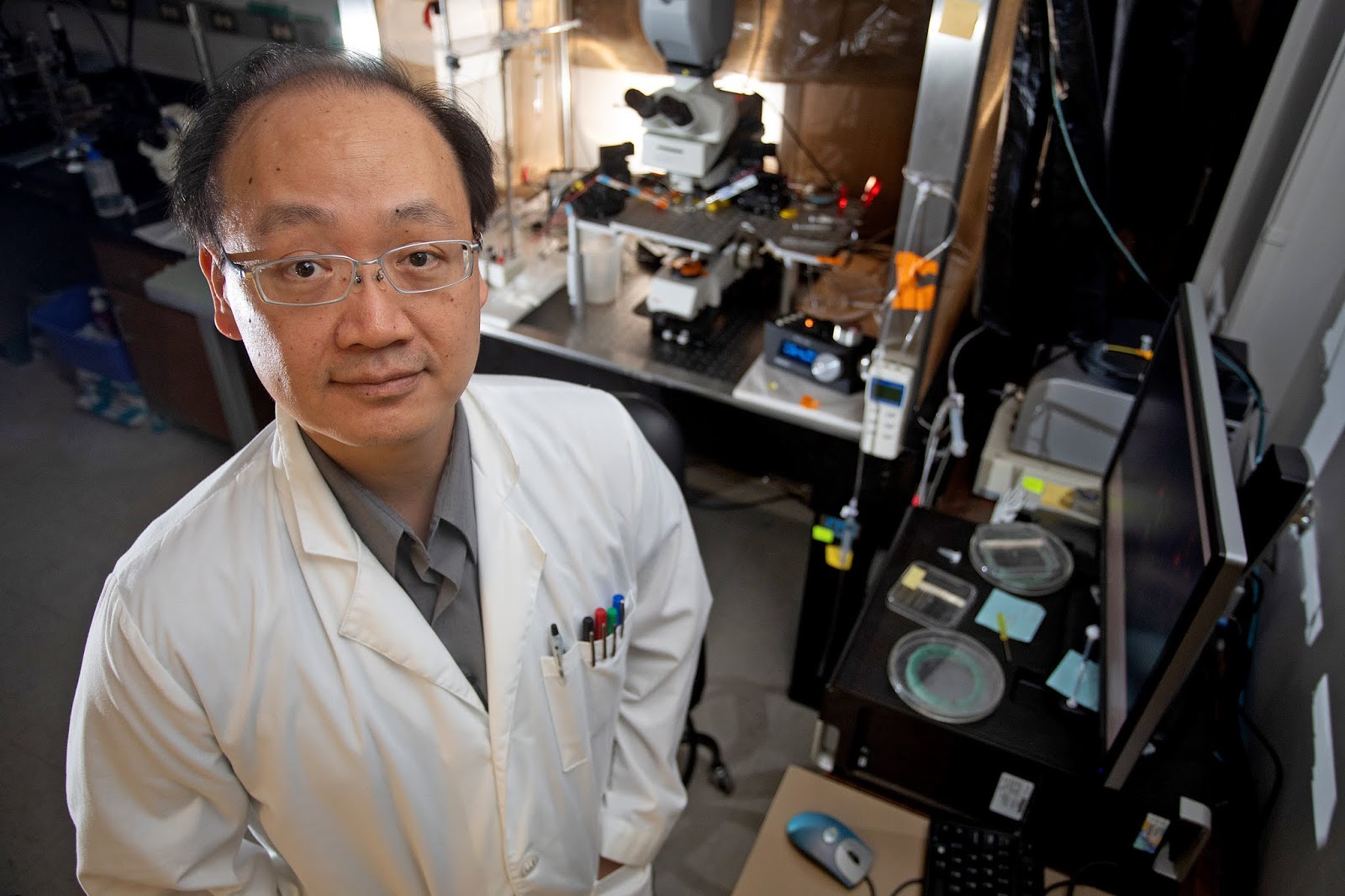 Dr. Mike Lin, assistant professor of physiology and cell biology at the University of South Alabama College of Medicine, recently was awarded a $1 million four-year grant from the National Institutes of Health (NIH) to study the link between hospital-acquired pneumonia and dementia.

According to Dr. Lin, patients in intensive care units are at an increased risk for developing long-term health threats, including cognitive impairment. “The Centers for Disease Control and Prevention estimated that about one in 25 hospital patients has at least one infection contracted during the course of their hospital stay,” he said. “Among the infections, bacterial pneumonia is the second most prevalent and is the most direly linked to outcomes.”

Testimonials, reviews and calls-to-action are on the rise on this Post Critical Care Syndrome, Dr. Lin said the causative mechanisms that lead to abrupt cognitive impairment cannot only be ascribed to age, gender, relative brain hypoxia, anesthetics and sedatives.

His study aims to gain insight on the mechanisms leading to abrupt cognitive impairment among patients in intensive care units.  “Despite advances in medicine that have significantly prolonged life expectancy, the disease associated neurodegeneration and dementia is increasingly worrisome,” Dr. Lin said.

According to Dr. Troy Stevens, director of the USA Center for Lung Biology and Lenoir Louise Locke Chair of Physiology and Cell Biology at the USA College of Medicine, Dr. Lin’s research provides a novel therapeutic target to improve patient outcomes. “In the last ten plus years, it has become recognized that one of the major problems exhibited among patients who become critically ill is impairment in cognitive function,” he said. “Dr. Lin offers a previously unappreciated mechanism of disease in critically ill patients, as previous research has not linked infection-induced amyloids to the decline in cognitive function."

Aberrant protein aggregation is a known mechanism that links to several diseases affecting cognition, memory, neuromuscular and cardiovascular function. “This research addresses a novel mechanism underlying the end organ dysfunction that is evident during and in the aftermath of critical illness,” Dr. Lin said. “We found that patients in the ICU who contract nosocomial pneumonia have high levels of ‘toxins’ in their bodily fluids, compared to critically ill patients who do not have bacterial pneumonia.

Last year, Dr. Lin was among five other USA researchers who received the 2017 College of Medicine Faculty Intramural Grants Program Research Awards, which provided seed funding to support this project.

Dr. Lin credits institutional support and input from his collaborators for helping to secure his first R01 grant, including Drs. Troy Stevens, Ron Balczon, and Xiangming Zha of the University of South Alabama, Drs. Brant Wagener and Jean-Francois Pittet of The University of Alabama at Birmingham, and Dr. Jacob Raber of Oregon Health and Science University.  “Previous studies conducted at the USA Center for Lung Biology on Pseudomonas aeruginosa – a prevalent cause of nosocomial pneumonia – and key biological specimens provided by his collaborators, all played an instrumental role”, he said.

The Research Project Grant, or R01 grant, is the original and historically oldest grant mechanism used by NIH.  R01 provides support for health-related research and development based on the mission of the NIH. This is Dr. Lin’s first R01 grant, which follows up on an early stage R00 funding, also from the NIH.

Posted by Med School Watercooler at 1:30 PM No comments:

Dr. Ralph Lee Irvin Jr. is the 2018 recipient of the Samuel Buford Word Award, the highest honor given by the Medical Association of the State of Alabama. It is presented in recognition of service to humanity beyond the usual scope of medical practice.

Dr. Irvin, a board certified physician in anesthesiology and pain medicine, has been in private practice in Mobile since 1983. When the Medical Society of Mobile County began receiving hundreds of calls from patients who were left in need after the closing of a pain clinic, Dr. Irvin was willing to be placed at the top of the list as a resource. As one of the physicians in the area who could care for patients with pain pumps, he did not shy away from what became more than an ordinary challenge.

Over the course of a year and a half, he not only cared for his own patients but also the influx of several hundred more patients with pain pumps, while also working closely with the investigators with the Alabama Board of Medical Examiners to ensure the safety and health of the patients.

He is a member of the Medical Society of Mobile County, Medical Association of the State of Alabama, North American Neuromodulation Society, the American Society of Interventional Pain Physicians, and the Society of Pain Practice Management. He is also a diplomat with the American Board of Anesthesiology.

Dr. Steven P. Furr is the 2018 recipient of the Paul W. Burleson Award, presented to a physician in recognition of a medical career that encompasses high ethical and professional standards in patient care, as well as extraordinary service to physician organizations at the county, state and national levels.

A family medicine physician based in Jackson, Ala., Dr. Furr earned his medical degree from the University of South Alabama College of Medicine in 1981. He completed his residency training at the University of Alabama in Huntsville as part of the family practice program.

Dr. Furr was appointed to the University of South Alabama Board of Trustees in 2006 and has served as chair pro tempore. He served as founding chair of the USA Children's & Women's Hospital Development Council and on the USA 50th Anniversary Annual Fund Alumni Leadership Council. He was honored by the USA National Alumni Association in 2014 with a Distinguished Alumni Award. That same year, he spearheaded the creation of the USA Board of Trustees Endowed Scholarship Fund, which provides a scholarship to each incoming freshman class’s top academic performer.

A past chairman of the board and president of the Alabama Academy of Family Physicians, Dr. Furr was the first USA College of Medicine graduate to serve as president of the Medical Association of the State of Alabama. He continues to serve as a delegate to the American Academy of Family Physicians Congress of Delegates as well as the American Medical Association House of Delegates.

Dr. Furr is an accomplished presenter, often lecturing on issues such as medical technology, licensure, ethics, leadership and pain management.

Posted by Med School Watercooler at 9:49 AM No comments: 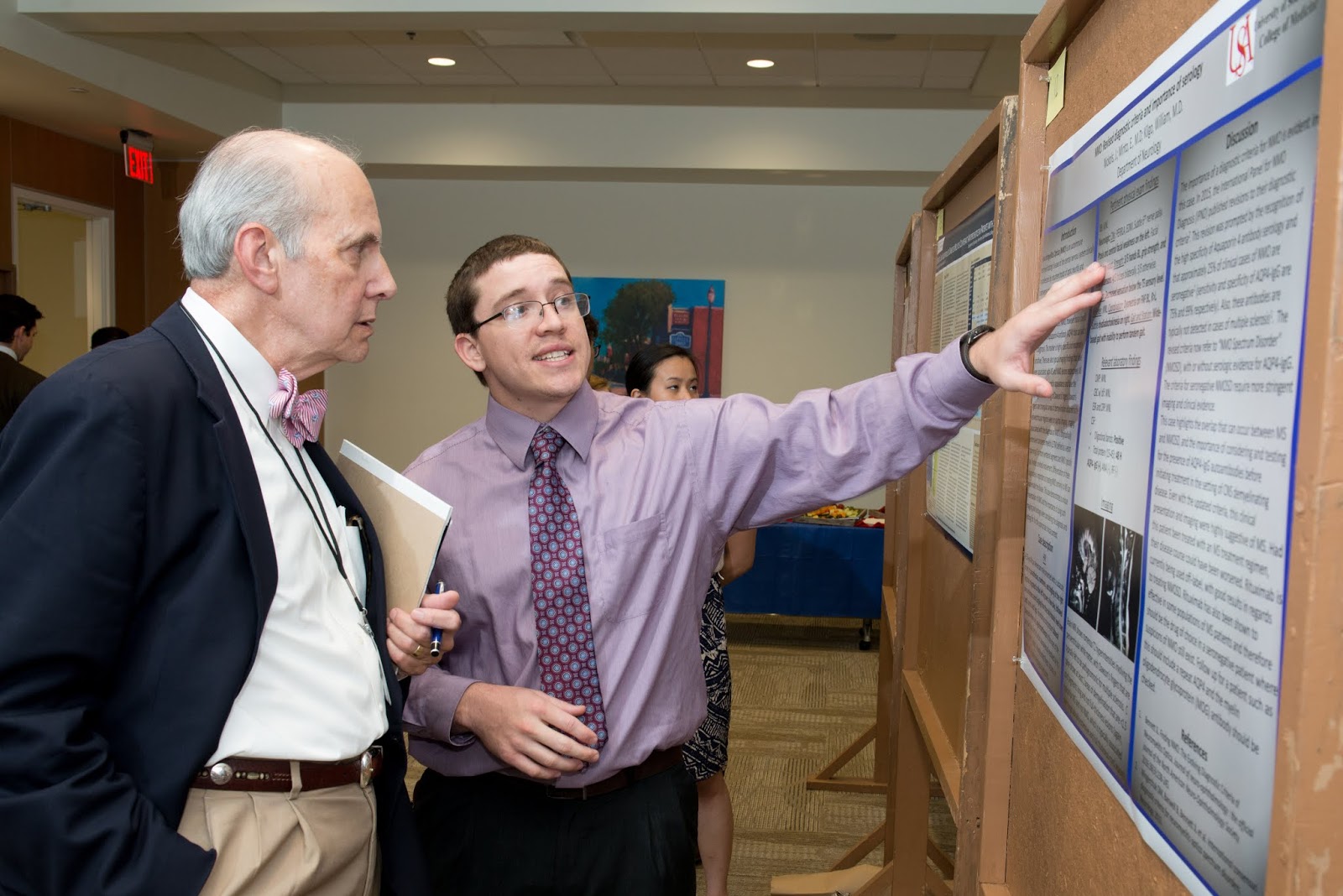 Third-year medical students at the University of South Alabama College of Medicine will host the annual M3 Case Report Symposium at 3 p.m. June 7, 2018. The symposium will take place at the Strada Patient Care Center on the first floor and all faculty, staff, residents and students are invited to attend.

The symposium gives third-year medical students the opportunity to present a novel, rare or meaningful case report to faculty, residents and peers in the form of a poster presentation, thereby gaining scholarly experience useful for development as a physician-in-training.

Throughout their third year, medical students interact with patients as a member of the health care team. Some of the patients encountered will have a lasting impact on students and potentially affect career and specialty choices as future physicians.

Posted by Med School Watercooler at 9:22 AM No comments: