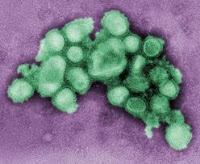 With flu season just around the corner, Dr. John VandeWaa, director of the University of South Alabama division of infectious diseases, says it is important for you and your family to get vaccinated in order to protect yourself from the influenza virus.

“The influenza vaccine is safe, highly effective, and should be taken by everyone unless you have a serious egg allergy,” said Dr. VandeWaa, who is also professor of internal medicine at the USA College of Medicine. “It is especially important for those in high risk groups to get protected, such as pregnant women, infants, and the elderly. This also includes those with a chronic illness like heart disease and diabetes or those who are immunocompromised in any way.”

According to Dr. VandeWaa, between 30,000 and 40,000 people die from the flu each year in the United States, many of which could have been prevented by appropriate vaccination.

“With a flu shot, protection goes beyond the person that has been vaccinated – it protects your family, friends, and coworkers as well,” he said. “It is especially important for health care professionals to get vaccinated as a way to protect their patients as well as themselves.”

“Contrary to popular belief, you cannot get the flu by receiving the flu vaccine,” Dr. VandeWaa added. “The vaccine uses a killed, not live, virus.”

Immunity takes two weeks to develop after you have been given the vaccine and lasts for at least six months.

To view a complete schedule of flu shot clinics, visit www.usahealthsystem.com/fluvaccine.
Posted by Med School Watercooler at 3:38 PM No comments: 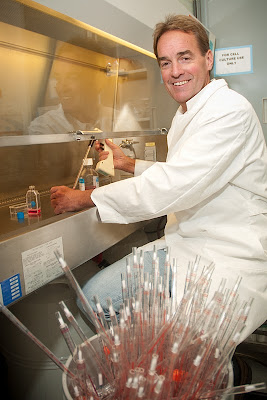 Dr. Richard E. Honkanen, professor of biochemistry at the USA College of Medicine, was recently awarded a five-year Transformative Research Project Award by the National Institutes of Health. The grant award totals $ 1,695,625. Dr. Honkanen was only one of 17 researchers across the United States to receive the highly competitive award this year.

According to Dr.Honkanen, the grant will help fund a research project that could change the way we treat high cholesterol in the future.

Dr. Honkanen said that for most people, having a heart attack or stroke is a lifestyle choice. “Most people that have a heart attack or stroke choose to eat a poor diet, do not get enough exercise, or do not take the advice of their physician,” he said. “However, children suffering from a rare form of high serum cholesterol, called familial hypercholesterolemia, have heart attacks before they reach their teenage years and do not respond to available treatment options. To develop a treatment for children with familial hypercholesterolemia, we needed to think outside of the box.”

For both children with familial hypercholesterolemia and most people with cardiovascular disease, the process leading to a heart attack or stroke starts with the development of atherosclerosis, a common disorder that occurs when fat, cholesterol, and other substances build up in artery walls and form abnormal structures called plaques.

“If our bodies could break down excess cholesterol in the developing plaques, we would not likely develop the serious health threats that occur over time such as heart attacks and strokes,” Dr. Honkanen said.

“In this research project, we will develop methods to safely engineer human immune cells, adapting a strategy used by bacteria to allow macrophages, or natural defense cells, to metabolize cholesterol,” he added. “In humans, the inability of macrophages to break down cholesterol represents a critical early event in the maladaptive immune response that leads to the onset and progression of atherosclerosis.”

Dr. Honkanen said that in order to develop an entirely new therapy, they plan to introduce humanized versions of genes from bacteria that can feed on cholesterol into human immune cells. “If successful, the transformed cells would gain the ability to ‘eat’ the cholesterol in the plaques of the arteries of people with disease, providing a new approach for the prevention of heart attacks and strokes.”

According to Dr. Honkanen, the key to the research project is to develop a therapy that will be safe. “We must make sure the new therapy does not cause negative consequences by removing too much cholesterol, which is an essential component of all human cells” he said. “We need to only get rid of the excess cholesterol, which will require the development of new regulatory controls.”

The Common Fund’s NIH Director’s Transformative Research Projects Program was specifically created to support exceptionally innovative, high risk, original and/or unconventional research projects that have the potential to create or overturn fundamental paradigms. These projects tend to be inherently risky, but if successful can profoundly impact a broad area of biomedical research.

The primary emphasis of the Transformative Research Projects Program is on creative ideas and projects that have the potential to transform a field of science and to provide adequate support for the work.

For more information on the program, visit http://commonfund.nih.gov/T-R01.
Posted by Med School Watercooler at 3:38 PM No comments:

The next Distinguished Scientist Seminar at the University of South Alabama College of Medicine will be presented by Dr. Alfredo Torres, associate professor and co-director of BSL-3 Labs for the microbiology/immunology and pathology department at the University of Texas Medical Branch in Galveston, Texas.

The lecture, titled "To See Burkholderia Mallei, or Not to Cure Glanders, That is the Host Question,” will take place Sept. 29, 2011, at 4 p.m. in the Medical Sciences Building auditorium.

Dr. Torres earned his B.S. and M.S. degrees from Universidad Autonoma de Puebla in Puebla, Mexico, and a Ph.D. degree from the University of Texas at Austin. 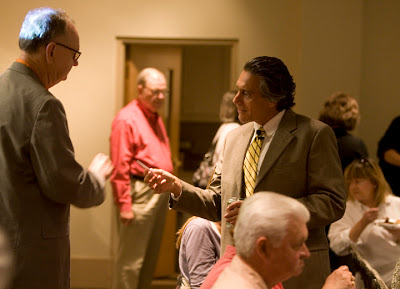 This week, Dr. George Rusyniak, associate professor of neurosurgery at the University of South Alabama College of Medicine, presented the September Med School Café lecture. The lecture, "Surgical Treatment of Epilepsy," had a total of 49 attendees.

At the lecture, Dr. Rusyniak discussed epilepsy, a brain disorder in which a person has repeated seizures over time. He also explained available epilepsy treatments, including epilepsy surgery, an operation on the brain that can control seizures.

The next Med School Café lecture will be held on Oct. 20, 2011, at the Mobile Museum of Art. If you are interested in attending, email kepartridge@usouthal.edu for details. 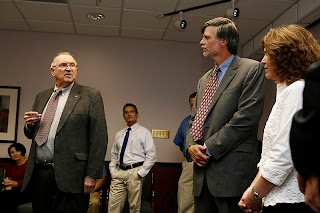