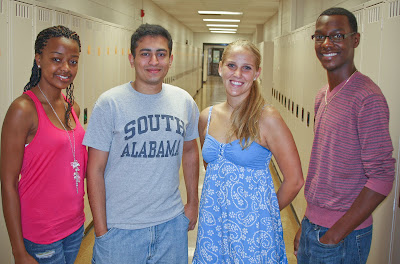 Left to Right: Whitney Toole, Osman Hashmi, Stephanie Stopka and Christopher Hoffman were among the University of South Alabama College of Medicine Class of 2014 who were introduced to medical school this week during orientation. There are 74 students in this year's freshman class.

The University of South Alabama College of Medicine welcomed new faces this week during the Class of 2014’s freshman orientation.

Osman Hashmi, who received his bachelor’s degree in psychology from USA, said orientation has been a great way to get to know everyone. “I’m really nervous and excited all at the same time,” he said. “I know it will be a challenge, but I’m ready for it.”

During freshman orientation, students completed the registration process and were given an overview of what they should expect during their upcoming years as medical students. On Friday, the orientation committee spoke with the students, giving them important information on how to survive their first year in medical school.

“Orientation is really a rush of information,” said Stephanie Stopka. “We get all of the basics covered, and we also get to meet everybody. It’s a great opportunity to get to know more about our classmates.”

Stopka, originally from Gainesville, Fla., graduated from the University of Florida with a degree in nutritional science and sports medicine. She said the transition to USA has been great. “I have family in Mobile, so it’s nice to have a good support system here,” she said. “It makes everything a lot more comforting.”

Stopka said she chose to attend medical school at USA because of the atmosphere. “The university is extremely student-centered -- they are always here for us. Having the opportunity to come here is phenomenal.”

For some first-year students, there was a strong personal motivation that led them to attend medical school. Whitney Toole said she always knew she wanted to be a doctor. “When I was in fifth grade, my dad died of a heart attack and it really pushed me to become involved and help others,” she said. “I’m here mainly because of him.”

Toole, originally from Calvert, Ala., received her undergraduate degree in science business from the University of Notre Dame. She has been looking forward to coming back home to Alabama. Toole will be the first physician in her family.

Currently, Hashmi is interested in cardiac surgery, although he knows his interests may change throughout the four years of medical school. “A lot of my family has had heart surgery and that is something that really interests me.”

With physicians in his immediate family – his father is an endocrinologist and his sister is a fourth-year medical student in Birmingham – Hashmi always knew a career in medicine would be in his future.

The students agree that during the entire orientation experience, there have been so many feelings wrapped into one. “I’m looking forward to starting a new page in my life,” Stopka said. “I get to follow my passion, and I’m excited about it.”

“I’m anxious to get started,” said Tuskeege, Ala., native Christopher Hoffman. “I know it will be intense, but I’m ready to go.”

Hoffman attended the University of Alabama at Huntsville, where he completed his undergraduate degree in biological sciences. He said he would love to go back and visit his hometown after medical school.

“The area faces many challenges,” he said, “and I would like to go back and mentor and encourage young people. I want them to know that if I can do it, they can too.”
Posted by Med School Watercooler at 3:02 PM 1 comment:

Your Top Picks For Online Resources 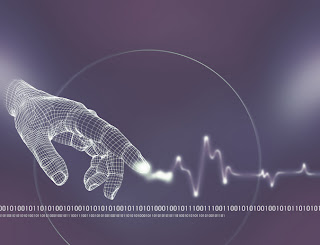 Because of its widespread usability and access, the Internet has enabled new forms of activities and interaction. The role of blogs and forums has become increasingly mainstream, and they are quickly becoming one of the most interesting and interactive tools for communication, education and news.

Recently, many University of South Alabama College of Medicine faculty, staff and students shared the web pages and blogs they most frequently visit.  This is the first of three posts.

Dr. Allen Perkins, chair of family medicine, started his blog, http://usafamilymedicine.wordpress.com/, to help with resident recruitment. He also uses it to express his opinions regarding the healthcare delivery system. Dr. Perkins’ blog is a favorite among several faculty and staff, including Karen Braswell, secretary in the office of sttudent affairs at the medical school.

Dr. Perkins also refers to this blog, written by his friend Josh Freeman. The blog includes information about health policy, often expressing a point of view not found in mainstream medical blogs. Dr. Perkins frequently references the Kaiser Family Foundation for information about the healthcare delivery system and the New Republic blog to keep abreast of policy issues.

A large number of USA faculty and staff use PubMed, which comprises more than 19 million citations for biomedical literature from MEDLINE, life science journals and online books.

Dr. Quindlen finds the Medical Quack, a blog run by Barbara Duck, useful for up-to-date posts on a broad spectrum of the medical industry. He visits this site to follow what is happening in the EMR industry.

CardioSource is a favorite among Dr. Frank Pettyjohn, chair of emergency medicine.

Shyla Reddy, assistant professor of family medicine, frequently uses the American Geriatrics Society because it provides comprehensive information on the common diseases and disorders of older adults. For more information and videos on a variety of geriatric topics, she visits http://nihseniorhealth.gov/.

Carl Taylor, director of the Center for Strategic Health Innovation, reads http://thehealthcareblog.com/ because of the leadership and expertise of the bloggers and because of the feedback of the readers. Taylor said the site is a great resource for debates over health reform, health policy and health IT. He also regularly follows and blogs on MedTech-IQ, a social network site focused on health IT and funding.

Next week we'll continue to share more.
Posted by Med School Watercooler at 3:01 PM No comments: Flanked by Ob.Gyn residents, Dr. Porter (center) was honored at a reception on Friday at USA Children's and Women's Hospital for her service to the USA College of Medicine.
Dr. Kathy B. Porter, departing professor and chair of the department of obstetrics and gynecology at the University of South Alabama, will soon be starting a new chapter in her life, entering active duty in the U.S. Army as a physician, educator and researcher.

Dr. Porter, who has served on the USA faculty for eight years, said her decision was one that she had to think about for a long time. “I had an encounter with a stranger who reminded me of the need to serve my country, and I felt that this was the best time to do this in my career,” she said.

As a Lt. Col. in the U.S. Army, Dr. Porter will serve soldiers and their families, as well as mentor other healthcare providers.

“This is just an outstanding department, and we all did this together,” Dr. Porter said. “The program is well-established and respected in the community. I know that whoever will come after me will continue to expand and grow the department even further.”

Dr. Porter also mentioned one of her personal accomplishments, a children’s book she published titled “Tales of Argos: The Adventures of a Greek Hunting Dog at Children’s and Women’s Hospital under the pen name “K.P. Catamount.” “The book was written in memory of my mother-in-law who was terminally ill and received fantastic care at USA,” Dr. Porter said. To read more about the book, visit http://www.southalabama.edu/usahealthsystem/pressreleases/2010pr/022610.html.

Dr. Porter said she will be leaving USA with many fond memories. “I’ve had great experiences and opportunities here,” she said, “and I have been able to work alongside outstanding faculty and staff. I’m going to miss everybody.”
Posted by Med School Watercooler at 2:14 PM 1 comment: 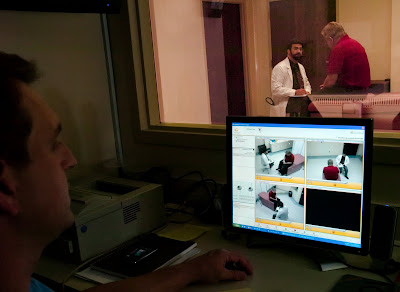 Brad Anderson, a human simulation technician at USA, records a “standardized” patient encounter with a third-year medical student at USA. In this exercise, the patient is actually an actor who presents with a set of medical concerns. The students, who are at the beginning of their family medicine clerkship, are evaluated on how well they interact with a patient in an outpatient setting. The recording is shared with students, along with a critique to assist in developing essential skills. The test is repeated at the end of the clerkship to measure progress.
Posted by Med School Watercooler at 1:57 PM No comments:

During the talk, Dr. Low will address current and new advances in the field of autonomic nervous system clinical aspects, tests and new developments.

Dr. Low founded the Mayo Clinic Autonomic Laboratory in 1983 and has been continuously funded by NIH for over 30 years. His research interests include human and experimental autonomic dysfunction, pathophysiology of orthostatic intolerance and its amelioration, multiple system atrophy, autoimmune autonomic neuropathy, and postural tachycardia syndrome.

In conjunction with the lecture, Tyler Elyse Gaston, a fourth-year medical student at USA, will receive the Eran and N.Q. Adams Endowed Scholarship in Neurology.

The Eran and N.Q. Adams Endowed Scholarship was established to support, in the early stages of their careers, young physicians engaged in neurology who wish to gain a better understanding of dysautonomia. Third and fourth year medical students at USA were invited to submit applications for the scholarship that included a unique research or learning opportunity.