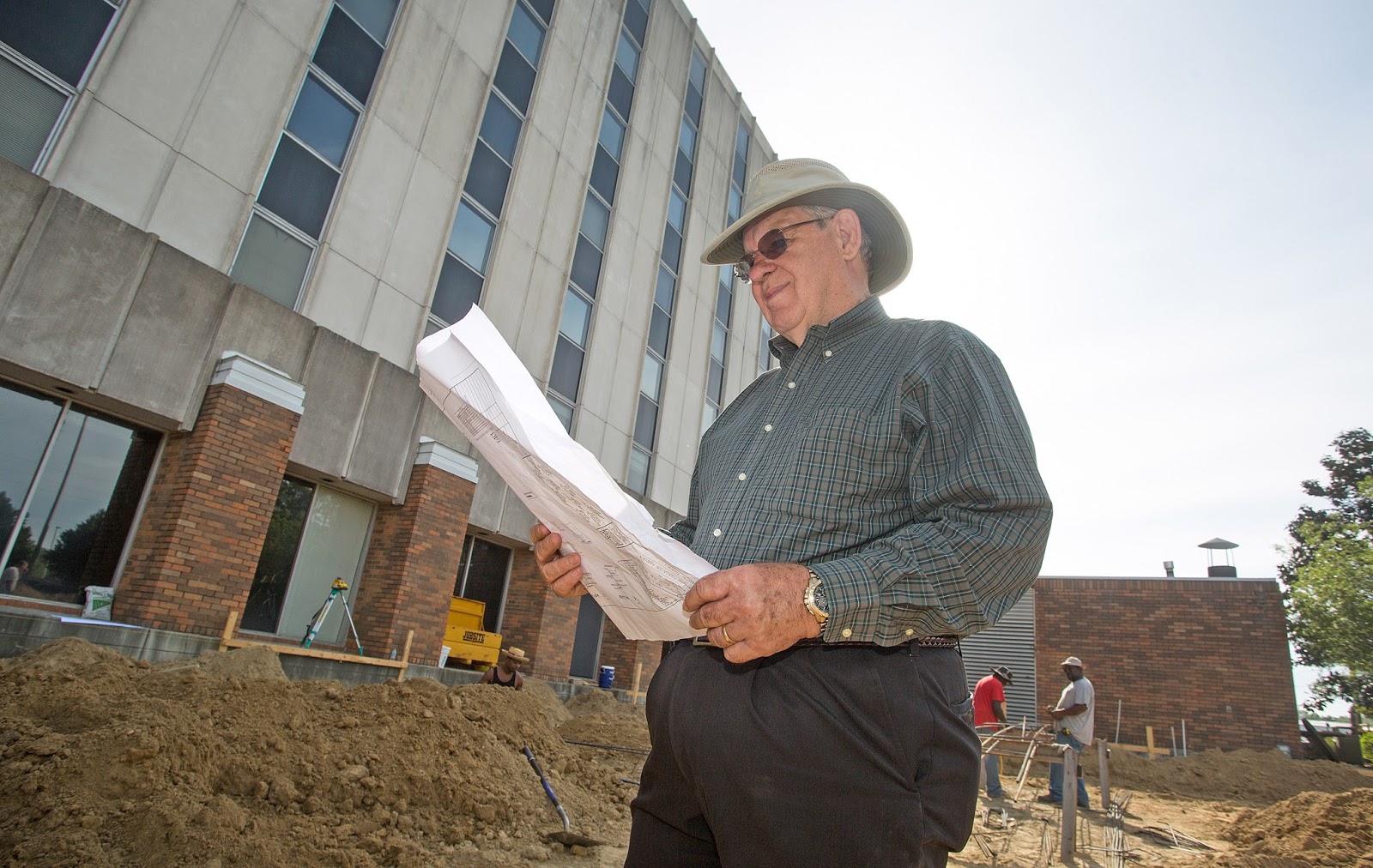 In 1967, Roy Lewis moved to Mobile, Ala., to begin his career in the construction business. Fresh out of college with a degree in building sciences, he began working on-site at the USA Medical Center campus, then Mobile General Hospital.

This year, Lewis – now the owner of Roy Lewis Construction Corporation – oversaw a major part of the expansion of the clinic space in the Mastin Building – the building he worked on when it was originally constructed nearly 50 years ago.

“Coming back to work on the Mastin Building addition brought back a lot of memories of things that would happen on the job – especially the jokes and pranks that the workmen would pull on one another,” Lewis said. “It was a lot more fun to work in construction back then.”

Lewis was born in Daphne, Ala., in the house his dad built. “He put my footprints in the fresh concrete on the rear steps,” Lewis recalled. His dad, a professional electrician and “jack of all trades,” finished that house a little bit at a time. Growing up, Roy always enjoyed building and said “it must’ve run in the family.” As a kid he constructed forts and tree houses; he was especially proud of a tree house he built in a chinaberry tree in the backyard.

But construction wasn’t always at the forefront of Lewis’ mind. Lewis, who had dreamt of flying since he was six years old, originally attended Auburn University to pursue a degree in aerospace engineering. He wanted to become a pilot in the military and hopefully get into the space program. His junior year, though, he flunked his physical because of a heart murmur, and he dropped out of school. It wasn’t until he began working for an architect as a draftsman that he became interested in building for a living. “I went back to Auburn, changed my curriculum, and here I am,” he said.

After graduating from Auburn University, Lewis briefly served as project manager for the Saturn rocket test platform in Huntsville, Ala. “At that time it was the only offer I got coming out of school,” he said. “Construction jobs were very limited.” Soon after – at the age of 23 – he moved to Mobile and started work completing a surgery suite at USA Medical Center.

“We finished out the interior of a surgery suite on the West side of the hospital while the Mastin Building structure was being put into place,” he said. Toward the end of the Mastin Building project, Lewis was brought in as project engineer. He was responsible for coordinating the installation of cabinets and wardrobes – “getting materials to the job.”

According to Lewis, the Mastin Building was originally built as nursing dormitories. “At the time, I was hoping to catch me a girl in nursing school,” he laughed, “but that never materialized."

Although the Mastin Building looks “pretty much the same” as it did then, Lewis said the area around it has changed tremendously. “It was sitting back in the woods, and Three Mile Creek wasn’t developed,” he said. “There was a good bit of area in the hospital that wasn’t built yet, either.”

The Mastin Building was originally built with a swimming pool on its West side to accommodate the students who lived there. “When we were putting on the addition this year, we uncovered a corner of that swimming pool and had to reposition the placement of the rear entry stoop,” Lewis said. “It’s much easier and much more cost-effective to reposition than to get rid of the swimming pool.”

Lewis and his crew – who were contracted to lay the structural foundation and the structural steel of the addition – have finished their portion of the job, which is now entering its final stage of completion.

The 2,000 square foot addition is expected to be move-in ready in October. The new space will provide 10 extra exam rooms, a physicians’ work room, patient restrooms and a staff break room.
Posted by Med School Watercooler at 10:40 AM No comments:

The University of South Alabama University Lions Club will host the 4th annual Kickoff Run for Sight at the Swamp Loop course on USA’s main campus on Aug. 27, 2016, at 7:30 a.m.

Everyone is invited to participate, and a fun walk will be available for families with small children. Food, beverages and music will follow the run, and the top male and female in competing age groups will receive an award. This year’s event also includes a cash prize for the student organization with the highest number of registered participants.

Participants are encouraged to preregister for the event. Click here for more information.
Posted by Med School Watercooler at 12:37 PM No comments: 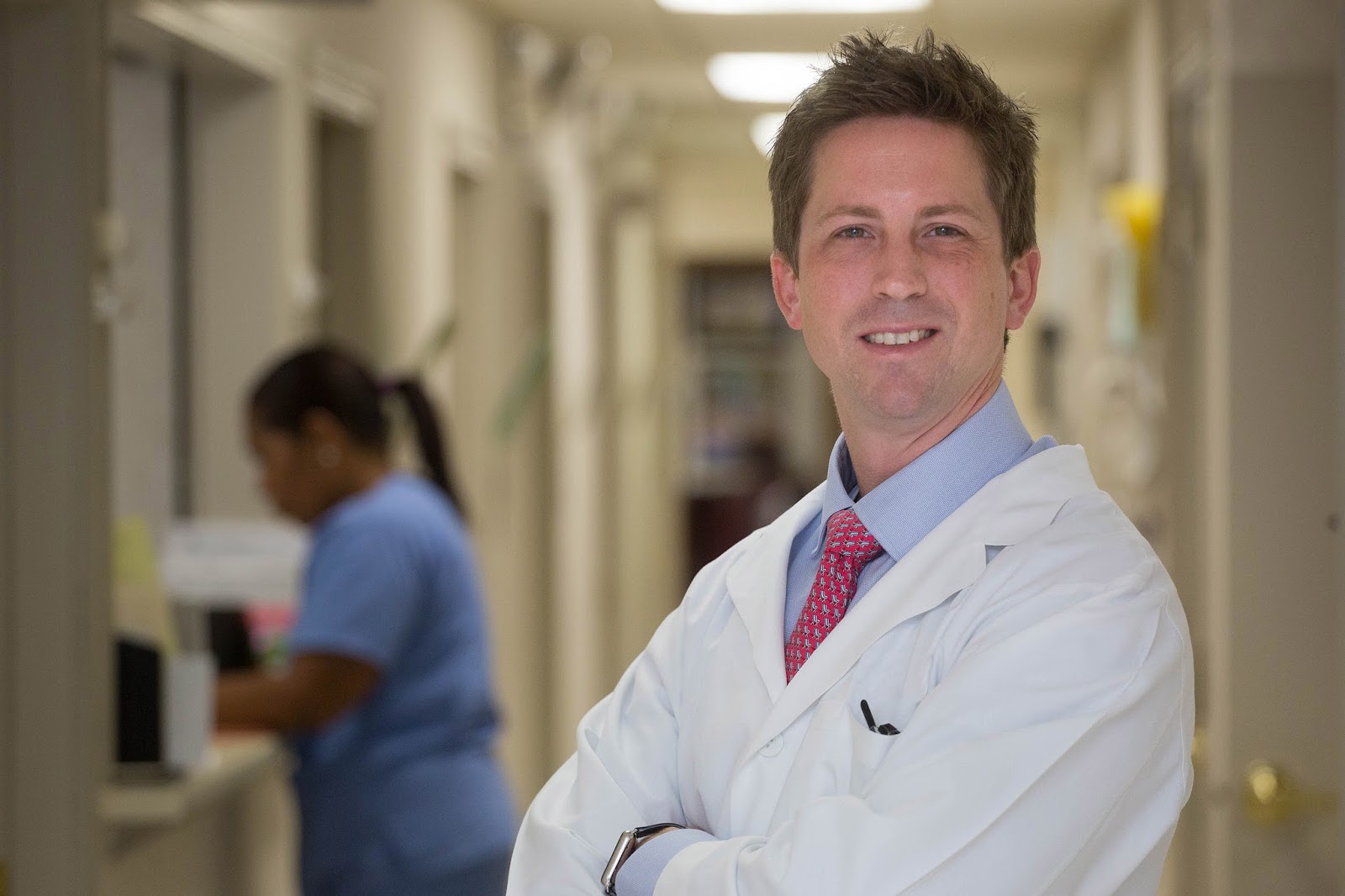 Dr. Christopher Jones recently was appointed assistant professor of orthopaedics at the University of South Alabama College of Medicine and will serve as a sports medicine orthopaedic surgeon with USA Physicians Group.

Dr. Jones specializes in minimally invasive arthroscopic surgery for injuries to the shoulder, knee, elbow and hip. He also performs surgical joint replacement for arthritis of the knee and shoulder. In addition, he is certified to treat cartilage injuries in the knee with articular cartilage implantation.

Dr. Jones earned his bachelor of science degree in biochemistry from the University of Maryland in College Park, Md., and his medical degree from Georgetown University School of Medicine in Washington, D.C. He completed his residency training in orthopaedic surgery at State University New York System at Stony Brook, N.Y. He completed a fellowship in orthopaedic surgery sports medicine at the American Sports Medicine Institute in Birmingham, Ala.

He is a member of the American Orthopaedic Society for Sports Medicine, Arthroscopy Association of North America and the Alpha Omega Alpha Honor Medical Society.

The University of South Alabama Department of Surgery is hosting a lecture featuring Dr. E. Gaylon McCollough, renowned facial and nasal plastic surgeon and founder of the McCollough Plastic Surgery Clinic in Gulf Shores, Ala.

Dr. McCollough will present the Surgery Grand Rounds lecture on Aug. 26, 2016, at 7 a.m. in the USA Medical Center 2nd floor conference center. The topic of discussion will be plastic and reconstructive surgery.

Dr. McCollough earned his medical degree from the University of Alabama Medical School in 1969. He completed his residency training in otolaryngology and general surgery at the University of Alabama. Dr. McCollough was included in Woodward and White’s “Best Doctors in America,” “America’s Top Plastic Surgeons” and was honored by the March of Dimes as “Alabama Citizen of the Year” for 1994-95. He is board-certified by the American Board of Facial Plastic and Reconstructive Surgery and the American Board of Otolaryngology.

The event is open to faculty, staff and students at USA.
Posted by Med School Watercooler at 10:40 AM No comments: