The University of South Alabama College of Medicine’s Summer Research Program culminated with the 46th annual Medical Student Research Day that took place on July 26, 2019, in the Medical Sciences Building.

The USA College of Medicine’s Summer Research Program is a nine-week program that pairs medical students with faculty mentors. At this year’s Research Day, there were eight oral presentations and 50 poster presentations.

Through the research program, medical students develop an appreciation of how research contributes to the knowledge and practice of medicine. Accepted entering students or rising second-year students in the USA College of Medicine are eligible to participate. The summer experience includes hands-on research related to basic science and/or clinical medicine; a seminar program that focuses on various scientific and clinical topics; and student presentations at Research Day.

The Clyde G. ‘Sid’ Huggins Medical Student Research Awards will be announced for the best oral and poster presentations.  Huggins was a member of the USA College of Medicine charter faculty and served as the college's first dean of students.


Posted by Med School Watercooler at 2:39 PM No comments:

Osama Abdul-Rahim, M.D., assistant professor of radiology at the University of South Alabama College of Medicine and an interventional radiologist with USA Health, presented the July Med School Café lecture.

In his talk, he discussed abnormal uterine bleeding from an interventional radiology perspective, specifically uterine artery embolization as a treatment option for symptomatic fibroids.

Posted by Med School Watercooler at 2:25 PM No comments:

On a hot day in June, Madeline Tucker placed the tip of a stethoscope on a young girl’s chest and listened to what she’d only heard in a recording played in the classroom – the “whoosh, whoosh” of a heart murmur.

Tucker, a rising second-year medical student, was in West Africa, an ocean away from her classroom at the University of South Alabama College of Medicine in Mobile. “I’d never heard it on a real person before,” she said.

Tucker relayed her findings to a doctor on the medical mission trip, who confirmed the diagnosis, which could be attributed to a variety of causes, including anemia. “It was rewarding to see things you’ve learned about happen in real life,” she said.

The 11-day trip, organized by the Christian Medical Ministry of South Alabama, included 26 participants, 16 of whom were medical students who had just completed their first year of studies at the USA College of Medicine.

“Having our students participate in medical missionary trips such as the recent one to West Africa allows them to hone these time-honored skill sets in an environment much different than their daily one,” said Dr. Kelly P. Roveda, associate dean of student affairs at the USA College of Medicine. “Additionally, these trips provide students firsthand exposure and a glimpse into the real world of health care disparity.”

The mission team set up a clinic in a village in West Africa, bringing health care two hours closer to local residents. They organized stations for triage, medicine, lab, pharmacy, optometry and physical therapy. The group also distributed toys and clothes to children.

“They were so thankful that we came,” said Tucker, who was raised in Scottsboro, Ala. “The experience opened my eyes to the lack of access to health care in some parts of the world.”

The austerity of the living conditions – no running water or modern toilets – was challenging to the students and gave them an opportunity to bond with each other, she said. “I’d never been on a foreign medical mission trip, so I didn’t really know what to expect. I came back with clinical experience and also an appreciation of what I have,” she said.

It was also the first medical mission trip for Dr. Rebecca Sollie, assistant professor and assistant clerkship director in USA’s department of family medicine. “It is a wonderful opportunity for medical students to take the knowledge and skills that they have acquired during their training and put them to use in a more independent role than they may be able to have during their clerkship rotations,” she said. “It was especially rewarding to see their skills and confidence grow as they made a noticeable difference in their patients’ lives.”

The opportunity to participate in medical missions was one of the factors that drew Tucker to the USA College of Medicine after graduating in biomedical sciences and Spanish from Auburn University. She’s also a legacy; both of her parents earned medical degrees here in 1991.

This summer, Tucker is conducting research under the supervision of Dr. William Kilgo, assistant professor of neurology, and is also helping at a student-run clinic at the Salvation Army as she prepares to enter her second year.

Posted by Med School Watercooler at 1:02 PM No comments: 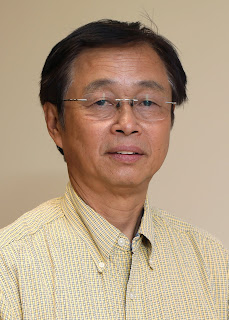 Jiamin Teng, M.D., Ph.D., came to the United States in 2000 with a dream to advance scientific developments in the field of pathology.

He recently joined the University of South Alabama College of Medicine as an associate professor in the department of pathology.

“During the past two decades of renal pathology studies and research, the most rewarding time is always when I fulfill a new project which could lead to the next-level exploration,” Teng said, “especially when a new model is created and new findings are revealed and published.”

Born in Suzhou, China, Teng earned his medical degree from Changzhi Medical College in Changzhi, China. He went on to earn a Master of Medical Science from Tongji Medical University in Wuhan, China.

After completing his medical degrees, Teng became an interchange scholar to Japan, where he finished his Ph.D. study and served as an assistant professor at Nihon University School of Medicine in Tokyo.

He came to the United States as a postdoctoral scholar in the field of renal pathology at Louisiana State University Health Sciences Center in Shreveport. Since 2012 he served as an assistant professor in LSU’s department of pathology and translational pathobiology before joining the faculty at the USA College of Medicine.

Teng’s major research focuses on the pathogenesis and the damage mechanism of mutated immunoglobulin to the kidney, and how the damaged kidney could be repaired or restored using stem cells.