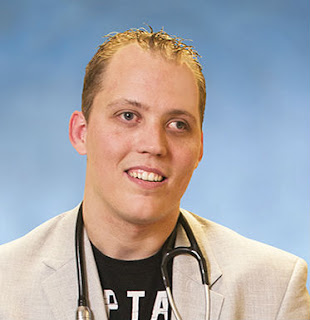 Dr. Tyler Sexton, chair of pediatrics, wound care and hyperbaric machine at Singing River Hospital System in Pascagoula, Miss., will address USA graduates during the ceremony on May 5 at 9:30 a.m. at the USA Mitchell Center.

Dr. Sexton completed his residency training with USA Health in 2010 and now serves not only as a pediatrician, but also as a lifelong patient as he was diagnosed with cerebral palsy during early childhood.

At age 4, his mother was told he would never walk, talk or even see, and that he needed to be placed in a special school because, at the time, public schools didn’t have resources for his special needs. However, Sexton took and passed his test to receive his driver’s license. He went on to earn his medical degree from the University of Sint Eusatatius in Barbados and also pursued his passion for scuba diving — climbing the ranks of recreational scuba diving to turn that passion into his career as a hyperbaric physician.

Sexton is known for mentoring children with disabilities and working with numerous special interest groups to educate them about hyperbaric medicine and its medicinal effects in many clinical applications. He uses his knowledge to treat individuals suffering from decompression illness and other illnesses where hyperbaric clinical applications can make a difference in lives. He has volunteered his knowledge for treatment of people in the United States. He also holds numerous certifications in wound care and hyperbaric healing and is active in many professional medical organizations.

Sexton and his mother, Lisa Sexton, are the authors of “God Bless Those Little Legs,” which tells his personal story as well as outlining his belief system and philosophy for overcoming adversity.

Degree candidates in the morning include students in the USA College of Medicine, College of Arts and Sciences, College of Education and Professional Studies, School of Computing, and Graduate School.

The Mitchell Center will be open to the public at 8 a.m. for the morning ceremony. Following that ceremony, the building will close to the public, then re-open at noon for the afternoon ceremony.

Parking signs will be posted throughout campus, and shuttle service will be available for guests who park in these areas. The shuttle service will run from 8 a.m. until 6 p.m. Pick-up and drop-off points for the shuttles will be in the following parking lots: University Commons, Gamma Dorm, Humanities Building, Whiddon Administration Building, Jaguar Drive (past the HKS East Entrance and Old Shell Road) and the Computer Services Center.

Posted by Med School Watercooler at 10:31 AM No comments:

Dr. Thomas Rich, professor of pharmacology at the University of South Alabama College of Medicine, recently received an award from the American Heart Association (AHA) to fund an undergraduate summer research program at the USA College of Medicine.

According to Dr. Rich, undergraduate research is a well-recognized vehicle for promoting student success. “The goal of this program is to provide a training environment that prepares undergraduate students for competitive graduate programs in the biomedical sciences,” he said. “The program provides research experiences to train students in laboratory skills and experimental design, as well as interactive workshops that target professional development.”

The program focuses on five multidisciplinary projects at the intersections of engineering, physiology and biochemistry. “Participating undergraduate students will conduct research under the mentorship of program faculty, explore the implication of the research with peers through both formal and informal discussion groups and present their research at an end of the program symposium,” he said. “Through this program, students will gain the experiences that they need to develop into the next generation of scientists examining cardiovascular physiology and pathophysiology.”

Dr. Rich said Dr. Jack Shelley-Tremblay, director of the office of undergraduate research at USA, was instrumental in developing the infrastructure required for effective undergraduate research programs. Jennifer Collins, grants administration specialist for the USA Center for Lung Biology, and Angie O’Neal, graduate advisor for the USA basic medical sciences Ph.D. graduate program, also played critical roles in establishing and maintaining grants. “Although this award is modest in size, it is a product of a great deal of effort by faculty and staff across USA,” he said.

Dr. Rich said he is excited to welcome the first cohort of students this May. The award supports four undergraduate students from different universities for three years. The students are selected based on academic record, research interest and performance, and potential for developing productive research careers.

Since 1949, the AHA has invested more than $4.1 billion in research to enhance our knowledge of cardiovascular diseases and stroke. To learn more about the AHA, click here.
Posted by Med School Watercooler at 3:05 PM No comments: 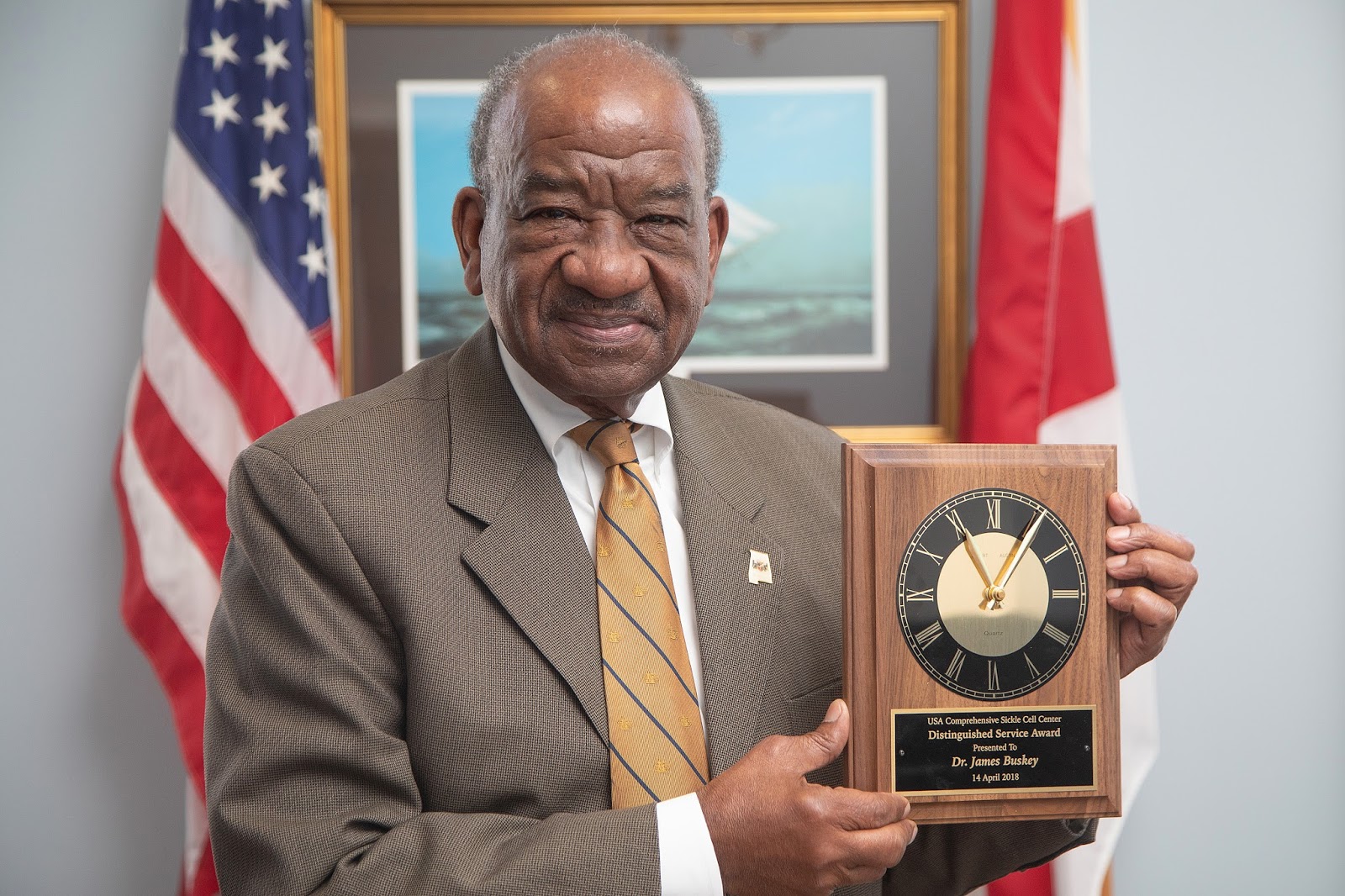 State Rep. James Buskey received the Distinguished Service Award on April 14 at the 16th annual Sickle Cell Regional Conference. Representing Alabama’s 99th District in the House of Representatives, he has been a fervent supporter of the sickle cell community throughout his 42 years in the Alabama Legislature.

One of the longest-serving legislators in Alabama history, Rep. Buskey recently announced his retirement from politics. Dr. Johnson Haynes, professor of internal medicine and director of the University of South Alabama Comprehensive Sickle Cell Center, said Rep. Buskey leaves his mark of excellence and integrity at the local, state and national level as a teacher, administrator, legislator and civic leader.

“Throughout the state of Alabama, the sickle cell community often refers to him as ‘Mr. Sickle Cell,’” Dr. Haynes said. “This is a title that’s well deserved for his untiring work related to improving the state of knowledge and healthcare delivery throughout Alabama.”

“Sickle cell affects a lot of people that I represent in the black community,” Rep. Buskey said. “So, whenever there was an opportunity to impact the budget for sickle cell, I did everything I could.”

Of major significance is House Bill 528, which was passed in 1982 and prohibited insurance companies from denying coverage based on the diagnosis of sickle cell anemia; House Bill 250, which led to the establishment of the Sickle Cell Oversight and Regulatory Commission (SCORC) in 1996; and SJR 144, which supported the Sickle Cell Pilot Program in the Mobile County Public School System in 2009.

“Over the years funding cuts have been common, and many agencies have been excluded from the ETF,” Dr. Haynes said. “Rep. Buskey has either sponsored or co-sponsored legislation regarding appropriations to the Sickle Cell Education Program that has led to its sustainability.”

Rep. Buskey is a founding member of Franklin Primary Health Center in Mobile, and served on the board of directors and advisory board of Franklin for 40 years. In addition, he is founder and former board member of Commonwealth National Bank.

A career educator, Rep. Buskey worked in the public school system for 33 years as a teacher, assistant principal and administrator. He received a Bachelor of Science in secondary education from Alabama State University, Master of Arts in Teaching from the University of North Carolina at Chapel Hill, and Specialist in Education degree from the University of Colorado in Boulder.

Posted by Med School Watercooler at 11:39 AM No comments:

The latest issue of CURRents, a newsletter published by the University of South Alabama College of Medicine Division of Medical Education, is now available.

The curriculum committee newsletter aims to inform USA College of Medicine faculty, residents and students about ongoing developments and outcomes in the undergraduate medical education program.

The latest issue focuses on the USA College of Medicine’s extensive preparation for the upcoming accreditation site visit by the Liaison Committee on Medical Education in October 2018.

Click here to view the current newsletter and to subscribe.
Posted by Med School Watercooler at 9:14 AM No comments: