Dr. James M. Downey, a world-renowned heart researcher, and Dr. James C. Parker, a scientist credited with improving respiratory care around the world, have both retired after more than three decades in the physiology department at the University of South Alabama College of Medicine.

According to Dr. Thomas Lincoln, chair of physiology at USA, Drs. Downey and Parker are among the best scientists USA can boast. “In addition, they are also two really fine people to be associated with,” he said. 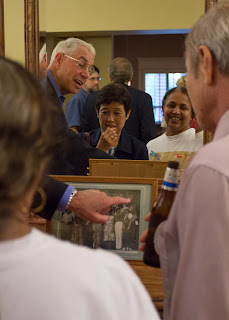 Dr. Downey, an international leader in cardioprotection who has been with the physiology department since 1975, has made major contributions to our understanding of the mechanisms responsible for heart attacks and of the therapies to alleviate such injury. Much of the progress in this area is credited to his work.

Dr. Parker, who has been in the same department since 1977, has been an enormous contribution in the understanding of pulmonary function and ventilator-assisted therapy.

Both scientists have been funded by the National Institutes of Health for decades. They have trained dozens of scientists – both national and international – and have been involved in the department’s teaching efforts for many years. “As far as interests in cardiovascular and pulmonary research, it’s fair to say that those two areas are the strongest right now in our department because of them,” Dr. Lincoln said. “It will be part of their legacy at USA.”

Dr. Parker, who was involved in the establishment of the USA Center for Lung Biology, said he is most proud of his research on ventilator induced lung injury, which led to a large-scale clinical study involving seven medical centers using a reduced tidal volume to ventilate patients with acute respiratory distress syndrome (ARDS).

“This change in treatment significantly reduced the high mortality of some 40-50 percent and a protective ventilation strategy has been largely adopted as the standard of care worldwide,” Dr. Parker said. “This has resulted in thousands of lives being saved in intensive care units.”

Dr. Downey’s research focuses on protecting the ischemic heart, a problem that occurs when the heart muscle receives insufficient blood flow. His NIH grant is now in its 32nd year of continuous funding.

For his outstanding scientific achievements, Dr. Downey was presented the Peter Harris Distinguished Scientist Award by the International Society for Heart Research (ISHR) at their world congress in Kyoto, Japan, in 2010. He has been active in the governance of the ISHR since the 1980s and served as president of ISHR-International from 2001 to 2004.

Both Drs. Downey and Parker said they have enjoyed the congenial working relationship and collaboration with members of the physiology department, as well as many other departments both at the medical school and throughout the University. “The comradery of the school has been wonderful,” Dr. Downey said. “Everyone has been great to work with.”

Throughout the years, Dr. Downey said the department has been tremendously successful. “Our funding rate has always been impressive, and our small department has achieved a great international reputation.”

When Dr. Parker arrived at USA in 1977, only three medical classes had graduated. “Coming from a high-powered research physiology department at the University of Mississippi Medical School to empty labs was a challenge,” he said. “We had to not only obtain equipment and supplies but also obtain certification for the College of Medicine for use of radioisotopes and disposal of radioactive waste.”

Dr. Parker said the physiology faculty’s common background in cardiovascular physiology, as well as the strength in pulmonary circulation disorders, allowed the department to achieve a high degree of recognition for a relatively small medical school. “These strengths were complemented some years later by pharmacology professors with similar interests,” he said, “and it continues to this day.”

Dr. Downey, who doesn’t plan to quit research anytime soon, said his lab is still open and running. “Being a scientist is the best job in the world, and I would miss it terribly,” he said.

Both researchers are looking forward to devoting more time to their respective hobbies – Dr. Downey collects vintage motorcycles and Dr. Parker has been a competitive swimmer and sports enthusiast for many years. Their passion for research, however, will never end.

“I don’t think I’ve missed a single day in the office since I retired a month and a half ago,” Dr. Downey said. “They say the retirement police will get after me if I keep coming in like this,” he added.

The physiology department held a retirement reception for Drs. Downey and Parker on May 18, 2012, at the USA Faculty Club.

“They’ve both had a huge impact,” said Dr. Lincoln, who praised the researchers for their devotion to their work. “They deserve retirement. But with that retirement, we have two very large pairs of shoes to fill.” 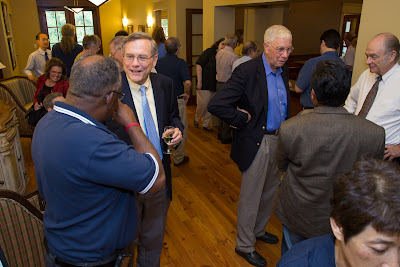 Posted by Med School Watercooler at 2:58 PM No comments:

Annual Medical Alumni Weekend to be Held Next Weekend

The USA Medical Alumni Association will be hosting its annual Medical Alumni Weekend on June 1-3, 2012, at Perdido Beach Resort in Orange Beach, Ala. All alumni, house staff and local physicians are invited to attend.

The Medical Alumni Weekend is held every summer to bring medical students back to the Gulf Coast to reminisce with fellow classmates and former faculty.

The family friendly event offers CME accredited programs, class reunions, and an alumni dinner sponsored by the association. This year the association will welcome back the seven classes who are celebrating reunion milestones: Classes 1977, 1982, 1992, 1997, 2002, and 2007.

The University of South Alabama is committed to making its activities accessible to all individuals, so if you are in need of special accommodation please do not hesitate to call or submit a description of your needs in writing.

Hotel reservations can be made by calling Perdido Beach Resort at 1-800-634-8001 or by going online to www.perdidobeachresort.com. The group reservation discount code is 7990. Pre-registration for the event is appreciated for catering purposes.

For more information, contact the Medical Alumni Office at (251) 460-6805 or e-mail medalum@usouthal.edu.
Posted by Med School Watercooler at 2:58 PM No comments:

“Courses for the CHIS program focus on the administration of consumer health services and resources to assist patients and patient families in making informed health care decisions in conjunction with their doctors and other health care providers,” Pugh said. “Having the hospital library staff achieve CHIS designation ensures that patients and families referred to the library for information on health concerns are receiving quality assistance.”

The CHIS program has given these Health Information Resource Center (HIRC) personnel more confidence in providing the best health care information possible to not only physicians, but to our patients and community.

“Traditionally, hospital libraries have worked with the professional staff to provide the evidence they need to treat patients the best, based on research proven practices,” Staggs said. “These classes introduced me to more patient assistance than I’ve been used to undertaking. Knowing how to develop services for patients and where to find quality health information written for the lay person has increased my confidence in working with this growing part of our user population.”

The CHIS program puts a special emphasis on providing patients access to the best resources and health information. The USA Biomedical Library has developed a consumer health information kiosk to link people to quality websites. The kiosk is located in the HIRC and is also available at: http://biomedicallibrary.southalabama.edu/health/.

“Health care providers can feel confident that patients and their families will receive quality assistance and reliable information,” Pugh said. “We, the library staff, strive to give the patrons the best consumer-based, easy-to-read information possible, so that they can make informed medical and health decisions in conjunction with their health care provider.”

With this certification, patients and physicians can feel more confident that they are receiving the most up-to-date information.

“We’re here to be so many things: a translator of medicine, a barrier to scams and a guide to those trying to learn about something that possibly before they always thought ‘would never happen to them,’” Hoven said.  “As our mission statement, we provide faculty, staff and students with access to information in the areas of research, teaching and patient care and are a health science resource library for the surrounding Gulf Coast area. As HIRC personnel, we are prepared to work with patients and provide the best information possible.”
Posted by Med School Watercooler at 2:58 PM No comments:

Caroline Gunn, former assistant to the dean of academic affairs at the University of South Alabama College of Medicine, passed away on May 16, 2012.

Gunn retired from the University in 2005, after 17 years of service.

Gunn was born in Hattiesburg, Miss., and raised in Jackson, Miss. She was a 1948 graduate of Central High School in Jackson, Miss., and she decided to continue her education at the age of 50 by attending college. Gunn was an avid reader and a published author of poems and short stories.

Condolences may be offered at www.radneyfuneralhome-mobile.com.

To view Gunn’s obituary published in the Press-Register, click here.
Posted by Med School Watercooler at 2:57 PM No comments: