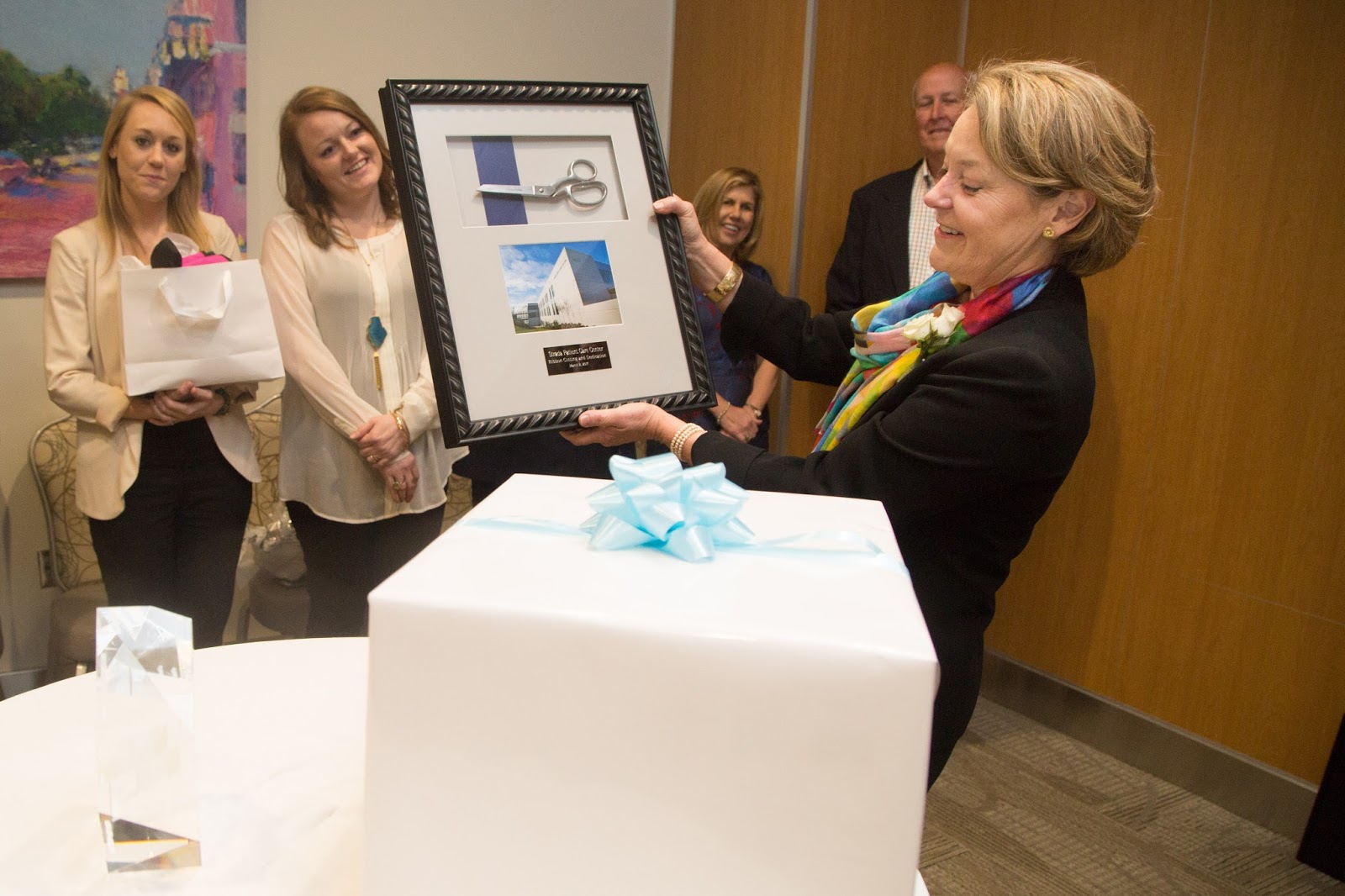 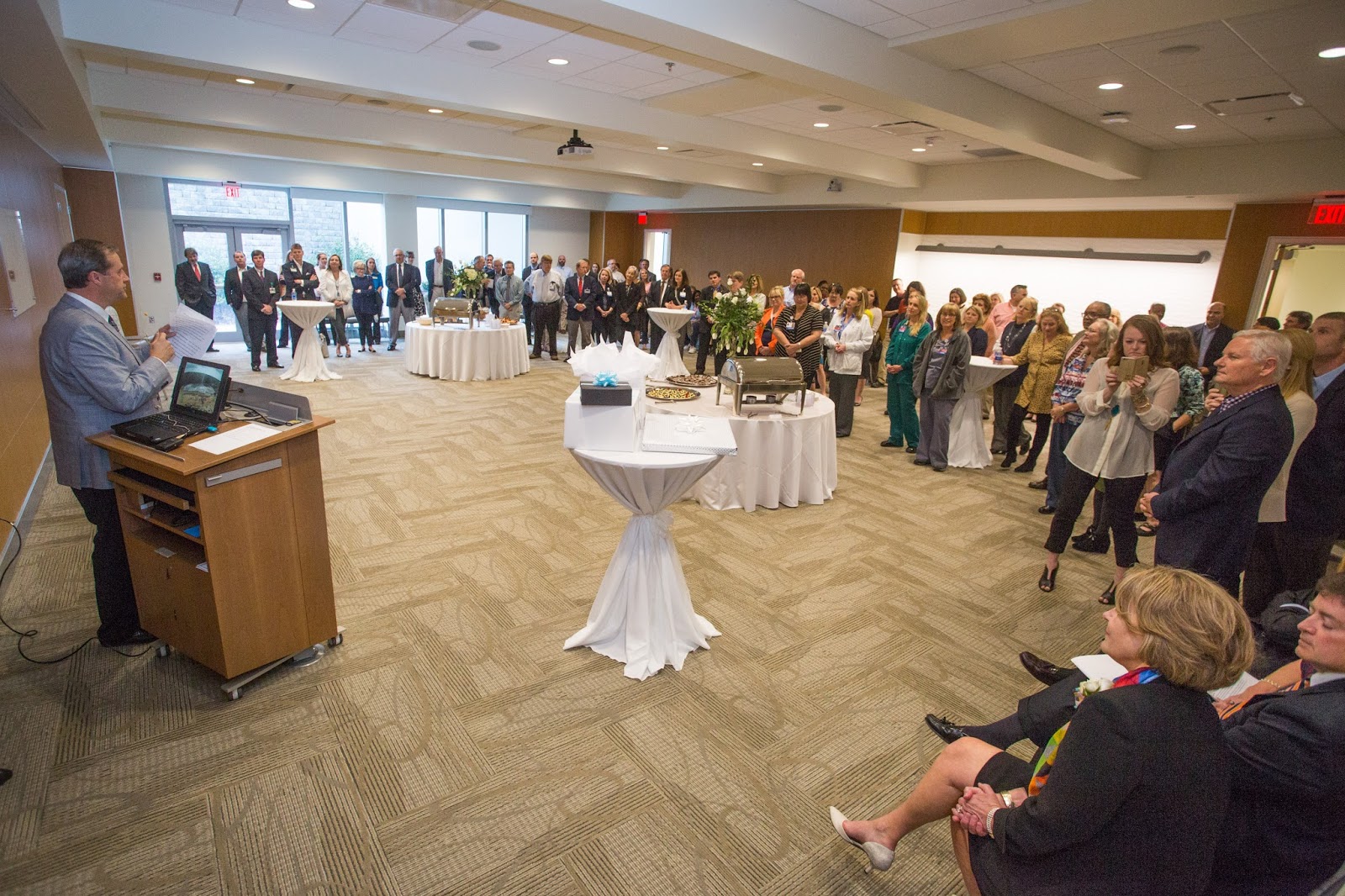 Tate began her career as a young professional at USA Medical Center in 1978 serving as an assistant administrator. She was named executive director of PrimeHealth and later became president for the HMO. In 1999, she joined the USA Physicians Group as chief executive officer and served in that role for 17 years.

Throughout her careers at USA, Tate has made significant contributions to the mission of USA Health. She was instrumental in the development of USA Children’s & Women’s Hospital, PrimeHealth, the USA Physicians Group practice and most recently the Strada Patient Care Center.

Tate earned her bachelor of science degree from Auburn University and her master of science in hospital and health care administration from the University of Alabama at Birmingham.

View more photos from the reception here.
Posted by Med School Watercooler at 4:49 PM No comments: 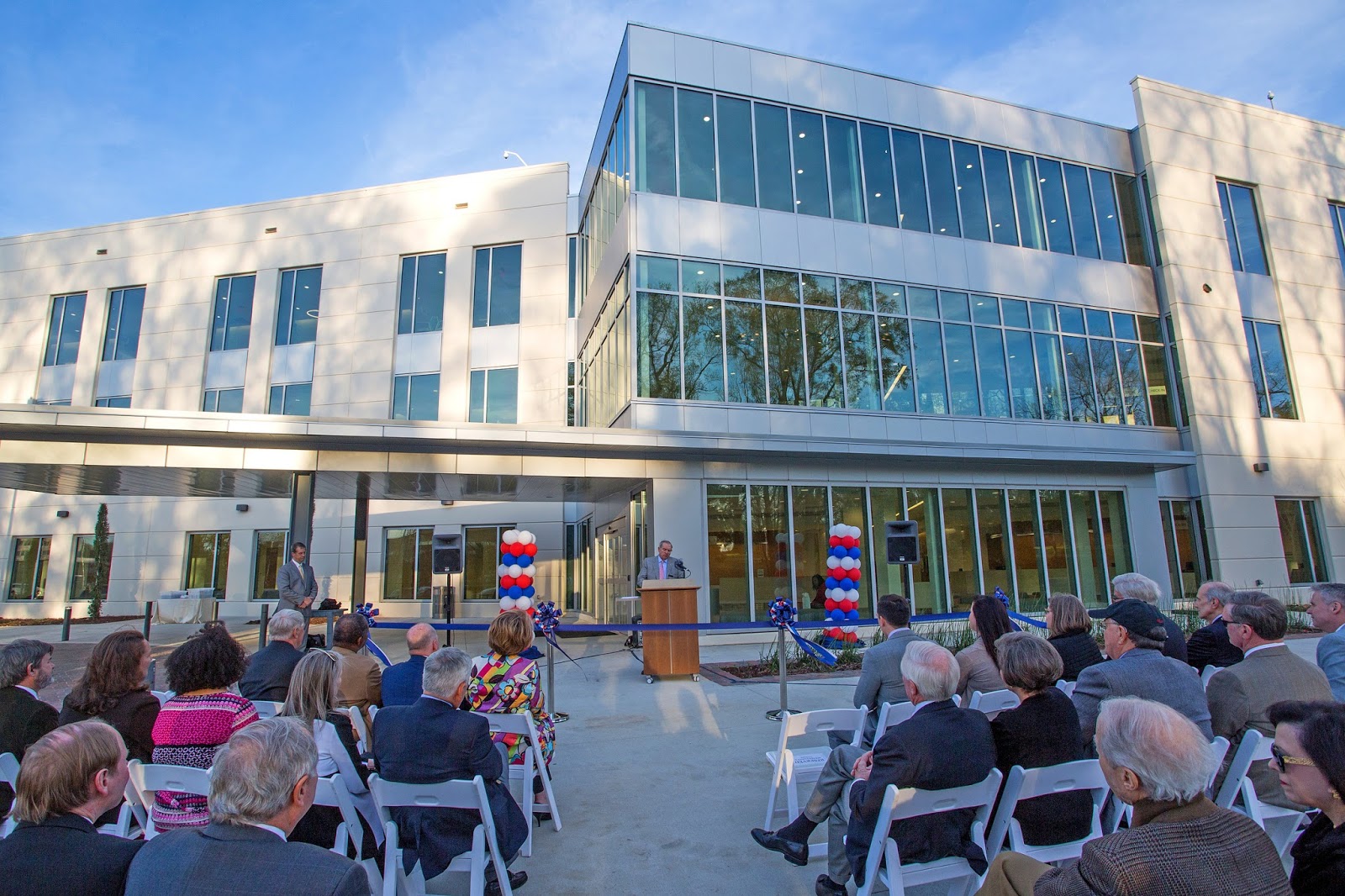 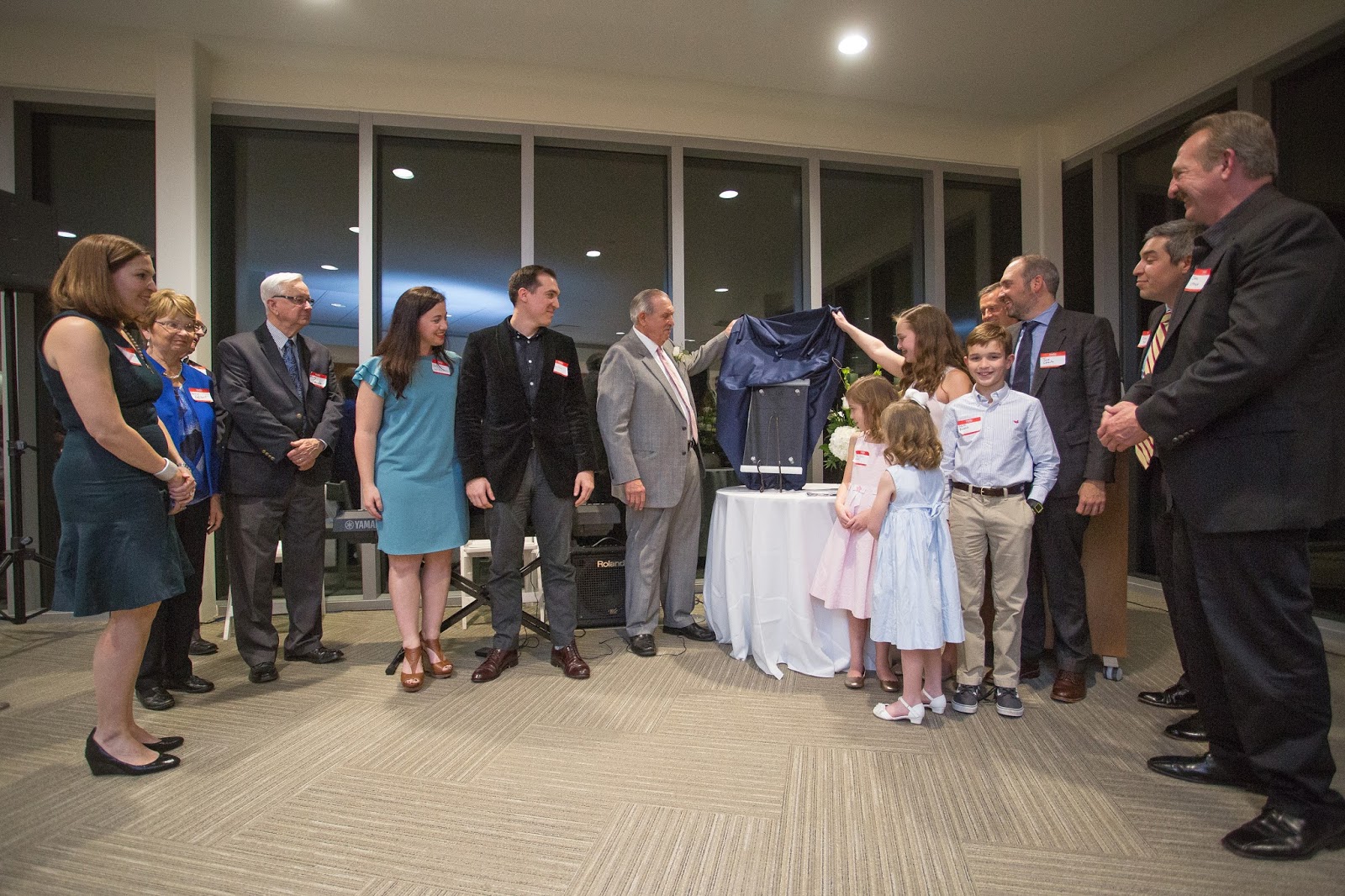 The events were held to celebrate the opening of the building and to honor Dr. Samuel J. Strada, dean emeritus of the University of South Alabama College of Medicine, and his late wife, Judy.

At USA, there are only two examples of the institution naming a building in honor of the impact made by a person during their career and life. The first is the Frederick Palmer Whiddon Administration Building, named in honor of USA’s founding president Dr. Whiddon. The second is the Strada Patient Care Center named in honor of both Dr. Strada and Judy for their collective, indelible impact on the advancement of medicine, as well as their generosity to their community.

At the ribbon cutting ceremony, USA President Dr. Tony G. Waldrop discussed the significance of the building. “Inside the building are clinics filled with dedicated, caring professionals who provide health and wellness to those who are sick and injured,” Dr. Waldrop said. “Also ever-present are our faculty who mentor and provide medical educational opportunities to those who are dedicating their lives to serving others, as well as clinical investigators providing an environment where new and better treatments are made available. All of these things will be part of the Strada Patient Care Center and are all a tribute to both Sam and Judy Strada.”

During the grand opening celebration, speakers recalled personal memories shared with Dr. Strada and Judy, discussed the reasoning behind naming the building in their honor, and outlined the significance of the Strada Patient Care Center for USA Health.

Dr. John Marymont, vice president for medical affairs and dean of the USA College of Medicine, thanked the people who work in the Strada Patient Care Center. “Today we celebrate the completion of a building. For you, it is a beginning. Each day moving forward, your talents and expertise that you share along with your compassion and dedication to our patients and their families are what make this new building such a special place.”

The grand opening ceremony concluded by unveiling a plaque dedicated to the Stradas that will be placed at the entrance of the Strada Patient Care Center.

A large portion of the USA Physicians Group practice including general pediatrics, pediatric subspecialties, obstetrics and gynecology, neurosciences and orthopaedics, X-ray and orthopaedic rehabilitation moved to the new building. To learn more about the Strada Patient Care Center, visit www.usahealthsystem.com/strada.

Click here to view more photos from the event.
Posted by Med School Watercooler at 11:10 AM No comments:

This symposium is designed for health care professionals involved in the management of trauma and critically ill patients. It will provide physicians, surgeons, residents, nurses, technicians, EMT and EMS personnel with evidenced-based concepts and techniques in critical care in today’s world. The symposium will feature three 15-minute lectures and a question-and-answer section for each session, with discussion panels following the lectures.

The 10th annual William A. L. Mitchell Endowed Lectureship in Traumatology and Surgical Critical Care will be held in conjunction with the seminar. This memorial lecture is presented annually to honor the life of William A.L. Mitchell, who passed away in 2005 from severe traumatic injuries sustained in a car accident. This year’s keynote speaker will be Dr. Steven Wolf, an established researcher and internationally renowned physician from the University of Texas Southwestern Medical Center. Dr. Wolf is a national and international leader in the field of burns, trauma and surgery. This lecture will also take place at the Renaissance Mobile Riverview Plaza Hotel in Mobile, Ala., on April 6.

For more information, contact Rebecca Scarbrough at (251) 471-7971 or visit http://www.usahealthsystem.com/trauma-symposium.
Posted by Med School Watercooler at 11:01 AM No comments: 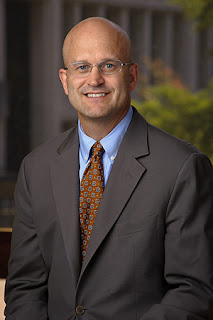 This year’s William A. L. Mitchell Endowed Lectureship in Traumatology and Surgical Care hosted by the University of South Alabama Department of Surgery will feature Dr. Steven Wolf, Golden Charity Guild Charles R Baxter MD Chair, professor and vice-chair for Research  and the Burn Section Chief at the University of Texas Southwestern Medical Center in Dallas.

The lecture will take place April 6, 2017, at 4:30 p.m. at the Renaissance Mobile Riverview Plaza Hotel in Mobile, Ala. It is held in conjunction with the 8th annual Greater Gulf Coast Trauma and Acute Care Surgery Symposium.

The lecture is presented annually in memory of William A. L. Mitchell, who passed away in 2005 from severe traumatic injuries sustained in a car crash. In appreciation for the care he received at the USA Trauma Center, his family established the endowed lecture series to memorialize their son and brother and to improve trauma patient care in our region through education. He was a senior at UMS-Wright Preparatory School at the time of his death.

The USA Trauma Center is this region’s only Level I Trauma Center, serving as a community resource for citizens throughout the central Gulf Coast region. The center provides the highest level of care for critically ill and injured patients.

For more information about the lecture, contact Rebecca Scarbrough at (251) 471-7971.
Posted by Med School Watercooler at 10:58 AM No comments: 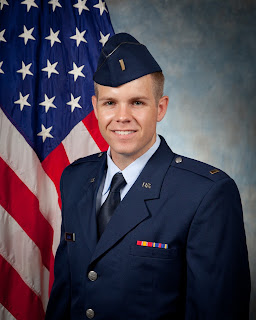 Carter Tisdale, a fourth-year medical student at the University of South Alabama College of Medicine, recently matched in an early match program in the military.

The majority of medical students go through the National Resident Matching Program (NRMP) to find out where they will be doing their residency training following graduation, but students who wish to match in the military participate in a specialty match program that takes place months before Match Day March 17.

A native of Knoxville, Tenn., Tisdale has served in the United States Air Force since 2013. Following graduation he will become a flight surgeon on active duty.

Tisdale matched at San Antonio Military Medical Center in San Antonio, Texas, where he will complete his internship. “This intern year will set me up well for a two-to-three-year stint as a flight surgeon in the Air Force, as the year is designed to provide medical officers with the unique aspects of medical training in a military setting,” he said. “An Air Force flight surgeon is a general medical officer tasked with taking care of a base or unit’s pilots, personnel and families.”

According to Tisdale, serving as a flight surgeon prior to entering his specialty of choice will allow him to start paying back his service commitment and broaden his experiences.  “The reason I ultimately decided to forego applying for ophthalmology straight out of medical school was because I knew I would most likely never do something as unique as flight medicine after training in a medical subspecialty,” he said. “After serving as an active duty medical officer for those few years, I plan to apply to the San Antonio Military Medical Center’s ophthalmology residency program.”

Although the Health Professions Scholarship Program initially sparked his interest in the military, Tisdale said he now has a deeper appreciation for his decision to pursue military medicine. “I joined the Air Force on blind faith, but I have gradually come to realize how well the lifestyle and culture fits me,” he said.  “Regardless of where I am stationed, I will be able to do what I love: entering the lives of others within the context of physical, emotional and spiritual healing.”

During Honors Convocation in May, Tisdale will take the military oath of office and receive his new military rank coinciding with completion of his medical degree.

The remainder of the USA College of Medicine Class of 2017 will find out where they matched on Match Day, March 17, 2017. The event will take place at the Mobile Convention Center in downtown Mobile. Click here for more information.
Posted by Med School Watercooler at 10:51 AM No comments: