Going the Distance: Running for a Purpose 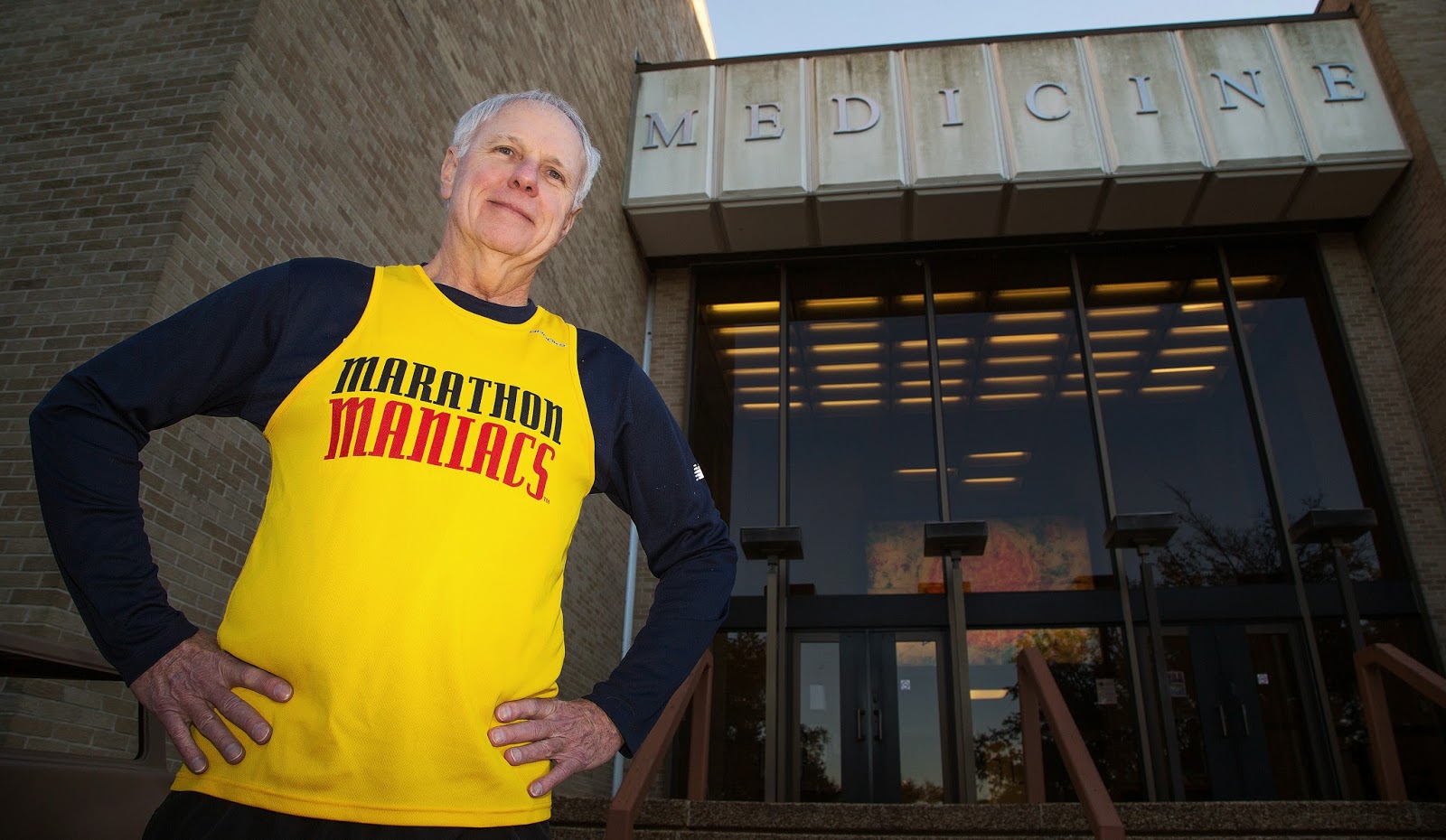 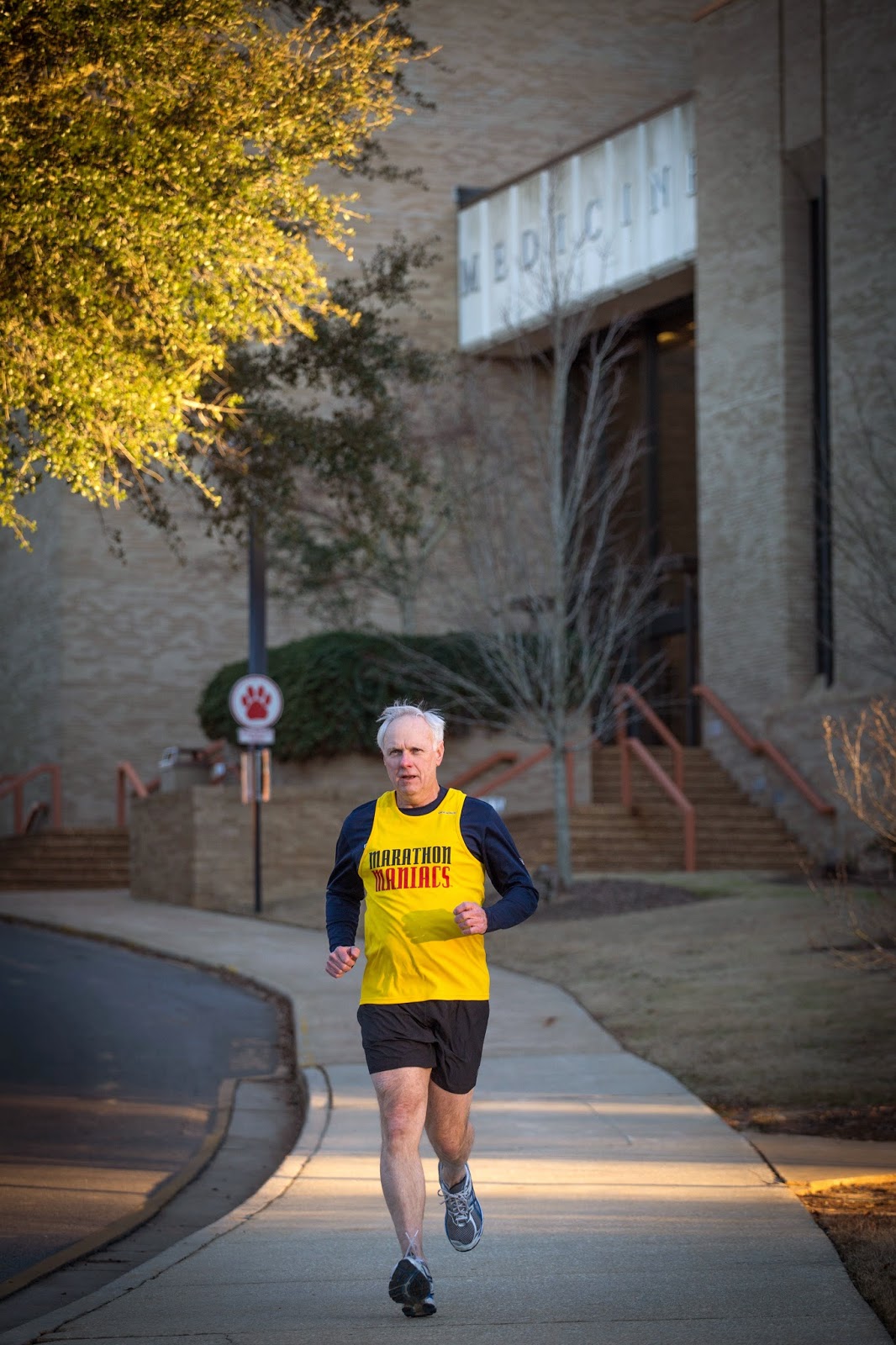 “I look at my leukemia as a blessing,” said University of South Alabama College of Medicine professor Dr. Phillip Fields. “Without it, I would have missed out on so much this country has to offer.”

Dr. Fields, associate professor of anatomy at the USA College of Medicine and an avid runner, was diagnosed with leukemia in 2007 and given five to seven years to live. He was told to give up his passion of running marathons for fear of hemorrhaging or a ruptured spleen.

Instead, he set out to run marathons across the country. “For a year, I followed the advice from the oncologist at MD Anderson,” he said, “but I ultimately decided that if I was going to die with leukemia, I would die doing what I loved – running marathons.”

Fortunately, my oncologist at the USA Mitchell Cancer Institute, Dr. Thomas Butler, was always positive. Together we worked out a strategy to monitor whether running a marathon negatively impacted my condition.

Dr. Fields, who qualified for the Boston Marathon twice before his leukemia diagnosis, began traveling to places he had always wanted to see, but had always found an excuse not to do so. He no longer wanted those excuses to clutter his life – or to prevent him from living.

So, in February 2009, Dr. Fields began a journey to complete a marathon in every state plus Washington D.C. – 51 marathons in 47 months. “My goal allowed me to focus on training and planning trips with sightseeing each month,” he said. “There wasn't time to think about leukemia. Running was the only way to completely take my mind off the ticking bomb.” In spite of five months of chemotherapy and a fractured sacrum, Dr. Fields completed his goal in December 2012 at the Roxbury, Conn., Marathon. It was a goal that would become one of many.

“My parents always stressed to us that you shouldn’t start something that you don't intend to finish,” he said. “The completion of a marathon in all 50 states resulted in a strong feeling of accomplishment.”

Along the way, Dr. Fields thought he would again qualify for the Boston Marathon. However, cancer-related fatigue was a constant running companion and prevented him from doing so. “When I began my 50 states goal, Boston was supposed to be the final one,” he said.

Recently, Dr. Fields took on a fundraiser, the ALLY Foundation, to help him get back to Boston. By raising a minimum of $5,000, Dr. Fields will be given a racing bib for the 2015 Boston Marathon in April. “This particular marathon is unfinished business,” he said. “In a way, it is more significant this year than the first time I qualified in 1996.”

Now, Dr. Fields is using his story to inspire others. “I have received letters and e-mail responses from people who had given up hope, but decided to continue living life to the fullest until the end,” he said.

As a volunteer with the Leukemia Lymphoma Society’s First Connection Program, Dr. Fields is able to help others overcome some of the same challenges he faces. “I've been through the roller coaster experience of being told you have cancer, the denial, the anger, and the depression,” he said. “Then the wait and watch, the chemotherapy, the remission, and the continued wait and watch for its return. I believe I have a lot to offer people.”

He tells others these things – to live each day as if it is your last; to challenge your limits instead of limiting your challenges; and to stop procrastinating on things that aren't important. “Someone once said, ‘We spend so much time making a living that we forget to live,’” Dr. Fields said.

As a professor at the USA College of Medicine, Dr. Fields is also shaping the lives of future medical students, while at the same time giving them a lesson in determination and persistence. “Hopefully my students see my faith and drive in the face of adversity and realize they can do the same,” he said. “I hope they learn to become the best doctor they can possibly be.”

He says it is his belief in God and running that has helped him stay positive throughout his journey, which in turn, has strengthened his desire to give back even more to his students. “I always enjoyed teaching, but my passion toward students has grown exponentially since being diagnosed with leukemia,” he said.

Dr. Fields said he is overwhelmed with the support he has gotten from friends, faculty and the medical and physician assistant students.  “None of these people can begin to imagine how important the Boston Marathon is to me, but still they have been exceedingly generous,” he said. “They are all loved for what they have done for me."

After running the Boston Marathon this April, Dr. Fields hopes to complete marathons in all of the Canadian Provinces. So far, he’s completed eight of 10. His next goal is to run 100 marathons with leukemia by the end of this year.

To help Dr. Fields return to Boston, complete his book, and support a great charity, visit https://www.fundraise.com/activity/ally-foundation/team-ally-2015. Scroll down to Phillip Fields’ Road to Boston and click donate. The ALLY foundation is a national 501(c) (3) not-for-profit organization that is working to end sexual violence in the United States.

Click here to purchase a "Fields Tough" t-shirt. All proceeds will benefit Dr. Fields' Boston Marathon fund.
Posted by Med School Watercooler at 9:55 AM No comments:

The University of South Alabama Center for Healthy Communities recently hosted its 2015 Faculty Forum, "Encouraging and Supporting Community Engaged Research & Scholarship at USA: A Day of Learning, Networking & Planning." The forum disseminated the principles and value of community engagement and participatory research.

Dr. Linda Silka, a national-level expert on community engagement, was the keynote speaker. Dr. Silka has written extensively on the challenges and opportunities of building research partnerships with diverse communities and has consulted internationally on how to build community-university research partnerships.

Click here to view more photos from the event.

The Center for Healthy Communities is the lead entity within the University for coordinating community education, research, public service and health activities to help eliminate health disparities, foster access to health care for underserved populations and enhance the capacity of individuals to better participate in decision making about their health. Click here to learn more.
Posted by Med School Watercooler at 9:54 AM No comments: 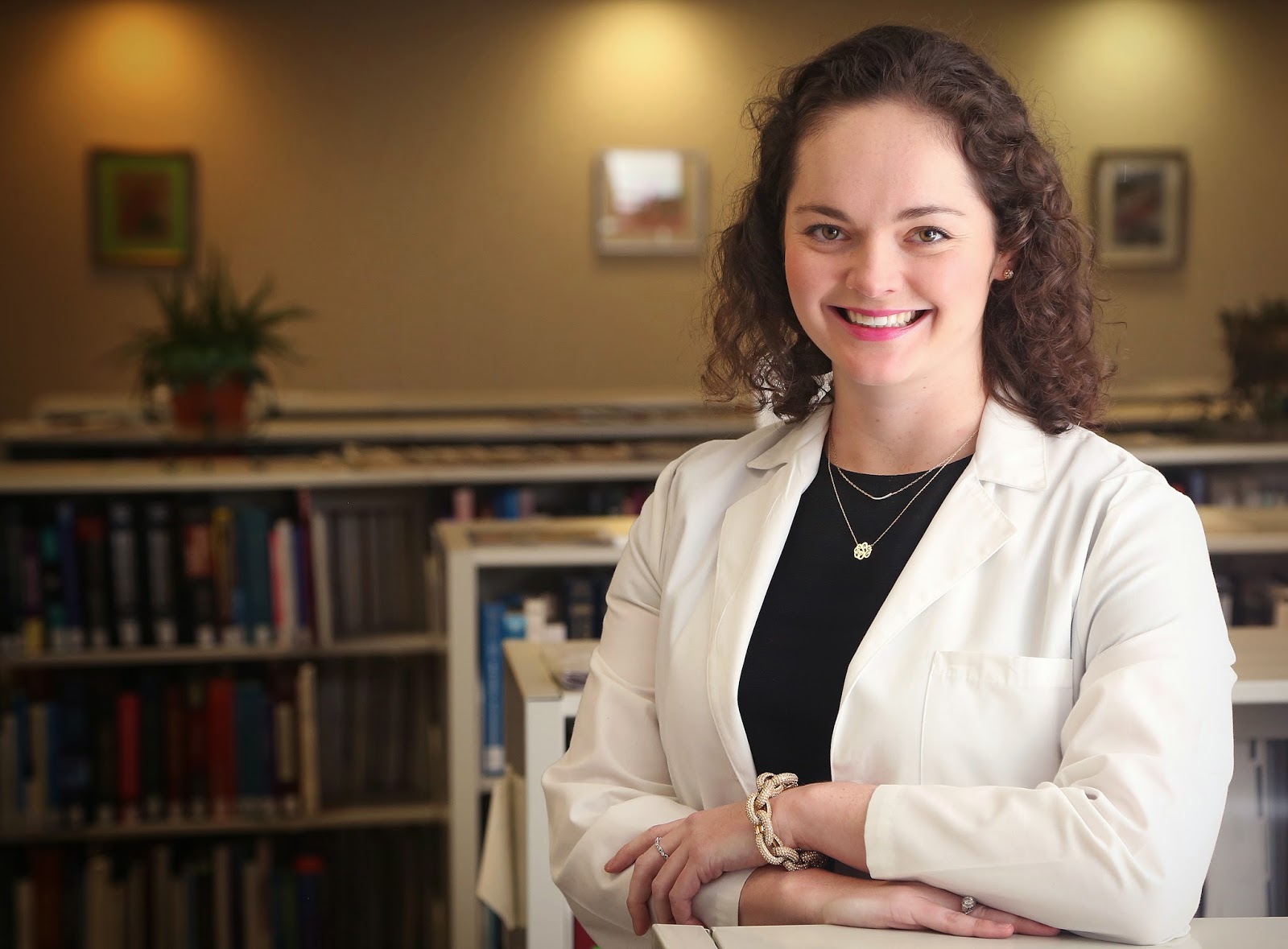 Emily Spurlin, a second-year medical student at the University of South Alabama College of Medicine, was a co-author in a research article published in the international medical journal The Lancet. Spurlin, along with other researchers, published findings from a research project funded by the National Institute of Allergy and Infectious Disease investigating the effects of novel hepatitis C virus treatment regimens.

The hepatitis C virus, more commonly known as HCV, is a transmittable liver disease that ranges from a mild illness lasting only a few weeks to a more serious, lifelong illness that attacks the liver. The HCV infection is able to spread primarily through contact with the blood of an infected person.

“I was drawn to this research after a college course on virology spiked my interest in these viruses,” Spurlin said. “I found it fascinating this virus - which is essentially just big bags of genetic material - is able to have such a profound impact on the human body.”

The medications used in the research project act directly against HCV to kill the virus in contrast to current HCV treatments, which act to increase patients’ immune response.  The results of the study were very promising and showed high cure rates for HCV infection and high tolerability by the study’s participants.

The new treatment regimens tested in the trial have the potential to greatly impact patients with HCV. These treatments have less potent side effects and have a shorter duration of treatment than traditional medications for HCV, making the treatments a more realistic option for most patients.

“I think it is important for medical students to be involved in research,” she said. “The medicine we will practice in our careers is based on peer-reviewed medical research, and understanding this process will give students a greater knowledge and appreciation of evidence-based medicine.”
Posted by Med School Watercooler at 9:19 AM No comments: 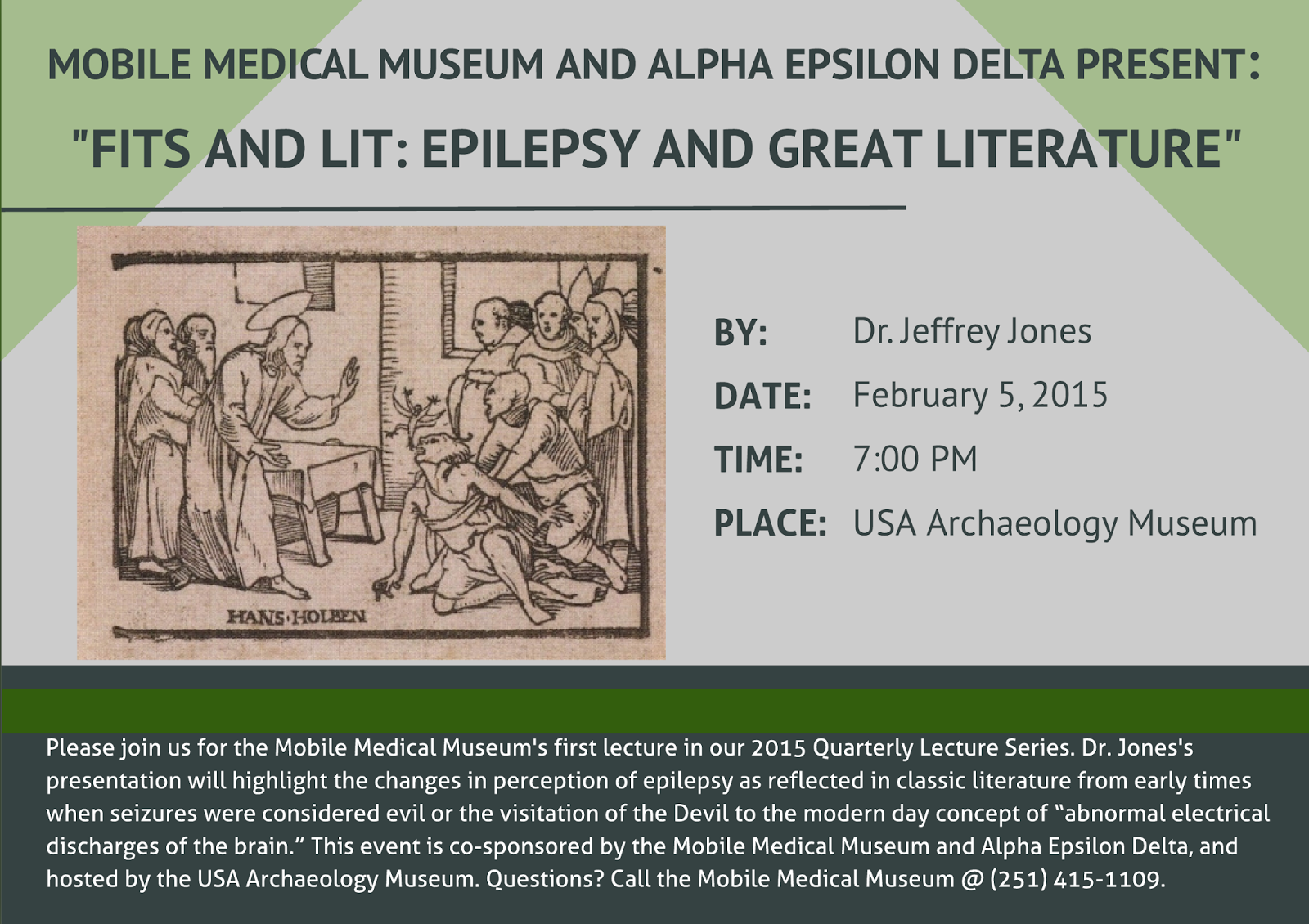 The first lecture of the Mobile Medical Museum's 2015 Lecture Series will take place Feb. 5, 2015, at 7 p.m. at the University of South Alabama Archaeology Museum.

Dr. Jeffrey Jones, a neurologist in private practice in Battle Creek, Mich., will present "Fits & Lit: Epilepsy and Great Literature." His lecture will highlight the change in perception of epilepsy as reflected in classic literature from early times when seizures were considered evil or the visitation of the Devil, to the modern day concept of "abnormal electrical discharges of the brain."

Dr. Jones grew up in West Virginia, where he earned his undergraduate degree in chemical engineering at West Virginia University (WVU). He served as a 1st Lt. in the U.S. Army and after returning from Vietnam, he went back to WVU where he earned his medical degree. After completing an internship in Newport News and a residency in neurology in Charleston, he moved to Battle Creek, Mich., where he has been in private practice for more than 34 years.


This event is co-sponsored by the USA chapter of Alpha Epsilon Delta, a national honor society for students preparing for careers in the graduate health professions, and hosted by the USA Archaeology Museum. Light refreshments will be served following the lecture. For more information, contact the Mobile Medical Museum at (251) 415-1109.
Posted by Med School Watercooler at 11:47 AM No comments: