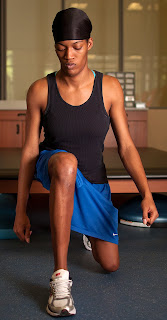 As with most athletes, the risk of having an injury while playing is always present. But with any strong-willed athlete, the urge to continue competing never ceases.

Shaniece Brunner, a single mom and a basketball star at the University of South Alabama, is one of those dedicated athletes.

Brunner, 23, tore her anterior cruciate ligament (ACL), one of the four major ligaments of the knee, on November 14, 2008, while playing against Southern Mississippi in Hattiesburg, Miss.

“The ACL is the most commonly injured knee ligament in athletes,” said Dr. Albert W. Pearsall, professor of orthopaedic surgery and director of sports medicine at USA. “It frequently occurs when the athlete has the knee near extension and lands in an awkward position. It is seen more frequently in women than men.”

“I felt the pop of my ligament tearing,” Brunner said. “It hurt like crazy at first, but after icing it during half time, I pretty much convinced myself that it wasn’t torn.” Brunner tried to convince her trainer to let her play the rest of the game, but her attempt was unsuccessful.


However, Brunner was determined to finish out the rest of the season on the court. She spent the next five weeks in rehab, strengthening her muscles. “Most of the difficulty came with re-learning what I could and couldn’t do because I was playing with a torn ACL,” she said. “I’ve never had any other major injuries in my basketball career.”
Dr. Pearsall performed surgery to repair Brunner’s ACL on March 31, 2010. “I took two tendons from the side of her knee, and reconstructed her ACL with these tendons,” Dr. Pearsall said. Utilizing a new technique used at only a few centers around the country, Dr. Pearsall performed a "double bundle" reconstruction of Brunner's ACL. Although this new technique better reproduces athlete's native ligament, it is technically more difficult to perform.
Less than three weeks after her surgery, Brunner was already off of her crutches and bending her knee at a 90 degree angle. “I was determined not to be on crutches for long,” she said.
Dr. Pearsall said that Brunner is ahead of schedule in her rehabilitation. “Ultimately, once she recovers, she should be able to return to all activities and sports without any limitations,” Dr. Pearsall said. “However, I cautioned her that she may want to take it easy in the future so as not to have to go through this entire process all over again.”
Because of her injury, Brunner learned that there is nothing that can keep her from doing what she wants to do, as long as you have the determination to keep going. “As long as there is a strong motivation to move forward, progression will not stop,” she said. “The key is to progress at a steady pace and never look back.”
Brunner said it was important for her to have surgery with a doctor and staff that she trusted. “I trust Dr. Pearsall very much,” she said. “He performed most of the surgeries for my teammates during my career at USA, including one for my best friend and my twin sister, Patriece.”
Being a basketball star is just one role this determined woman plays in her life. She is also a single mother to 2-year-old Brianna Butler.
Brunner said the most difficult part of being a mom and a basketball star all at once was time management. “I had to make sure that Brianna was up, dressed and at daycare before I went to class, and I had to make sure someone was there to pick her up at the end of the day when I was still at practice or at a game,” Brunner said. “I have a couple of special friends who helped tremendously.”
Brunner never let her life obstacles get in the way of reaching her goals. “What I want every young woman to know is that even if you find yourself in a predicament such as mine, your life and your goals do not have to end,” Brunner said. “God has blessed me with wonderful family and friends who helped me, and many doors opened when I thought everything would close.”
“Make good decisions in life, and stay self-motivated and determined to be the best possible person you can be,” she said. “With that frame of mind, the possibilities are endless.”
Posted by Med School Watercooler at 3:34 PM No comments: 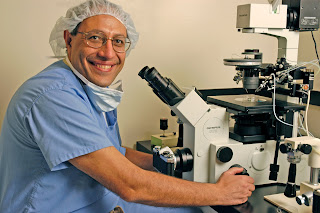 Dr. Botros Rizk, professor of obstetrics and gynecology and director of reproductive endocrinology at the University of South Alabama College Of Medicine, has been selected as the Deputy Editor for Egyptian Fertility and Sterility Society Journal, the leading international medical journal in the field of reproductive medicine.

Egyptian Fertility and Sterility Society Journal is an international journal for obstetricians, gynecologists, reproductive endocrinologists, urologists, basic scientists and others who treat and investigate problems of infertility and human reproductive disorders. The journal encourages and supports meaningful basic and clinical research and facilitates and promotes excellence in professional education, especially in the field of reproductive medicine.

Dr. Rizk specializes in infertility and osteoporosis, and his special interests include reproductive endocrinology, in vitro fertilization and laparoscopic surgery. He succeeds Dr. Richard J. Paulson of Los Angeles as Deputy Editor for the journal.

Recently, Dr. Rizk also published a comprehensive medical textbook, “Ultrasonography in Reproductive Medicine and Infertility.” The book encompasses the complete role of ultrasonography in the evaluation of infertility and assisted reproduction.

Dr. Rizk graduated from Cairo University in Cairo, Egypt. He completed his obstetrics and gynecology residency at the USA. He completed his fellowship training at the prestigious Reproductive Endocrinology Bourn Hall Clinic in Cambridge, England.
Posted by Med School Watercooler at 3:28 PM No comments: 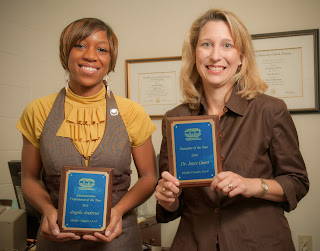 Two employees in the department of Education Technologies and Services at the USA College of Medicine were recently recognized for their outstanding service by the Mobile chapter of the International Association of Administrative Professionals.
Angela Andrews, secretary for the department, was named Administrative Professional of the Year. Dr. Joyce Guest, the instructional design specialist, was named Executive of the Year.

In June, Andrews will compete for the Alabama Division Administrative Professional of the Year Award in Birmingham, Ala. For more information, visit http://www.southalabama.edu/iaap.

IAAP’s mission is to enhance the success of career-minded administrative professionals by providing opportunities for growth through education, community building and leadership development.
Posted by Med School Watercooler at 1:30 PM No comments:

The USA COM Spring Faculty Assembly Meeting is scheduled for Wednesday, May 19, at 4 p.m. It will be held at the USA Medical Center in the 2nd floor conference center (Richards Room).

Nominations for the three at-large members for the Medical Exectutive Committee and new secretary for the faculty assembly are now open.

Nominations can be submitted to Dr. Todd B. Standley (tstandley@usouthal.edu or tbstandley@gmail.com), Dr. Tom Lincoln, or Dr. John Benjamin. The voting will be electronic.
Posted by Med School Watercooler at 10:20 AM No comments:

The next Distinguished Scientist Seminar will be presented by Dr. Philip Howe on April 29, 2010, at 4 p.m. in the Medical Sciences Building auditorium. His seminar is titled "Transforming growth factor beta (TGFbeta)-regulated epithelial-mesenchymal transition (EMT)."

Currently, Dr. Howe is professor of physiology and biophysics at the Case Western Reserve University and a staff member in the department of cancer biology at the Cleveland Clinic Lerner Research Institute in Cleveland, Ohio.

For more information on Dr. Howe’s research, visit http://www.lerner.ccf.org/cancerbio/howe. For additional information on the lecture, contact Natalie Kent at 461-1548.
Posted by Med School Watercooler at 9:14 AM No comments: