A team of scientists at the University of South Alabama College of Medicine has been awarded a $9,191,785 research grant from the National Institutes of Health (NIH) to examine the causes and consequences of pneumonia, a lung infection that is a major source of illness and death for children and adults over 65 years of age around the world.

The NIH grant, which is termed a program project grant or PPG, marks the largest competitive research grant award in the history of USA, second to only a $14.5 million grant awarded to the USA College of Medicine in 2010 from NIH to fund construction of a state-of-the-art specialized infectious disease research laboratory.

“The renewal of this grant by Dr. Stevens and his colleagues is particularly impressive in light of the highly competitive nature of research funding from the National Institutes of Health during tough economic times,” said Dr. Samuel J. Strada, dean of the USA College of Medicine.

According to Dr. Troy Stevens, the lead scientist on the PPG grant, this funding will allow investigators to focus on translational models and moving the knowledge gained from USA’s research labs toward the clinical care environment.  The grant will also support training experiences for both student physicians and researchers at the USA College of Medicine.

“In previous PPG grant awards, our projects examined broad aspects of lung injury on a basic science level,” said Dr. Stevens, who serves as professor of pharmacology and also directs the Center for Lung Biology at USA.  “During this funding cycle, we will focus upon a preclinical model of pneumonia that progresses to sepsis and acute respiratory distress syndrome, applying what was learned in previous research to develop a deeper understanding of lung injury that will enable development of improved treatments for patients.”

Pointing to the success demonstrated by work supported in this PPG, one of the research projects associated with an earlier funding cycle recently led to the formation of a start-up company, Exscien.  This company will work to develop first-in-kind treatments for infection and trauma-related lung injury.  This is among the first biotech companies to be launched along the Gulf Coast region.

Pneumonia is a form of acute respiratory infection.  It is a life-threatening illness among children and adults who are 65 or older.  It is the leading cause of death in children worldwide – leading to an estimated 1.4 million deaths in children under the age of five years.   In Alabama, pneumonia causes 830 deaths each year.

“Our tremendous depth in lung biology expertise at USA is complimented by the extensive clinical capability that directly relate to this research – services such as the Level I Trauma Center, the Burn Center, the adult and pediatric intensive care units as well as the neonatal intensive care unit,” said Dr. Stevens.  “Our goal is to build on these programs and help them enhance both their educational training experiences and patient outcomes.”

Life-threatening consquences of infection and trauma are acute lung injury and multiple organ system failure.  There are currently no drugs available to prevent or reverse these disorders.  Exscien, the start-up company linked to the PPG, is a collaboration between USA College of Medicine investigators and local business leaders.   The company – founded on the discovery of new drugs to repair DNA and prevent and reverse acute lung injury - has plans to rapidly extend its research in model systems to human patients.

The positive impact of medical research funding goes beyond the expansion of knowledge and the improvement of care.  In addition to the Exscien endeavor, research funding has a direct and indirect positive economic impact on our community. Including this grant award, NIH has invested approximately $27 million in this PPG during the course of 15 years.  Using the established standard research multiplier impact of 2.3, this translates to approximately $70 million in economic stimulus directly related to the 3 funding award cycles of this PPG grant at USA. 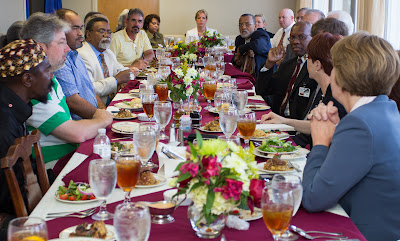 Business leaders and residents from the Crichton community, as well as city and county officials, met at the University of South Alabama Medical Center on June 1, 2012, to initiate a community effort toward beautification of the neighborhood, particularly Mobile Street.

The initiative was organized by Mobile City Councilman Fred Richardson and the USA Health System.

During the luncheon, attendees discussed potential landscaping plans and efforts to maintain the medians along Mobile Street.

"Everyone is excited about the possibilities," said Elmer Sellers, assistant hospital administrator at the USA Medical Center. "The next step is to formalize plans and work together to improve the neighborhood of which we are a part of."

"It was an enthusiastic meeting that generated lots of great ideas," added Becky Tate, chief executive officer of the USA Health System. "We look forward to continuing discussions as we formalize action plans."

In addition to the luncheon, the event also provided an opportunity for guests to tour areas of the USA Medical Center.

Posted by Med School Watercooler at 3:13 PM No comments: 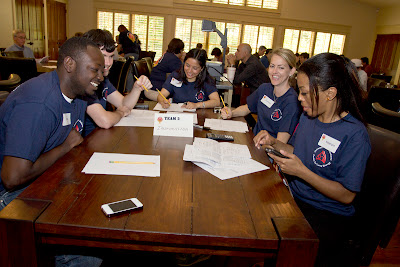 The University of South Alabama Center for Lung Biology held its first Lung Bowl competition on June 1, 2012, at the USA Faculty Club.

The Lung Bowl is a biology game based on a jeopardy model, where teams come together to compete against one another for high scores. The teams include graduate students, doctoral program students, pulmonary and critical care fellows, and post-doctoral fellows in the USA Center for Lung Biology.

According to Dr. Troy Stevens, professor of pharmacology and director of the USA Center for Lung Biology, the Lung Bowl is a training exercise that builds the pulmonary community.

"This event gives our students opportunities to interact with others from various disciplines, all of whom are interested in central issues related to lung physiology and lung pathology," he said. "This is a new attempt for us to bring our education programs to an even higher level to compete at a national level for training."

"This is something that we’re emphasizing on both the clinical side and the basic science side," Dr. Stevens added. "It’s a fun competition among peers." 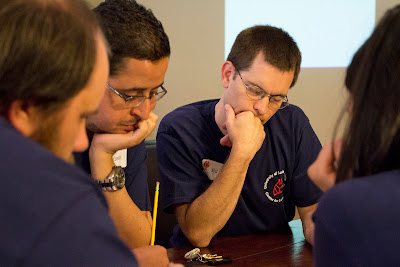 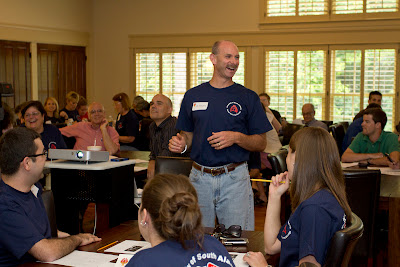 Posted by Med School Watercooler at 3:13 PM No comments:

Dr. Cooke, who serves as the William G. Irwin Endowed Chair and director of the Haile T. Debas Academy of Medical Educators at the University of California at San Francisco, has been active in medical education program development throughout her career.

An awardee of Health Resources and Services Administration funding for the “Interdisciplinary Generalist Curriculum,” she served as the founding director of "Foundations of Patient Care,” an innovative six-quarter, preceptorship-based course for first- and second-year medical students.

Dr. Cooke has taught in the Parnassus Integrated Student Clinical Experiences (PISCES) since its inception and advises a research group that is studying longitudinal integrated clinical experiences at three sites nationally to replace the conventional third year of medical school.

A distinguished teacher, Dr. Cooke has twice received the Kaiser Family Foundation Teaching Award as well as a UCSF Academic Senate Award for Distinction in Teaching. In 2006, she was awarded the AOA/Robert J. Glaser Distinguished Teacher Award by the Association of American Medical Colleges (AAMC), and in 2010 she received the Career Achievement Award in Education from the Society for General Internal Medicine.

As a Senior Scholar of the Carnegie Foundation for the Advancement of Teaching, Dr. Cooke co-directed a national study of medical education. This work culminated in the text, "Educating Physicians: A Call for Reform of Medical School and Residency." The book was co-authored with Drs. David Irby and Bridget O’Brien and was published in June 2010 by Jossey-Bass/Wiley.

Dr. Cooke has advised the AMA, the American College of Physicians, and the AAMC on clinical care and ethical and policy issues in the HIV epidemic, and was a founding co-director of the AIDS Task Force of the Society for General Internal Medicine. She was a Department of Health and Human Services Primary Care Health Policy Fellow in 2004 and has been repeatedly selected by her peers as one of “America’s Best Doctors.” Governor of the Northern California chapter of the American College of Physicians from 2004 to 2009, she completed a term as chair of the Board of Governors in April 2010 and currently serves as a Regent of the College.

Dr. Cooke earned her bachelor of science and medical degrees at Stanford University. She completed her internal medicine residency at the University of California at San Francisco and served as chief resident and a Kaiser Family Foundation Fellow.

For more information on the lectures, contact Dr. Susan LeDoux at (251) 460-6762 or sledoux@usouthal.edu .
Posted by Med School Watercooler at 3:12 PM No comments: