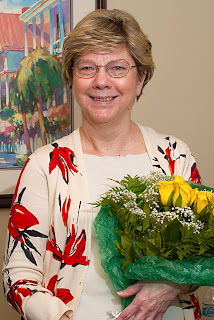 Family and colleagues have established a memorial fund at the University of South Alabama to honor Wynona "Nona" Odom, who retired from USA as director of patient business services in 2010.

Odom served at the University for more than 30 years. 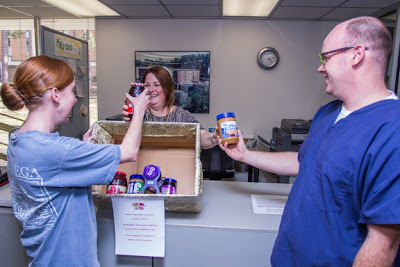 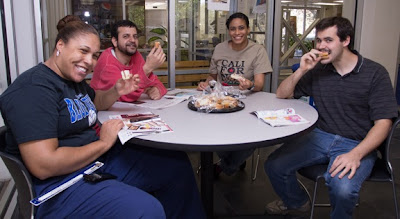 The University of South Alabama Biomedical Library served peanut butter and jelly sandwiches throughout the day on April 2 as part of PB&J Day, a nationwide event highlighting the low environmental impact of plant-based meals.

Jars of peanut butter and jelly were also collected for donation to the Bay Area Food Bank. Donations can still be made through April 5 and should be dropped off at the Biomedical Library on USA's main campus.

In addition to PB&J Day, the USA Biomedical Library is participating in a number of unusual holidays this year, called "Whacky Days." Earlier this year they celebrated National Homemade Soup Day, Pancake Day, Waffle Day, and Pi Day. The next Whacky Day they will celebrate is Grilled Cheese Day, followed by Talk Like Shakespeare Day.

To learn more about PB&J Day, visit www.pbjcampaign.org.
Posted by Med School Watercooler at 10:44 AM No comments: 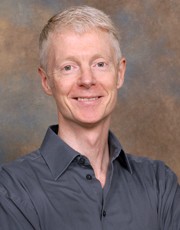 Aspergillus fumigatus is an environmental mold that propagates itself by the release into the air of high concentrations of spores, which are unavoidably inhaled. Patients who are immunosuppressed, such as cancer or transplant patients, are at increased risk for infection with these spores.

Dr. Askew earned his PhD from the University of British Columbia in 1986.

To learn more about Dr. Askew's research, click here or here.
Posted by Med School Watercooler at 10:34 AM No comments:

The University of South Alabama College of Medicine’s Charles M. Baugh 2013 Lecture will feature Sir Philip Cohen, a pioneer in the scientific field of protein phosphorylation and cellular signalling.

His lecture, titled “Novel Signalling Networks that Prevent the Development of Autoimmune and Inflammatory Diseases,” will take place April 9, 2013, at 4 p.m. in the Medical Sciences Building auditorium on USA’s main campus.

A Fellow of the Royal Society, Sir Philip is a Foreign Associate of the National Academy of Sciences and professor of enzymology, Medical Research Council Protein Phosphorylation Unit, University of Dundee, Scotland.

Cohen has contributed widely to the field of protein phosphorylation, a biological control mechanism that regulates most aspects of cell life. He discovered several enzymes that have subsequently been targeted to develop drugs for the treatment of cancer and rheumatoid arthritis and to prevent tissue rejection after organ transplantation. Currently, his laboratory is investigating how the innate immune system defends against infection by pathogens and how a deregulated immune system can cause chronic inflammatory diseases.

He earned BSc and PhD degrees from the University College, London and held a Science Research Council/NATO postdoctoral fellowship at the University of Washington in Seattle working in the laboratory of Nobel Laureate Ed Fischer before joining the University of Dundee in 1971. He was a Royal Society research professor from 1984-2010, director of the Medical Research Council Protein Phosphorylation Unit from 1990-2012, and director of the Scottish Institute for Cell Signaling from 2008-2012. In addition, he co-directs the Division of Signal Transduction Therapy, Europe’s largest collaboration between academia and the pharmaceutical industry. This group received a Queen’s Anniversary Award for Higher Education in 2006.

Cohen’s awards include the Swiss Louis Jeantet Prize for Medicine, the Prix Van Gysel of the Belgian Royal Academy of Medicine, the Pfizer Award for Innovative Science in Europe, the Bristol Myers Squibb Distinguished Achievement Award in Metabolic Research and the Rolf Luft Prize of the Karolinska Institute in Sweden. Knighted in 1998, he was elected Fellow of the Royal Society of Edinburgh and Fellow of the Royal Society of London in 1984, receiving their Royal Medals in 2005 and 2008 respectively. In addition, he was made a Foreign Associate of the U.S. National Academy of Sciences.

During his career, Cohen has published more than 500 research papers and given 275 invited lectures at scientific meetings in 34 countries. He has also played a significant role in developing the College of Life Sciences at the University of Dundee, which currently comprises 840 staff from 59 countries.

This year, Cohen received the Medical Research Council’s Millennium Medal, presented every two years to an outstanding scientist who has made a major contribution toward the MRC’s mission to improve human health through world-class medical research.

The lecture is held in memory of Dr. Charles M. Baugh, who served twice as dean of the USA College of Medicine and vice president for medical affairs. He began his career at USA in 1973 as a charter member of the medical school faculty and as professor and chair of biochemistry. In 1976, Dr. Baugh was named associate dean for basic medical sciences. In addition, Dr. Baugh was involved in the creation of the USA Health Services Foundation, the South Alabama Medical Sciences Foundation, PrimeHealth, and in the development of USA's biomedical library which bears his name.

Past Baugh Lecture Speakers Have Been: 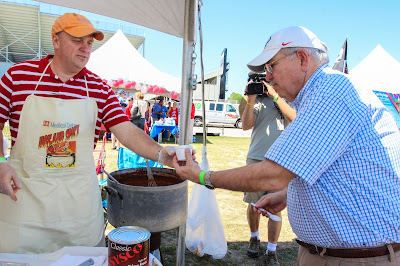 The fifth annual Gumbo Chili Showdown will be held this Saturday, April 6, from 11 a.m. to 2 p.m. preceding the University of South Alabama Jaguars Spring Game at Ladd-Peebles Stadium.

The event supports a scholarship at the USA College of Medicine created in memory of Regan Robinson, a medical student at USA who was diagnosed with advanced colon cancer in 2003 at the age of 23. The scholarship provides assistance to a rising senior medical student who embodies Regan’s spirit and character.

The event will feature both gumbo and chili from competing teams.

Tickets are $10 and are available for presale through Karen Braswell in the Mastin Building Room 202 or Rhonda Smith in the Medical Sciences Building on campus. Tickets can also be purchased at the gate or can be purchased online by clicking here.

The Gumbo Chili Showdown was created in 2008 by USA medical students and continues to be a project organized by students at the USA College of Medicine.

**This Thursday, April 4th, from 4-10 p.m., Five Guys Burgers and Fries on Airport and University will be hosting a fundraiser for the Gumbo Chili Showdown. A percentage of all sales from this time period will be donated to the Regan Robinson Young Scholarship Fund. Help support a great cause! If you have any questions, e-mail gumbochili@gmail.com.
Posted by Med School Watercooler at 3:06 PM No comments:

April Med School Café - 'The Ups and Downs of GERD' 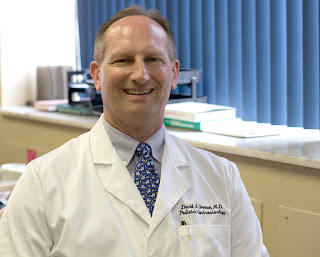 The April Med School Café lecture will feature Dr. David Gremse, professor and chair of pediatrics at the University of South Alabama College of Medicine.

His lecture, titled “The Ups and Downs of GERD,” will take place April 16, 2013, at the USA Faculty Club on USA’s main campus. Lunch will be served at 11:30 a.m., and the presentation begins at noon.

Dr. Gremse will lecture on gastroesophageal reflux disease (GERD), a chronic digestive disease that occurs when stomach acid flows back into the esophagus. During the talk he will include information on the symptoms and diagnosis of GERD, as well as available treatment options.

Dr. Gremse earned his medical degree from the USA College of Medicine in 1983. He completed his internship and residency in pediatrics at the USA Medical Center and his fellowship in pediatric gastroenterology and nutrition at Children’s Hospital Medical Center in Cincinnati. In addition, he was a research fellow in the division of pediatric gastroenterology and nutrition at Cincinnati Children’s Hospital Research Foundation.

The Med School Café lecture and lunch are provided free of charge, but reservations are required. For more information or to make reservations, call Kim Partridge at (251) 460-7770 or e-mail kepartridge@usouthal.edu.

Click here to view past Med School Café lectures.
Posted by Med School Watercooler at 11:46 AM No comments: