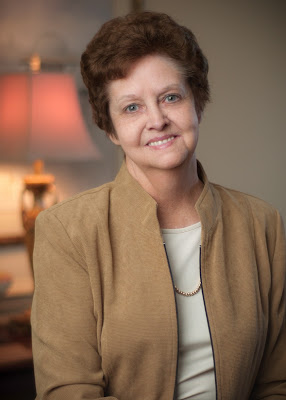 Pat Green, residency program specialist at the University of South Alabama College of Medicine, will be retiring Jan. 31, 2011, after more than 30 years of service to the university.

Dr. Thomas Montgomery, professor of internal medicine and program director of the internal medicine residency program, said Green’s devotion to USA is unfailing. “She has the personality and the willingness to help people at any time, and everything she does, she does extremely well,” Dr. Montgomery said. “She has special talents and a high level of expertise, and we sure are going to miss her.”

Green came to USA in 1971 as a purchasing clerk at the USA Medical Center. She also served as a medical education coordinator and a secretary to the hospital administrator before taking a leave of absence in 1978 to have her child.

In 1984, Green returned to USA as the residency program specialist. “I always told myself I was not going to come back, but I did,” Green said. “I’m very glad that I did.”

As the residency program specialist in the internal medicine department, Green said she is part of an administrative team, working with the program director and residents on a daily basis. She is responsible for collecting and maintaining resident data to ensure that educational and accreditation requirements are met.

Green said it is her job to support the residents’ education, as well as help them fulfill their role as doctors. “She has made their residencies easier not so much by addressing problems, but rather helping to avoid problems and worries,” Dr. Montgomery said. “She has had such a positive impact on so many people over the years. Former residents continue to show appreciation for what she did for them here.”

“One of the main highlights of my job has been working with the residents and growing with them,” she added. “It’s important to maintain relationships, and I enjoy staying in contact with them after they leave USA.”

Green said her time at USA has been more than rewarding, and it is the people here that she will miss the most. She said she is looking forward to traveling with her family and enjoying some leisure time after her retirement.

“I’ve grown and worked a lot at this job, and it has been very satisfying,” Green said. “Actually, it has been more than a job. For me, it’s been my career.”
Posted by Med School Watercooler at 2:41 PM No comments: 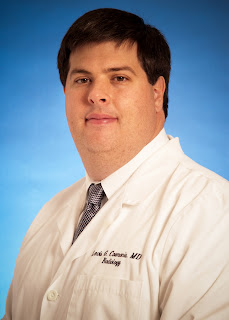 Dr. Coumanis earned his undergraduate degree in microbiology from Auburn University in Auburn, Ala. He earned his medical degree from USA, where he also completed radiology residency training.

Following his residency, Dr. Coumanis completed a radiology fellowship in the department of vascular and interventional radiology at Brigham and Women’s Hospital in Boston. 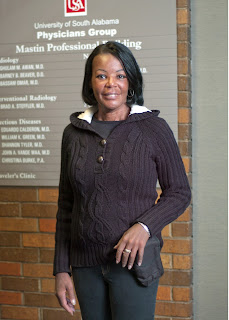 Denise Payne had always taken care of herself – eating organic foods and exercising regularly. She had no idea that at this stage of her life she would be battling a life-threatening disorder caused by her body fighting against itself.

Pulmonary Hypertension (PH) is a rare blood disorder of the lung in which the pressure in the pulmonary artery -- the blood vessel that leads from the heart to the lungs -- rises above normal levels and may become life threatening. It is a disease that affects people of all ages and ethnic backgrounds. It can occur independently or in association with other diseases such as heart and lung disease, as well as connective tissue diseases.

Payne was diagnosed with PH in August 2009, nearly a year after a misdiagnosis of asthma. Payne, who is currently a civil engineer at Thyssenkrupp, said she was working on a special project in Virginia. On her daily one-mile walk to work, she became short of breath after breathing in cold air. “It just kept getting worse and worse,” she said. “It was right after that when I was diagnosed with asthma.”

After moving to Mobile to begin work at the new plant, Payne’s asthma medications were still not working. After a few months, she was sent to a private physician in Mobile, and was correctly diagnosed with PH. She ultimately started on treatment, but her PH still seemed to be getting worse.

It was unclear what had caused Payne’s PH. “Finally, a rheumatologist said I had scleroderma – a connective tissue disease that can cause PH,” Payne said. “My body was basically fighting with itself.”

Payne was referred to Dr. Karen A. Fagan, medical director of the University of South Alabama Pulmonary Hypertension Center. It was then that her treatment program was kicked up a notch. A Groshong catheter – a type of tunneled intravenous catheter – was inserted under her clavicle on July 28, 2010. Later that day, she began treatment with an IV medication that is continuously infused – 24 hours a day for the rest of her life or until better treatments, including lung transplants, are available.

“If left untreated, the severest types of PH have a poor prognosis with severely shortened life expectancy and decreased ability to perform the functions of everyday life,” Dr. Fagan said. “We know that our current treatments are improving and extending lives, but unfortunately PH remains a progressive disease. However, significant advances have been made in both understanding the cause of the disease and in developing new treatments.”

The University of South Alabama Pulmonary Hypertension Center provides care for patients with PH and educates patients, families, and the community about the disease. Its mission is to search for better treatments and ultimately a cure for PH through research at the USA Center for Lung Biology and clinical trials through the USA Pulmonary Hypertension Center. “USA has played a very significant role in research in this disease,” Dr. Fagan said. “Major contributions from members of the faculty at USA over the past 20 years have led the way for development of almost all of the available treatments for PH that currently exist.”

Currently, Payne is on a regular exercise program and takes five different medications daily. She was visiting Dr. Fagan once a month for follow-up. “Now, I visit her about once a quarter,” Payne said. “She is absolutely amazing, and I learned a lot about this disease through her. Her control and knowledge about research is astounding.”

“There are so many people that are misdiagnosed, and it is important to promote awareness of PH,” Payne said. “Education is power. The more information we get out there, the closer we can get to beating this.”

Payne was upset when she found out her PH diagnosis because she had always taken care of herself. “I was never scared, though, because I relied on my faith,” she said. “That’s what got me through this.”

“The more problems I had, the more motivated I became,” Payne said. “I won’t let this beat me. I am fighting the disease, and I am winning.”
Posted by Med School Watercooler at 2:39 PM No comments:

The next Distinguished Scientist Seminar at the University of South Alabama College of Medicine will be presented by Dr. Kathy Griendling, professor of medicine in the cardiology division at Emory University in Atlanta.

Dr. Griending’s research is focused on the role of NADPH oxidases (Nox) in vascular biology and disease. Her laboratory uses molecular techniques to study the subunit structure of Nox enzymes and their downstream targets. Dr. Griendling has a particular interest in how reactive oxygen species (ROS) derived from these enzymes regulate the signaling pathways leading to smooth muscle proliferation, migration and differentiation.

In 2005, Dr. Griendling became the vice chair for faculty development in the department of medicine at Emory University. She has trained 28 post-doctoral fellows, many of whom have gone on to have successful academic careers. She is a fellow of the American Heart Association and a member of the graduate faculty in molecular and systems pharmacology.

Dr. Griendling received her Ph.D. in cardiovascular physiology from Johns Hopkins University in 1982 and completed postdoctoral training at the University of Pennsylvania and Harvard University.

She serves as an associate editor for Circulation Research and The American Journal of Physiology-Cell Physiology. In addition, she is one of the executive editors of Antioxidants and Redox Signaling.

For additional information on the lecture, contact Natalie Kent at (251) 461-1548.
Posted by Med School Watercooler at 2:39 PM No comments: