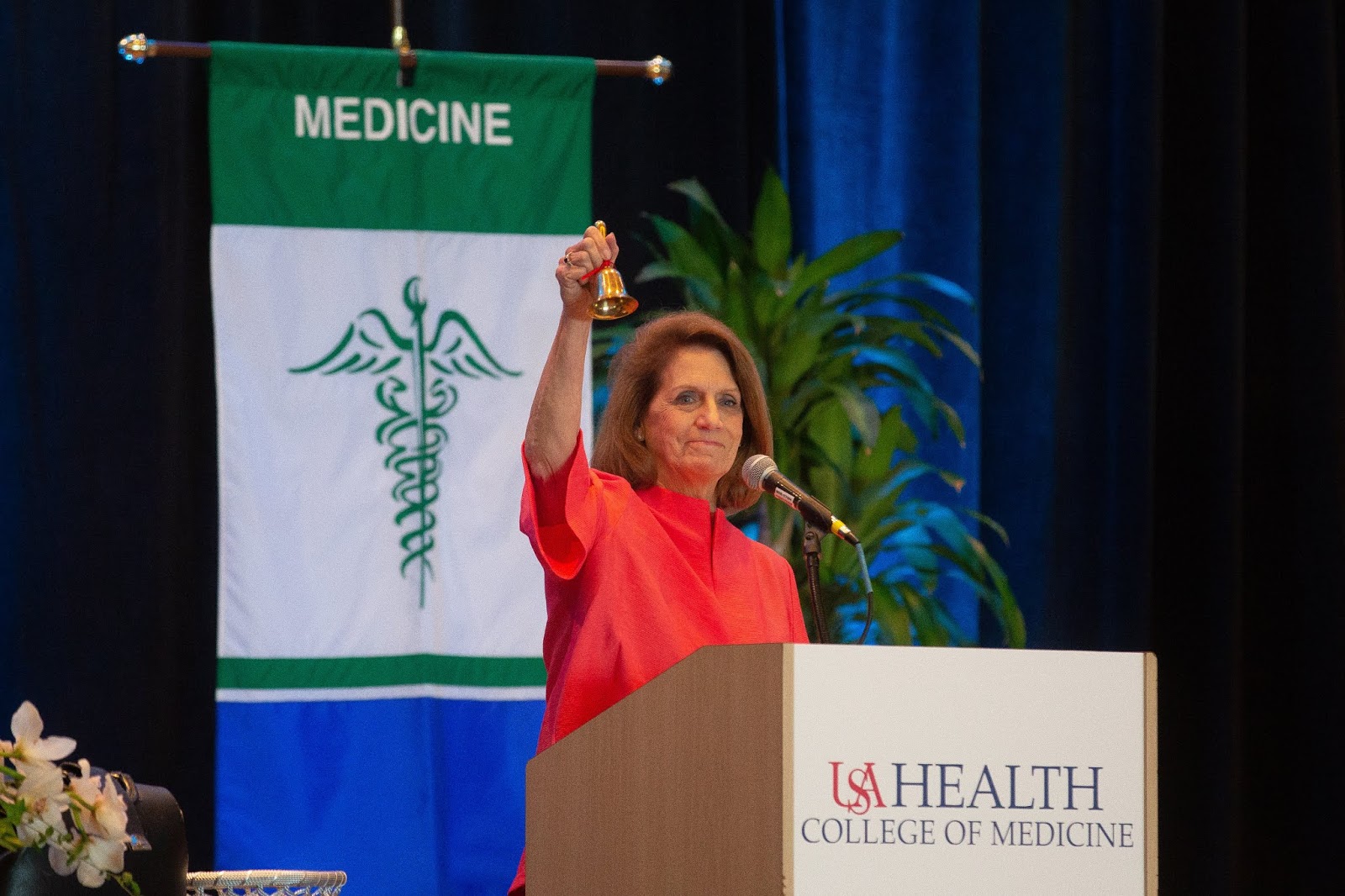 A passionate educator, avid researcher and influential leader, Dr. Susan LeDoux has contributed in multiple ways to the advancement of the University of South Alabama College of Medicine on both national and international levels.

Most recently serving as associate dean of medical education and student affairs, Dr. LeDoux takes great pride in playing a key role in the lives of medical students as they become competent physicians and lifelong learners.

As she reflects upon her years spent at the USA College of Medicine, Dr. LeDoux said two words come to mind: “amazing opportunities.”

As a researcher, she played a critical role in the discovery of mitochondrial DNA repair. In collaboration, she and Dr. Glenn Wilson were the first to discover that base excision DNA repair occurs in mitochondrial DNA. Their research has served as the basis for additional scientific discoveries as well as the development of novel treatments for patients.

“This research provided opportunities for me to present our findings at many national and international venues,” she said. “It also formed the foundation for much of the ongoing research here at the USA College of Medicine. Knowing that you played a key role in a scientific discovery that has resulted in textbooks with entire chapters devoted to mitochondrial DNA repair is extremely rewarding.”

As a scientist, Dr. LeDoux said she had the opportunity to interact with many intelligent and wonderful individuals both at scientific meetings and through the large number of review committees on which she served. 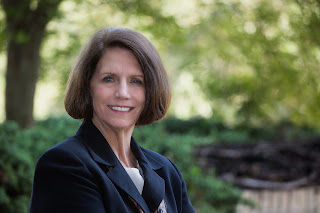 As part of USA’s 50th anniversary celebration, she was named one of 50 Outstanding Faculty Members representing the University’s most influential educators. She has been honored with the Scarlet Sash Award each year since its inception. This award, given each year by USA senior medical students, honors faculty members who have had the most meaningful impact on their educational experiences at the USA College of Medicine.

In 2003, she was appointed assistant dean for curriculum. In 2011, she was promoted to associate dean for medical education and student affairs. As professor and chair of the division of medical education, she successfully led the initiative to reorganize the medical school’s curriculum to an integrated, organ‐system‐based approach.

After earning her doctorate in basic medical sciences from the University of South Alabama, Dr. LeDoux completed her post‐doctoral training in anatomy at the USA College of Medicine. Later, she joined the faculty as an assistant professor of cell biology and neurosciences. Throughout her career, she has excelled as a medical educator, scientist and administrator.

Dr. LeDoux is a member of Alpha Omega Alpha Medical Honor Society. In addition to her work at the USA College of Medicine, she has served on numerous review panels for National Institutes of Health. She has also served as a member of the Step 1 Item Writing Committee for the National Board of Medical Examiners.

Dr. LeDoux has written 65 scientific publications, and as a visiting scientist has made presentations nationally and internationally in places such as Sicily, Norway, Germany, Denmark, Chile, and the Netherlands.

In the next months – after over 30 years of dedicated service – she will officially retire from USA, and will continue to teach anatomy on a part-time basis. 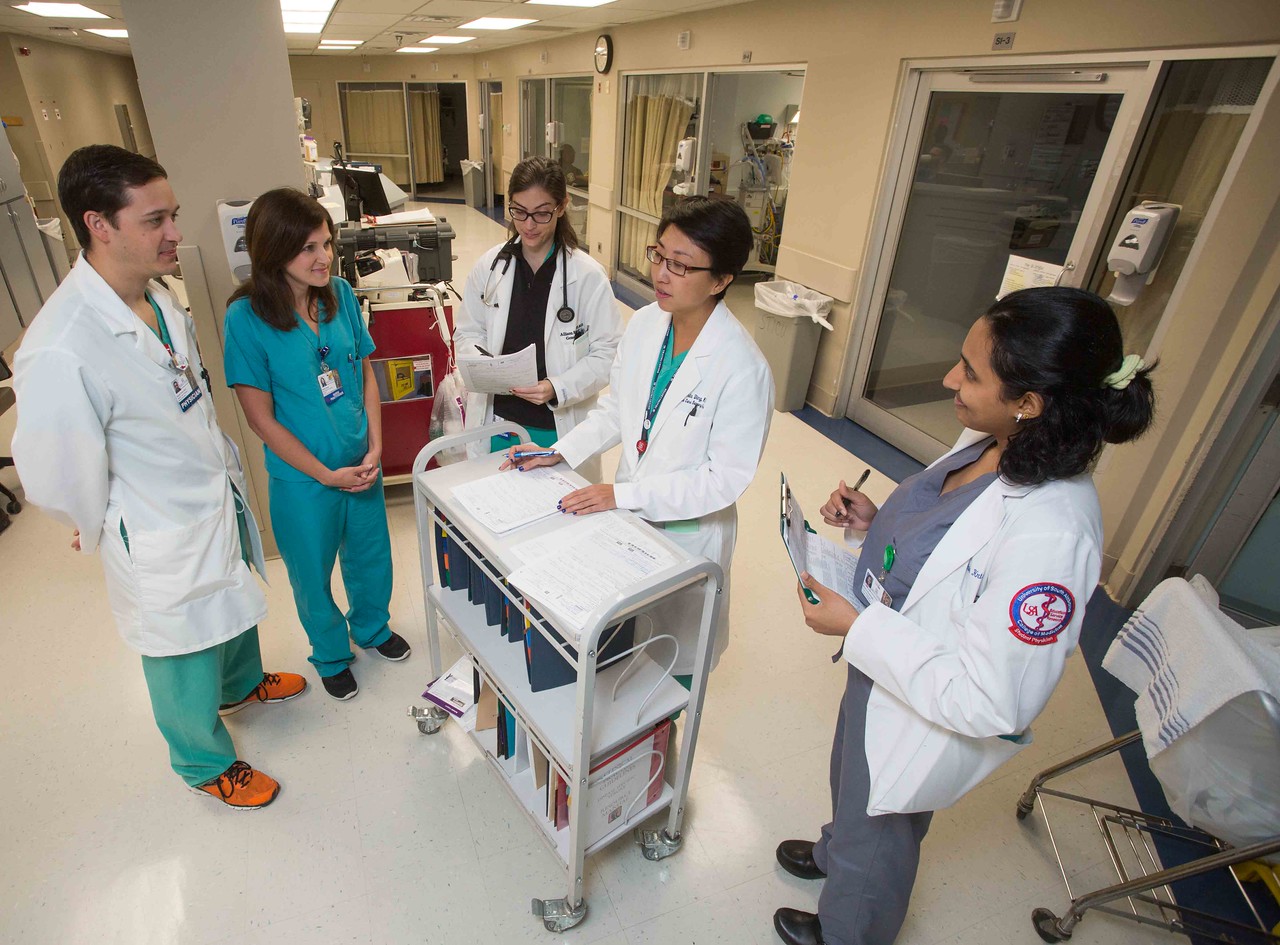 Healthcare is an ever-evolving industry. With new technologies being developed and regulations being constantly revised, leaders in the field must stay on top of the changes or be left behind.

To meet these challenges, the University of South Alabama's Mitchell College of Business and the College of Medicine have collaborated to provide a new learning opportunity for healthcare professionals. Starting in fall 2019, the Master of Business Administration program will offer a concentration in healthcare leadership.

According to Dr. Bob Wood, dean of the Mitchell College of Business, the program is designed to benefit professionals across the healthcare industry - those working in clinics and hospitals, private practice, public health, research scientists, and those currently in health care management positions. The curriculum emphasizes experiential learning with practical application.

"Individuals completing the courses will be better prepared for the increasingly complex business environment and better positioned for challenges that they will face in more advanced managerial positions," Dr. Wood said.

The MBA is a flexible 30-credit-hour program, and the healthcare leadership concentration makes up nine of those credit hours in the form of three elective courses. Electives include topics such as U.S. Healthcare in the 21st Century, Healthcare Strategy, Revenue Cycle Management, and Leadership Development and Team Building.

"In healthcare, we have to adapt," said Dr. John Marymont, vice president for medical affairs and dean of the College of Medicine, who earned an MBA in addition to his medical degree. "It's important for healthcare leaders to have a foundation in business principles and the acumen to make well informed decisions."

Dr. Marymont added, "I encourage our healthcare professionals, faculty, administrators and staff to take advantage of this new program to build skills sets that can be applied to their work within the College of Medicine and USA Health."

To support this faculty development effort, each year the College of Medicine will make available $10,000 tax-free educational loans. These loans are intended to provide faculty with sufficient funds, such that along with the university tuition benefit, they can complete the program at essentially no cost. Learn more about the educational loans.

The deadline to apply for the Master of Business Administration program is July 15. For more information on the healthcare leadership concentration, visit https://www.southalabama.edu/colleges/mcob/mba/healthcare/.
Posted by Med School Watercooler at 12:09 PM No comments: 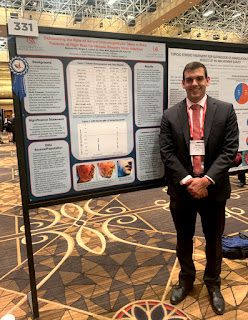 Phillip Brennan, a fourth-year student at the University of South Alabama College of Medicine, recently presented at the American Burn Association meeting in Las Vegas.

His poster, “Delineating the Role of Serum Immunoglobin Titer in Burn Patients at High Risk for Herpes Simplex Virus Infection,” won best in category for "Wounds - Clinical I." There were a total of 500 posters with 12 to 15 posters in each category.

“Patients who suffer facial burns or burns >/= 20 percent total body surface area are at high risk for developing HSV infections during their hospitalization,” said Brennan. “Since an active HSV infection can take one to three weeks for symptoms to manifest, we set out to see if HSV screening titers drawn at admission may help identify those patients who go on to develop active infection before symptoms begin. We looked at high-risk patients over the last few years and found that patients who have elevated HSV IgM serum titers on admission were significantly more likely to develop active HSV infection. In fact, anyone who tested seropositive for IgM on admission went on to develop an active infection.”

Identifying patients with elevated IgM on admission allows the care team to see who is at the greatest risk for infection, Brennan explained, and allows them to intervene prophylactically using Acyclovir to minimize the incidence of an active HSV infection and reduce the severity of symptoms if an infection were still to occur.

He had previously worked on projects with Dr. Steven Kahn, assistant professor of surgery, which is what piqued his interest in this topic. “I enjoyed learning and doing research with the burn team and wanted to continue with another project," he said. "It originally started as a summer research project, and we were able to continue to add data and present it at additional conferences."

Brennan said presenting at the ABA national meeting was an exciting opportunity to share the team's work and learn about the research that is going on across the United States and beyond. "The ABA meeting allows burn providers to collaborate and share ideas regarding every aspect of burn care to better advance the recovery and outcomes of our patients, and having the chance to participate in such an effort is always a privilege," he said.

Brennan credits Dr. Kahn and the entire research team for the opportunity. “I happened to be the lucky one who got to present the project," he said. "It wouldn’t have been possible without the efforts and guidance of Dr. Kahn and everyone who participated on the project. That’s the thing I continue to learn the most about research - teamwork makes it all possible.”

Posted by Med School Watercooler at 3:17 PM No comments: 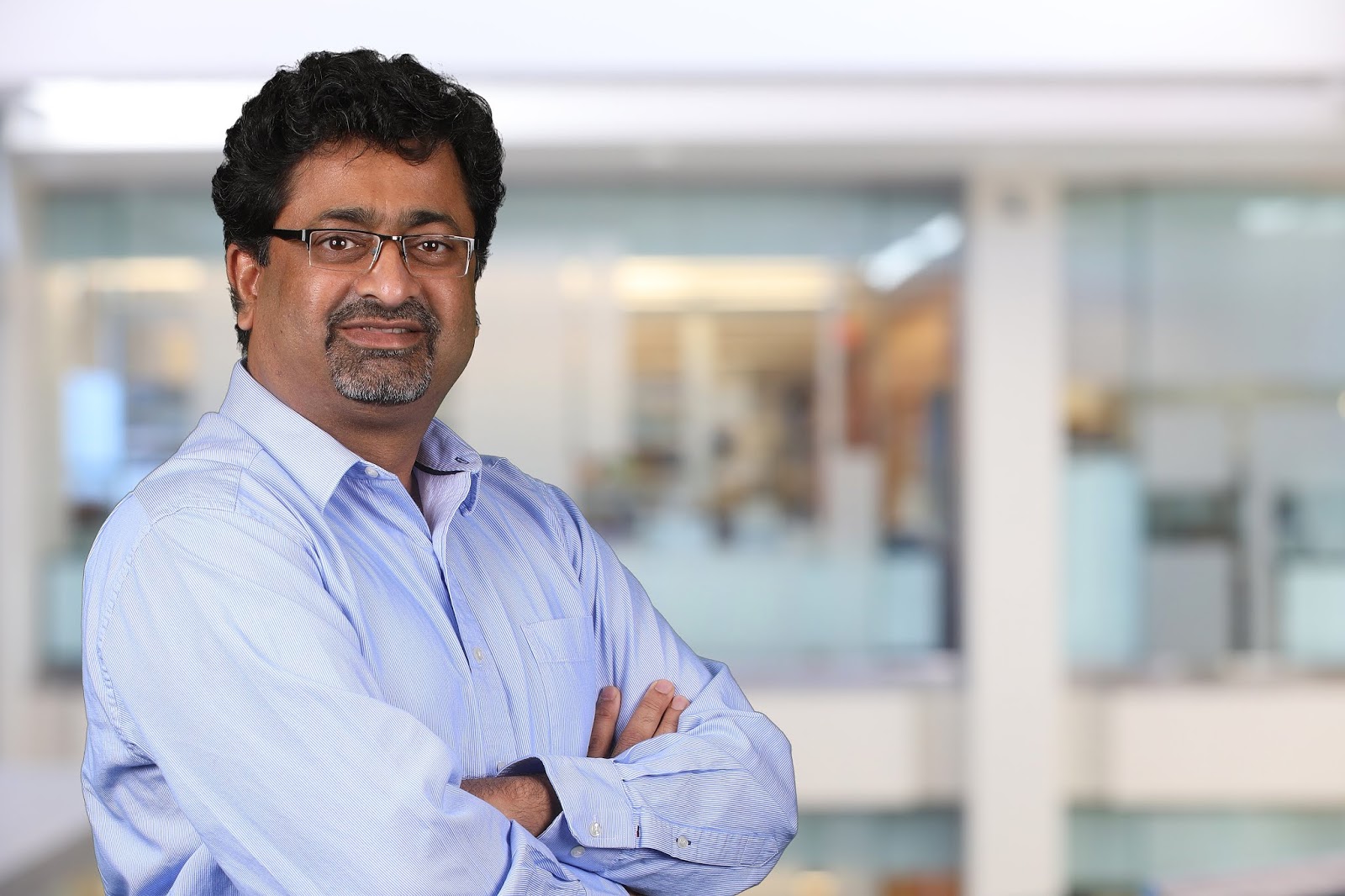 Cancer researcher Dr. Ajay Singh is one of 10 scientists to receive an Outstanding Achievement Award from the Society of American Asian Scientists in Cancer Research. The awards were presented at the annual meeting of the American Association of Cancer Research recently held in Atlanta.

Singh is a professor of oncologic sciences and head of the Health Disparities in Cancer Research Program at USA Health Mitchell Cancer Institute. He joined MCI in 2009.

“Dr. Singh is an outstanding scientist and a leader at MCI,” said MCI Interim Director Dr. Rodney P. Rocconi. “I’m so pleased that his research is being recognized at this level.”

Singh’s research focuses on the molecular mechanisms involved in cancer progression and chemoresistance, and the development of novel mechanism-based approaches for cancer therapy and prevention.

Singh received his Ph.D. in life science from Devi Ahilya University in India and completed postdoctoral training in cancer biology at the University of Nebraska Medical Center/Eppley Cancer Institute in Omaha, Nebraska. He has received numerous honors and awards and is a co-inventor on five issued U.S. patents of which three were granted for his discoveries relating to prostate and pancreatic cancer. He has been awarded research grants from all major federal funding agencies including the National Institutes of Health, the National Science Foundation and the U.S. Department of Defense.

Singh also is a recipient of the University of South Alabama 2016 Russell and Robin Lea National Alumni Excellence in Faculty Innovation Award and the 2016 Mayer Mitchell Award for Excellence in Cancer Research.

The Society of American Asian Scientists in Cancer Research is a nonprofit organization of more than 5,000 scientists from Asia who are working in the U.S. and Canada in the field of cancer research.

Posted by Med School Watercooler at 9:48 AM No comments:

Terry to discuss kidney stones at May Med School Café 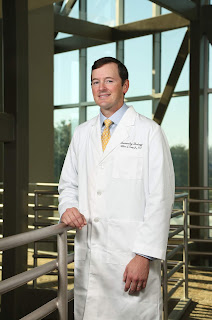 The May Med School Café will feature Dr. William Terry, a urologist with USA Health. He will discuss prevention and treatment of kidney stones.

The lecture will be held Friday, May 3, at the USA Faculty Club. Lunch will be served at 11:30 a.m., and the presentation will begin at noon.

Dr. Terry earned his medical degree from the University of South Alabama College of Medicine in 2008 and completed an internship in general surgery at the University of Alabama at Birmingham. He then completed his residency training in urology at UAB.

The Med School Café lecture and lunch are provided free of charge, but reservations are required. For more information or to make reservations, contact Kim Partridge at (251) 460-7770 or kepartridge@health.southalabama.edu.

Med School Café is a free community lecture series sponsored by the USA Health Physicians Group. Each month, faculty from the USA College of Medicine share their expertise on a specific medical condition, providing insight on the latest treatment available.

The USA Faculty Club is located at 6348 Fincher Road on the University of South Alabama's main campus.
Posted by Med School Watercooler at 9:22 AM No comments: