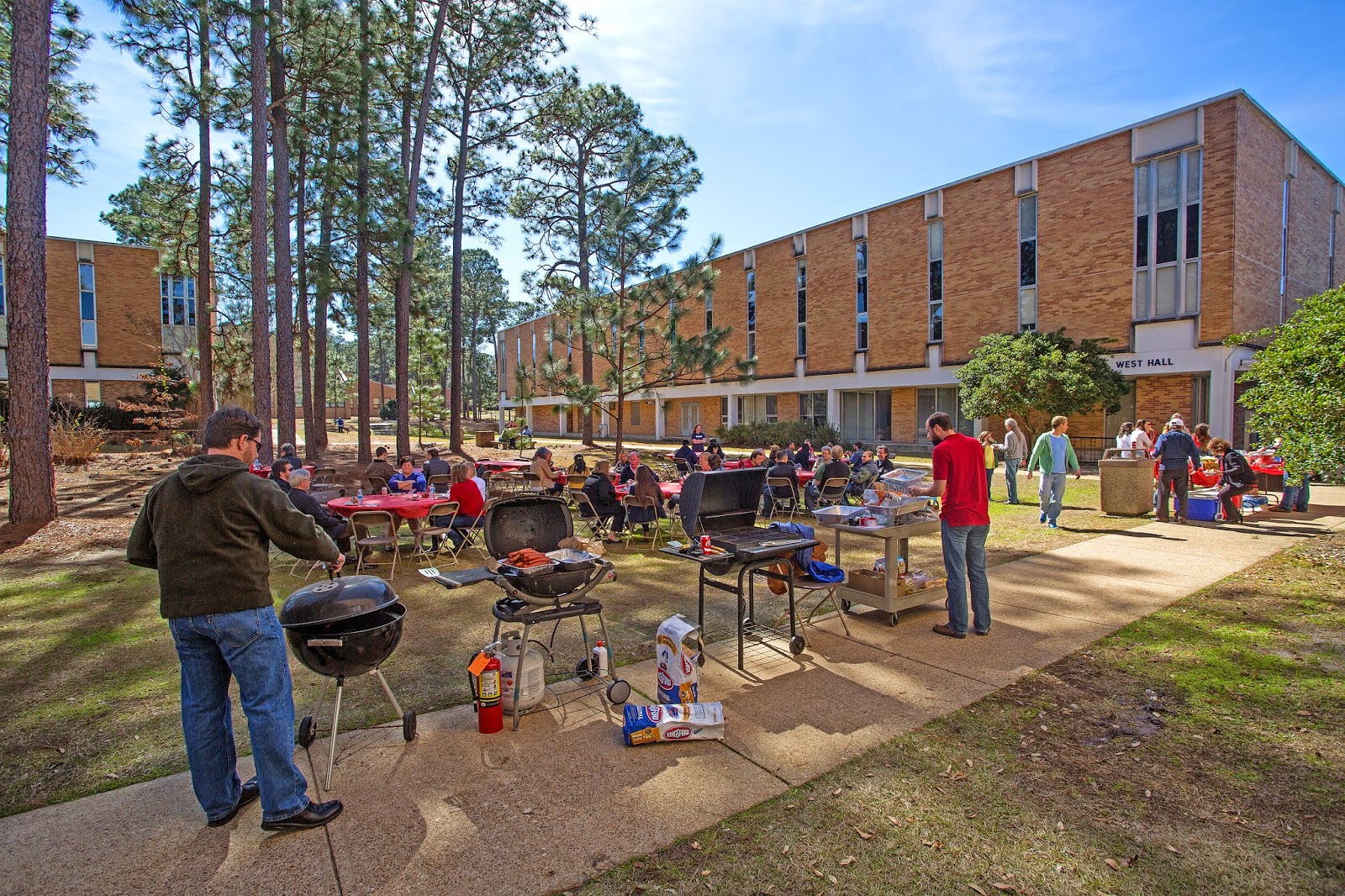 The University of South Alabama College of Medicine held its Charlie Baugh Dawg Day on Feb. 6, 2015. Students and faculty gathered for the annual celebration, which is held in memory of Dr. Charles M. Baugh, who served as dean at the USA College of Medicine on two separate occasions.

Dr. Charles M. Baugh served twice as dean of the USA College of Medicine and vice president for medical affairs. He began his career at USA in 1973 as a charter member of the medical school faculty and as professor and chair of biochemistry. In 1976, Dr. Baugh was named associate dean for basic medical sciences. In addition, Dr. Baugh was involved in the creation of the USA Health Services Foundation, the South Alabama Medical Sciences Foundation, PrimeHealth, and in the development of USA's biomedical library which bears his name.

Click here to view more photos from the event.
Posted by Med School Watercooler at 3:16 PM No comments:

The event will be held Feb. 25, 2015, at the USA Medical Sciences Building first floor auditorium from 12 p.m. to 1 p.m., as part of the Medical Alumni Speaker Series.  Dr. Adkison’s lecture is titled “Adventures in Medicine: Practicing in China.”

Dr. Adkison, a 1984 graduate of the USA College of Medicine and decorated Navy veteran, served as chair of the department of orthopedics at the National Naval Medical Center in Washington, D.C. Dr. Adkison also served as an attending orthopedic surgeon for the White House Medical Unit and U.S. Capital Physician’s Office.  His patients have included former President Bill Clinton, members of Congress, members of the Cabinet, Supreme Court and foreign dignitaries. Dr. Adkison completed his residency at the National Naval Medical Center and specializes in sports medicine and surgery of the knee and shoulder.

In addition to his impressive military background and experience providing medical care to top U.S. leaders, Dr. Adkison co-founded an orthopedic practice in Shanghai, China, as part of the American Medical Center.

The majority of medical students go through the National Resident Matching Program (NRMP) to find out where they will be doing their residency training following graduation, but students who wish to match in the military participate in a specialty match program that takes place months before Match Day in late March.

Timothy Parker, from Moundville, Ala., will continue his family tradition of serving in the military. Parker’s father was a former Marine Corps infantry officer, his brother is an active duty Marine and all of his uncles and grandfathers served in the military. “As a child, we were taught to serve our country, so being able to fulfill that duty by serving men and women who have sacrificed their own freedom to protect the lives and freedoms of others is an honor for me,” said Parker. He matched at Navy Medical Center in Portsmouth, Va., where he will complete a general surgery residency.

Parker will be the first physician in his family and is set to begin his residency in June. “I first became interested in medicine at age 14. I felt like medicine provided a venue through which I could serve the less fortunate and underserved populations,” Parker said. “I have always believed we are blessed in order to be a blessing, and becoming a Navy medical officer and physician is simply another way I can make an impact in the lives of others.”

Anna Christensen, from Streator, Ill., started her career as a nurse, earning her master’s degree in nursing at USA. For 12 years, she served as a nurse practitioner in the Navy before returning to school to pursue a medical degree. “I just felt like there was more I needed to learn,” Christensen said.

Christensen matched at Eglin Air Force base in Ft. Walton Beach, Fla., where she will complete a family medicine residency. It was her first choice due to the proximity to her family and the excellent program it offered. “Being a family medicine physician has a very good career path in the military, with a lot of options in both focus and duty stations. I was very happy with my match,” she said. “USA has been an excellent school and I am so glad I went back to medical school. When you find the right nitch, it feels very good,” said Christensen, who will also be the first physician in her family. She will begin her residency in June.

Brent Griffin, from Boone, N.C., has served in the military for nearly 11 years. He enlisted in the Navy in 2004 and spent five years as a military police officer.  Griffin said he had been contemplating whether he should get out of the military once his time was up or if he should switch career paths. “I remember talking to a physician on duty and asking him the pros and cons of military medicine. He told me there was always something to learn in medicine and that really appealed to me. I then decided to go to medical school,” said Griffin.

Griffin matched at Dwight D. Eisenhower Army Medical Center in Fort Gordon, Ga., where he will complete his residency in internal medicine. “I was very impressed by the quality of the program,” Griffin said. “The residents receive a lot of one-on-one instruction with the attending physicians, which was exactly what I was looking for.” Griffin will also be the first physician in his family and will begin his residency in June.

During Honors Convocation in May, Parker, Christensen and Griffin will take the military oath of office and receive their new military rank.

The remainder of the USA College of Medicine Class of 2015 will find out where they matched on Match Day, March 20, 2015. The event will take place at the Mobile Convention Center in downtown Mobile.
Posted by Med School Watercooler at 2:37 PM No comments:

The University of South Alabama Department of Surgery will host the 6th annual Greater Gulf Coast Trauma and Acute Care Surgery Symposium on April 9-10, 2015, at the Renaissance Mobile Riverview Plaza Hotel in Mobile, Ala.

This year’s symposium will feature a different format from previous years. There will be three 15-minute lectures and a discussion panel. There will be a total of nine sessions. The lectures will include updates on trauma, emergency surgery and critical care issues. There will also be a section for nurses.

The 8th annual William A. L. Mitchell Endowed Lectureship in Traumatology and Surgical Critical Care will be held in conjunction with the seminar. This year’s lecture will feature internationally recognized trauma surgeon from Baltimore, Md., Dr. Thomas Scalea. Dr. Scalea is affiliated with multiple hospitals in the Baltimore area, including the University of Maryland Medical Center and Veterans affairs Maryland Health Care System-Baltimore Division. The lecture, titled “Enovascular Techniques for Trauma Care,” will take place April 9, 2015, at 4:45 p.m. at the Renaissance Mobile Riverview Plaza Hotel in Mobile, Ala. A reception will take place following the lecture. The William A.L. Mitchell Lecture and receiption is free and open to the public.

For more information or to register for the Symposium, click here or contact Rebecca Scarbrough at  rscarbrough@health.southalabama.edu.

In addition, an advanced trauma life support course will be offered in conjunction with the symposium on April 8, 2015. To register for the course, visit http://www.usahealthsystem.com/atls.
Posted by Med School Watercooler at 10:34 AM No comments:

The lecture, “Enovascular Techniques for Trauma Care,” will take place April 9, 2015, at 4:45 p.m. at the Renaissance Mobile Riverview Plaza Hotel in Mobile, Ala. A welcome reception will follow the lecture.

Dr. Scalea became the director of critical care and trauma at the King’s County Hospital in Brooklyn, N.Y., and built them into a nationally-recognized service. In 1991, Dr. Scalea founded the department of emergency medicine at King’s County Hospital and SUNY Brooklyn. In 1977, he became the physician-in-chief at the University of Maryland R Adams Cowley Shock Trauma Center. As director, he serves as chair within the school and hospital. As physician-in-chief, he is responsible for clinical care in all medical administrative functions of shock trauma.

The lecture is presented each year in memory of William A. L. Mitchell, who died in 2005 from severe traumatic injuries sustained in a car crash. In appreciation for the care he received at the USA Trauma Center, his family established the endowed lecture series to memorialize their son and brother and to improve trauma patient care in our region through education. Mitchell was a senior at UMS-Wright Preparatory School at the time of his death.

The USA Trauma Center is this region’s only Level I Trauma Center, serving as a community resource for citizens throughout the central Gulf Coast region. The center provides the highest level of care for critically ill and/or injured patients.

For more information about the lecture, contact Rebecca Scarbrough at rscarbrough@health.southalabama.edu.
Posted by Med School Watercooler at 10:34 AM No comments: