The University of South Alabama Internal Medicine Residency Program recently raised more than $6,500 for Feeding the Gulf Coast’s Backpack Program. The program helps meet the needs of children with food insecurities by providing them with nutritious and easy-to-prepare food to take home from school on weekends.

According to Judy Blair-Elortegui, M.D., who serves as the internal medicine residency program director and an internal medicine physician with USA Health, it is vital for physicians to be civic-minded and approach healthcare from a holistic mindset. “Our residents are happy to be involved in the community that they serve,” said Blair-Elortegui, who also serves as associate professor of internal medicine at the USA College of Medicine. “Addressing hunger is an important issue that we work to help address for our patients through our Boxing Out Hunger program as well as the students in the backpack program.”

Keniel Pierre M.D., chief internal medicine resident at USA Health, led the service project at USA Health the past two years. The original goal was to collect enough money to sponsor one or two children for the school year. Instead, they have been able to sponsor 43 children and distribute 550 bags of food.

The backpack program benefits students at Holloway Elementary School, a partner in education with USA Health University Hospital. Pierre said he is inspired to do even more. He would love to one day be able to provide every child at the elementary school with supplies and a toy for Christmas in addition to raising money for the backpack program.

“I strongly feel it is imperative for physicians to give back to the community they serve,” Pierre said. “It goes toward establishing a deeper and more trusting relationship between physicians and patients.”

Pierre decided to focus on giving back to school children after he discovered a need that was not being filled. “It was unfathomable that a child could go an entire weekend without a hearty meal and return to school Monday starving,” he said.

The passion he had to help served as the fuel to establish the annual donation drive.

Brittany Brown, director of operations for internal medicine at USA Health, helped the group make more connections. It was because of her involvement that donations were received from Pathway Church and the American Legion.

Members of the USA department of internal medicine said they love being able to give back and make a difference. “Everyone from the medical students, interns, residents, attendings, and administrators donated,” Pierre said. “Some even gave twice!”

Learn more about the Feeding the Gulf Coast Backpack Program.

Posted by Med School Watercooler at 8:30 AM No comments: 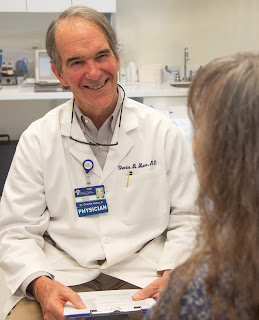 The August Med School Café lecture will feature Charles R. Hanes II, M.D., adjunct assistant professor of obstetrics and gynecology at the University of South Alabama College of Medicine and a urogynecologist with USA Health.

His lecture, "What Is Urogynecology?" will be held Friday, Aug. 16, at the USA Health Strada Patient Care Center. Lunch is served at 11:30 a.m., and the presentation begins at noon.

Hanes will discuss his subspecialty of urogynecology, which is devoted to the treatment of pelvic floor disorders. Reasons for visiting a urogynecologist include urinary or fecal incontinence, overactive bladder, vaginal pain or pain during intercourse, and pelvic organ prolapse.

Hanes earned his medical degree from Tulane University Medical School in New Orleans. He completed postgraduate training in general surgery at Vanderbilt University in Nashville, and his residency training in obstetrics and gynecology at Emory University in Atlanta.

The Med School Café lecture and lunch are provided free of charge, but reservations are required. For more information or to make reservations, contact Kim Partridge at (251) 460-7770 or email kepartridge@health.southalabama.edu.

Med School Café is a free community lecture series sponsored by USA Health. Each month, faculty and physicians share their expertise on a specific medical condition, providing insight on the latest treatment available.

Posted by Med School Watercooler at 8:00 AM No comments: 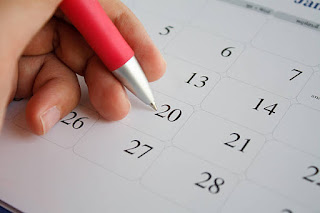 Cherie Revere, CRNP, a nurse practitioner at the USA Health Heart Center, will present at an upcoming cardiology grand rounds.

Her lecture, “Cardiology Research,” is set for 11:30 a.m. Friday, July 26, in the cardiology conference room at USA Health University Hospital.

Revere will provide cardiology faculty and staff with knowledge of the research process at the University of South Alabama, explain the objectives of the active research protocols for the cardiology department, and describe the qualifications for subject participation for each active protocol.

Cardiology grand rounds takes place every Friday of the month. The event is open to physicians, residents, nurses, social workers, and the healthcare team.

For more information, contact Angela Hunt at arhunt@health.southalabama.edu or (251) 471-7923.

Posted by Med School Watercooler at 1:12 PM No comments:

Tyler Kaelin, a fourth-year medical student, won first place for his poster presentation at the University of South Alabama College of Medicine third annual M3 Case Report Symposium for research that examines a case involving small bowel obstruction after gastric bypass surgery. His research was completed with Linda Ding, M.D., assistant professor of surgery at the USA College of Medicine.

The annual symposium provided 40 third-year students an opportunity to present poster presentations of case reports involving a variety of diagnoses from cancer to infectious diseases. First-, second- and third-place awards were given.

“Working directly with faculty gives our students a chance to review cases in detail with immediate feedback and provides additional learning,” Ding said. “Giving M3 students the opportunity to present their research at this forum supports their professional growth and prepares them for future presentations at larger meetings.”

Kaelin’s presentation was titled "Roux-en-Y are you obstructed?" It involved a patient who presented to the hospital with a small bowel obstruction after gastric bypass. This is a common complication in the first year following gastric bypass surgery, but this case was unique because of the patient’s history of Roux-en-Y gastric bypass 14 years prior.

“This case is important because most cases of small bowel obstruction will spontaneously resolve,” he said. “However, in patients with history of gastric bypass, their redesigned anatomy increases the risk of obstruction requiring intervention. Without a low threshold for surgical intervention in these patients, severe complications may arise.”

To complement his poster presentation, Kaelin created a 3-D model of the anatomy to help show his colleagues the “challenging surgical anatomy.”

“Dr. Ding knows that creativity is a strength of mine and encouraged me to take this extra step because visualizing the patient's complex anatomy was key to understanding this case and the surgical intervention that was performed,” he said. “This experience challenged me to understand complicated post-gastric bypass anatomy in a new way.”

Kaelin is from Milton, Florida, and studied biochemistry and mathematics at Berry College in Georgia before coming to the University of South Alabama for medical school. He plans to apply for general surgery residencies next year.

Posted by Med School Watercooler at 12:25 PM No comments:

Medical student hangs up her gloves for scrubs 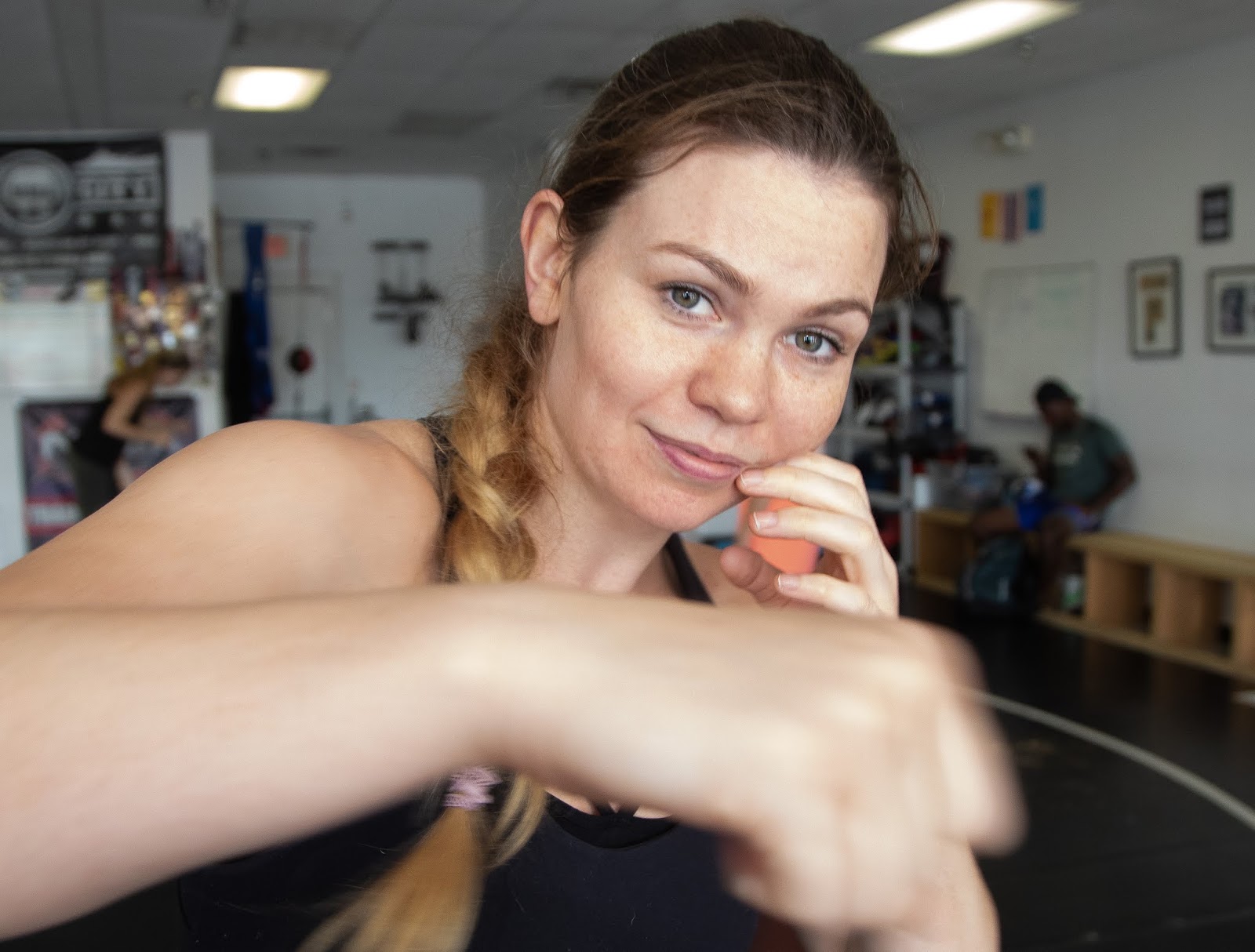 A force to be reckoned with inside the ring and the classroom, Paige Farley credits her mental toughness to a full-contact combat sport. “Mixed martial arts prepared me for medical school by instilling a level of discipline that’s required to succeed,” she said.

Farley, a rising second-year medical student at the University of South Alabama College of Medicine, faced many hardships during her childhood. In search of an outlet, she gave MMA a try. It became one of the most crucial decisions of her life. “I found the control I had so desperately sought,” she said. “I gained self-esteem and confidence, which gave me the ability to focus on helping others instead of myself.”

Now - a decade later - she is a medical student, a self-defense teacher and a coach. Farley also launched her own nonprofit organization in Birmingham, Alabama, teaching self-defense skills to women from rape crisis centers, domestic violence shelters, homeless shelters and the community.

Mixed martial arts pushed her to limits she had never experienced. “You never really know what’s inside of you until you have to confront it,” Farley said. “I figured out that I’m capable of pushing through just about anything and facing my own fears.”

In 2017, Farley began medical school at the USA College of Medicine, a dream she wanted to pursue since the age of 13. Soon after, she realized she had to choose between continuing to compete and completing medical school.

Ultimately, medical school won. “I think the idea of having a skill that was absolutely necessary appealed to me. I always had a knack for understanding scientific principles,” she said. “MMA requires weight cutting, which is not conducive with taking exams. The possibility of having black eyes and being in the gym two to four hours a day ended up not being manageable with the workload of medical school.”

Her decision was based on which career would be the best use of her time and talents.

Farley said MMA taught her the importance of consistency and a strong work ethic: “You have to be able to push through when things get hard and be able to set your life up in a way that makes success more likely.”

Six years of research in emergency medicine and trauma surgery before to medical school led Farley to focus on the path to becoming a trauma surgeon. “I fell in love with the lifestyle of trauma, the mission statement and the personality types that gravitate towards that specialty,” she said. “I can’t think of a more rewarding way to spend my life.”

Farley said MMA will forever be a part of who she is: “I want to use my experiences to empower others,” she said. “I would like to leave this world and my field better than I found it.”

Posted by Med School Watercooler at 10:56 AM No comments: