Mark Haygood, a third-year psychiatry resident at the University of South Alabama College of Medicine, was recently elected as the 2013-2014 Chair of the Assembly Committee of Member-in-Training representatives (ACOM) of the American Psychiatric Association.

ACOM is the representative legislative body for members of the American Psychiatric Association who are enrolled in psychiatric residency and fellowship training programs.

As chair, Haygood will represent the approximate 5,000 psychiatry residents in the United States at the APA Assembly.

“As the ACOM chair, my goal is to represent my peers’ core values and implement policy changes as necessary that will affect their training and future career in psychiatry,” said Haygood, of Gadsden, Ala.

While Alabama psychiatric residents have served as representatives in years past, Haygood is the first Alabama resident to serve as ACOM Chair.

“I have an interest in organized medicine,” said Haygood. “I sought a national position through the APA with a goal to determine how to maximize psychiatric awareness in society and determine ways to effectively treat underserved populations with mental illness.”

Haygood earned a master of science degree in microbiology from Jacksonville State University and a degree in osteopathic medicine from the Edward Via Virginia College of Osteopathic Medicine.

“I am extremely honored and excited to work with such an outstanding group of residents in the APA Assembly,” said Haygood. “I plan to be available to assist with changes that can improve our profession, resident needs and patient care.”
Posted by Med School Watercooler at 9:42 AM No comments:

LifeSouth Community Blood Centers will host a blood drive on Monday, June 24, 2013, from 7 a.m. to 6 p.m. in the 10th floor dining room at the University of South Alabama Medical Center.

Each donor will be entered into a raffle to win a BBQ grill and will receive a USA Medical Center meal ticket. There will also be drawings for a $25 gift card and a free 8x10 portrait.

Donors must be 17 or older (16-year-olds may donate with written parental consent), weigh 110 pounds or more, and show I.D. All donors will receive a recognition item and a cholesterol screening. For more information, call (888) 795-2707 or visit www.lifesouth.org.

Posted by Med School Watercooler at 9:41 AM No comments:

The University of South Alabama College of Medicine will hold its annual White Coat Ceremony at the USA Mitchell Center on June 22, 2013, at 10 a.m. During the ceremony, rising third-year medical students will be cloaked with their first white coats, the traditional dress of physicians for more than 100 years.

Dr. Maryella Sirmon, a USA College of Medicine alumna, will be the keynote speaker.

The ceremony marks a significant milestone for these students - the point where they will begin their clinical rotations and start interacting with patients.

"The white coat represents the mantle of the medical profession," said Dr. Susan LeDoux, associate dean of medical education and student affairs. "This ceremony creates a psychological, intellectual, and ethical contract for the profession."

For students, the White Coat ceremony serves as a reminder of the importance and responsibility they take by dedicating themselves to the care of patients. During the ceremony, the students in unison will take the Medical Student Oath, a promise to uphold the human aspects of medicine, such as sensitivity, compassion and respect for patients.

Dr. LeDoux said students, residents and faculty who have been inducted into the Gold Humanism Honor Society also will be recognized at the ceremony.

Each year, the USA Medical Alumni Association sponsors this event. Click here to read about last year's White Coat Ceremony.
Posted by Med School Watercooler at 8:54 AM No comments: 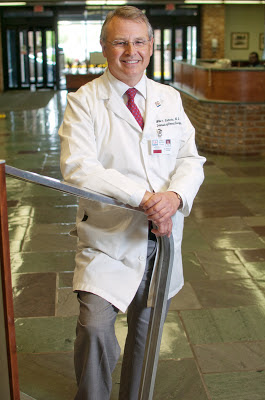 The June Med School Café lecture will feature Dr. William Richards, professor and chair of surgery at the USA College of Medicine and a bariatric surgeon with USA Physicians Group.

His lecture, titled “Surgical Treatment of Type 2 Diabetes,” will take place June 27, 2013, at the USA Faculty Club on USA’s main campus. Lunch will be served at 11:30 a.m., and the presentation begins at noon.

Dr. Richards’ lecture will include information on surgical options for treating obesity and Type 2 diabetes, as well as the impact these procedures have on improving patient health and quality of life.

Dr. Richards, who specializes in laparoscopic gastrointestinal surgery, will outline the latest procedures available, as well as discuss new techniques and research for people who are obese.

During the talk, he will also provide important information on various diseases associated with obesity, including diabetes, heart disease and hypertension.

Dr. Richards has performed more than 2,000 laparoscopic procedures since 1990, including numerous laparoscopic bariatric procedures. He earned his medical degree from the University of Maryland School Of Medicine in Baltimore. He completed his internship at the University of Florida in Gainesville, Fla., and his surgery residency at the University of Maryland. Following his residency, Dr. Richards completed a surgical fellowship in portal hypertension and endoscopy at Emory University in Atlanta. In addition, he also completed a research fellowship in gastrointestinal motility at the Vanderbilt Medical Center in Nashville.

The Med School Café lecture and lunch are provided free of charge, but reservations are required. For more information or to make reservations, call Kim Partridge at (251) 460-7770 or e-mail kepartridge@usouthal.edu.

Med School Café is a free community lecture series sponsored by the USA Physicians Group. Each month, faculty from the USA College of Medicine share their expertise on a specific medical condition, providing insight on the latest treatment available.
Posted by Med School Watercooler at 11:03 AM No comments: