As the opioid crisis continues to impact communities across the world, a physician-scientist at USA Health has been named the principal investigator of an international phase II clinical trial to evaluate the safety of a drug for babies born with neonatal opioid withdrawal syndrome.

Richard M. Whitehurst Jr., M.D., professor of pediatrics and assistant professor of pharmacology at the University of South Alabama College of Medicine, was selected by Chiesi Farmaceutici of Parma, Italy, to lead a five-year multi-center study spanning at least 19 clinical locations in the United States and abroad.

Use of opioids during pregnancy can result in a drug withdrawal syndrome in newborns called neonatal abstinence syndrome or neonatal opioid withdrawal syndrome. An analysis of the extent and costs of the syndrome found that it’s rising in the United States, according to the National Institute on Drug Abuse. From 2004 to 2014, an estimated 32,000 infants were born with neonatal abstinence syndrome, which is equivalent to one baby suffering from opioid withdrawal born every 15 minutes.

Whitehurst and other clinical staff in the department of pediatrics at USA Health have participated in previous studies with Chiesi related to neonatal opioid withdrawal syndrome, previously known as neonatal abstinence syndrome.

This summer, Whitehurst and NICU staff will begin enrolling infants that were exposed to opioids during the last month before delivery, Dean said.

“Unfortunately, the rates are high across the nation for babies who are suffering because they are born with opioid withdrawal syndrome,” Whitehurst said. “We want to find the best methods possible to help those babies through a variety of measures and protocols.”

Research shows newborns with the syndrome are more likely than other babies to have low birthweight and respiratory complications. Nationally, rates of opioid use disorder at delivery caused hospitalizations to more than quadruple from 1999 to 2014, to 6.5 per 1000 births in 2014. That year, $563 million was spent on costs for treatment of the syndrome, the National Institute on Drug Abuse reported.

Whitehurst, who begins visits with mothers as part of the prenatal care team prior to childbirth, has a long history of building successful relationships with parents before they deliver, Dean said, to help ensure the best outcomes for babies. Because of other protocols established by Whitehurst, the length of stay for newborns withdrawing from opioids and other drugs has decreased significantly in the past five years at USA Health Children’s & Women’s Hospital.

“We’ve adopted non-medication treatments, such as swaddling the babies differently, adapted the light and noise levels so they are not over stimulated, and taught parents how to care for them when they go home,” Dean said.
Posted by Med School Watercooler at 8:00 AM No comments:

USA Health’s universal masking guidelines require faculty, staff and learners within the hospitals and clinics to wear face masks from the time they arrive at a facility until they leave for the day.

USA Health announced the policy April 3 in a letter to employees from Owen Bailey, chief executive officer for USA Health, and John V. Marymont, M.D., vice president for medical affairs and dean of the University of South Alabama College of Medicine.

“While wearing a mask when we are in contact with others, we can prevent transmission of the virus. We are also protecting ourselves from becoming infected by someone else,” said Benjamin Estrada, M.D., professor of pediatrics at the USA College of Medicine and a pediatric infectious diseases physician at USA Health.

The USA Health policy, which was updated in May, offers these specifics:
In addition to masks, the USA College of Medicine dress code for medical students in clerkships and clinical skills sessions requires them to wear official gray scrubs and no white coats or business attire during the COVID-19 pandemic.
Posted by Med School Watercooler at 1:12 PM No comments: 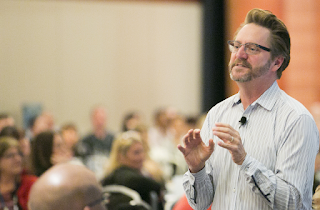 The University of South Alabama Office of Continuing Medical Education will host the South Alabama Conference on Mental Health from 9 a.m. to 12 p.m. Wednesday, July 29. The conference, titled "Better Results with Scott Miller, Ph.D.," will be available via Zoom video conferencing.

Miller is a co-founder of the International Center for Clinical Excellence, an international consortium of clinicians, researchers and educators dedicated to promoting excellence in behavior health. He conducts workshops and training in the United States and abroad, helping hundreds of agencies and organizations, both public and private, to achieve superior results. He is one of a handful of invited faculty whose work, thinking and research is featured at the prestigious "Evolution of Psychotherapy Conference." His humorous and engaging presentation style and command of the research literature consistently inspires practitioners, administrators and policy makers to make effective changes in service delivery.

The cost is $10 to register. To register online, visit the CME Tracker website.
Posted by Med School Watercooler at 3:52 PM No comments:

Research published this month by a collaboration of scientists of a chromosome-level assembly of the cat flea genome revealed rampant gene duplication and genome size plasticity.

In other words, the scientists discovered that no two cat fleas have the same genome sequence.

The study was published online on June 19, 2020, by BMC Biology, a peer-reviewed international research journal.

Fleas are the small parasites of birds and mammals whose blood-feeding can transmit a variety of serious pathogens causing diseases including bubonic plague, flea-borne rickettsioses (typhus and spotted fever) and cat scratch disease.

Historically, a lack of flea genome assemblies has hindered research, especially comparisons to other disease vectors, according to the scientists. The researchers set out to generate a genome sequence for the cat flea, known as Ctenocephalides felis, an insect that generates a substantial human health risk throughout the world.

A genome is a complete set of DNA sequences of an organism. By combining specific sequencing of DNA derived from multiple inbred female fleas, the scientists generated a chromosome-level genome assembly for the cat flea. The study provides the first genome sequence for Siphonaptera, which is expected to substantially inform comparative studies on insect vectors of human disease, according to the authors.

The accrued resources and knowledge from the study are timely as a rise of typhus cases have been reported in Southern California and Galveston, Texas. These cases, according to the authors, are directly attributable to fleas associated with increasing populations of rodents and opossums, and requires immediate efforts to combat this serious and underappreciated risk to human health.

The University of South Alabama Medical Alumni Association will host a virtual reunion via Zoom on Wednesday, July 29, beginning at 6:30 p.m.

“We were incredibly disappointed to have to cancel the summer 2020 COM Alumni Reunion, and knew we couldn’t wait a whole year for everyone to get together,” said Ann Eleece Kouns, associate director of alumni relations at the USA College of Medicine. “Although the format is different, we hope our alumni family will take this opportunity to check in with their USA College of Medicine classmates and colleagues on July 29.”

Details and Zoom links to follow as the event gets closer.

Posted by Med School Watercooler at 2:08 PM No comments: