USA Health is the first and only healthcare system on the Gulf Coast with the technology to identify organisms that cause diseases – more commonly known as pathogens – in as little as 40 seconds. Advances in microbiology translate to improved patient outcomes, as physicians can now implement proper antibiotics therapies, among others, more quickly and effectively.

After culturing and isolating bacteria and fungi from patient specimens, the organisms are identified and tested to determine which drugs will inhibit or stop their growth. In the past, patients and physicians had to wait up to a week to identity organisms that caused infections in patients.

“This is personalized microbiology,” said James Elliot Carter Jr., M.D., director of clinical laboratories and a pathologist with USA Health. “Imagine what that means for patient care. Instead of wasting high-powered antibiotics that may not do any good and increase antibiotic resistance, the patient can now be started on the right antimicrobials or antifungals immediately.”

Carter, who also serves as a professor of pathology at the USA Health College of Medicine, said rapid pathogen identification saves money for patients and providers. “Patients can be more quickly discharged if they don’t need to be here,” he said. “They aren’t sitting in the hospital for three days being treated for meningitis that they don’t have. It makes a huge difference in patient turnaround.”

Carter said the new lab equipment will be able to help patients and physicians outside USA’s health system. Laboratories previously had to send hard-to-identify organisms to the Alabama Department of Health in Montgomery for identification. Now labs can send those cases to USA Health, he said.

The MALDI biotyper acts as a “fingerprinting” system to identify bacteria, yeast and fungi. “Before the MALDI, we were identifying organisms by biochemicals,” explained Teresa Barnett, medical technologist supervisor with USA Health. “We had several kits that took anywhere from three to five days to identify some of these organisms.”

In contrast, the MALDI identifies organisms by the unique spectrum of the major proteins and peptides that constitute their makeup. “The MALDI takes a fingerprint, so it analyzes the peaks and valleys of the ion protein makeup and then compares it to a library in the software,” Barnett said.

“This instrument is much more sensitive than what we used in the past,” Barnett said. “Also, it uses bottles that are lighter in weight and requires a smaller volume of blood, which makes it easier for our phlebotomists to get adequate samples from our patients, especially pediatric patients.”

Posted by Med School Watercooler at 1:49 PM No comments:

Alumni and their families reunited in Pensacola Beach for the 2019 Medical Alumni Reunion Weekend, hosted by the University of South Alabama Medical Alumni Association.

View more photos from the weekend on Flickr.
Posted by Med School Watercooler at 10:29 AM No comments:

Rising fourth-year medical students at the USA Health College of Medicine presented interesting, rare and novel case studies from their third-year rotations at the Third Annual M3 Case Report Symposium at the Strada Patient Care Center on May 31.

The symposium, hosted by the College of Medicine, drew 40 entries on cases involving a variety of diagnoses from cancer to infectious diseases.

Tyler Kaelin earned the first place award. He presented on the case of a patient with a small bowel obstruction, a common complication in the first year following gastric bypass surgery.

“The case was unique because of the patient’s surgical history of gastric bypass 14 years prior,” he said. “This experience has been beneficial because it challenged me to understand complicated post-gastric bypass anatomy in a new way.”

Sara Anne Stringfellow earned for second place for her report on the case of a pregnant women who presented with abdominal pain and nausea. Surgery determined that the woman had a small bowel obstruction and uterine rupture -- each rare during pregnancy -- that were determined to be the result of past surgery for uterine fibroids.

Stringfellow said the case showed why pregnant women who experience sudden, severe abdominal pain should be assessed thoroughly for more acute complications. It also highlighted the importance of counseling women on the risks associated with pregnancy following extensive abdominal surgery, she said.

Anna Stevens took third place for her report on a case of severe relapsing neuromyelitis optica, highlighting the course of the patient’s disease and lack of response to different therapies over time.

“The case highlighted a challenge in disease management while demonstrating a need for further investigation to identify which patients may be refractory to therapy and why,” Stevens said. “I also discussed the need and potential of emerging therapies to better treat refractory disease.”

“It was exciting to get to hear what all of my classmates chose to present and see them discuss topics they were passionate about,” Stringfellow said. “Our class has been very close knit throughout our years of medical school, so I’ve loved watching everyone come into their own this year and decide what they want to do with their career and this experience was a great culmination of that.”

View more photos from the symposium on Flickr.
Posted by Med School Watercooler at 9:38 AM No comments: 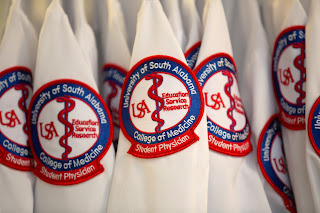 The University of South Alabama College of Medicine will host its annual White Coat Ceremony at 10 a.m. on June 15, 2019, at the USA Mitchell Center on the main campus.

During the ceremony, rising third-year medical students in the Class of 2021 will be cloaked with their white coats, the traditional dress of physicians for more than 100 years.

Select students, along with residents and faculty members, will be inducted into the Gold Humanism Honor Society during the ceremony. Inductees are chosen by outgoing third-year medical students for practicing patient-centered medical care with altruism, integrity and compassion.

Each year, the USA Medical Alumni Association sponsors the event.
Posted by Med School Watercooler at 3:16 PM No comments: