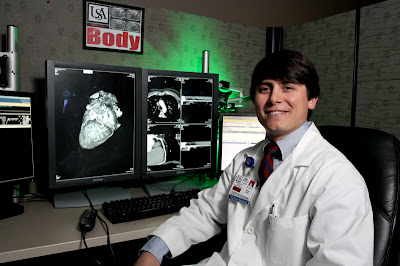 The next several weeks will be extremely busy for senior medical students graduating from the University of South Alabama College of Medicine. After attending Honors Convocation Friday, May 11 and commencement the following day, medical school graduates will move to the next phase of their training as they report to their residency programs. Carlton "Drew" Smith is among those who will be starting their residencies this summer.

Smith will start at the Baptist Health System in Birmingham, Ala., for a transition year, and then to Johns Hopkins Hospital in Baltimore, Md., for his residency training.

“I felt I was reaching to the stars by shooting for Johns Hopkins,” Smith said. “When I found out that I had matched at Johns Hopkins, I was ecstatic.”

Smith was born with Tetralogy of Fallot, a heart defect where the vessels leading from the heart to the lungs are constricted.

“My condition was fairly severe and I had my first operation at the age of 18 months,” Smith said. “During the surgery they accidently nicked my natural pace maker, and my heart then beat out of sync. Six weeks after that, I had a permanent pace maker.”

Because Smith could not play sports or any high-contact activities while growing up, he took art classes beginning at the age of 10. He started his undergrad years at Auburn University majoring in architecture because of his art background. He later decided to change his major to biomedical sciences after a life-changing experience.

“I have had two major surgeries where they have had to go in and break open my sternum; first at 18 months and the next after my freshman year as an undergrad at Auburn,” Smith said. “All I remember is waking up on a ventilator and my arms strapped down because I had woken up early and tried to pull it out. The whole process of going through it and seeing it from that prospective opened my eyes. The light came on, and that’s when I decided I wanted to pursue a career in medicine.”

Coming into medical school, Smith assumed he would go into cardiovascular surgery because of his personal condition. However, during his clinical years his interests turned to radiology.

“In radiology I enjoy paying attention to details such as architecture required,” Smith said. “With radiology you have to know what to look for and identify what the next step is going to be. It’s the perfect combination for me.”

When Smith starts his residency training in radiology at Johns Hopkins Hospital next summer, it will complete a circle in his life. He will return to “the place that helped to saved my life,” Smith said. “Johns Hopkins pioneered the first surgeries of Tetralogy of Fallot, so it was almost like coming full circle,” Smith said. “Here’s a place that pushed the envelope and here I am leading the way with their innovation. Because of them, I am able to be here today.”

With determination and hard work, much of Smith’s life has fallen into place. At Johns Hopkins, he will be near his younger sister who currently lives in Washington, D.C. They have a close relationship and common bond as she was also born with Tetralogy of Fallot, but not as severe as Smith’s condition.
Posted by Med School Watercooler at 4:00 PM 1 comment: 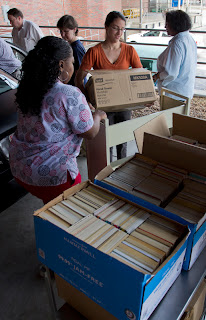 The University of South Alabama Biomedical Library recently delivered more than 2,400 books collected during National Library Week to the USA Children's Medical Center as part of the Reach Out and Read program.

Reach Out and Read is a national non-profit organization that encourages early literacy and school readiness in pediatric exam rooms nationwide by giving books to children and advice to parents about the importance of reading.

“The goal of the program is to encourage childhood literacy in children throughout our community," USA pediatrician Dr. Cindy Sheets said.

The Children's Medical Center, which is the pediatric teaching clinic for the University, became a member of the Reach Out and Read initiative seven years ago. The clinic received an initial grant plus yearly sustainability funds to buy discounted books from Scholastic and give to children at their check-ups from 2 months to 5 years of age.

"New or gently used donated books from this book drive allowed us to hand out books at well-visits to ages outside of the official guidelines of our grant," Dr. Sheets said. "We are truly grateful for the generosity."
Posted by Med School Watercooler at 4:00 PM No comments:

Dr. Brevard, who was raised in Mobile and graduated from St. Paul’s in 1979, was recognized for his professional accomplishments and civic leadership. He currently serves as a trauma surgeon in the Level I Trauma Center at the USA Medical Center.

Dr. Brevard served in the United States Air Force for 27 years. He was deployed to Afghanistan twice, in 2002 and 2008. In 2008, he served as chief of trauma for all United States Forces in Afghanistan. Under his watch, 99 percent of troops injured in combat survived their injuries, the highest percentage in the history of warfare.

While in the Air Force, Dr. Brevard was deployed to Africa with United Nations troops in response to the genocide in Rwanda, cared for troops injured in the "Black Hawk Down" situation, and treated victims from the ethnic war in the Balkans. In 2002, he was named the Special Operation's and the U.S. Air Force Global Health Officer of the Year. In 2003, he assumed command of the 15th Medical Operation Squadron and became the chief operating officer of a clinic providing healthcare to 10,000 military personnel and their families at Hickam Air Force Base in Hawaii.

Prior to his appointment at USA, Dr. Brevard was director of the Air Force Center for Sustainment of Trauma and Readiness Skills (CSTARS) in Baltimore.

Dr. Brevard earned his bachelor’s degree in biology from Birmingham-Southern College in Birmingham, Ala., and his medical degree from USA. In addition, he received his master of public health degree from the Louisiana State University Health Science Center in Shreveport, La.

Dr. Brevard will be among faculty recognized by medical students at the USA College of Medicine Honors Convocation May 11, 2012, with a red sash to be worn over his academic regalia. The sash recognizes attending physicians who had the most meaningful impact on students’ medical education.
Posted by Med School Watercooler at 4:00 PM No comments:

Medical students at the University of South Alabama were recently featured in a Lagniappe article after their kickball team, the Toxic Shockers, became the 2012 league champions of GOKickball Mobile.

Grant Zarzour, a former medical student and current orthopaedic surgery resident at the USA Medical Center, set up the kickball league in Mobile three seasons ago.

Click here to read more about the team in this week's Lagniappe.
Posted by Med School Watercooler at 3:59 PM No comments:

The University of South Alabama's Center for Autism and Developmental Disabilities is hosting Autism Grand Rounds on May 11, 2012, from 8:30 a.m. to 10 a.m. at the College of Education, Room 3212, at University Commons.

As part of this year's professional conference, Dr. Jennifer Gillis, associate professor of psychology at Auburn University, will present "Considerations for the Assessment and Treatment of Anxiety in Individuals with Autism Spectrum Disorders.”

This event is open to USA faculty, staff, and students. The meetings are designed to provide a forum for discussion of research and service provision within the University community related to autism spectrum disorders and developmental disabilities.

For additional information, contact Amy Mitchell at (251) 415-8643 or abmitchell@usouthal.edu.
Posted by Med School Watercooler at 3:59 PM No comments: