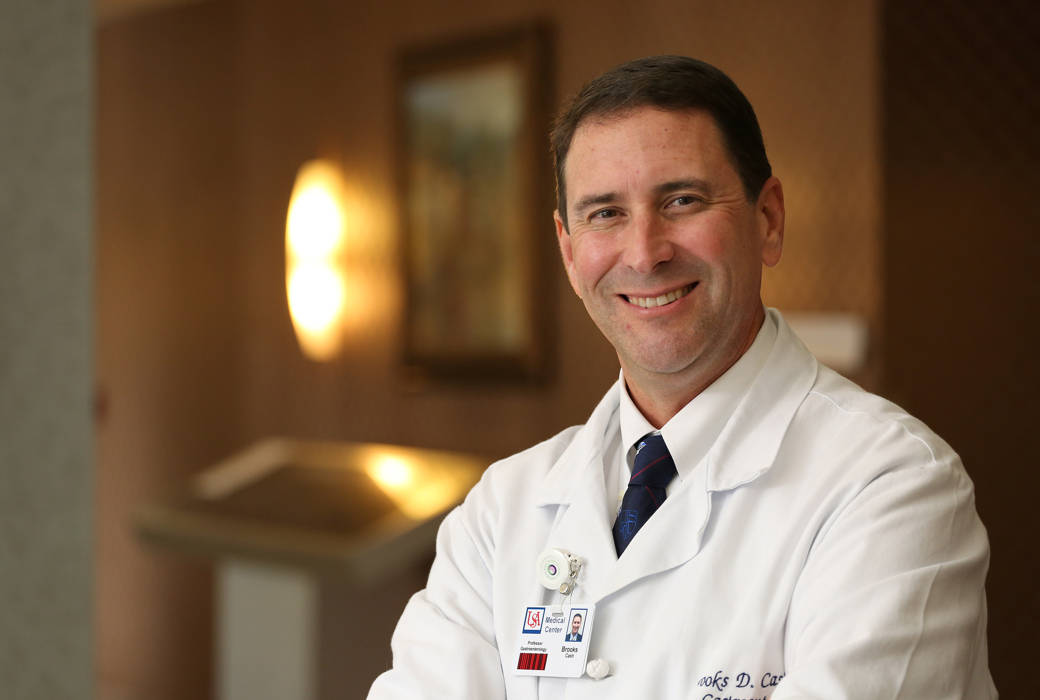 Dr. Brooks Cash, professor of internal medicine at the University of South Alabama College of Medicine and a gastroenterologist with USA Physicians Group, recently published a review article titled “Emerging Role of Probiotics and Antimicrobials in the Management of Irritable Bowel Syndrome.”

Dr. Cash and his colleagues comprehensively reviewed decades of research materials and literature studying Irritable Bowel Syndrome (IBS) and the roles of probiotics and antibiotics.

IBS is a disorder that causes abdominal discomfort or pain. It is associated with a range of symptoms, including intermittent abdominal pain accompanied by diarrhea, constipation, or alternating episodes of both. Other symptoms such as bloating may also be present.

According to Dr. Cash, what causes IBS still remains largely unknown, but a variety of factors play a role in the development of IBS such as stress, gastrointestinal infections, diet, and hormones.

The goal for Dr. Cash’s research review was to evaluate how effective probiotics and antibiotics are on improving IBS symptoms. Probiotics are preparations that consist of bacteria or yeasts, or both that are meant to improve health through their consumption, although the exact mechanisms of how probiotics work in the gastrointestinal tract remain largely conjectural. Because they are “natural product," probiotics are not classified as medicines and are not tightly regulated by the Federal Drug Administration (FDA).

“The idea that probiotics are able to benefit IBS patients still remains very weak, based on our extensive review of the available published data,” Dr. Cash said.

At this point, Dr. Cash does not recommend probiotics for treatment of IBS. When reviewing the data, antibiotics showed more promise than probiotics as therapy for IBS.

Recently, an antibiotic called Rifaximin was approved for IBS and diarrhea. According to Dr. Cash, the data for Rifaximin is quite strong, meaning that it has convincingly demonstrated an ability to improve symptoms of IBS, specifically bloating, abdominal pain and altered stool form, in several large, rigorously designed clinical trials that were presented to the FDA. The exact way that antibiotics work in IBS is unknown, but prevailing theories include the hypothesis that antibiotics may affect the metabolic activity of bacteria in the gastrointestinal (GI) tract and/or that they may also alter the interactions of the GI tract immune system and bacteria. Rifaximin, since it is a non-absorbed antibiotic, “is particulary attractive based on its excellent safety profile and lack of demonstrated bacterial resistance, a real concern with other antibiotics that are systemically absorbed,” said Dr. Cash.  He added, “Rifaximin’s safety profile has been shown to be similar to placebo in numerous clinical trials.”

“IBS is very common, and for many years the exact causes for IBS have been unknown. Now we are starting to unravel some of the potential causes of IBS,” Dr. Cash said. “The bacteria in the gastrointestinal tract seems to play a major role in some cases of IBS and we are now starting to develop therapies that address the causes of IBS rather than just the symptoms."
Posted by Med School Watercooler at 11:05 AM No comments: 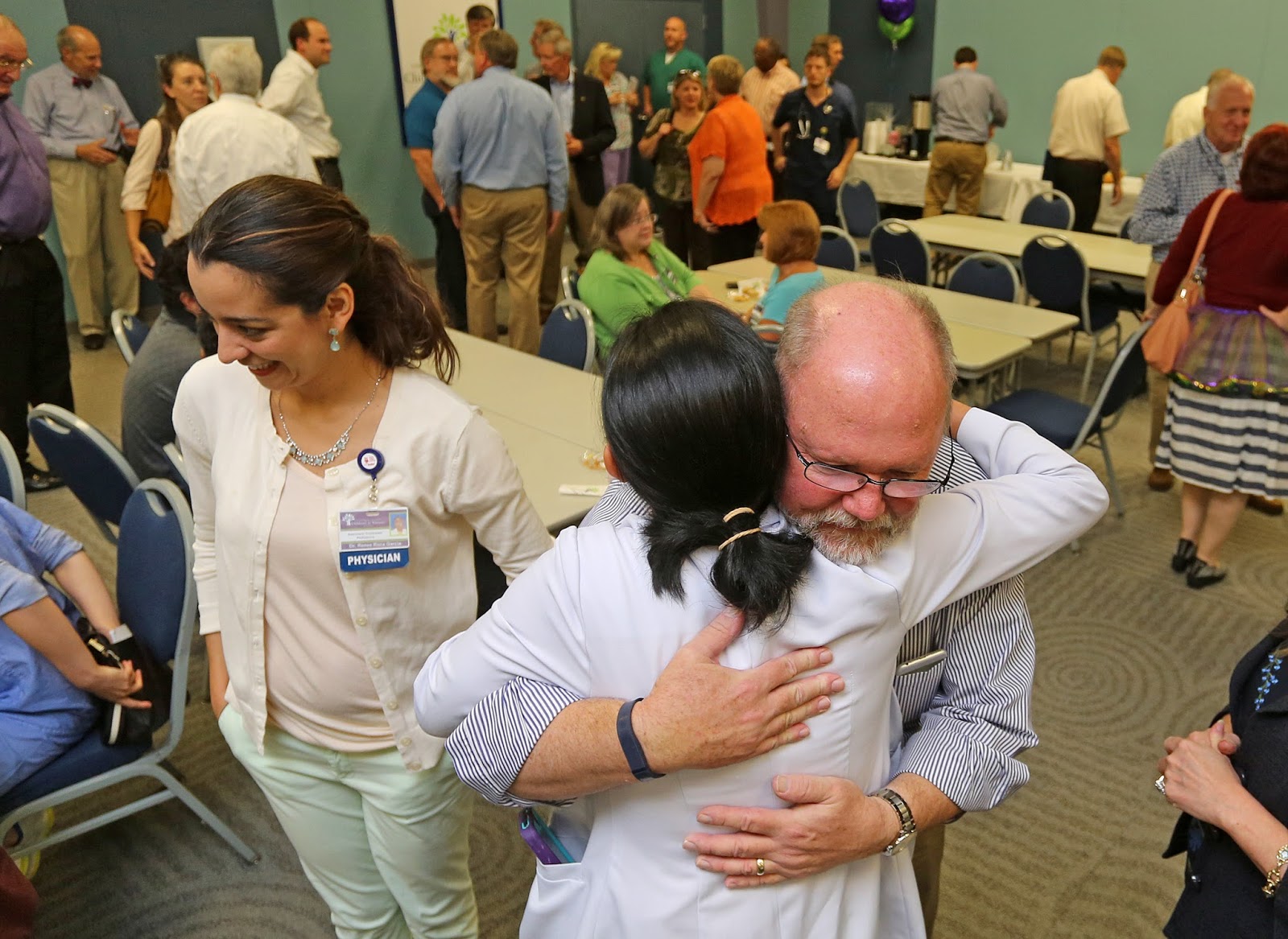 Click here to view more photos from the reception.
Posted by Med School Watercooler at 2:56 PM No comments: 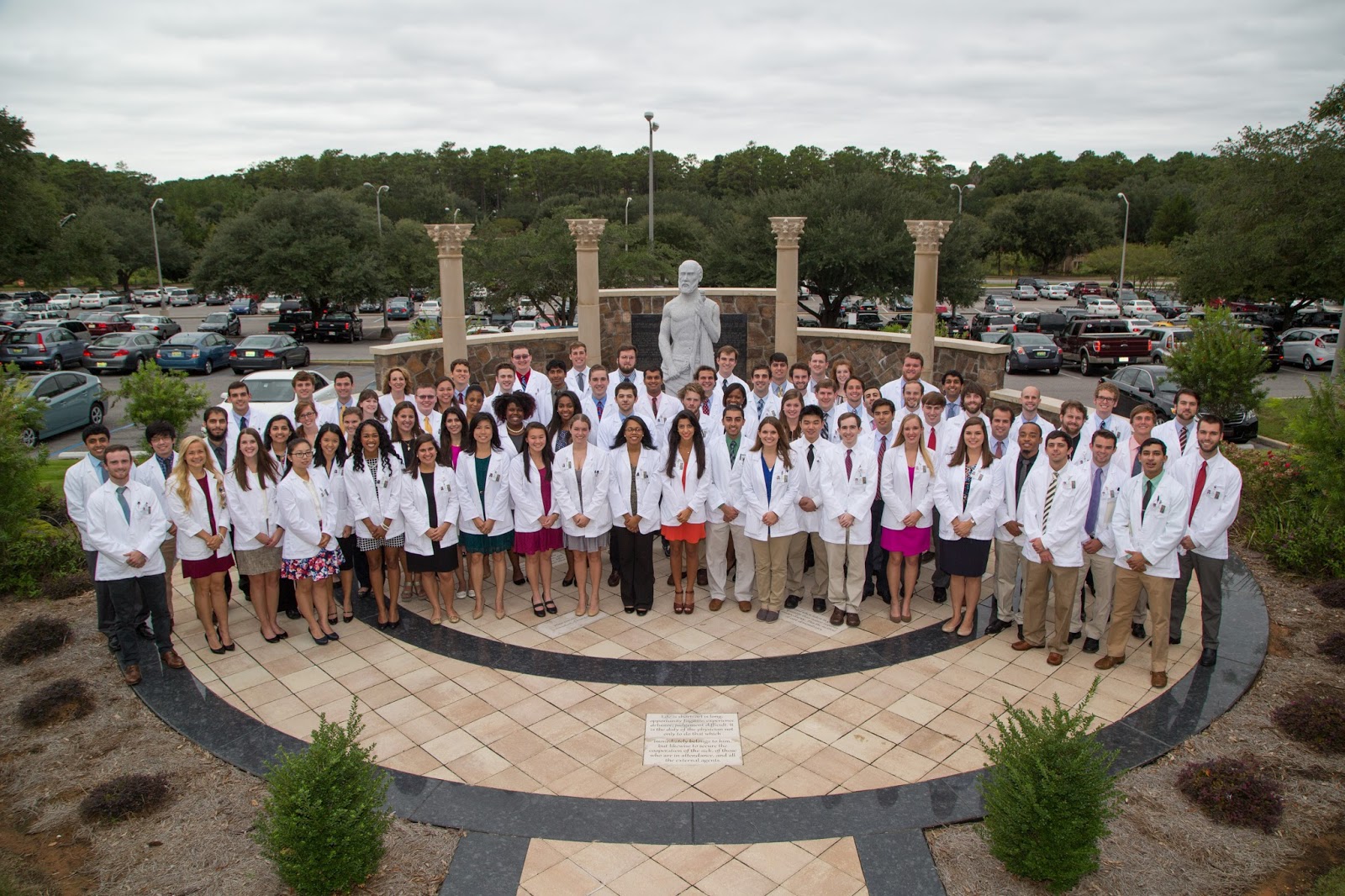 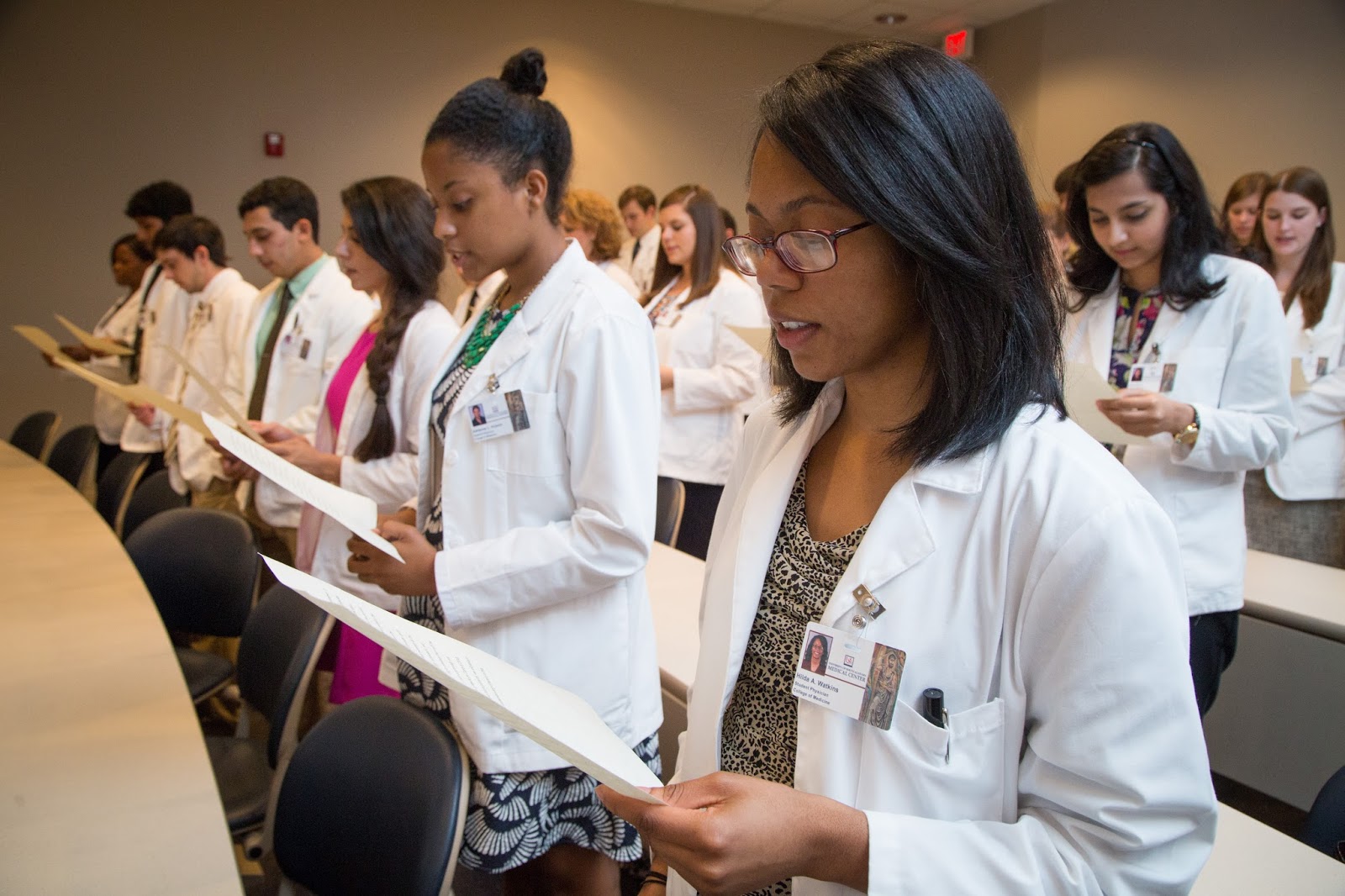 Freshman medical students at the University of South Alabama College of Medicine took the Class of 2019 Oath during a ceremony on Sept. 28, 2015.

This was the first of three oaths that students take while in medical school at USA. In a year and a half, these students will take the Medical Student Oath at the White Coat Ceremony as they transition into clerkships.

“In neither the Hippocratic Oath nor the Medical Student Oath do students have any input. They simply read the oath and commit to words that someone else wrote,” said Dr. Susan LeDoux, associate dean of medical education and student affairs. “The oath that the students took today is unique to their class. They created this oath. Thus, they are committing to something that they wrote."

To view more photos from the ceremony, click here.

The Oath, developed by the Class of 2019, is shown below.

"I swear to fulfill, to the best of my ability and judgment, this oath and commitment...to dedicate my life to the responsible care and well-being of all of my patients regardless of race, religion, sexual orientation, gender identification and socioeconomic status, and to follow the ethics, laws and standards of the community in which I live and work. I swear to establish and sustain the utmost level of trust with my patients, protecting their confidentiality and remaining empathetic to their concerns regardless of the circumstances. I pledge myself to the tireless pursuit of medical knowledge, and to remain a student, always learning and honing the skills and traits necessary for the treatment of those I am charged with. I swear to have integrity, compassion and respect for my patients, peers and colleagues, always trying to empower them with the knowledge necessary to maintain an overall healthy life, both emotionally and physically. Lastly, we, as the students of USA College of Medicine Class of 2019, hereby give this oath to our teachers, colleagues and future patients: we will always embrace and uphold the tradition of altruism and understanding inherent in this honorable profession."
Posted by Med School Watercooler at 12:59 PM No comments: 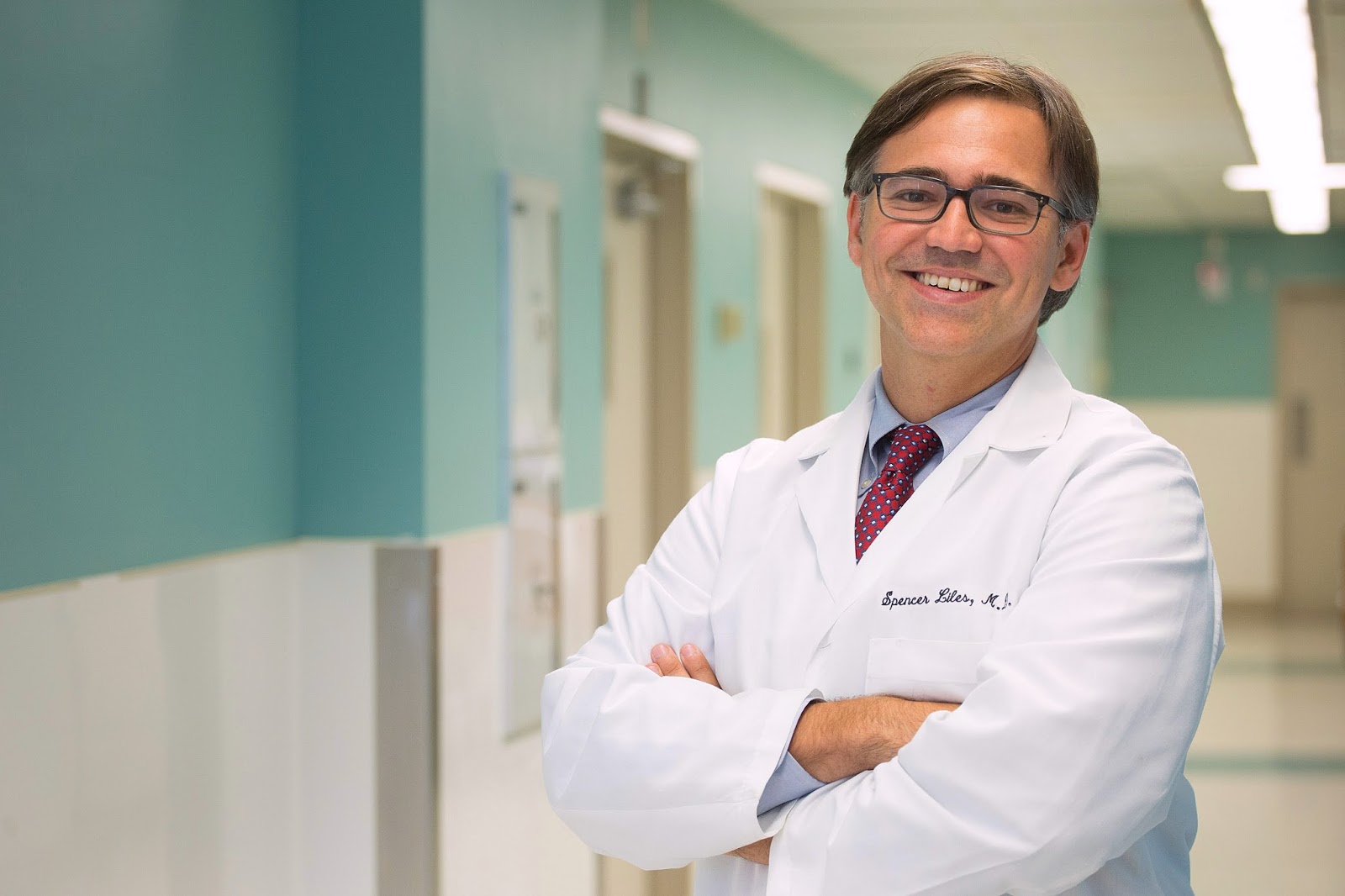 Dr. J. Spencer Liles recently was appointed assistant professor of surgery at the University of South Alabama College of Medicine and will serve as a surgical oncologist with USA Physicians Group.