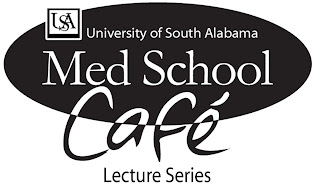 The July Med School Cafe lecture, "Total Hip Replacement" featuring Dr. Sudhakar Madanagopal, has been canceled and is being rescheduled for October.

We apologize for any inconvenience this may have caused, and we hope to see you at our next lecture, "Tis the Season to be Sneezin': Allergies in Mobile," featuring Dr. Druhan Howell, assistant professor of internal medicine and pediatrics at the USA College of Medicine and an allergist with USA Physicians Group.

Dr. Howell's lecture will take place Aug. 20, 2013, at the USA Faculty Club on USA's main campus. For more information or to make reservations, call Kim Partridge at (251) 460-7770 or e-mail kepartridge@usouthal.edu.
Posted by Med School Watercooler at 3:59 PM No comments: 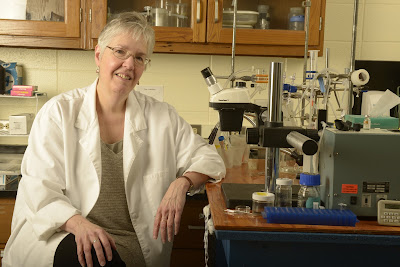 Dr. Mary Townsley, professor of physiology and internal medicine at the University of South Alabama College of Medicine, recently received the 2013 Leadership Award from the Pulmonary Circulation Assembly of the American Thoracic Society (ATS).

Dr. Townsley was selected for the award, which was presented at the annual ATS meeting in Philadelphia, based on her decades of leadership and devoted service to the pulmonary circulation research community. “I was rather stunned,” Dr. Townsley said of receiving the award. “It’s quite an honor to be recognized by a group like the American Thoracic Society.”

Dr. Townsley serves on the Planning Committee for the ATS Pulmonary Circulation Assembly and has served on the Organizing Committee for the Grover Conference, an international conference on lung vascular biology. In addition, she has chaired peer-review study sections for lung biology, the United Peer Review Steering Committee, and the Council on Cardiopulmonary, Critical Care, Perioperative and Resuscitation, all for the American Heart Association (AHA).

“I learned a great deal of science from him, and my work ethic was bolstered by his enthusiasm,” she said. “He was a leader in our institution and also in our professional societies."

Dr. Townsley credits Dr. Taylor for introducing her to the AHA leadership group, which she later came to chair. “He was one to really get involved, and I think I learned the value of that from him.”

Dr. Townsley said getting involved in professional societies is an important aspect for all professionals. “It’s not only a way to network,” she said, “but also a way to contribute to the organization that provides infrastructure for our work.”

To learn more about the American Thoracic Society, visit http://www.thoracic.org/.
Posted by Med School Watercooler at 10:02 AM No comments: 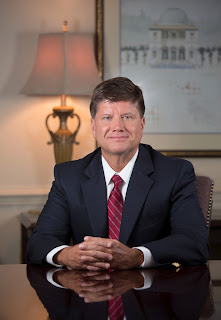 Vince Gill was recently appointed practice director of internal medicine and neurology at the University of South Alabama Physicians Group. He replaces Mel Leggett, who will retire after more than 11 years of service.

Gill has served on active duty in the United States Air Force since 1995 and is retiring as a lieutenant colonel. He has more than 20 years of health care management experience in 23 countries.

Prior to joining USA, Gill was senior group practice manager at Keesler Medical Center in Biloxi, Miss. During his military career he served two tours as U.S. Forces Afghanistan Deputy Surgeon and senior medical mentor to the Afghan National Security Forces in Paktia Province, for which he was awarded two Bronze Star Medals. In addition, he served as director of TRICARE Alaska Operations in Anchorage, Alaska, and chief of theater medical operations at Ramstein Air Base, Germany.

Gill earned his bachelor’s degree in management and his MBA in finance and health policy from Auburn University at Montgomery in Montgomery, Ala.
Posted by Med School Watercooler at 10:42 AM No comments:

What began as a regular day for USA family medicine resident Dr. Aaron Morgan soon turned into something much more.

On May 15, Dr. Morgan had just finished his workout at the YMCA in Daphne, Ala. Per his usual routine, he sat in the sauna, which overlooks the YMCA’s pool. It wasn’t long before he noticed something unusual – the pool was empty and it had become very quiet.

The swim team was huddled up, and someone was on the ground covered up with a towel. The staff, who was aware of Dr. Morgan’s medical background, saw him looking that way and asked him to come over.

When Dr. Morgan reached Sam Cockrell, the 16-year-old swimmer and local triathlete was facedown and suffering from what Dr. Morgan believed was cardiac arrest with agonal breathing – an abnormal pattern of breathing characterized by labored breathing and snoring.

“They thought he was having a seizure and called the EMT,” Dr. Morgan said. “However, it’s very unusual for a healthy child with no seizure disorder to suddenly start seizing.”

This is when Dr. Morgan said he became concerned. “He was completely unresponsive,” he said. “I tried talking to him and was telling him to squeeze my hand. But he didn’t. I started checking for pulses and couldn’t feel any.”

Dr. Morgan said he cleared everyone away and flipped Sam over. At that point, Sam had stopped breathing. Dr. Morgan immediately started CPR while the YMCA staff retrieved the defibrillator.

“If someone is thought to be seizing and you can’t find a pulse, we’re taught in residency to start CPR immediately,” he said. “When it happened, I really didn’t have to think anymore. I just went through the motions of what we’re trained to do. It was very important to be as calm as possible so that we could maximize Sam’s resuscitation.”

Dr. Morgan shocked Sam with the defibrillator multiple times and continued CPR until the ambulance arrived. Sam’s heart started beating en route to Thomas Hospital. Soon after arriving there, he was transferred to the intensive care unit at USA Children’s & Women’s Hospital.

Dr. Morgan, who will be one of two chief residents for the USA Department of Family Medicine next year, said his medical training at USA helped prepare him for this event. “We have a unique group of residents in that we get hands-on experience from day one. Our medical faculty foster an autonomous learning environment that is invaluable to our educational experience.”

He said this is the first time he’s had an experience like this outside of work and that it’s something you hope you never have to do. “In a hospital setting during residency, you are protected and surrounded by people that know more than you,” he said. “When you’re out in public and something like this happens, it’s different because you realize you are the one person that has more information and experience than anyone else.”

Dr. Morgan, who went to USA Children’s & Women’s Hospital immediately after Sam’s arrival, said he couldn’t stay away until he knew what was going on.

“It was tough, especially not knowing if he was going to be OK,” he said. “You wonder if you did enough – if you did everything right.”

Dr. Morgan, a parent to three, said he felt like a parent to Sam that day. “I was on edge and wondering what would happen.” he said. “I thought of my own kids and what I would do should anything happen to them.”

“When I was told Sam was doing fine, I was relieved. I felt very good knowing that although his life was going to be very different, he still had a life.”

Dr. Morgan recently visited with Sam and his family. “Sam’s a good kid,” he said. “Being an athlete, his life has changed drastically. He will have to find some things to replace the things he once loved.

There is no doubt in my mind that he has a special purpose to fullfill in this life, but it’s going to be up to him to figure out just what that purpose might be.” 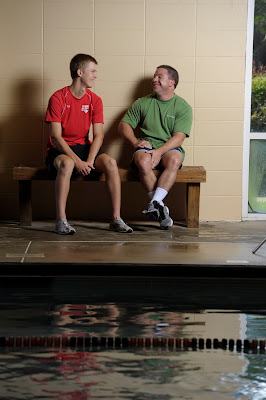 Sam, who had no previous health issues, was diagnosed with arrhythmogenic right ventricular dysplasia (ARVD), a rare form of cardiomyopathy in which the heart muscle of the right ventricle is replaced by fat and/or fibrous tissue.

Patients with ARVD often have arrhythmias, or abnormal heart rhythms, which can increase the risk of sudden cardiac arrest. Sam is currently on drug therapy to control the arrhythmias and has an implantable cardioverter defibrillator (ICD) to continually monitor his heart function.
﻿﻿
Sam’s parents, David and Amy Cockrell, who are both pharmacists within the USA Health System, said they were blessed to have Dr. Morgan at the YMCA that day.

“He made sure that Sam received the best possible care during the six minutes that passed before the paramedics arrived,” Amy said. “Sam’s miraculous outcome is due in large part to Dr. Morgan’s initial quick response.”

“We are fortunate that our community has a College of Medicine that educates and trains so many of the medical community that serve in the Gulf Coast area,” David said. “Dr. Morgan used his medical training and expertise to prevent a tragedy and keep our young son alive and our family together.”

Although Dr. Morgan played a critical role in saving Sam’s life, he’s unsure of his new status as a “hero.” He just believes he was there for a reason that day.

“My gut tells me I was doing what I was supposed to do and what I was trained to do,” he said. “I believe that God was able to work through me to get Sam to a better place, and I find peace and respect in that.”

“As far as being a hero,” he added, “I’ll leave that up to everyone else to decide. My wife and kids think I am a hero, and that’s enough for me.”
Posted by Med School Watercooler at 8:59 AM No comments: