“This was the first trip to Rwanda made by CMMSA or USA students,” said Dr. Peevy, CMMSA adviser. “Some of these same students have been to Honduras at least once on summer trips with CMMSA.”

The group left March 17, the morning after Match Day, and volunteered at Kibogora Hospital. The hospital is roughly a 230 bed self-supported facility that has two operating rooms and wards for internal medicine, pediatrics, surgery, and OBGYN.

“While there, we were able to directly participate in the care and planning for patients,” said Cody Penrod, fourth year USA medical student. “It was a great learning experience not only in tropical medicine but also in the role we play as physicians.”

While in Rwanda, students were able to directly help patients in the area and get hands-on experience.

“A group of students worked with Dr. Albertson, an orthopedic surgeon from Fairhope who has been to Africa many times, assisting him in orthopedic surgery. Students also assisted a trained Congolese general surgeon,” Dr. Peevy said. “Another group rounded on the neonatology unit and general pediatric patients under my general supervision. We examined and managed infants in their NICU and also on their general pediatric ward and in their PICU.”

Many memorable experiences were gained through this trip as students interacted with the doctors at Kibogora Hospital.

“I think the autonomy and responsibility we were given on internal medicine was the most memorable experience,” said Brannon Vines, a fourth-year USA medical student who also attended. “By the third week we had gained the trust and respect of the physicians who work there for us to function as completely independent doctors making our own decisions about how to treat our patients. This was a very welcome and needed boost of confidence here only months away from starting residency.”

By traveling to Rwanda, the group encountered first-hand the lack of funds in this part of the world that’s needed to properly take care of patients.

“Clinically the most memorable experiences were the loss of two infants from respiratory distress and lack of equipment and training who would easily have survived in the U.S. or other developed countries,” Dr. Peevy said. “Those were emotionally difficult for all of us and brought home the blessing we have in this country in the form of equipment, technology, and trained personnel. We also identified two infants with congenital heart disease and had them transferred to Kigali where there were pediatric cardiology services. I don't think either of them would have been recognized or transferred without our team's input.”

This was an inaugural trip to Rwanda for the group and they are already planning for a trip next year.

“We have filled out debriefing forms that allowed us to brainstorm on ways to improve the trip next year,” Penrod said. “The current thinking is to allow it to be an international elective that is available to fourth year students each and every year. If I had known international electives like this were available it would have been a strong draw to the USA College of Medicine when I was applying.”

This trip brought a group of medical students together to have a life-changing experience in their field of study and faith.

“I was amazed at the great attitude of the group; at the cohesive, loving way in which the students treated each other; at the way they could have fun in the midst of a stressful, fatiguing experience; at how hard they were willing to work for individual patients, knowing that if they did not advocate for the patients that the patient would most likely not receive the treatment they needed,” Dr. Peevy said. “This was a group of students committed to Christ and whose behavior reflected that commitment--I was proud to have been associated with them and look forward to seeing their careers develop.”

To learn more about the medical mission trip, view the group's blog at http://teamrwanda2012.blogspot.com/
Posted by Med School Watercooler at 3:52 PM No comments: 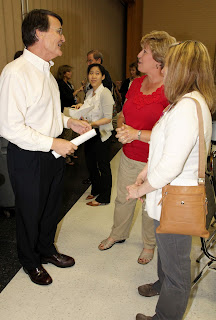 
The lecture, “Evidence-Based Treatments for Autism Spectrum Disorders,” had a total of 86 attendees.
At the lecture, Dr. Swingle lectured on autism spectrum disorders, a group of complex developmental disorders including autism, Asperger’s syndrome and Pervasive Development Disorders – Not Otherwise Specified (PDD-NOS), as well as the local services that are available for people with the condition.

During the talk, Dr. Swingle outlined the disorders, as well as their signs, symptoms and the importance of early diagnosis.

Med School Café is a free community lecture series sponsored by the USA Physicians Group. Each month, faculty from the USA College of Medicine share their expertise on a specific medical condition, providing insight on the latest treatment available. For more information on the lectures, click here. 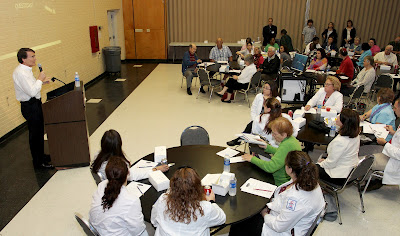 Posted by Med School Watercooler at 3:52 PM No comments:

The University of South Alabama Center of Excellence hosted its 2012 Symposium on April 13, 2012.

The symposium, titled “Community and Academia: Partners for Eliminating Health Disparities and Promoting Equity in Care,” was held at Via! Health, Fitness & Enrichment Center in Mobile.

The symposium provided a forum to foster meaningful dialogue between community members, community agencies and organizations, and USA faculty, staff and students. The dialogue centered on issues of importance to health disparate groups of the Mobile community.

As a community organizer for nearly 20 years, Dr. Minor has worked on community empowerment, non-profit business development, and faith-based initiative issues. He currently serves as the undershepherd of the Oak Hill Baptist Church in Hernando, Miss., and is the national director for health and human services of the National Baptist Convention.

The University of South Alabama Center of Excellence for Health Disparities is a federally funded program to aid institutions which address the inequality of health care within their community and region. To learn more, click here.
Posted by Med School Watercooler at 3:51 PM No comments: 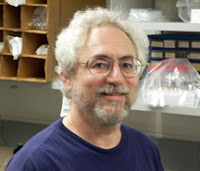 The lecture, titled “A Culture of Noise: An In Vitro approach to the Study of Acoustic Trauma,” will take place Thursday, March 29, 2012, at 4 p.m. in the Medical Sciences Building auditorium on USA’s main campus.

Dr. Green's research interest focuses on the molecular and cellular mechanisms by which neuronal survival, neurite growth, and synaptogenesis are regulated by neural activity or membrane deplorization.

Dr. Green earned his Ph.D. degree from the California Institute of Technology.