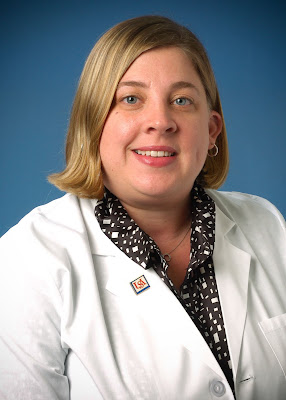 Dr. Druhan L. Howell was recently appointed as assistant professor of pediatrics and internal medicine at the University of South Alabama College of Medicine.
She is a graduate of Emory University in Atlanta, where she received her bachelor of science degree in biology.
Dr. Howell earned her medical degree from the University of South Alabama College of Medicine. She conducted her residency in the combined internal medicine and pediatrics program at USA.
In addition, Dr. Howell completed a fellowship in allergy/immunology at Duke University in Durham, N.C.
Dr. Howell is a member of the American Thoracic Society, American Medical Association, American Academy of Pediatrics, American College of Physicians and the American Academy of Allergy, Asthma, and Immunology. She was also a Fellow-In-Training Regional Representative for the American College of Allergy, Asthma, and Immunology.
Dr. Howell is now accepting adult and pediatric allergy and immunology patients at her clinic at USA Springhill Avenue Campus. To make an appointment, call (251) 405-5147.
Posted by Med School Watercooler at 9:12 AM 1 comment: 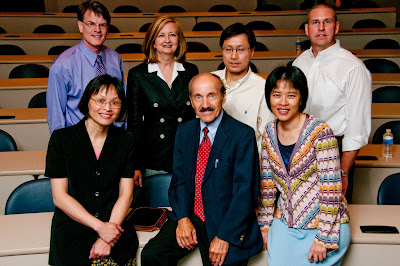 Six accomplished scientists from around the world recently made a trip to Mobile to pay tribute to their former teacher and mentor Dr. Robert N. Lausch (front center), who recently retired as professor of microbiology and immunology at the University of South Alabama College of Medicine. 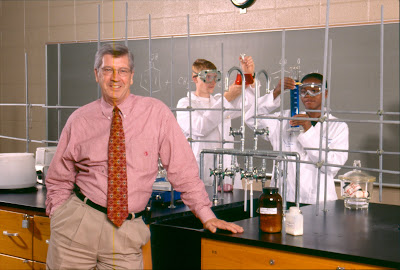 Dr. T. G. Jackson, who was known for his "tough love" when counseling University of South Alabama pre-med students died on Aug. 12th after battling cancer.
Dr. Jackson began teaching at USA a year after the school opened. He taught in the Department of Chemistry for 43 years.

Funeral services will be held at Ashland Place United Methodist Church on Sat. at 10 a.m. Visitation will be held Friday from 5 - 7 p.m. at Radney Funeral Home on Dauphin St.

Follow this link to read article published five years ago in USA Medicine magazine -
www.usahealthsystem.com/tgjackson.pdf .
Posted by Med School Watercooler at 9:22 AM 1 comment: 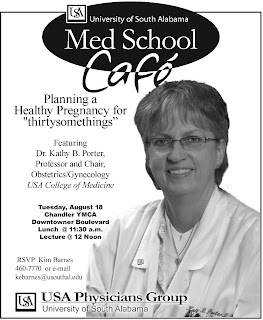 The University of South Alabama Physicians' Group Med School Café lecture series for August will feature Dr. Kathy B. Porter, professor and chair of the department of obstetrics and gynecology at the University of South Alabama College of Medicine. Dr. Porter's lecture, "Planning a Healthy Pregnancy for thirtysomethings," will offer advice on how women in their 30s and beyond can best prepare and plan for a healthy pregnancy.

The lecture will cover the risk factors associated with the advanced maternal age of an expectant mother. Dr. Porter will also discuss ways women can reduce their risks by following proper nutrition and exercise habits. The lecture will include specific information on fetal development and anatomy, chromosomal defects and prenatal testing and diagnosis.

Dr. Porter joined the USA College of Medicine faculty in 2002. She is one of only two board certified high-risk obstetricians in the region.

The Med School Café lecture and lunch are provided free of charge, but reservations are required. For more information regarding the lecture or to make reservations, please call Kim Barnes at (251) 460-7770 or e-mail kebarnes@usouthal.edu.
Posted by Med School Watercooler at 8:48 AM No comments: 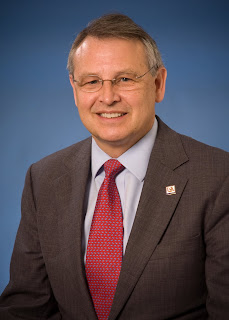 Dr. William O. Richards has been named professor and chair of the department of surgery at the University of South Alabama College of Medicine. Dr. Charles Rodning has served as interim chair for the department since Feb. 2006.

Prior to his appointment at USA, Dr. Richards was Ingram Professor of Surgical Sciences at the Vanderbilt University School of Medicine in Nashville, Tenn., where he was director of both laparoendoscopic surgery and the Vanderbilt Center for Weight Loss.
"Dr. Richards is an accomplished academician with almost 23 years of experience in academic medicine. During his career, he has demonstrated himself as an outstanding teacher, researcher and clinician," said Dr. Samuel J. Strada, dean of the USA College of Medicine.

His research interests include the measurement of magnetic fields to diagnose diseases of the gastrointestinal system. Throughout his career, his research activities have been funded by both the National Institutes of Health and industry. He holds a patent on noninvasive identification of intestinal gangrene using measurements of abnormal electromagnetic electrical rhythms. Recently he has investigated novel surgical procedures for treatment of diabetes including laparoscopic implantation of a gastric electrical stimulator.

In 2006, Dr. Richards was named Ingram Professor of Surgical Sciences at Vanderbilt and served as the President of the Tennessee Chapter of the American College of Surgeons. That same year, he was awarded along with his colleague, Dr. Alan Bradshaw, the Nightingale Prize from the Institute of Physics and Engineering in Medicine. In 2008 he along with the leadership of the Tennessee Chapter of the ACS was instrumental in creating the Tennessee Surgical Quality Consortium which was funded by $2.5 million from Tennessee Blue Cross Foundation. This project created a consortium of 10 hospitals in Tennessee using the National Surgical Quality Improvement Project NSQIP in order to improve surgical care within the State of Tennessee.