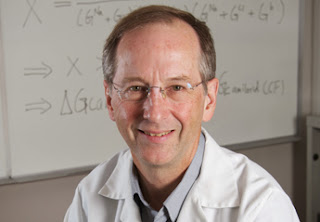 The University of South Alabama College of Medicine’s Charles M. Baugh 2014 Endowed Lecture in Basic Medical Sciences will feature Dr. Michael Welsh, a Howard Hughes Investigator at the University of Iowa and a member of the National Academy of Sciences.

His lecture, titled “The Origins of Cystic Fibrosis Lung Disease,” will take place Nov. 20, 2014, at 4 p.m. in the Medical Sciences Building auditorium on USA’s main campus.

Dr. Welsh’s laboratory focuses on understanding the biology of cystic fibrosis, a common lethal genetic disease. Cystic fibrosis is caused by mutations in a gene that encodes the CFTR chloride channel. Dr. Welsh and his colleagues are learning how the CFTR chloride channel is regulated, how it forms a chloride pore in the cell membrane, and how mutations disrupt its function. His lab also focuses on the pathogenesis of cystic fibrosis lung disease, learning how the loss of CFTR causes bacterial airway infections and how bacteria interact with the airway. In addition, Dr. Welsh and his colleagues are developing gene transfer methods to treat cystic fibrosis and other genetic diseases.

The lecture is held in memory of Dr. Charles M. Baugh, who served twice as dean of the USA College of Medicine and as vice president for medical affairs. He began his career at USA in 1973 as a charter member of the medical school faculty and as professor and chair of biochemistry. In 1976, Dr. Baugh was named associate dean for basic medical sciences and served as dean from 1987-1992 and from 1999-2000. In addition, Dr. Baugh was involved in the creation of the USA Health Services Foundation, the South Alabama Medical Sciences Foundation, PrimeHealth, and in the development of USA's biomedical library which bears his name.

Past Baugh Lecturers Have Been: 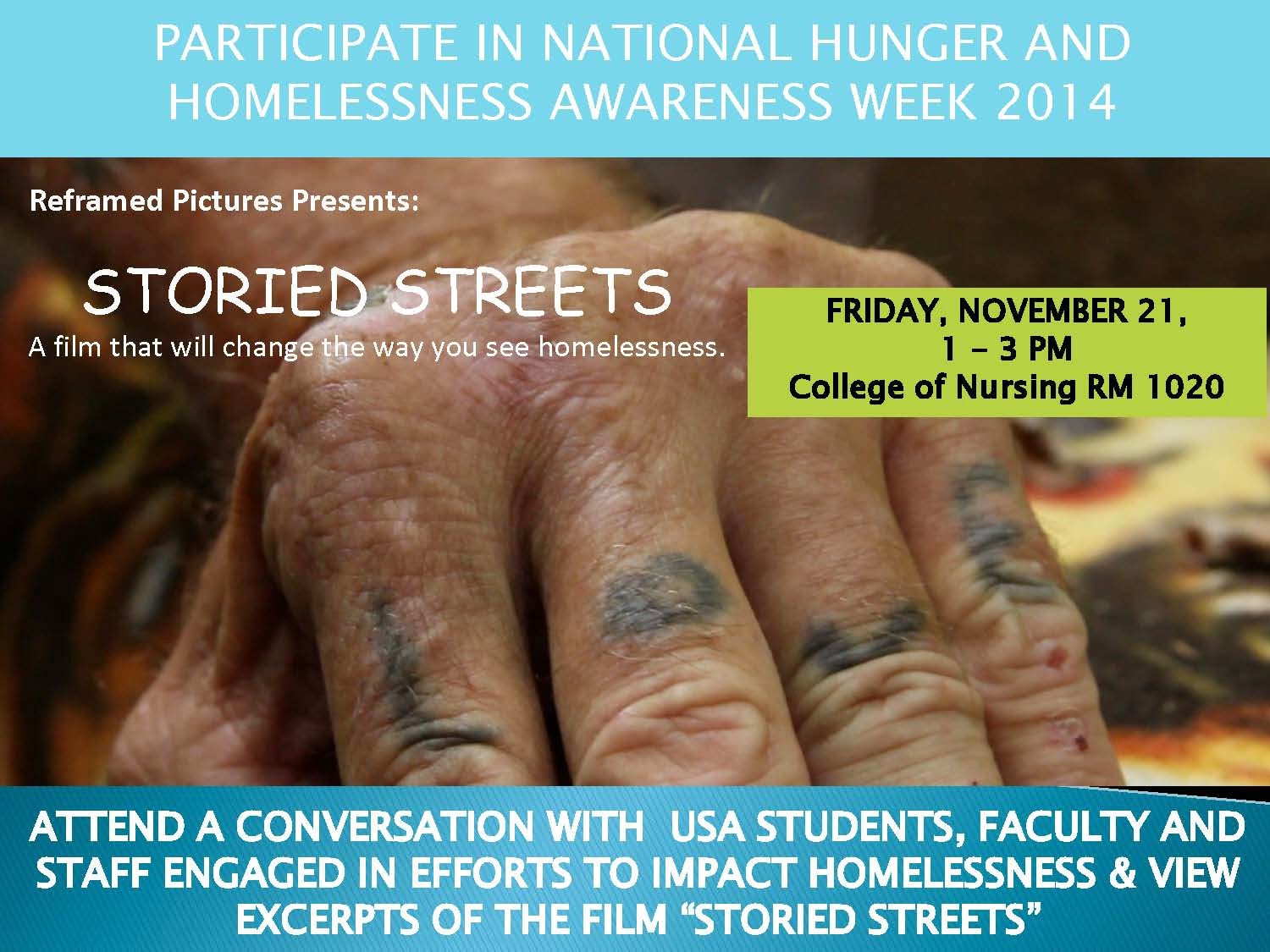 In recognition of National Hunger and Homelessness Awareness Week, the University of South Alabama Health Disparities Research Group (HDRG) and the student-run free clinic at 15 Place have paired up to create an event called “Homelessness in Our Community.” The event will be held on Nov. 21, 2014, from 1 p.m. to 3 p.m. in the Health Sciences Building (Room 1020) on USA’s main campus.

This event is spearheaded by Dr. Kathy Bydalek, assistant professor in the USA College of Nursing. She is a member of the Health Disparities Research Group and a member of the board of directors at 15 Place. During the event, faculty and medical students will present information about their efforts to impact homelessness.

Donations can be dropped off at the Biomedical Library, the USA College of Medicine student affairs office, the simulation office in the Health Sciences Building, and the Mastin Building Student Room Suite 202. If you have any questions, contact USA second-year medical student Emily Spurlin at ees1223@jagmail.southalabama.edu.
Posted by Med School Watercooler at 4:24 PM No comments: 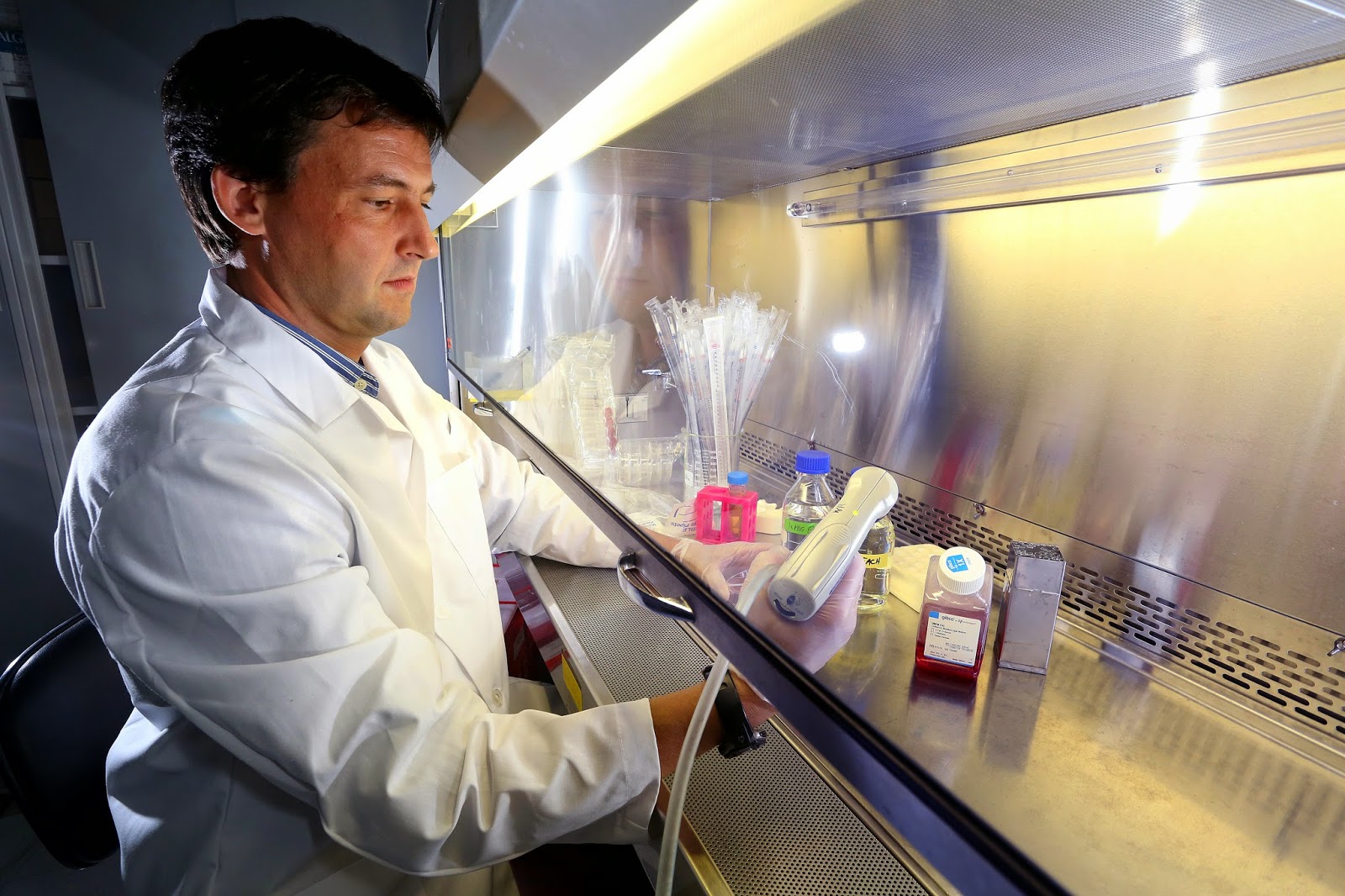 Dr. Wito Richter recently was appointed assistant professor in the department of biochemistry and molecular biology at the University of South Alabama College of Medicine.

Dr. Richter earned his doctorate degree in biochemistry from Leipzig University in Leipzig, Germany, and subsequently joined the lab of Dr. Marco Conti in the department of obstetrics and gynecology at Stanford University for a post-doctoral fellowship.

Before his appointment to USA, he served as assistant adjunct professor in the department of obstetrics, gynecology and reproductive sciences at the University of California San Francisco in San Francisco, Calif.

Dr. Richter’s primary research interest lies in understanding the role of cAMP-phosphodiesterases (PDEs), a large group of isoenzymes that hydrolyze and inactivate the second messenger cAMP, in the temporal and spatial control of cAMP signals. He is particularly interested in probing the physiological and pathophysiological functions of individual PDE subtypes and the therapeutic potential of their activation or inhibition.
Posted by Med School Watercooler at 1:36 PM No comments:

The University of South Alabama Biomedical Library will be hosting the traveling exhibition, Against the Odds: Making a Difference in Global Health, during the month of November.

The exhibition highlights the role of communities in improving health at home and around the world. It also explores the shared basic needs required for a good quality of life, including nutritious food and clean water, a safe place to live, and affordable health care.

Using historical and contemporary photographs, the exhibit banners tell stories of collaboration between families, scientists, advocates, governments, and international organizations, all taking up the challenge to prevent disease and improve medical care.

This exhibition raises awareness of the sources and effects of health inequalities and invites each of us to join the global campaign for health and human rights. The experiences described constitute a legacy of success, often based on the simplest means. Working together, we can make a world of difference.

Click here for more information about the exhibit.
Posted by Med School Watercooler at 1:36 PM No comments:

The USA Physicians Group had a booth at the fair and health care providers - including the departments of internal medicine, orthopaedics, bariatric surgery, cardiology and neurology, as well as the USA Mitchell Cancer Institute - were on hand to answer health questions.

As a reminder, for those covered by USA Health and Dental Plan insurance, co-pays are only $10 per visit with any provider in the USA Physicians Group. To make an appointment with any USA Physician, call (251) 434-3711.

Posted by Med School Watercooler at 1:36 PM No comments: