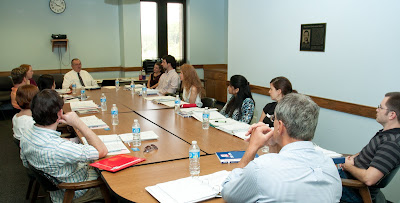 The University of South Alabama College of Medicine held orientation this week for students entering the doctorate program in basic medical sciences. The students will start their first day on Monday.

One student entering the program, Chian Ju Jong, originally from Malaysia, received her undergraduate degree in biology and her master’s degree in environmental toxicology from USA.
Jong said her sister also attended USA. “She told me it was a really great school, and that’s when I decided to come here,” Jong said.

Jong said she has enjoyed her time in Mobile. “I really like the programs USA offers,” she said. “My professors have always been very helpful. When I was earning my undergraduate degree, they always worked with me and helped me to excel and be a critical thinker.”

While studying environmental toxicology, Jong said she became interested in research. “I found out that research is what really interests me, and I realized that it was what I wanted to do more of,” she said.

Kirsten Fondren, a native of Los Angeles, received her bachelor’s degree in social sciences with a minor in biology from Tulane University. Fondren said she has been out of school for five years and is excited to be back.

“I’m really looking forward to getting back into the swing of things and exercising my brain cells again,” she said.

Peter Favreau, from Mobile, Ala., is also a USA graduate who decided to continue his education at USA by entering the doctorate program in basic medical sciences.

“I’m most excited about all of the lab rotations we will have,” he said. “There are so many different types of science, and I’m looking forward to learning more about each of them.”

“This entire experience is a really great opportunity,” Favreau said, “and I’m definitely excited about it.”
Posted by Med School Watercooler at 11:37 AM No comments: 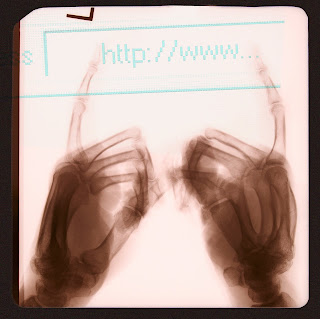 The following is the second of a three-part series sharing your top picks for online resources. To read the first post, click here.

Dr. Albert Pearsall, professor of orthopaedics, frequently visits the American Academy of Orthopaedic Surgeons, the American Orthopaedic Society for Sports Medicine, the Arthroscopy Association of North America and the Journal of Bone and Joint Surgery. He also uses VuMedi, a video sharing website where you can view, upload, and discuss surgical videos.

Dr. William Broughton, professor of internal medicine, gets his data from http://www.chestnet.org/accp/chest-journal, http://www.thoracic.org/ and http://www.journalsleep.org/. For educational material pertaining to general education, he reads http://www.aldaily.com/, a site dedicated to the three best articles, book reviews and essays of the day. For news on science and computer development he visits http://slashdot.org/, self-described as “News for Nerds” that is informative, entertaining and up-to-date.

Stay tuned -- next week we'll continue to share more.
Posted by Med School Watercooler at 10:52 AM No comments: 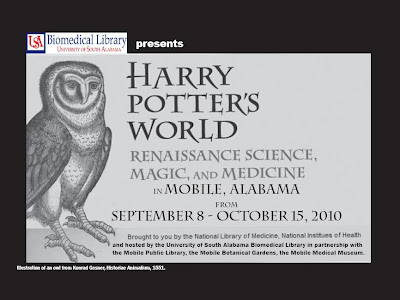 The University of South Alabama Biomedical Library is pleased to announce that "Harry Potter’s World: Renaissance, Science, Magic, and Medicine," an exhibition developed and produced by the Exhibition Program at the National Library of Medicine, will be coming to Mobile, Ala., this fall.

From Sept. 7 through Oct. 16, 2010, the exhibit will be hosted at USA’s Baugh Biomedical Library on the USA campus and at other locations in the Mobile area. The exhibit is free and open to the public.

In 1997, British author J. K. Rowling introduced the world to Harry Potter and a literary phenomenon was born. Although a fantasy story, the magic in the Harry Potter books is partially based on Renaissance traditions that played an important role in the development of Western science, including alchemy, astrology and natural philosophy.

Incorporating the work of several 15th and 16th century thinkers, the seven-part exhibit series examines important ethical topics such as the desire for knowledge, the effects of prejudice, and the responsibility that comes with power. This exhibition, using materials from the National Library of Medicine, explores Harry Potter’s world, its roots in Renaissance science, and the ethical questions that affected not only the wizards of Harry Potter, but also the historical thinkers featured in the series.

To further enhance the physical exhibit, the USA Biomedical Library will host the program “Magic, Alchemy, and Medicine in Harry Potter’s World” presented by Dr. Elizabeth Lane Furdell, professor of history at the University of North Florida on Sept. 15, 2010, at 4 p.m. The event will be preceded by a 3 p.m. reception with refreshments in the USA College of Medicine Conference Room.

Dr. Furdell’s presentation brings to light the contentious transition that kings, physicians, charlatans and alchemists found themselves in during the English Renaissance as they tried to discover the secrets of life while maintaining their own roles in society. Her content is suitable for Harry Potter fans of all ages and is free and open to the community at large.

"Harry Potter’s World: Renaissance, Science, Magic, and Medicine" will move to the Mobile Botanical Gardens for the Gulf Coast Herb Society’s Herb Days Sept. 17-19, 2010; to the West Regional Branch of the Mobile Public Library from Sept. 20-30, 2010; and to the Mobile Medical Museum Oct. 4–14, 2010, where the exhibit will be enhanced by the museum’s special collection of rare books and a special exhibit, “Nature’s Pharmacy” - a collection of some of the very roots and bottled remedies found in the Harry Potter books.

Dr. Frank S. Pettyjohn, professor of medicine and professor and chair of emergency medicine at the University of South Alabama College of the Medicine, was the first recipient of the John Ernsting Award. The award was presented to Dr. Pettyjohn at the Honors Ceremony of the Aerospace Medicine Association’s Annual Scientific Meeting on May 13, 2010, in Phoenix.

A native of Delaware, he graduated from the University of Delaware with a bachelor of science degree in civil engineering and entered the U.S. Army as a 2nd Lt. in the Corps of Engineers serving in Korea. Following his return, he received his medical degree from Hahnemann University School of Medicine in Philadelphia.

Dr. Pettyjohn served in Vietnam as a flight surgeon for the 17th Combat Aviation Group in 1966. On his return, he completed his internal medicine residency and cardiology fellowship at Madigan Army Medical Center in Fort Lewis, Wash.

Dr. Pettyjohn completed a post-doctoral fellowship in public health/preventive medicine at the University of Washington in Seattle. He also completed a residency in Aerospace Medicine at Brooks Air Force Base in San Antonio. He served as cardiologist and flight surgeon for Operation Homecoming to return Vietnam POWs to the United States in 1973.

He joined the U.S. Army Aeromedical Research Laboratory at Fort Rucker, Ala., conducting research in the fields of aeromedical evacuation, oxygen systems, trauma and altitude physiology. He continued his research at the Naval Aeromedical Research Laboratory in Pensacola, Fla. Upon leaving military service, he joined the USA College of Medicine as professor and chairman of the department of emergency medicine in 1989.

Dr. Pettyjohn was recalled to the U.S. Army in 1991 as a cardiologist and aviation medicine consultant at the U.S. Army Aeromedical Center during Operation Desert Shield/Desert Storm. He served as a member of the aeromedical team that returned the US POWs from Desert Storm to the United States. In December 2008, he again returned to active duty in the U.S. Army as a flight surgeon and cardiologist with the 345th Combat Support Hospital in Tikrit, Iraq.

He is board certified in internal medicine, cardiovascular disease, preventive medicine (aerospace medicine) and emergency medicine. He is recognized internationally as an expert in aviation and space medicine and served as president of the International Academy of Aviation and Space Medicine from 2005 to 2007. Dr. Pettyjohn continues his research career in the fields of clinical medicine conducting trails of anti hypertensive medications, cholesterol treatment, and combined hypertension and diabetes management.

The John Ernsting Award recognizes the scientific contributions of Professor John Ernsting, MBBS, Ph.D., CB, OBE as the world expert in altitude physiology and aircrew protection. The award was established by the Aerospace Medical Association and sponsored by Environmental Tectonics Corporation to recognize the legacy of Professor Ernsting.
Posted by Med School Watercooler at 8:55 AM 1 comment: