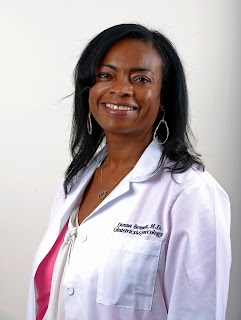 Dr. Donna C. Bennett was recently appointed assistant professor of obstetrics and gynecology at the University of South Alabama College of Medicine.

Prior to her appointment to USA, Dr. Bennett was in private practice at Monroeville Medical Center in Monroeville, Ala.

Dr. Bennett earned a bachelor’s degree in biology from Montclair State College in Upper Montclair, N.J. She earned her medical degree from Robert Wood Johnson Medical Center in Piscataway, N.J., and completed her residency in obstetrics and gynecology at Jersey Shore Medical Center in Neptune, N.J. 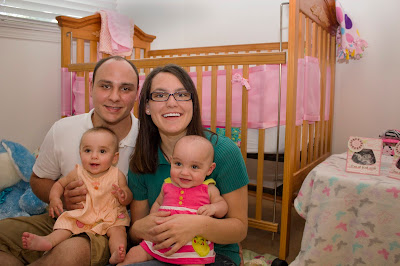 Jessica Franklin was six weeks pregnant when an ultrasound revealed that she was expecting not one, but two babies. Jessica, along with the twins’ father Zach Staehling, began the preparations that all expecting parents go through - times two.

Amid the joy of preparing for the arrival of their twins, the Biloxi, Miss. couple received news that completely turned their world upside down. At 34 weeks, near the end of Jessica’s pregnancy, an ultrasound revealed that one of the babies had a serious malformation in her brain.

“They found a little spot on the ultrasound, and I was sent for further evaluation,” said Franklin. “One week later the diagnosis was made, and I had an emergency C-section at Children’s and Women’s in Mobile.”

On Oct. 10, 2012, at 35 weeks, Carley and Chloe Staehling were delivered at the University of South Alabama Children’s and Women’s Hospital. Carley, as detected in the ultrasound, was born with a vein of Galen arterial malformation in her brain that doctors warned, if left untreated, could lead to multiple organ failure, severe developmental disabilities, seizures or even death.

Five months later, at USA Medical Center, Dr. Steve Cordina, an interventional neurologist with USA Physicians Group, performed the first of what would be three corrective procedures in which he embolized the blood vessels feeding the malformation in Carley’s brain.

“This diagnosis is typically devastating for the baby,” explained Dr. Cordina, who is also assistant professor of neurology at the USA College of Medicine. “The malformation in Carley was taking a lot of blood. Even after her procedures in February and May, the malformation was still active.”

“After reading more about her condition, we were absolutely terrified,” said Staehling. “But from the start, Dr. Cordina was confident that he could help Carley with the new procedure. We saw his confidence, which made Jessica and I feel more secure as parents.”

During Carley’s most recent procedure this month, at the USA Medical Center, Dr. Cordina and his team were able to successfully stop the blood flow from six blood vessels feeding into the malformation.

“The post-surgery MRI showed that the blood flow to the site had significantly decreased and that the malformation had clotted off which is essentially a cure,” said Dr. Cordina.  “Carley should continue to develop completely normally, just like her twin sister.”

“Words just can’t describe how we felt,” said Staehling. “That was the best moment of my life. We can never thank Dr. Cordina enough for what he has done for our family.”

The surgery performed by Dr. Cordina at USA is unprecedented in the Gulf Coast region. An intervention of this type and magnitude is typically only performed at large specialty centers.

Crediting the successful interventional procedure, Carley’s parents say that with each passing day, Carley has become more of herself and has hit her developmental milestones along with her twin sister, Chloe.

“Carley’s our little smiler,” said a grateful Staehling. “Throughout this whole thing, she has been smiling and laughing and has been as playful as can be.”

After nine strenuous months, Jessica and Zach say they are now simply just “thanking God and thanking Dr. Cordina” for their healthy, smiling little girl that they are proudly calling their “miracle baby.”
Posted by Med School Watercooler at 8:07 AM No comments: 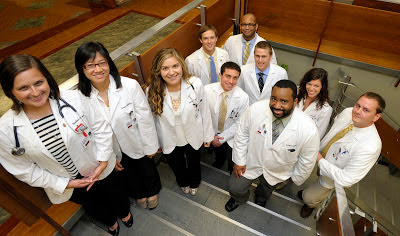 
The University of South Alabama College of Medicine recently held clerkship orientation for third-year medical students. Orientation week served as the introduction to the students’ clinical years and included briefings on topics ranging from hospital security to mini board exams.

After two years of studying medicine through lectures and books, the students will make the transition from classroom to clinical to gain practical patient experience, a practice that changed with the introduction of a new curriculum in 2012.

Beginning with the class of 2016, students who enter the USA College of Medicine receive instruction in all competencies from the beginning of their educational experience.  Milestones of achievement toward competency will be assessed and documented throughout the four-year continuum leading to graduation.

The class of 2015 is the last class to matriculate through the College of Medicine with training segmented into basic science and clinical years.

“Over these first two years of medical school, we have built a solid foundation of medical knowledge,” said third-year USA medical student JaneMarie Freeman, of Huntsville, Ala. “These next two years in the clinics will focus on honing the skills that we need to actually implement that knowledge.”

“While it is an exciting time, it also gives us a very real sense of responsibility and a whole new set of expectations,” said Freeman. “We are halfway to becoming doctors, and we have so much to learn.”

Despite the nerves associated with starting clinical patient care for the first time, the third-year medical students agree that this milestone is one they have anticipated for years.

“I didn’t know what I wanted to do when I first started law school, but it didn’t take long to figure out that my passion was medicine,” said Bumpus. “I graduated from law school and practiced family law in Birmingham for a couple years before coming to medical school.”

Bumpus, whose first clinical rotation is in surgery, is looking forward to interacting with patients, which is the reason he chose to study medicine. “Over the past two years, we’ve learned a broad survey of the underlying theories of medicine, but I’m very happy about actually taking that knowledge into the clinics,” he said.

Audrey Paulzak, a third-year USA medical student also starting in surgery, says that even though she and her classmates are leaving the classroom environment, they realize they will be learning even more in the next two years.

“We are moving from a very rigid study environment to an environment where literally anyone in the building has a lesson from which we can learn,” she explained.  “We will learn about surgery, physical exam techniques and medicine dosage from doctors, but we will also learn from our patients.”

Paulzak says that even with all of the “book knowledge” the students have accumulated over the past two years, the guidance of the doctors, nurses and medical support staff is crucial to their clinical experience.

“Third year is an amazing opportunity to foster my clinical skills and to learn from the titans in their field,” said Paulzak. “I can't believe the day has finally arrived.”