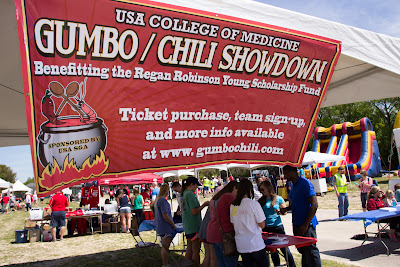 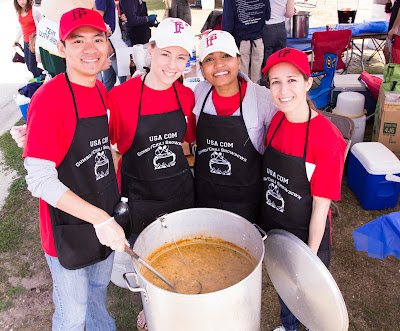 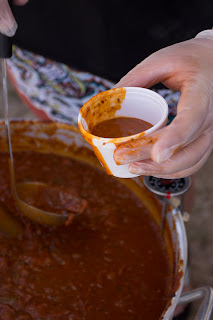 More than 500 people came to the event to enjoy gumbo and chili prepared by 17 competing teams. Winners of this year's event were:

Best Overall: "Bad Chili, Ain't Got Time for That" by the USA College of Medicine Class of 2014 - sponsored by Mobile Diagnostic Center

Best Chili: "Chili in Your Belly, South in Your Mouth" by the USA Alumni Association

The Gumbo Chili Showdown supports a scholarship at the USA College of Medicine created in memory of Regan Robinson, a medical student at USA who was diagnosed with advanced colon cancer in 2003 at the age of 23. The scholarship provides assistance to a rising senior medical student who embodies Regan’s spirit and character.

Click here to view more photos from the event. For local news coverage of the event, click here. 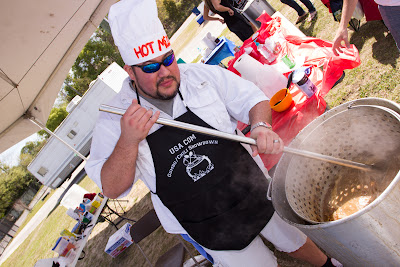 Posted by Med School Watercooler at 12:53 PM No comments: 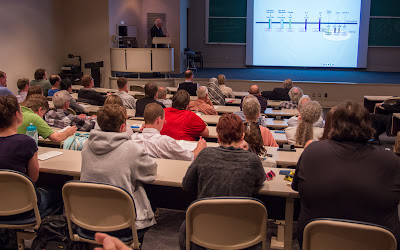 The University of South Alabama College of Medicine hosted the Charles M. Baugh 2013 lecture on April 9th. The event featured Sir Philip Cohen, a pioneer in the scientific field of protein phosphorylation and cellular signalling.

The lecture is held in memory of Dr. Charles M. Baugh, who served twice as dean of the USA College of Medicine and vice president for medical affairs.

The University of South Alabama Department of Orthopaedic Surgery will host its 24th annual Southeastern Orthopaedic Foot Club conference May 16, 2013, from 7 a.m. to 1 p.m. at the Grand Hotel in Point Clear, Ala.

The conference, held in conjunction with the Alabama Orthopaedic Society Meeting, will feature Dr. Lew Schon, director of foot and ankle services at Union Memorial Hospital in Baltimore, Md.

Dr. Schon will lecture on “Advances in Treating the Achilles and Posterior Tibial Tendon Disorders” and “Ankle Reconstructions Via a Lateral Approach: Autograft, Allograft and Arthroplasty.”

At the conclusion of the conference, participants should be able to utilize procedural and ambulatory care for the disorders of the foot and ankle; recognize and incorporate therapeutic options for clinical problems of the foot and ankle; and apply these new diagnostic and treatment modalities and technical knowledge in the treatment of children and adults with foot and ankle abnormalities, as well as the highly trained athlete.

CEU’s will be available. Deadline for registration is May 3, 2013. To register, click here.

For more information, call (251) 665-8250 or click here. You can also get conference updates on Facebook here.
Posted by Med School Watercooler at 10:53 AM No comments: 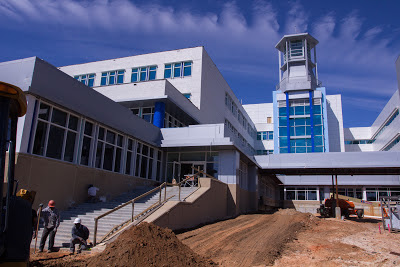 The University of South Alabama Children’s & Women’s Hospital is nearing the final stages of a five-level expansion that will nearly double the hospital’s size.

The $72.6 million expansion will address patient care needs as well as enhance services provided for families, visitors and hospital staff.

Hospital administrator Owen Bailey said Phase I construction is in the final phase and should be completed by this summer.

According to Bailey, the expansion features more space for the hospital’s neonatal and pediatric intensive care units, additional operating rooms and large patient rooms to better accommodate visitors and families. Vital support services such as a large cafeteria and kitchen, along with space for professional teaching and community education, are also included in the expansion.

Highlights of Phase I of the expansion include:

• Surgical Services will relocate and increase from 11,000 to 41,000 square feet and Surgical Recovery will grow from five to 15 beds
• New five-room Epilepsy Monitoring Unit
• New third floor will include an infant unit and a toddler/preschool unit
• New fourth floor will include a school-age/adolescent unit and a hematology/oncology unit
• Pharmacy will relocate and expand from 2,300 to 3,700 square feet


﻿
Additional highlights of the expansion include a new Class Act Room. Class Act is a K-12 program staffed by Mobile County Public Schools teachers that enables children to continue their education while hospitalized.


In addition, the hospital's expansion will house two Ronald McDonald Family Rooms, an extension of Ronald McDonald House Charities of Mobile. The Family Rooms will be located on the third and fourth floors of the new hospital tower and will give families a break from the hospital environment while remaining merely steps away from their child's bedside.

Each Family Room is equipped with a kitchenette, comfortable furniture, a television, private restroom, shower, laundry facilities, and internet connection.

According to Bailey, Phase II of the hospital's expansion is a smaller, but visible phase that will go into 2014. Phase II includes demolishing the old kitchen and dining room, building a new gift shop, renovating the existing lobby, and creating the courtyard space between the two patient towers.

For updates on activities at USA Children's & Women's Hospital, visit the hospital's Facebook page here.
Posted by Med School Watercooler at 9:26 AM No comments: