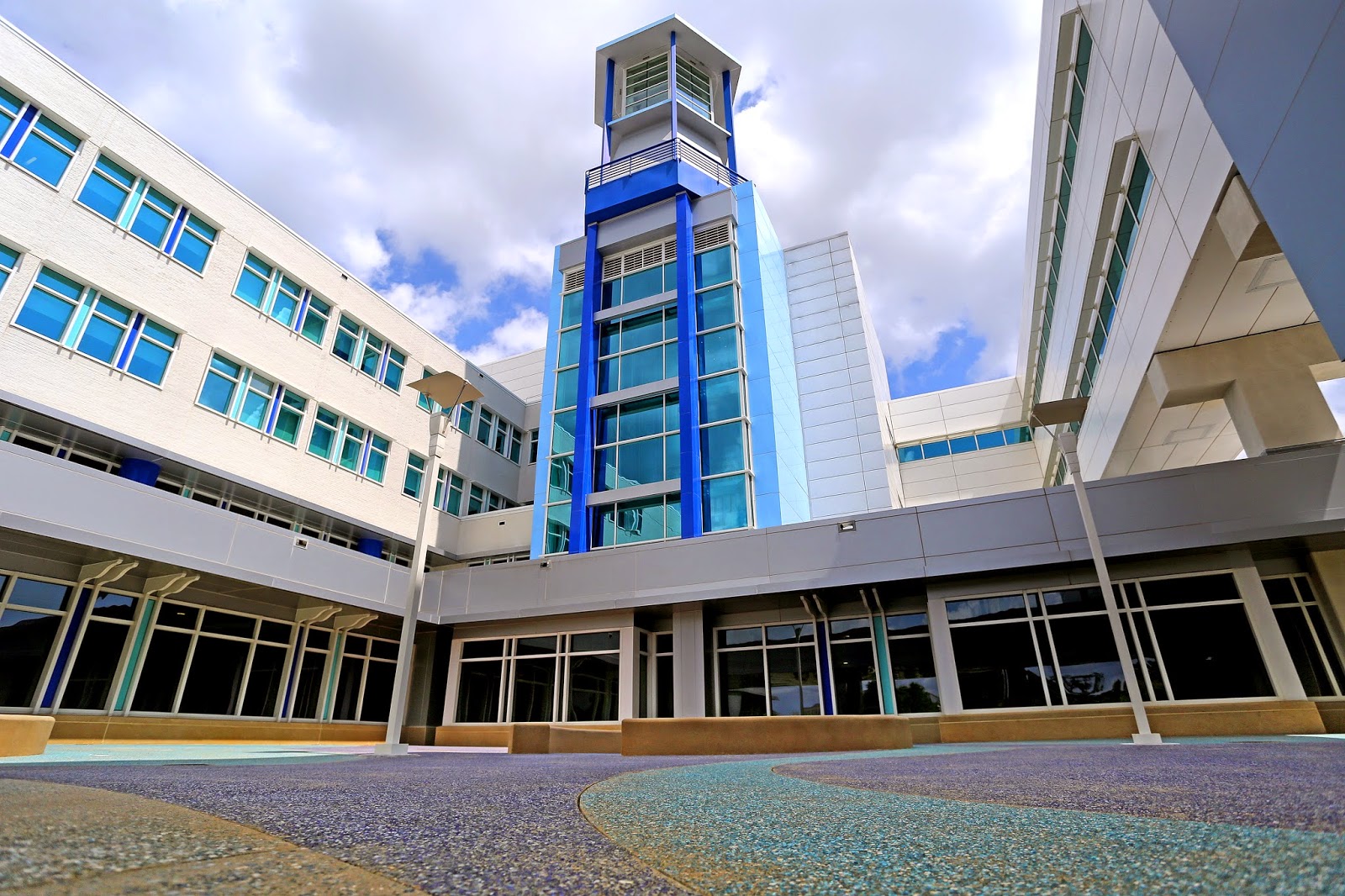 The University of South Alabama Children's & Women's Hospital will host a grand opening for its new courtyard, lobby and gift shop on Aug. 28, 2014, from 4-6 p.m.

"The new lobby and courtyard at USA Children's & Women's Hospital were designed to be places of welcome and relaxation for our patients, their families and our community," said Owen Bailey, hospital administrator. "We have lots of local art work, and even a piano, in these areas to enhance the welcoming atmosphere of our hospital. We are also proud of our new, beautiful gift shop, and the many volunteers who work there. Volunteers make a tremendous difference in our hospital. We are proud to serve the healthcare needs of the children and women of our region, and we welcome the community to come see these wonderful new spaces."

At the event, guests can enjoy refreshments while viewing the latest additions to the facility and will hear from families whose lives have been touched by the hospital.

Click here to learn more about the event and to RSVP.
Posted by Med School Watercooler at 8:45 AM No comments: 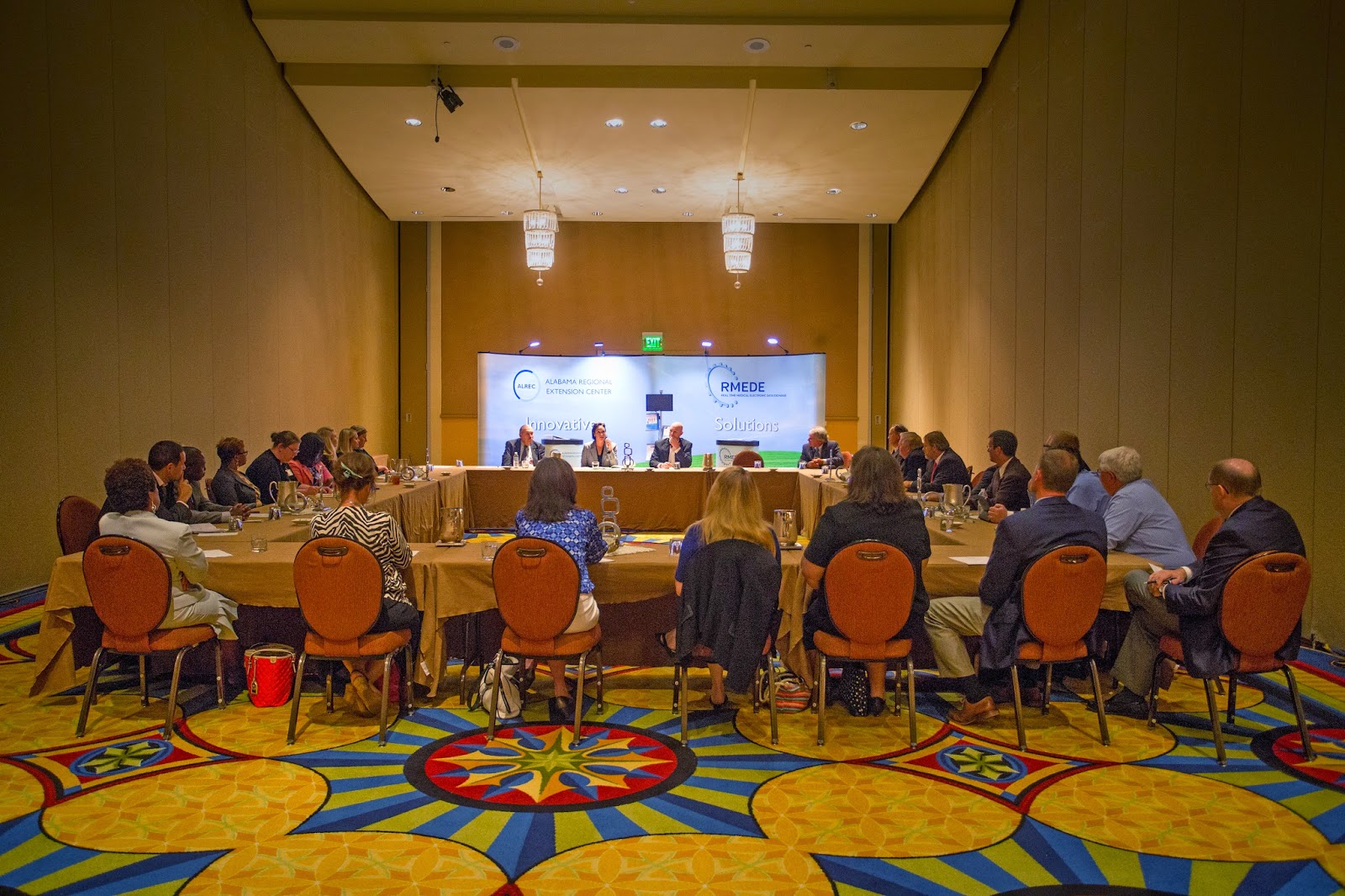 A high-ranking official from the U.S. Department of Health and Human Services came to Mobile in July with a mission - to listen and learn.

Dr. Karen DeSalvo from the Office of the National Coordinator for Health Information Technology (ONC), was in town for a session that drew 50 attendees to the Battle House Hotel on July 22.  It was an informal discussion with Alabama stakeholders regarding the current and future outlook of Health IT on a local and national level.

As national coordinator of the ONC, Dr. DeSalvo is leading the nation’s charge to promote, adopt, and meaningfully use health information technology.  In particular, Dr. DeSalvo hopes to utilize electronic health records (EHR), in order to achieve better care, lower costs in health care and improve the overall health of everyone in America.

Dr. DeSalvo visited Mobile because of the ONC-funded Alabama Regional Extension Center (ALREC), a state-wide program through the USA Center for Strategic Health Innovation.  ALREC is the only center in the state of Alabama, and one of only 62 in the United States.  These centers facilitate provider transitions to electronic health record systems.

“Through the REC program, the ONC has taken a boots on the ground approach,” says Dr. Dan Roach, director of the USA Center for Strategic Health Innovation and ALREC. “The ALREC team members sit literally 'at the elbow' of the providers and their staff to assist them through the transition from paper to electronic health record systems.”

While ALREC has already helped more than 1,800 physicians transition to EHRs, the barriers identified at the meeting included high cost to implement an EHR, workflow challenges, and interoperability issues.  General resistance to change was also cited as an obstacle.

Dr. DeSalvo and her team are gathering feedback with the eventual goal of creating a nationwide interoperability roadmap so EHRs can eventually talk to each other and allow information to follow a patient wherever they go.

“We were honored to have an audience with Dr. DeSalvo,” says Dr. Roach. “This is evidence of the ONC’s commitment to the future of Health IT.”
Posted by Med School Watercooler at 3:32 PM No comments: 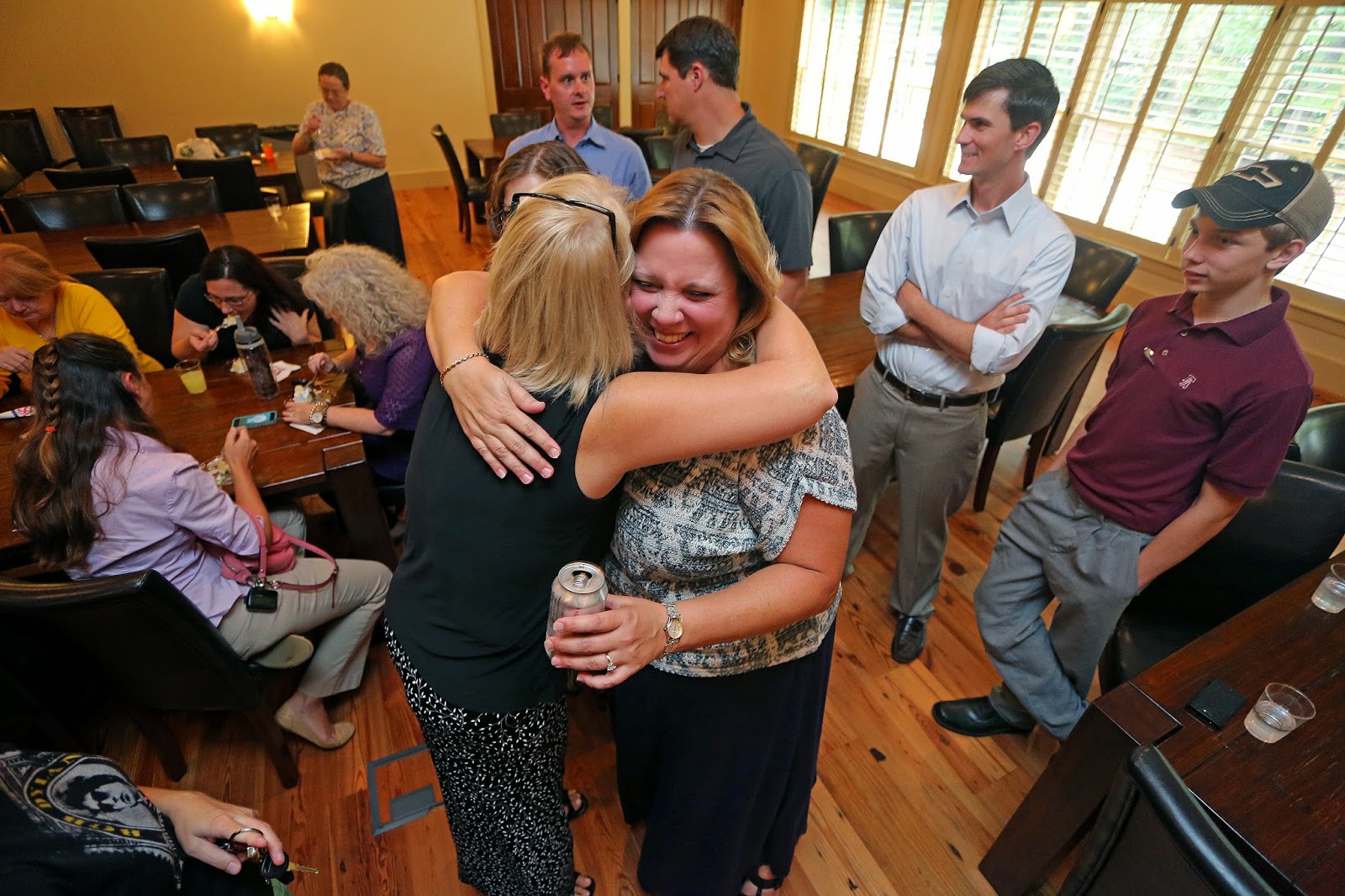 The University of South Alabama College of Medicine recently held a retirement reception honoring Rhonda Bridges Smith, associate registrar in the office  of student affairs, for approximately 32 years of outstanding service to the University. The reception was held Aug. 14, 2014, at the USA Faculty Club.

Smith joined the University in 1982, working with the Academic Opportunity Program, now called Developmental Studies. “My time there and the people I worked with are what instilled my passion for working with students,” Smith said. Her career also included service to the College of Nursing and the College of Allied Health Professions before she joined the College of Medicine in 1999 as an academic records specialist. During her years of service in the College of Medicine, Rhonda took on many additional responsibilities including coordinating signature events such as freshman orientation and convocation.

“We are grateful for Rhonda’s many contributions to the office of student affairs,” said Dr. Susan LeDoux, associate dean of medical education and student affairs. “She will certainly be missed. We wish her well in her retirement.”
Posted by Med School Watercooler at 4:26 PM No comments: 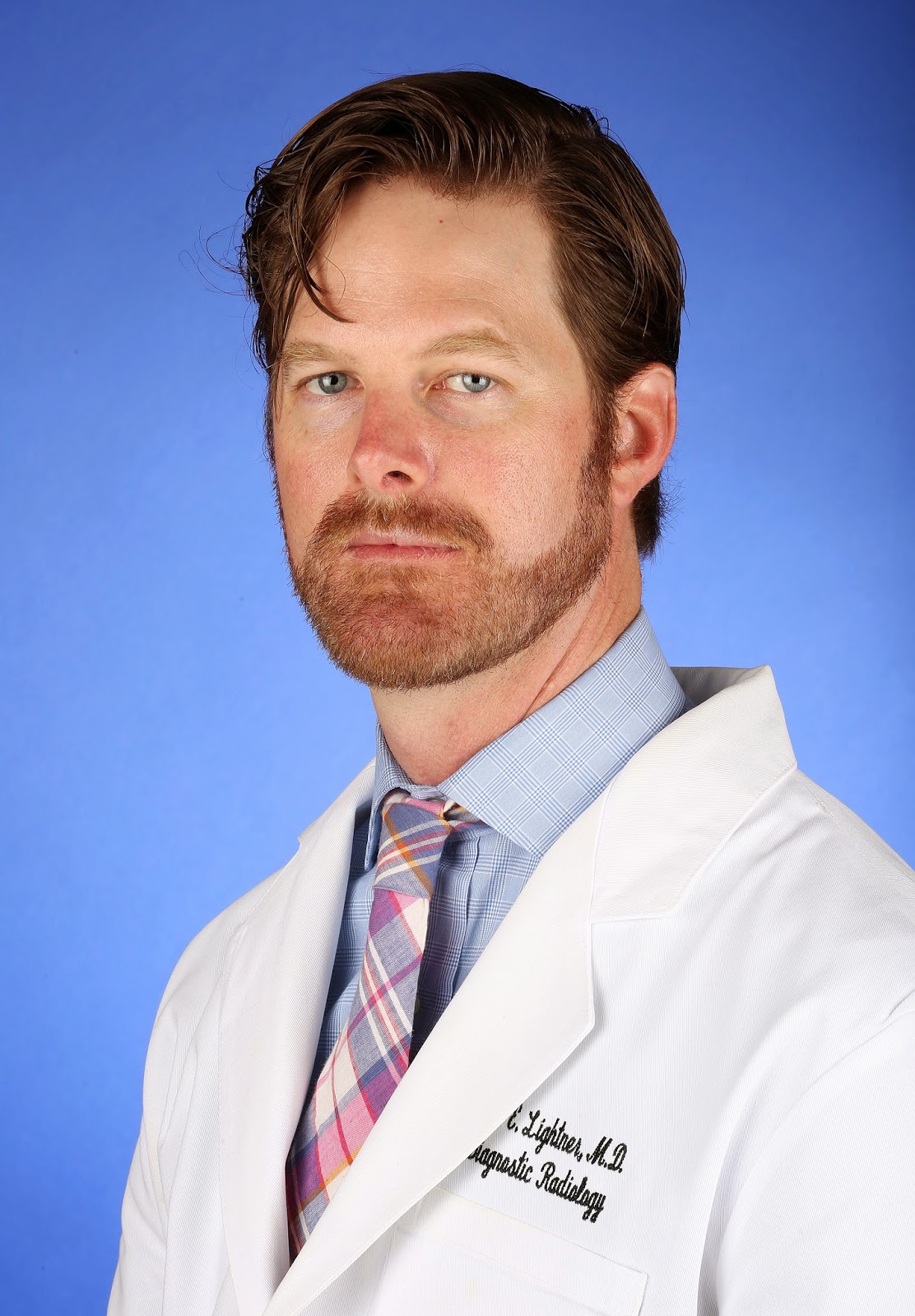 Dr. Joel Lightner Jr. was recently appointed assistant professor of radiology at the University of South Alabama College of Medicine and will serve as a radiologist specializing in mammography at the Imaging Center at USA Children’s & Women’s Hospital.

Dr. Lightner earned his medical degree from Mercer University School of Medicine in Macon, Ga. He completed an internship in internal medicine at Tulane School of Medicine in New Orleans and a residency in diagnostic radiology at the University of Vermont in Burlington, Vt. In addition, he conducted a fellowship in breast imaging at Virginia Commonwealth University in Richmond, Va.

He is a member of the Radiological Society of North American and the Society of Breast Imagers.

At the University of South Alabama Children’s & Women’s Hospital Imaging Center, women who visit for mammography screenings receive test results before they leave the hospital.

For more information or to schedule a mammogram, call your primary care provider or OB-GYN. You can also call the USA Children’s & Women’s Hospital Imaging Center at (251) 415-1660.
Posted by Med School Watercooler at 12:13 PM No comments:

The August Med School Café lecture on Aug. 28, 2014, has been relocated to the John Counts Room in the University of South Alabama Mitchell Center on USA's main campus. We apologize for any inconvenience this may have caused.

Parking will be available in the South lot (Old Shell Road entrance) of the USA Mitchell Center. For directions, click here.

Posted by Med School Watercooler at 9:28 AM No comments: