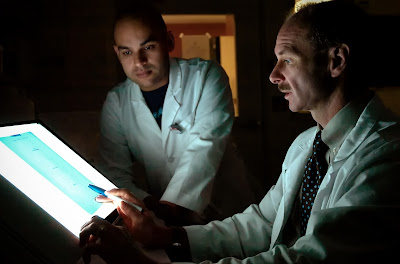 Pulmonary researcher Dr. Troy Stevens (right) is flanked by Cristhiaan Ochoa (left), a USA basic medical sciences graduate student in one of the labs at the USA Center for Lung Biology. In this lab, which is supported by competitive grants from the National Institutes of Health, Dr. Stevens is searching for better treatments for patients suffering from pulmonary edema.

Dr. Troy Stevens, director of the University of South Alabama Center for Lung Biology, was recently awarded a Method to Extend Research in Time (MERIT) award by the National Institutes of Health, and in the process joined an elite group of biomedical scientists whose research is deemed distinctively superior and holds great promise for continued advancement and accomplishments in research.

MERIT awards are among the most selective grants awarded by NIH. Only a small number of NIH-funded investigators are chosen to receive MERIT awards. Dr. Stevens’ research has been funded consecutively by NIH for the past 15 years. MERIT awards typically are funded for up to 10 years, which could extend his research funding from the NIH’s National Heart, Blood and Lung Institute through 2021.

Dr. Stevens’ research interests focus on diseases of the lung vasculature, including acute respiratory distress syndrome (ARDS) and chronic obstructive pulmonary disease (COPD). In this project, he is working to better understand the molecular make-up and function of a calcium channel commonly associated with pulmonary edema, an abnormal accumulation of fluid in the lungs that makes breathing difficult, and is life-threatening. Pulmonary edema is a serious complication that occurs with prevalent illnesses such as heart failure, lung infections and pneumonia. Mortality rates from edema in the lungs can be as high as 40 percent.

“We are interested in better understanding a complex chain of events that take place when patients suffer from pulmonary edema,” explained Dr. Stevens, who also serves as professor of pharmacology and internal medicine at the USA College of Medicine. “Our efforts are focused on ultimately identifying novel molecular targets for drug development, to prevent edema from forming and to limit its severity once the process has been initiated.”

Throughout the University’s history, Dr. Stevens is one of only five USA researchers selected for a MERIT award. Previous awardees are: Dr. David Wood, professor and chair of microbiology; and retired medical school professors Drs. Marcel Conrad, Aubrey Taylor, and Herbert Winkler.

“We congratulate Dr. Stevens for this distinct honor recognizing the quality of his research and the significant potential of his work to improve the lives of those who suffer from lung diseases and injuries,” said Dr. Samuel J. Strada, dean of the USA College of Medicine.

Beyond the benefit of increasing the understanding and treatment of pulmonary diseases, NIH research funding also enhances USA’s mission in training scientists. According to Dr. Stevens, four current medical school faculty members - three at USA and one at the University of Alabama at Birmingham - and a senior National Institutes of Health scientist were supported by this NIH grant while training in his lab.

The USA Center for Lung Biology (CLB) was created in 2002 to improve the understanding and treatment of pulmonary diseases as well as support the training of both scientists and physicians interested in pulmonary medicine. The Center is comprised of 35 faculty members from various backgrounds with a common interest in pulmonary research and care. Since 2002, NIH has continuously funded faculty in the Center. The CLB garners more than $7.5 million annually for its research activities, mostly from NIH.
Posted by Med School Watercooler at 3:50 PM No comments: 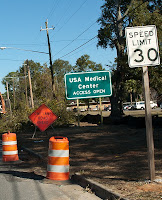 The Alabama Department of Transportation has begun a project to widen Mobile Street to three lanes and is adding curbing and gutters. The project, which will cause some detours in January, will offer improved access to the University of South Alabama Medical Center and the surrounding community.
Beginning Jan. 4, 2011, Mobile Street will be closed to through traffic. Signs will direct Mobile Street traffic to Bay Shore Avenue to Cotton Street to Mobile Street north of the intersection of Fillingim Street and to Fillingim Street. This complete closure is expected to last three months.
After this three-month closure, Mobile Street will re-open as a one-way street with the only traffic going north. South-bound traffic will be detoured to Cotton Street to Bay Shore Avenue to Springhill Avenue. This segment of the project is expected to be completed by September.
Please relay this information to all faculty, staff, patients and visitors. The Alabama Department of Transportation will provide updates as they become available.
Click on the image below to view the detour. 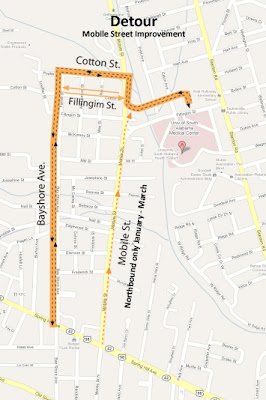 Posted by Med School Watercooler at 3:48 PM No comments:

Dr. Shankey received his Ph.D. degree in immunology and medical microbiology from the University of Florida School of Medicine in 1977 and was a postdoctoral fellow at the University of Pennsylvania from 1977 to 1981.

Before joining the Advanced Technology Center/Systems Research Group at Beckman-Coulter in 2001, he was the director of research for the urology department and scientific director of the Clinical Flow Cytometry laboratory at Loyola University Medical Center near Chicago. 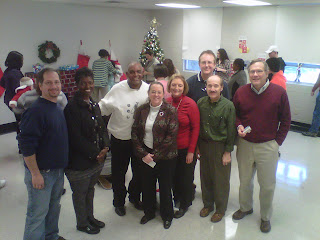 The annual Christmas party for the Alabama Institute for Deaf and Blind, sponsored by the University of South Alabama Lions Club, was held on Dec. 7, 2010. Members of the USA Lions Club (above) provided a Christmas gala for the children affected by hearing and sight impairments at the institute. Approximately 25-30 children were present. The USA Lions Club was responsible for providing lunch and Christmas gifts for every child.

The USA Lions Club was founded in 1993. Their recent projects include sponsoring diabetic camps, collecting funds for eye research, working with Habitat for Humanity, and collecting school supplies for disadvantaged youth. For more information on the USA Lions Club, contact Tommie Carlisle at tcarlisl@usouthal.edu or Judy Burnham at jburnham@usouthal.edu.
Posted by Med School Watercooler at 3:48 PM No comments:

The next Distinguished Scientist Seminar at the University of South Alabama College of Medicine will be presented by Dr. Nicholas Hill, professor of medicine and chief of the pulmonary critical care and sleep division at Tufts Medical Center in Boston.

Dr. Hill received his medical degree from Dartmouth Medical School in Hanover, N.H., and conducted postgraduate training at Boston University. He is board certified in critical care medicine, internal medicine and pulmonary disease.

For more information on Dr. Hill’s research, click here. For additional information on the lecture, contact Natalie Kent at (251) 461-1548.
Posted by Med School Watercooler at 3:45 PM No comments: