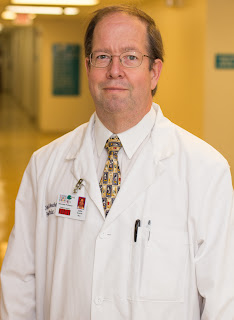 Dr. John Gosche was recently appointed professor of surgery and professor of pediatrics at the University of South Alabama College of Medicine.

Prior to his appointment to USA, Dr. Gosche served as chief professor of pediatric surgery at the University of Nevada School of Medicine, Las Vegas, Nev.

He served as a pediatric surgery resident at Columbus Children’s Hospital in Columbus, Ohio. He also completed a residency and internship in general surgery at the University of Louisville.

Dr. Gosche is a member of the Association for Academic Surgery, American Pediatric Surgical Association and the Society of University Surgeons. He is a fellow for the American College of Surgeons as well as the surgical section of the American Academy of Pediatrics.

He  is board certified in general and pediatric surgery by the American Board of Surgery.

Photos from the visits to USA Hospitals are shown below. 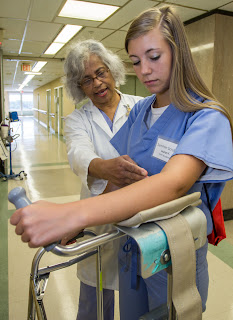 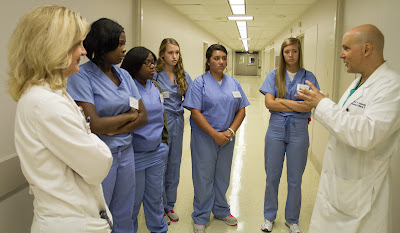 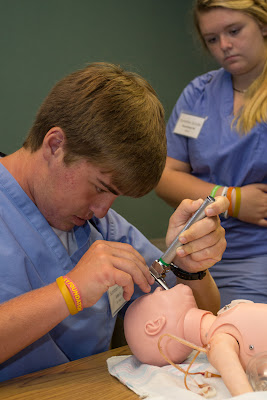 Click here to view all photos.﻿
Posted by Med School Watercooler at 3:11 PM No comments: 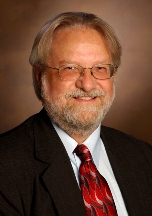 The event will take place August 3, 2012, in the Medical Sciences Building. Oral presentations will begin at 8:30 a.m. and poster presentations will begin at noon. Dr. Robertson's lecture, “The New Paradigm of Genome Research in Human Disease,” will take place at 11 a.m. in the Medical Sciences Building Auditorium.

Dr. Robertson also serves as director of the NIH Autonomic Diseases Clinical Research Consortium, and for the Clinical Research Center and Center for Space Physiology and Medicine at Vanderbilt. He has a B.A. in Slavic Languages, an M.D. in medicine, and he completed a fellowship in clinical pharmacology at Vanderbilt University.

Dr. Robertson is the 2007 recipient of the Earl Sutherland Prize for Achievement in Research awarded annually to a Vanderbilt faculty member whose achievements in research, scholarship, or creative expression have had significant critical reception and are recognized nationally or internationally.

Dr. Robertson’s research interests are in the autonomic control of human physiology and in clinical and translational strategies to evaluate such investigative questions. In 1978, he established the first Autonomic Dysfunction Center to discover new etiologies of dysautonomic disorders. He subsequently discovered previously unrecognized disorders like dopamine beta hydroxylase deficiency norepinephrine transporter deficiency, and baroreflex failure. He has trained over 30 fellows in the autonomic field. Dr. Robertson’s trainees occupy scientific and investigative leadership positions in the United States and abroad, including five department chairs and deans.

Currently, he serves as associate editor of the Journal of the Chinese Medical Association and editor for Spotlight on Rare Diseases. Dr. Robertson is an editorial board member of Rambam Maimondies Medical Journal and Clinical Autonomic Research. He has been a member of several editorial boards including American Board of Clinical Pharmacology, Drug Therapy (Editor), and Association of American Physicians.

Dr. Robertson’s third English and first Japanese edition of "Primer on the Autonomic Nervous System" has been the major selling text in autonomic disorders since 1996. His textbook "Clinical and Translational Science," embodying an approach to the new discipline of clinical and translational research, appeared in 2009.

For more information on the Medical Student Research Day, contact Natalie Kent at (251) 461-1548.
Posted by Med School Watercooler at 3:10 PM No comments: 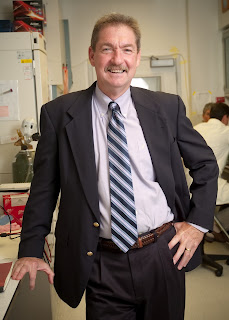 A scientific discovery made at the University of South Alabama College of Medicine has led to the formation of one of the first biotech companies to be launched along the Gulf Coast.

The company, Exscien, led by Steve and Christine Cumbie, was recently awarded a Science and Technology Transfer (STTR) grant by the National Institutes of Health to support the development of a new drug to prevent and reverse acute lung injury.

Dr. Mark Gillespie, professor and chair of pharmacology and a member of the Center for Lung Biology at the University of South Alabama College of Medicine, is one of the partners in the company. The USA College of Medicine will collaborate with Exscien in an effort to rapidly develop the treatments.

According to Dr. Gillespie, there are currently no drugs to effectively manage acute lung injury.

“Acute lung injury complicates a wide variety of medical disorders – from trauma and infection to transplants,” he said. “The STTR grant will examine the effectiveness of the drug in increasing the number of lungs that are available for transplant and in reducing lung rejection.”

Dr. Gillespie said most lungs available for transplant cannot be used partly because of concerns that they will perform poorly after introduction into the patient. As a result, of the approximately 14,000 people currently awaiting a lung transplant, only a small fraction actually receive the new organ. Dr. Gillespie indicated that basic research performed by USA investigators pointed to the prospect that the new drug, when given to donor lungs, could increase the number of lungs that can be safely transplanted by fixing them prior to the transplant procedure.

He said the drug will also target a major complication called primary grant dysfunction, a problem in which the lung fails within 48 hours of being transplanted.

Over the past decade, multiple studies by Dr. Gillespie and his colleague, Dr. Glenn Wilson, professor and chair of cell biology and neuroscience at USA, showed that damage to the DNA of mitochondria – the powerhouse of the cell – functions like a fuse, killing lung cells in various diseases.

“This new drug targets a repair enzyme to fix the DNA and protect the lung cells from injury,” Dr. Gillespie said. “It has real potential to emerge as a treatment for acute lung injury.”

During the first year of the grant, the researchers will verify the effectiveness of the drug. They will then begin experiments in human lungs. “This means we should be ready to begin experimenting in lung transplant patients in two to four years,” Dr. Gillespie said. “If it works well in human lung transplant, we’ll rapidly move to trials of the drug for acute lung injury.”

Dr. Gillespie said the STTR grant and Exscien are developments that emerged from an earlier funding cycle of a program project grant – or PPG – awarded by NIH to a team of pulmonary scientists at USA’s Center for Lung Biology. The PPG grant was recently renewed to examine the causes and consequences of pneumonia, a lung infection that is a major source of illness and death for children and adults over 65 years of age around the world. 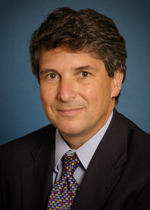 Dr. Allen Perkins, professor and chair of family medicine at the University of South Alabama College of Medicine, was recently elected president of the Alabama Academy of Family Physicians (AAFP).

Founded in 1949, the AAFP has over 800 active family-physician members as well as more than 350 student and family medicine residents. Headquartered in Montgomery, their primary mission is to provide educational programming for their members, as well as to represent family physicians and their patients in the legislative, regulatory, and public arenas.

Dr. Perkins has been a member of the USA College of Medicine faculty for 19 years. During this time, he has been involved in many educational and clinical facets of the USA Health System, including serving as director of the family medicine residency program and as medical director for the USA Family Medicine Center.

He currently serves as the president of Alabama Rural Health Association. He is a member of the Society of Teachers of Family Medicine and the American Academy of Family Physicians. He is also the program chair for the 2013 Association of Family Medicine Departments annual meeting in New Orleans, La.
Posted by Med School Watercooler at 3:10 PM No comments: