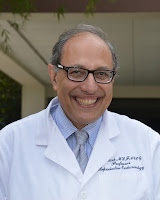 USA Health Department of Obstetrics and Gynecology will celebrate the retirement of three longtime members of reproductive endocrinology: Botros Rizk, M.D., professor of obstetrics and gynecology at the University of South Alabama College of Medicine and a reproductive endocrinologist with USA Health; Ruth Kennedy, clinical nurse practitioner; and Julie Hazelton, research technologist.

A reception will be held in their honor Friday, Aug. 23, from noon to 2 p.m. in the Multipurpose Room at USA Health Children’s & Women’s Hospital.

Collectively, Rizk, Kennedy and Hazelton have devoted more than 85 years of service to USA Health.
Posted by Med School Watercooler at 3:15 PM 2 comments: 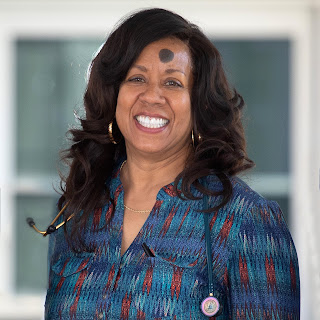 The September Med School Café lecture will feature Felicia Wilson, M.D., professor of pediatrics at the University of South Alabama College of Medicine and a pediatric hematologist/oncologist with USA Health.

Her lecture, titled “Gene Therapy: The Promise of a Cure for Sickle Cell Disease,” will be held on Sept. 6, at the USA Health Strada Patient Care Center Conference Room on the first floor. Lunch will be served at 11:30 a.m. The presentation begins at noon.

According to Wilson, sickle cell disease (SCD) is a group of inherited red blood cell disorders. Healthy red blood cells are round, and they move through small blood vessels to carry oxygen to all parts of the body. In someone with SCD, the red blood cells become hard and sticky and look like a C-shaped farm tool called a “sickle.”

The sickle cells die early, which causes a constant shortage of red blood cells. When they travel through small blood vessels, they get stuck and clog blood flow. This can cause pain and other serious problems such as infection, acute chest syndrome and stroke. Sickle cell-related death among African American children younger than 4 years of age fell by 42 percent from 1999 to 2002, according to the Center for Disease Control. The drop coincided with the introduction in 2000 of a vaccine that protects against invasive pneumococcal disease.

During the lecture, Wilson will discuss a new approach to helping sickle cell patients – a new gene therapy that appears to offer the same benefits as a bone marrow transplant, without the risk of rejection.

The Med School Café lecture and lunch are provided free of charge, but reservations are required. For more information or to make reservations, call Kim Partridge at (251) 460-7770.

Med School Café is a free community lecture series sponsored by USA Health. Each month, faculty from the USA College of Medicine share their expertise on a specific medical condition, providing insight on the latest treatments available.

The USA Health Strada Patient Care Center is located at 1601 Center St. in Mobile.
Posted by Med School Watercooler at 1:28 PM No comments: This year's USA Health Game Day is set for Thursday, Oct. 3, at 6:30 p.m., as the USA Jaguars take on Georgia Southern University at Ladd-Peebles Stadium.

USA Health employees, University of South Alabama College of Medicine faculty members, medical students and basic medical sciences graduate students will be eligible to receive two free game tickets and two passes to our tailgate event. Sonny's BBQ will be served from 4:30 to 7 p.m. at the USA Health tent.

USA Health Game Day is an annual event that recognizes and honors our employees and volunteers for their many contributions to our mission. More details to come as we get closer to the event.
Posted by Med School Watercooler at 11:15 AM No comments:

Four medical students at the University of South Alabama College of Medicine will receive $60,000 scholarships from Blue Cross and Blue Shield of Alabama as part of a $1.2 million initiative aimed at improving access to healthcare in medically underserved areas of the state.

Angela Mosley-Johnson, Hannah Brooks, Kimberly McWilliams and Samantha Lee, all third-year medical students at USA will receive $30,000 a year, which covers tuition for the final two years of medical school. Following their residency training in a primary care specialty, the four will commit to practicing in underserved communities in Alabama for a minimum of three years.

“Serving the healthcare needs of Alabamians has been a longstanding tradition for our graduates,” said John V. Marymont, M.D., MBA, vice president for medical affairs and dean of the USA College of Medicine. “These four students are answering the call to take their skills to areas that lack sufficient access to healthcare. They are continuing in this important tradition.”

In 2018, Blue Cross and its charitable organization, The Caring Foundation, awarded $60,000 to three students at the USA College of Medicine as part of the five-year scholarship initiative.

Mosley-Johnson was raised in the small town of Cuba, Alabama, in Sumter County, but said that wasn’t familiar with the issue of health disparities until she took a health psychology course as an undergraduate at Vanderbilt University. She changed her major from clinical psychology to medicine after completing a thesis on health disparities among African Americans.

She said she intends to become an obstetrician-gynecologist. “It is my hope to provide exceptional medical care to women, but to also advocate for women’s health at a local and federal level,” Mosley-Johnson said. “I would love to one day establish a clinic in Cuba or York, Alabama, or partner with a nearby hospital to provide care to women in the community.”

Brooks said the scholarship will help her fulfill her long-term goal to serve her hometown of Mobile. “For me, the most compelling aspect of medicine has always been the physician’s role as servant,” Brooks said. “Personally, I feel that the physician’s role of servant is most prominent in primary care, which is one of the reasons why I have always felt drawn toward pediatrics. This scholarship is for students who want to do just that.”

McWilliams, a native of Alexandria, Alabama, said she intends to focus on family medicine and psychiatry. “My ultimate goal is to open several nonprofit clinics that focus on preventive care and help change the perception of medicine in the community,” McWilliams said. “I hope to facilitate an atmosphere that provides patients with both the educational means and physical opportunities to take charge of their mental and physical well-being.”

Lee, a native of Mobile County, said she applied for the scholarship because she had already planned to stay near home and close to family in Theodore and Wilmer. “I was honored for the opportunity to apply to a program that would help me to increase the quality of primary care in a community that has helped me become who I am today,” Lee said. “My long-term career goal is to ultimately bring more mental health awareness and preventative care to my community.”
Posted by Med School Watercooler at 11:14 AM No comments: