Future doctor gets interest in medicine, white coat from dad

As a youngster, Jordan Matthews Smith followed her father, an orthopedic surgeon, on rounds to see his patients. In high school and college, she followed him farther, on medical mission trips to Kenya and Ecuador where she even scrubbed in and assisted on surgical cases.

Naturally, Smith chose medicine as a career, enrolling at the USA Health College of Medicine after graduating from the University of Virginia in human biology in 2016. 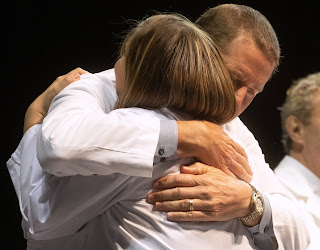 Smith continued in her father’s footsteps this past Saturday as the pair stood onstage at the College of Medicine White Coat Ceremony at the Mitchell Center. Dressed in his physician's coat, Dr. Daniel Matthews helped his daughter into her first white coat as a rising third-year medical student. The two shared a long embrace, capturing a special moment during Father’s Day weekend.

“It is truly priceless to have someone who really can understand what becoming a doctor involves and who also exemplifies the kind of doctor I want to be,” said Smith, who was raised in Fairhope and graduated from Bayside Academy in 2012. “The way he has incorporated faith and prioritized family while being a fantastic physician inspires me.”

Smith shares her father’s love of the operating room and is considering several surgical specialties including OB/GYN. Later this month, she begins the second half of medical school, where she will trade the classroom for the clinic, where she will rotate through seven clerkships starting with neurology this summer.

“I am really looking forward to exploring all my interests in the upcoming months as a third year,” she said.