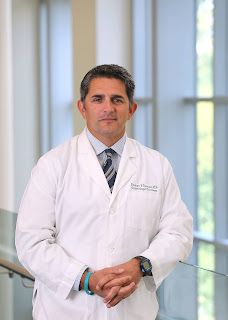 USA Health research demonstrating that a vaccine made from patients’ own tumors could extend the lives of women with late-stage ovarian cancer, particularly those without a BRCA gene mutation, has been published in the December 2020 issue of The Lancet Oncology. The work originally was presented at the Society of Gynecologic Oncology in March.

“This vaccine is as targeted as targeted therapy can get,” said Rodney P. Rocconi, M.D., Elsie Colle Chair of Oncology Research at the USA Health Mitchell Cancer Institute and professor of gynecologic oncology at the USA College of Medicine. “It uses specific techniques to recruit the immune system to target each patient’s specific cancer antigens, ensuring the vaccine specifically attacks the correct target, the cancer.”

The phase 2 clinical trial involved 91 women with stage 3 and stage 4 ovarian cancer who had completed primary chemotherapy and were randomized to a Vigil vaccine or a placebo. The Vigil vaccine is a genetically engineered vaccine made from cancer cells acquired from patients during surgery. Researchers found that the vaccine improved survival with low toxicity.

“These significant results, specifically in patients without a BRCA gene mutation, are a novel discovery that could affect the standard of care for those BRCA-negative patients, which has not changed in nearly 25 years,” Rocconi said.

Rocconi said that the prognosis for patients with advanced epithelial ovarian cancer remains poor overall. Although most women have a complete response to initial therapy, the majority experience a recurrence. Any improvement in reducing recurrence or extending the time spent cancer free is a big step forward in treatment, he said.

Read the article in The Lancet Oncology.

Posted by Med School Watercooler at 11:58 AM