As friends of the 2010 Nobel Peace Prize laureate Liu Xiaobo, Jie Li of the University of South Alabama Biomedical Library and her husband Cai Chu were invited by the Norwegian Nobel Committee to attend the Nobel Peace Prize Ceremony in Oslo, Norway, on Dec. 10, 2010.

"I got to thank Denzel Washington for hosting this year's Nobel Peace Prize Concert," Li said. "I also had the honor to meet the Norwegian Queen and shake hands with her. It was all very exciting."

Liu was not present at the ceremony, as he is serving an 11-year sentence for "inciting subversion to state power" through his writings and role in Charter 08, a manifesto advocating human rights, freedom of expression and peaceful transformation to democratic society.

Li and Chu started working with Liu in 2001 when they and a group of Chinese writers formed the Independent Chinese PEN Center (ICPC), an affiliate of the International PEN. Liu and Chu were elected president and vice-president of ICPC in 2003 and worked together to advocate freedom of information, freedom of speech and human rights in China.

In 2006, Liu and Chu formed Democratic China, Inc., a non-profit organization supported by the National Endowment for Democracy. The organization publishes a Chinese language journal, Democratic China Electronic Journal, that provides a platform for discussing and debating on China’s peaceful transformation to democracy. The journal’s principles are democracy, freedom, human rights, rule of law and constitutionalism.

As a volunteer for the organizations, Li said she helped with English translation and some administrative roles, such as application for non-profit organization status. Li served as the organization’s president and the journal’s editor-in-chief until he was arrested in December 2008.

"China has achieved great economic success in the recent decades and has lifted several hundred million Chinese out of poverty," Li said. "However, Liu and his wife Liu Xia’s absence at the ceremony shows that China’s rapid economic development has not necessarily achieved democratic transformation as many believed."

"Liu is the first Chinese living in China that won a Nobel Prize," Li said. "It really was a historical event." 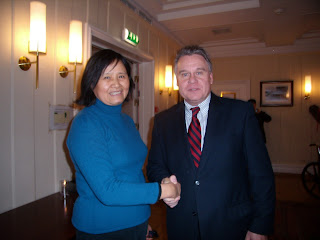 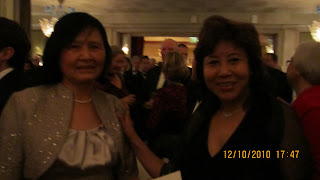 Li (left) and friend at the Nobel Peace Prize Banquet
Posted by Med School Watercooler at 3:56 PM No comments: 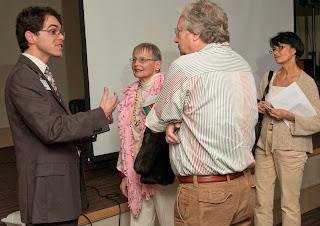 This month's Med School Café lecture, "Early Detection of Cancer," was given by Gastroenterologist Dr. Silvio deMelo, assistant professor of internal medicine at USA. The lecture was held at the Mobile Museum of Art and had a total of 70 attendees.

Video from this lecture will be posted online by next week. To read more about the lecture, click here.

The next Med School Café lecture will be held on Jan. 18, 2011, and will feature Dr. Jack A. DiPalma, professor of internal medicine at USA. If you are interested in attending, email kebarnes@usouthal.edu for details.
Posted by Med School Watercooler at 2:51 PM No comments: 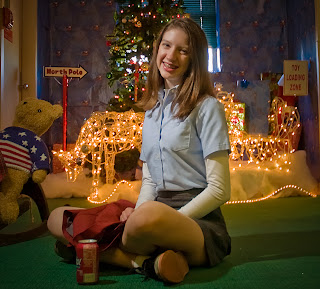 Paiton Goodwin, a 14-year-old student at UMS-Wright Preparatory School in Mobile, knows what it means to make a difference.

On Dec. 1 – also known as World AIDS day – Paiton donated $522 to the University of South Alabama’s Family Specialty Clinic, whose mission is to provide comprehensive multidisciplinary care to children and their families affected by HIV. The money was raised by selling soda cans that she had been collecting in her backyard for three months.

Her mother, Linda Goodwin, said this act of kindness is just one example of Paiton’s determination to help others. “Paiton collected cans in the third grade for the same clinic, totaling $400,” Goodwin said. “She’s also collected cans for Penelope House – she really enjoys helping others.”

“I’m very proud of her,” Goodwin said of her daughter. “She’s a caring child and always has been.”

“I think she sets a great example of altruism, caring and compassion,” said. Dr. Benjamin Estrada, professor of pediatrics at USA. “We are highly appreciative of her efforts. It is because of people like Paiton that we should be optimistic about the future of our society.”

Paiton began collecting cans in September from her friends and family. “It was her idea to collect the soda cans – she would save them up in the space she had outside, and when the space got full she would go sell them,” Goodwin said.

Eventually, collecting the cans became a habit. “Paiton would see them on the side of the road and want me to pull over so she could grab them,” Goodwin said.

Paiton decided to donate the money to the Family Specialty Clinic at USA after a family friend told her about the clinic. Goodwin said the money will be used to buy Christmas presents for the clinic’s patients. “Paiton hopes her contribution will allow every child to have a very Merry Christmas.”
Posted by Med School Watercooler at 2:49 PM No comments: 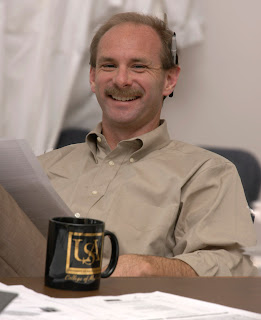 Dr. Troy Stevens, director of the University of South Alabama Center for Lung Biology, was recently awarded a Method to Extend Research in Time (MERIT) award by the National Institutes of Health.

For more information on this story, click here.
Posted by Med School Watercooler at 2:18 PM No comments:

Twenty-four physicians affiliated with the University of South Alabama College of Medicine have been included in the annual Best Doctors in America database. The following physicians were chosen for the list after extensive peer review by thousands of doctors:
USA Physicians Group, the private practice of the academic physicians at the USA College of Medicine is the region’s largest multi-specialty practice and the only academic physicians group along the central Gulf Coast.

Best Doctors, Inc. is a database that uses peer review along with other criteria to determine the most qualified doctors in various fields of medicine. The database seeks physicians whose reputation and expertise put them in the top 5 percent of their specific specialty. To ensure impartiality, physicians cannot pay to be included in the database, nor are they paid for their participation.
Posted by Med School Watercooler at 10:40 AM No comments: 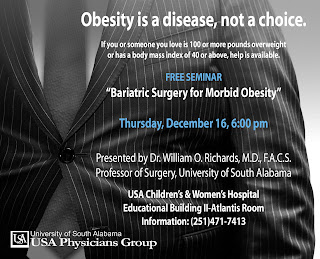 Dr. William O. Richards, professor and chair of surgery at the University of South Alabama College of Medicine, will present a free community seminar about weight loss surgery at 6 p.m. on Dec. 16, 2010. The lecture will take place in the Atlantis Room in the CWEB-II building behind USA Children’s and Women’s Hospital.

Directions: Enter the Geri Moulton Children’s Park from Springhill Avenue. At the end of the park, turn right on Center Street and then left on Cox Street. Turn left into the rear parking lot and pass the guard shack. There are several buildings accessible from this parking lot. CWEB II/Atlantis room is the last building.
Posted by Med School Watercooler at 10:36 AM No comments: