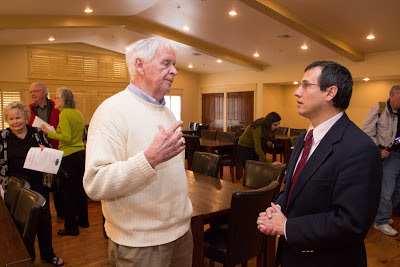 The lecture, titled “Surgical Treatment of Seizures,” had a total of 60 attendees. During the talk Dr. Ochoa provided the latest information on the cause of epilepsy, a disorder that results from the generation of electrical signals inside the brain, as well as innovative care options.

The next Med School Café lecture will feature Dr. William Broughton, professor of internal medicine at the USA College of Medicine. Dr. Broughton, who is board certified in sleep medicine, will lecture on sleep disorders. The event will take place March 22, 2013, at the USA Faculty Club on USA's main campus. 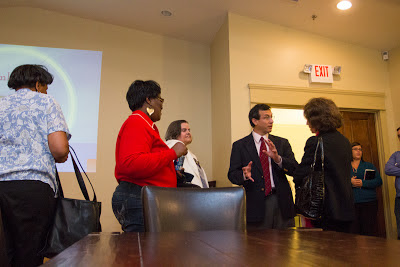 Posted by Med School Watercooler at 9:05 AM No comments:

Dr. Craig T. Bogar, adjunct assistant professor of family medicine at USA and co-advisor for the Family Medicine Interest Group, said the goal of the Procedures Workshop was to give FMIG members hands-on experience to complement what they are learning in the classroom.

Students were taught sterile techniques and learned how to suture. Other procedures taught during the workshops included mini-delivery, intubation, how to read a chest X-ray, and how to administer a shoulder exam.

To learn more about the Family Medicine Interest Group at USA, contact Dr. Bogar at ctbogar@usouthal.edu.
Posted by Med School Watercooler at 9:04 AM No comments:

On March 15, 2013, senior medical students and residency training program directors across the United States and Canada will find out this year’s Match Day results.

The National Residency Matching Program, or Match Day, is the annual event in which future doctors simultaneously learn where they will be doing their residency training.

Locally, the University of South Alabama’s Match Day will be held at 10:30 a.m. CST, on March 15, 2013, in the Bon Secour Bay Ballroom at the Renaissance Riverview Plaza Hotel in Mobile. The envelopes containing Match results will be handed out shortly before 11 a.m.

The Match works like this. After interviewing with several different residency programs - both near and far - students provide a ranking of their top-choice programs in order of preference. The training programs, in turn, rank the students who interviewed.

This year's Match Day will be streamed live here. In addition, Match Day results for University of South Alabama students will be tweeted live on the USA College of Medicine Twitter page found here.

To read about last year's Match Day event, click here.
Posted by Med School Watercooler at 8:48 AM No comments: 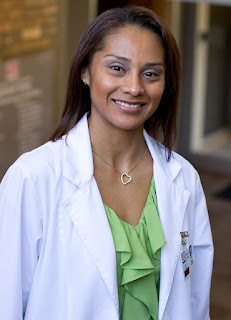 Prior to her appointment at USA, Bramhall was a nurse practitioner with Pulmonary & Critical Care Specialists in Norfolk, Va.

Bramhall earned her nursing degree from Rutgers State University in Newark, N.J., and her master’s of science in nursing at the University of Southern Mississippi in Hattiesburg, Miss.

Bramhall is a member of the American Academy of Nurse Practitioners and is fluent in Spanish. 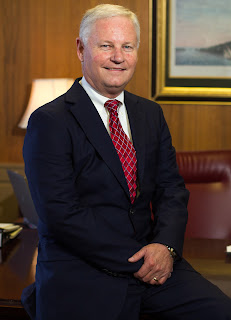 Stan Hammack, vice president for health systems at the University of South Alabama, has been honored by the American Hospital Association as Alabama’s recipient of the AHA’s Grassroots Champion Award. The award, given in conjunction with the Alabama Hospital Association, recognizes the achievements of grassroots leaders in each state.

Hammack was honored for his work in Alabama over the previous year in effectively delivering the hospital message to elected officials, helping broaden the base of community support for hospitals and advocating tirelessly on behalf of patients, hospitals and communities.

“It’s my privilege to work on behalf of all hospitals and providers in Alabama,” Hammack said. “I'm truly honored to receive this acknowledgement from my peers in Alabama and am proud to represent our state with this national award.” The award will be presented April 30 at the American Hospital Association’s “Breakfast of Grassroots Champions” in Washington, D.C.

“Stan Hammack has earned this special recognition through his dedication to the hospital mission, on both the local and the national level, and we are looking forward to thanking him and sharing our deep appreciation for all that he does every day,” Rich Umbdenstock, president and CEO of the American Hospital Association, said.

A tireless advocate for health care quality and accessibility in Alabama, Hammack was appointed in 2012 by Gov. Robert Bentley to the Alabama Medicaid Advisory Commission, where he also serves on the executive committee. He was also appointed by the governor to represent public and governmental hospitals on the Medicaid Hospital Services and Reimbursement Panel, and is chair of the Alabama Hospital Association’s Medicaid Steering Committee. He serves on the board of directors for the Business Council of Alabama and is on the membership committee of the National Association of Public Hospitals and Health Systems.

Hammack has served with a wide range of health care organizations, including the Alabama Department of Public Health, the Southwest Alabama Medicaid Maternity Care Program, Blue Cross and Blue Shield of Alabama and the American Hospital Association. He was awarded the Gold Medal of Excellence by the Alabama Hospital Association in 2009.

Hammack has served USA’s medical mission for more than 30 years. He has an extensive background in the medical field, starting as a pharmacist at the USA Medical Center before transitioning into administrative leadership positions in three USA hospitals. Under Hammack’s direction, the USA Health System has become recognized as the Gulf Coast’s most respected provider of health care, with nationally acclaimed physicians and the latest scientific and medical technologies found together only in academic health care.

A native of Jasper, Ala., Hammack is a graduate of Auburn University and holds a master’s in public administration from the University of South Alabama. He lives in Mobile with his wife, Brenda, and their children, Brien and Jenifer.
Posted by Med School Watercooler at 10:01 AM No comments: