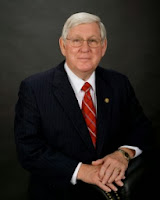 This past week, the University community lost USA President Emeritus Gordon Moulton. During his tenure as president, he played many roles - a leader, a visionary, and a patient in our health system.
President Moulton had a management style that brought the best out of leadership.

“The overall legacy that he left for me both personally and for the health side of the university is his unyielding commitment to excellence and quality,” said Dr. Ronald Franks, vice president for health sciences at the University of South Alabama. “He insisted that he himself live up to that standard, which inspired all of us who worked with him to do the same.”

Noted for trying new things and improving both the University and the Mobile community, President Moulton went out of his way to engage the community in the university’s growth and to give them opportunity for ownership.

“Gordon’s engaging with the community was fundamental to how he worked,” said Stan Hammack, vice president for health systems at USA. “Almost everything he had a hand in building had that constant eye of ‘what will it do for the community and the region.’ He wanted everything to be thought of as adding to the city’s string of pearls.”

Hammack said President Moulton not only made sure service demands were met, but he was also creative in how the services were brought to the community. “He was supportive of an improved entry to USA Children’s & Women’s Hospital,” Hammack said. “But he also understood the importance of visual elements like the sculpture park and what that would bring to patients and visitors. This creativity ultimately resulted in the Children’s Park, named in honor of his wife Geri, who led the effort to create a special park to enhance USA Children’s & Women’s Hospital.”

“Gordon made a connection to the people,” Hammack added. “That’s his mark.”

Driven in part by their own personal experiences, Mayer Mitchell and President Moulton recognized the need to expand on the already established commitment to cancer prevention and treatment in the health system. “That vision led to the development of the USA Mitchell Cancer Institute as a comprehensive cancer center aimed at conducting research and providing clinical care, bringing the latest discoveries and approaches to the people of the Northern Gulf Coast and surrounding region,” Dr. Franks said.

President Moulton had faith in USA’s Health Care System and its providers. “He had utmost confidence in the care provided by the USA Health System,” said Dr. Franks. “He chose to come here for the treatment and follow-up of his life-threatening illness. He believed in us, recognizing that we shared his same unyielding commitment to excellence and quality.”
Posted by Med School Watercooler at 3:13 PM No comments:

Another Good Reason to Get Vaccinated

Six first-year medical students at USA have volunteered to administer the flu vaccines at the Mitchell Center on Wednesday, Oct. 9, from 12:00 - 4:30 p.m.

Medical student Jacob Sexton said he is looking forward to the hands-on time that administering the vaccines will offer. “I volunteered to administer the vaccines because I wanted to prepare for future visits to my clinical assignment,” he said. “I also hope to continue to work on my communication skills during the day while working with the students, faculty, and their families.”

Jelaina Scott, another first-year medical student, said the flu shot is an easy and efficient preventative method in medicine. “As a future physician, I want to seize every opportunity I can to help promote a healthy lifestyle in my community,” she said. “I think it is very important for everyone to have access to the flu vaccinations and other vaccinations because they help alleviate health issues that are preventable."

The walk-in clinics are available October 9th through the 11th at six convenient locations. Family members covered by the USA Health & Dental plan are also eligible for the seasonal flu vaccines at these clinic sites free of charge. This applies to children four years old and older. No appointments are necessary.

For more information and to view the complete list of flu shot clinics, visit http://www.usahealthsystem.com/fluvaccine. If you have any questions, call our appointment and information line at (251) 434-3711.

It is especially important for those who are considered high risk to get vaccinated. This includes people who have certain medical conditions including heart disease, asthma, diabetes, and chronic lung disease; pregnant women; and people younger than 5 years and people 65 years and older. To learn more about the flu and heart disease, click here.
Posted by Med School Watercooler at 8:47 AM No comments: 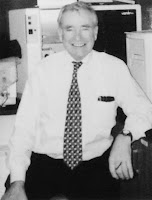 While working at USA, he received the prestigious National Institutes of Health (NIH) Merit Award that funded his laboratory research – one of only five USA recipients in the University’s history. His research led to his distinction as an international expert in iron absorption and metabolism.

Dr. Conrad had more than 400 scientific articles published in national and international science and medical journals. His research was funded by various governmental institutes or agencies. He served on NIH study sections for more than 40 years. From 1990 to 2004, Dr. Conrad served as principal investigator for the Minority Based Community Cancer Oncology Program sponsored by the National Cancer Institute.

In 2001, the University honored Dr. Conrad with a Distinguished Professor of Medicine appointment.

A memorial service was held on Sept. 30, 2013, at Immaculate Heart of Mary Catholic Church, Atlanta. Interment will be at Arlington National Cemetery. To sign an online guest book, click here.
Posted by Med School Watercooler at 8:40 AM No comments: 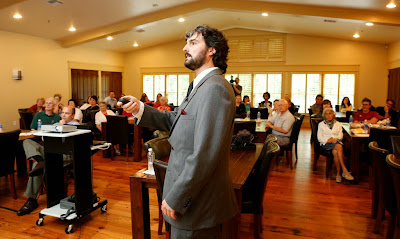 During the talk, Dr. Dees, who specializes in movement disorders, discussed how deep brain stimulation works, who is a good candidate for the surgery, and what patients and their families can expect while going through the process. He also provided important information on other treatment options for Parkinson’s disease, essential tremor and dystonia.

The next Med School Café lecture will feature Dr. Sudhakar Madanagopal, associate professor of orthopaedics at the USA College of Medicine. 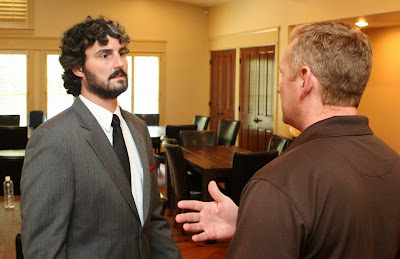 Posted by Med School Watercooler at 2:04 PM No comments:

Dr. Elizabeth Minto was recently appointed assistant professor of neurology at the University of South Alabama College of Medicine and serves as a neurologist with USA Physicians Group.

Dr. Minto attended the USA College of Medicine for two years before completing her medical degree at the University of Alabama at Birmingham School of Medicine in 2003. She completed an internship in internal medicine in 2004, followed by neurology residency in 2007, both at Vanderbilt University.

Dr. Minto is board certified by the American Board of Psychiatry and Neurology. She is currently a member of the American Academy of Neurology, the Medical Association of the State of Alabama, and the Mobile Medical Society.

Dr. Minto is now accepting new patients. She is a general neurologist, but has special interests in multiple sclerosis and headache.  To make an appointment, call (251) 660-5108.
Posted by Med School Watercooler at 9:00 AM No comments: