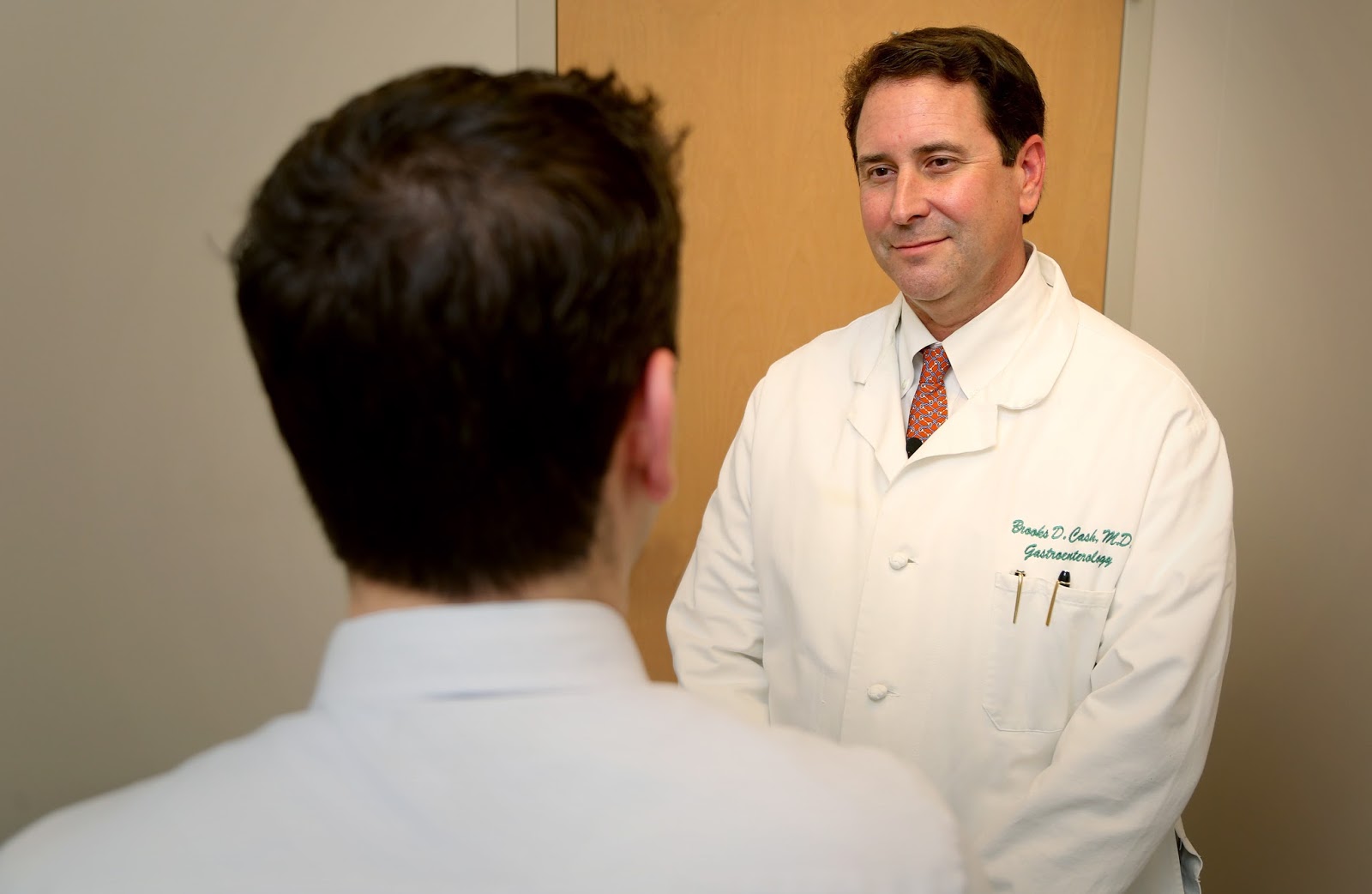 The University of South Alabama Digestive Health Center is in need of patients to participate in a clinical study on functional dyspepsia. The goal of the study is to treat the symptoms and enhance the quality of life of patients who suffer from the condition.

Functional dyspepsia is characterized by abdominal pain that is not caused by structural gastrointestinal conditions such as gallbladder disease, peptic ulcer disease, or gastroesophageal reflux disease. The condition causes pain, discomfort and bloating in the upper abdomen above the belly button. Early fullness during or after a meal, nausea and belching are also common symptoms associated with functional dyspepsia.

Dr. Brooks Cash, professor of internal medicine at the USA College of Medicine and a gastroenterologist with USA Physicians Group, said functional dyspepsia is very common, affecting between 5-10 percent of the population. Currently, no medications are approved to treat the symptoms of functional dyspepsia.

The purpose of the functional dyspepsia clinical study is to evaluate the effectiveness of the new medication FDgard. The unique capsule contains a combination of caraway seed oil and peppermint oil.

“Both of these natural products have been used for centuries to treat chronic abdominal symptoms due to their antispasmodic and pain relieving qualities,” Dr. Cash said. “Each capsule contains a formulation of specially coated micro pellets that release the therapy into the small intestine, as opposed the stomach, to reduce the common side effect of heartburn that is common with peppermint oil.”

Dr. Cash said there are at least 10 published randomized clinical trials of combinations of peppermint and caraway for the treatment of functional dyspepsia. In one trial with 120 patients, an herbal preparation containing peppermint leaves, caraway fruit and other plant extracts, 43 percent of adults meeting clinical criteria for functional dyspepsia had complete symptom relief at eight weeks, as compared to 3 percent of those treated with placebo. In another trial, 96 patients with functional dyspepsia were treated with either placebo or an enteric-coated capsule containing peppermint and caraway oils for four weeks. In this trial the herbal preparation was more likely than placebo to reduce both abdominal pain intensity and global dyspeptic symptoms.

Adults diagnosed with functional dyspepsia between the ages of 19 and 65 may qualify to participate in the clinical study. Eligible participants will receive study-related care at no cost and up to $275 in compensation for time and travel.

Dr. Samuel Strada, dean of the University of South Alabama College of Medicine, recently was honored as a 2015 recipient of the GoDaddy Bowl Champion of Life Award.

Each year, a group of deserving individuals who have attained great success by demonstrating dedication and hard work are selected to receive the Champion of Life Award. The award honors Dr. Strada’s commitment to excellence in the community, state and nation.

Dr. Strada earned a bachelor of science degree in pharmacy, graduating with distinction in 1964 from the University of Missouri-Kansas City (UMKC). He continued his education earning a master’s degree in pharmacology from the University of Missouri at Kansas City School of Pharmacy. In 1970, he received a doctorate in pharmacology from Vanderbilt University School of Medicine in Nashville, Tenn.  He completed postdoctoral training as a Staff Fellow in Washington, D.C., Saint Elizabeth’s Hospital, National Institute of Mental Health (NIMH).  Prior to joining USA, he spent 11 years on the faculty at the University of Texas Medical School at Houston during which he served one year as acting chair of pharmacology. He joined the school as assistant professor, was promoted to full professor in 1981 and completed a sabbatical year (1979-80) as a Senior International Fellow in the laboratory of Professor Sir Philip Cohen, MRC Protein Phosphorylation Institute, Department of Biochemistry, Dundee University, Dundee, Scotland.

Dr. Strada joined USA as professor and chair of pharmacology in 1983. In 1994, he was named senior associate dean for the USA College of Medicine. His other appointments at USA included acting director of the graduate program in basic medical sciences, assistant dean for admissions and acting chair of psychiatry.  He was instrumental in the creation of the Office of Technology Development, The Office of Research Compliance and Assurance, and the USA Technology and Research Park. He has served on numerous college and university-wide committees, including chair of the Athletic Council and as Faculty Athletic Representative to the NCAA and SunBelt Conference from 1990-1997.

Dr. Strada has published more than 200 articles and abstracts, earning national recognition for his research on cellular signaling mechanisms. He has been an active member in the American Society for Pharmacology and Experimental Therapeutics and the Council of Academic Societies of the Association of American Medical Colleges. In addition, he has served as president of the Association for Medical School Pharmacology Chairs as well as the Southeastern Pharmacology Society.

The Champion of Life Award was presented to Dr. Strada during the GoDaddy Bowl’s Mayor’s luncheon banquet on Dec. 22, 2015, at the Mobile Convention Center.
Posted by Med School Watercooler at 10:14 AM 1 comment: 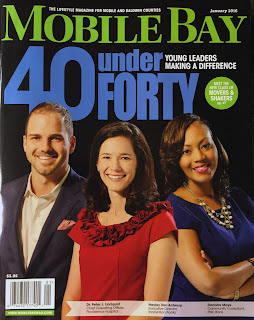 Three employees within the University of South Alabama Health System recently were selected to be included in the 2015 class of the Mobile Bay 40 Under 40: Dr. Elizabeth Minto, assistant professor of neurology at the USA College of Medicine and a neurologist with USA Physicians Group; Emily Hughes, nursing project coordinator at USA Children’s & Women’s Hospital; and Kelly McCarron, director of development at the USA Mitchell Cancer Institute.

A board-certified neurologist, director of neuroimmunology and infusion and director of the neurology clinic operations, Dr. Minto has proven that her strong medical and leadership skills go beyond the classroom. From 2011 to 2013, she served as the medical consultant for the Social Security Administration for the State of Alabama, and since 2007 has been a member of the Medical Society of Mobile County, an organization with more than 1,000 Mobile area medical professional members. Additionally, she has sat on the board of directors for Camp Rap-a-Hope as well as for Shepherd’s Place Adult Day Respite.

As 2004’s Excellence in Practice award recipient from the USA College of Nursing and 2014 Alpha Omicron Pi Gamma Delta Chapter Alumnae of the Year, Hughes proves an asset to her coworkers and community. When not working to keep the hospital in compliance with safety regulations, she devotes her time to charitable causes through the Junior League of Mobile and serving on the Alpha Omicron Pi Alumni Advisory Board at the University of South Alabama.

Since college, McCarron has shown a natural skill for fundraising in the alumni offices of both Vanderbilt University and Spring Hill College. In her first three years as director of development at MCI, McCarron surpassed fundraising goals despite being hired during a recession. McCarron also serves on the board of Camp Rap-a-Hope.

The annual Mobile Bay 40 Under 40 awards identify 40 of the area’s young professionals who will benefit the community for years to come with their leadership, professional excellence and community service.

Those who were chosen to be included in 40 Under 40 were featured in the January issue of Mobile Bay. Click here to view the article in its entirety.
Posted by Med School Watercooler at 3:14 PM No comments: 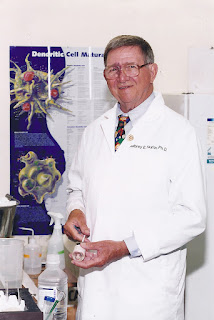 Dr. Aubrey Elmo Taylor, emeritus professor and chair of physiology at the University of South Alabama College of Medicine, passed away on Dec. 23, 2015. He was 82.

Dr. Taylor was born in El Paso, Texas, and grew up in Bryson, Texas; Ventura and Oxnard, California; and Fort Worth, Texas, where he graduated from Paschal High School. After serving in the U.S. Army from 1953-1955, Dr. Taylor earned his bachelor of arts degree in mathematics and psychology from Texas Christian University in Fort Worth, Texas.

He completed a National Institutes of Health Predoctoral Fellowship at the University of Mississippi Medical Center and earned his Ph.D. in physiology from the University of Mississippi School of Medicine in Jackson, Miss., training with Professor Arthur Guyton. His first faculty appointment as an assistant professor was in that same department. He then moved to Professor A.K. Solomon's Biophysical Laboratory at Harvard University for postdoctoral training in membrane transport and nonequilibrium thermodynamics under the guidance of Professor Peter Curran.

While at the University of Mississippi, Dr. Taylor developed an interest in both medical and graduate education, serving as director of the physiology department's graduate program.

In 1977 Dr. Taylor was appointed professor and chair of the physiology department at USA. In 1993 he was appointed the Louise Lenoir Locke Eminent Scholars Chair, Distinguished Professor of Physiology at USA.

“His appointment as chair brought stability and notoriety to the position,” said Dr. Samuel J. Strada, dean of the USA College of Medicine. “His laboratory served as a fertile training ground for a number of postdoctoral fellows and junior faculty interested in the physiology of microcirculation, many of whom have gone on to have distinguished careers of their own. His leadership and stature contributed to a long tradition of excellence in basic science research evident since the inception of USA’s College of Medicine.”

In 2005, Dr. Taylor received the American Heart Association (AHA) Award of Meritorious Achievement for his work leading to the development of a position paper, “Environmental Tobacco Smoke and Cardiovascular Disease,” which was published in 1992 in Circulation, an AHA publication, and his advocacy on behalf of the AHA’s position regarding environmental smoke and cardiovascular disease. The position paper, which reviewed the current scientific and medical data on second-hand smoke, confirmed AHA’s position that second-hand smoke is a major preventable cause of cardiovascular disease.  Throughout 1992 and 1993, he held news conferences, spoke to AHA affiliate and local divison boards and the Alabama Governor’s Health Conference on the impact of environmental smoke. In 1994, he testified to Congressional Subcommittees on environmental smoke and heart disease.

During his career, Dr. Taylor mentored 15 predoctoral graduate students and 20 postdoctoral fellows, making an impact on each one’s professional development.

“I was fortunate to train with Dr. Taylor as a postdoctoral fellow and to work as a faculty member in his department,” said Dr. Mary Townsley, professor of physiology and associate dean for faculty affairs at the USA College of Medicine. “Aubrey led and mentored by example. He instilled in his trainees enthusiasm for science, the work ethic needed for success, and the practice of volunteering time to the scientific community.”

A memorial service will be held for Dr. Taylor at a later date.

In lieu of flowers, donations can be made to the Taylor-Davis Scholarship in Physiology at the USA College of Medicine. To learn more, call 460-7032.
Posted by Med School Watercooler at 12:43 PM 2 comments: