To 77 students at the University of South Alabama College of Medicine, a sealed envelope represents more than an ordinary piece of mail. Opened in unison with their classmates, the letter from the National Resident Matching Program (NRMP) symbolizes the culmination of more than 950 days of medical school, countless hours training in hospitals and clinics, weeks of traveling for interviews, and the completion of one lifelong goal – to become a practicing physician.

On March 15, 2019, senior medical students at the USA College of Medicine gathered in the Grand Ballroom at the Mobile Convention Center. The annual event – coined Match Day – serves as one of the biggest days in a medical student’s career.

Before they opened their envelopes, Dr. John V. Marymont, vice president for medical affairs and dean of the USA College of Medicine, offered the anxious students some helpful advice. “Embrace what is in your envelope,” he said. “Your family has provided you with a solid support system and the faculty at the USA College of Medicine have provided you with the necessary tools needed to excel in your next steps. New doors are going to open for you and I am excited to see what the future holds for the Class of 2019.”

After interviewing with residency programs across the nation, students rank their top-choice programs in order of preference. Training programs, in turn, rank the students who interviewed. The NRMP then uses a mathematical algorithm to designate each applicant into a residency program. Each year, thousands of medical school seniors compete for approximately 24,000 residency positions across the United States.

“Match Day is a huge day for medical students,” Dr. Marymont said. “After students complete their undergraduate career, they go on to do four years of medical school where they earn their doctor of medicine,” he said. “During their residency training, they will become immersed in the specialty of their choice and build upon the fundamental skills they learned during medical school.”

A milestone for students, faculty and USA Health at this year’s Match Day ceremony was announcing one of the students entering the newly established emergency medicine residency program at USA Health. The program received accreditation in January and will welcome the first class of residents in July.

At Match Day, Christopher Musselwhite announced his inclusion in the inaugural emergency medicine residency class at USA Health. A native of Ocean Springs, Miss., Musselwhite served five years in the United States Coast Guard. He credits his experiences in the military for helping him realize his passion for medicine.

“I knew I wanted to pursue medicine shortly after graduating from the Coast Guard Academy,” Musselwhite said. “I really enjoyed my studies, and wanted to continue them in a way that would result in practical benefit for others.”

Musselwhite said another source of motivation was their response to the 7.0 magnitude earthquake in Haiti in 2010. “What was the most striking was coming on-scene to Port-Au-Prince and seeing the devastation,” he said. “One year prior, we had taken on supplies from Port-Au-Prince to deliver to northern Haiti for Hurricane Gustav response, and the city didn’t look the same at all.”

Musselwhite, along with his wife and three children, is looking forward to this next journey. He said he is honored to serve in the first class of emergency medicine residents. “I feel privileged to be in the first class because we get to shape the destiny of how the program will be in the future,” he said. “It’s exciting and I can’t wait to get to work.”

"Our motto in the Coast Guard is 'Semper Paratus,' which means 'Always Ready,'" he said. “This motto still holds true, because in the emergency department, you have to be always ready for whatever rolls in the door."

Perrin Windham, a native of Daphne, Ala. and another fourth-year student at the USA College of Medicine, is excited to serve as the first physician in her family. “When I was 8 years old, my father passed away from non-Hodgkins lymphoma after being sick for about five years,” she said. “A short time after that, I decided I would become a doctor because of the great doctors that took care of my father and my family while he was sick.”

As part of a new initiative aimed at expanding access to quality health care for all Alabamians, Windham was among three medical students at USA this year who received a $60,000 scholarship from the Blue Cross and Blue Shield of Alabama.

According to the Alabama Rural Health Association, 54 of Alabama’s 56 rural counties are entirely or partially classified as primary care and mental health care shortage areas. To help meet this need, Blue Cross and Blue Shield of Alabama partnered with the USA College of Medicine to offer $1.2 million in scholarships, over a five-year period, to deserving USA medical students. Primary care encompasses family medicine, internal medicine, pediatrics and obstetrics and gynecology.

Windham of Daphne, Ala., said the scholarship served as a reinforcement for her career path as well. She initially intended to specialize in oncology, the result of losing her father to cancer at a young age. But, once she went through the pediatrics rotation during her third year of medical school at USA, Windham realized her calling was working with children. “Being able to see kids, even when they were sick, made me so happy," she said. "I loved going to work every day."

Windham matched in pediatrics at the University of Tennessee College of Medicine in Chattanooga, Tenn. After completing her residency training, she will commit a minimum of three years to practicing as primary care physicians in medically under-served areas of Alabama, as part of the Blue Cross and Blue Shield scholarship.

USA alumna Tina Artz “traded in her soccer cleats for a stethoscope” – a notion she said helped set the stage for her medical school career.

During her senior year, USA won the Sunbelt Conference Tournament Championship. “The skills I mastered during my undergraduate career allowed me to go from working with an athletic team to a medical team," Artz said. "Instead of scoring goals, the aim of our game is getting our patients healthier.”

Artz matched in dermatology at Henry Ford Hospitals in Detroit, Mich. As she enters the highly competitive specialty – with only 25 residency positions available in the 2018 Match – Artz said she is greatly looking forward to starting this new journey.

David Roveda, a native of Mobile, Ala., and fourth-year medical student at the USA College of Medicine, serves as class president for the Class of 2019.  He chose to pursue another highly competitive specialty, as only 16 positions were available in the 2018 Match.

Roveda matched in radiation oncology at the University of Alabama Medical Center in Birmingham, Ala.

“I chose to specialize in oncology because the patient-physician relationship between cancer patients and their oncologists was at a deeper level than any other I witnessed during medical school,” he said. “I was always enamored by both the patients who sought to actively take control of their disease, as well as their physicians who had the opportunity to care for these patients in their most vulnerable moments.”

Roveda said he is looking forward to what his residency training will bring. "When I reflect on my four years here," he said, "those same principles frame the culture of the program and allow me to feel comfortable and confident entering residency."

Watch the recap video of Match Day 2019 on YouTube or below.

Posted by Med School Watercooler at 3:43 PM No comments:

Researchers at the University of South Alabama College of Medicine have developed a pre-clinical model for Acute Respiratory Distress Syndrome (ARDS), a progressive disease that occurs in critically ill patients. A team led by Dr. Diego F. Alvarez and Dr. Jonathon P. Audia published the results of this NIH/NHLBI-sponsored study in the Jan. 11, 2019, online edition of Pulmonary Circulation.

ARDS has a mortality rate of 40 to 60 percent in patients who develop the disorder, which is characterized by worsening lung function. Typically ARDS develops as a result of community- and hospital-acquired pneumonia and patients are treated in an intensive-care setting.

“Right now there are no therapies to treat these patients once ARDS develops other than supportive care,” said Audia, associate professor of microbiology and immunology. “Our goal is developing comprehensive models to understand the disease progression and how it resolves, and then ultimately being able to use this model to test new therapies.”

Audia and Alvarez, who is associate professor of physiology and cell biology, have been researching the pathogen Pseudomonas aeruginosa, a common cause of hospital-acquired pneumonia, and its impact on lung biology and pathogenesis for the past nine years, publishing numerous scientific articles on the subject.

The current study was the first to take a comprehensive look at the progression of ARDS in animal models examining effects on the lung vasculature, building upon the team’s previous work in cell cultures, Audia said.

The researchers examined two groups of mice infected with Pseudomonas aeruginosa – one group after 48 hours and the other after seven days. The first group of mice displayed the clinical hallmarks of ARDS, while the second group displayed lingering effects of infection, inflammation and fibrosis seen in patients who succumb to ARDS, but signs of lung repair also were observed.

The modeling sets the stage for future research. “We don’t know whether the host response is not strong enough to kill the bacteria or if there’s something defective with the repair pathway and the patients never fully recover,” Audia said. “It’s one of those things that’s a black box. Nobody knows which part goes awry.”

He said further research could help doctors predict how patients will fare in response to an initial pneumonia infection, and ultimately lead to the development of new interventions and therapies to combat pneumonia and ARDS.
Posted by Med School Watercooler at 1:00 PM 1 comment: 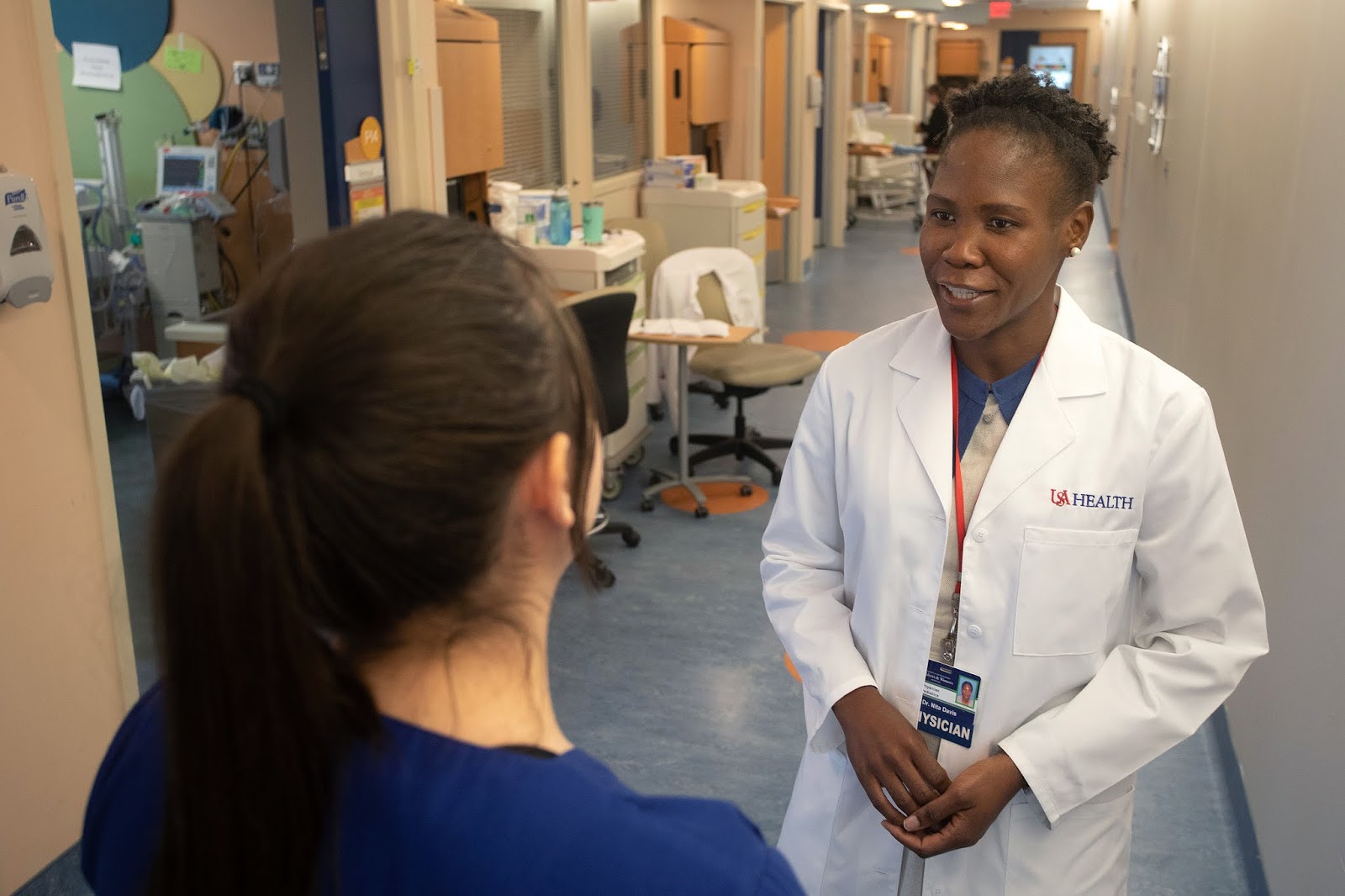 Dr. Nita Davis recently was appointed assistant professor of pediatrics at the University of South Alabama College of Medicine and serves as a pediatric critical care physician at USA Health Children's & Women's Hospital.

Dr. Davis earned her Bachelor of Medicine and Surgery from the University of the West Indies in Mona, Jamaica. She completed her residency training in pediatrics followed by a fellowship in pediatric critical care medicine at the University of Miami/Jackson Memorial Hospital in Miami, Fla. She also completed an advanced fellowship in pediatric cardiac critical care medicine at the Medical College of Wisconsin/Children’s Hospital of Wisconsin in Milwaukee.

"It is important for patients to learn how to manage diabetes well to prevent or delay the complications," Justice said. "Communicating the information and supporting skills needed to promote effective coping and management required for day-to-day living with diabetes requires a personalized and comprehensive approach."

According to the ADA, benefits of DSMES include improved clinical outcomes and quality of life, while reducing hospital admissions, re-admissions and estimated lifetime health care costs. Learn more at the American Diabetes Association.