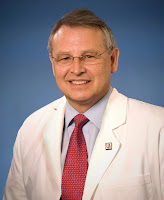 Dr. William Richards, professor and chair of surgery at the University of South Alabama College of Medicine, has been awarded a federally funded research grant by the National Institutes of Health (NIH) totaling $215,239.

In his research, Dr. Richards will continue to develop recording and analysis techniques that will allow him to differentiate and distinguish the multiple contributions to the biomagnetic field from different parts of the small intestine. All living organisms produce a magnetic field, and the purpose of studying the biomagnetic field is to find new techniques for medical diagnosis and to gain information about normal physiology.

The ultimate goal of this project is to develop a sensitive magnetometer to measure weak magnetic fields, called a Superconducting Quantum Interference Device (SQUID), into a non-invasive diagnostic modality for patients with mesenteric ischemia. The mesenteric arteries are the arteries that supply blood to your large and small intestines.

Mesenteric ischemia occurs when blood cannot flow through your arteries as well as it should, and your intestines do not receive the necessary oxygen to perform normally. Symptoms of the first phase of mesenteric ischemia include severe abdominal pain and the passage of bloody stools. If ischemia continues, abdominal pain can become widespread, the belly can become tender to the touch, and bowel motility decreases. 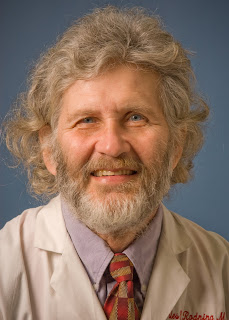 Dr. Charles B. Rodning, professor of surgery at the University of South Alabama College of Medicine, was recently installed as president of the Alabama Chapter of the American College of Surgeons at the annual conference in Point Clear, Ala.

Dr. Rodning has served as a faculty member at the USA College of Medicine for almost 29 years. He received his medical degree from the University of Rochester in Rochester, N.Y., and he completed his fellowship and residency training in general surgery at the University of Minnesota in Minneapolis.

The Alabama Chapter of the ACS is the largest surgical society in the state of Alabama, with more than 950 members who represent all surgical subspecialties. For more information, visit acsalabama.org.
Posted by Med School Watercooler at 12:01 PM 1 comment:

Dr. Arnold Luterman, professor of surgery at the University of South Alabama College of Medicine, shares advice on how to stay safe during the 4th of July celebration.  Click here for details - http://www.southalabama.edu/usahealthsystem/luterman.html .
Posted by Med School Watercooler at 11:57 AM No comments: 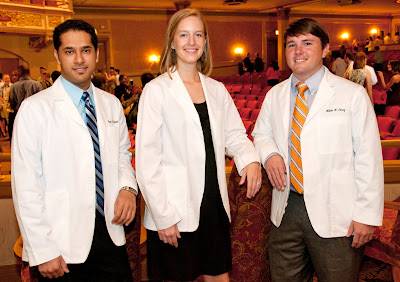 From left: Pavan Kapadia, Kacie Jackson and William Perez
The University of South Alabama College of Medicine held its annual White Coat Ceremony for the Class of 2012 at the Saenger Theatre on June 26, 2010.

During the ceremony, rising third-year medical students were cloaked with their first white coats, the traditional dress of physicians for more than 100 years.

“The white coat is a visible emblem of professional care,” said Dr. Tom Montgomery, professor and program director of the internal medicine residency program at USA. “It also symbolizes the development of a physician along their career path. During this transition, medical students become easily recognizable to the patients, and the patients look to the medical student for advice and counseling.”

Pavan Kapadia, a medical student at USA who comes from a family of doctors, has wanted to become involved in the profession since he was a kid. “I didn’t really know why,” he said. “It just seemed to click in high school and everything fell in line after that.”

Kapadia said this ceremony is an important milestone. “People look at you differently with a white coat,” he said. “They look at you with more respect, and I definitely feel more responsible.”

In the United States, medical schools typically organize their four-year curriculum into two distinct parts - the preclinical and the clinical years. This tradition holds true at USA, where students spend the first two years in a classroom setting learning the fundamentals of basic science and pathology, followed by two years of hands-on training in the clinical environment under the supervision and mentoring of faculty and resident physicians.

Dr. Montgomery, who is also past president of the USA College of Medicine Medical Alumni Association, called it a progression of responsibility. “You have to have the foundation of the first two years to best be able to take care of people in your last two years,” he said.

For students, the White Coat Ceremony served as a reminder of the importance and responsibility they take by dedicating themselves to the care of patients. “The ceremony was a really humble experience, yet a huge turning point in our medical careers,” Kapadia said. “We’re really headed toward clinical practice and serving people.”

Dr. Felicia Wilson, associate professor of pediatrics at USA, was the keynote speaker at the ceremony. During her speech, she emphasized the importance of the white coat. “The white coat conveys an image of compassion,” she said. “Most importantly, it is an image of hope and healing to the patients you serve.”

During the ceremony, the students took the Medical Student Oath, a promise to uphold the human aspects of medicine, such as sensitivity, compassion and respect for patients.

Kacie Jackson, president of the College of Medicine’s Class of 2012, is the first in her family to go to medical school. “I’m the most excited and terrified I’ve ever been all at the same time,” she said. “I’m looking forward to talking to patients, helping them, and showing them how they can help themselves.”

“Instead of professors, we now have patients as our teachers,” said Jackson in her speech to the class. “Yes, we will be healthcare providers, but also servants – and for that we should be very proud.”

William Perez, another medical student who received his white coat at the ceremony, has suffered from an immune deficiency his entire life. He said it was this medical condition that had a significant influence on his choice of profession. “There were always doctors and nurses helping me,” he said, “and that experience made me want to be a doctor -- so I can help others in the same way. This ceremony was a very proud, climactic moment in my life, and I had a great time.”

Dr. Wilson concluded her keynote speech with a quote from George Washington Carver that underscores many qualities the medical profession entails. “How far you go in life depends on your being tender with the young, compassionate with the aged, sympathetic with the striving and tolerant of the weak and strong. Because someday in your life you will have been all of these.”

The medical students began their third year on Monday, June 28.
Posted by Med School Watercooler at 2:29 PM No comments: