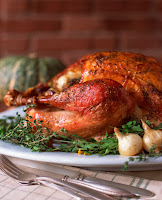 Happy Thanksgiving!
Posted by Med School Watercooler at 10:15 AM No comments:


Dr. David Wood, professor and chair of microbiology at the University of South Alabama College of Medicine, was awarded a renewal grant in its 27th year by the National Institutes of Health (NIH) for the research surrounding a vaccine for epidemic typhus, one of the most deadly diseases affecting humans. He credits much of his success to his mentor Dr. Herbert Winkler, who introduced him to the research surrounding the bacteria responsible for epidemic typhus, Rickettsia prowazekii, when he arrived at USA in 1979.

“My early discussions with Dr. Winkler revealed that very little in the way of genetic analysis had been done in the rickettsial field, and as a true mentor, he encouraged me to pursue my interests in the area,” Dr. Wood said. “I became very excited about understanding how the rickettsiae exploit host cells and how I could address the challenges that the intracellular lifestyle places on genetic analysis.”

Dr. Wood said that his interaction with Dr. Winkler inspired him to submit his first rickettsial NIH grant proposal, but early critiques were very unfavorable. Although he was very enthusiastic about the project, NIH decided not to fund him the initial year.

“As a young tenure-track assistant professor, I did not want to go to my mentors and let them know that they hired someone who received such rejections,” he said of the NIH decision. “I was extremely fortunate to have Dr. Winkler as a mentor and Dr. Joseph Coggin as a chair who continued to strongly support and encourage me despite the initial setback.”

According to Dr. Wood, this setback only fueled his motivation and led to his collaboration with Dr. Winkler on cloning and expressing the first rickettsial gene. This led to the submission of a second proposal that was funded, and has continued to be consecutively funded for nearly three decades. Dr. Wood also is only one of five at USA to be awarded a MERIT (Method to Extend Research in Time) award, which is among the most selective grants awarded by NIH.

Dr. Wood explained that rickettsiae are associated with vectors such as lice or ticks, and they can transmit the rickettsiae to humans. He is very interested in the unusual biology of the rickettsiae because they only grow in the cytosol, or the liquid component is inside host cells. Instead of being enclosed within a vacuole, which normally isolate materials that might be harmful to the cell, the organisms can escape into the cytosol where they grow until the number of rickettsiae becomes so great that the cell bursts, releasing hundreds of infectious bacteria. The primary focus of his team’s work revolves around understanding how the agent is able to behave this way and identifying new targets for antimicrobial agents or developing vaccines that could potentially help people become immune to epidemic typhus.

“Our ultimate goal is to gain a better understanding of this novel infectious disease agent and develop a good vaccine,” he said. “Coming up with a vaccine for epidemic typhus could save many lives,” he added.

The research initiated by Dr. Herbert Winkler more than 30 years ago has helped to establish a Select Agent Program centered on Rickettsia. This motivated others, like Dr. Wood and his colleagues, to obtain NIH funds for the construction of a new research lab. The 25,800-square-foot Laboratory of Infectious Diseases building (LID) will be located in the USA Technology and Research Park on the north side of USA’s campus. It will replace the current Biosafety Level 3 (BSL-3) laboratory building, and will more than double the current Biosafety Level 3 research capability at USA.
Posted by Med School Watercooler at 9:53 AM No comments:

“Anytime you participate in an outreach or service effort like the University Lions Club, it changes your perspective,” she said. “The University Lions has given me an opportunity to give back to the community, and we are able to make a meaningful difference in the lives of many people.”

According to Burnham, the University Lions Club sponsors several projects in the area including a Christmas Party at the Alabama Preschool for the Sensory Impaired, camp scholarships for children with diabetes at Camp Seale Harris and Camp Sugar Falls, USA Eye Research Institute, and Habitat for Humanity.  They also collect eyeglasses that are then recycled for people who cannot afford glasses, and they maintain over a half a mile of shrubbery in the medians of University Boulevard in conjunction with the Keep Mobile Beautiful organization.

“Before becoming a Lion, I had never thought of the impact having diabetes has on a child, not only medically, but also socially and psychologically,” said Burnham. “Supporting projects such as scholarships for Camp Sugar Falls can help to ease that burden for a child.”

Tommie Carlisle, who is president of the University Lions Club and has been a member for almost 15 years, said he believes humans are obligated to help one another, and with the help of like minded club members the impact of sharing this idea is much greater.

“I am happy to be a part of the organization and to be recognized, but I do not solely deserve this recognition because I feel there is so much more to be done to strengthen our organization,” he said. “It is a team effort--I’m the guy that gets the trophy for being a valuable player, but I could not have done it without the people around me, and I would like to share this award with everyone in the University Lions Club.”

Carlisle, coordinator for health services operations at USA Health Services Foundation, said he hopes the club’s work will ultimately benefit the entire world by working to decrease visual impairment and hearing impairments, and his club lives by the organization’s motto “we serve.”

“One of the biggest programs we are involved in is sending children to camp in the summer,” he said. “The kids have the opportunity to fish, camp and have fun. They learn from one another and realize that they are not alone.”

Carlisle said one of his favorite club events is the annual Christmas party with the Alabama Preschool for the Sensory Impaired. “If you could only see the smiles on kids’ faces when they receive a gift from Santa and sing Christmas songs,” he said. “This is something we’ve been doing for almost 15 years, and it is so rewarding to see our efforts lead to so much happiness and results in a joyful experience for these children.”

The University Lion’s Club currently has 17 members, but they are eager to accept anyone who wants to help serve the community. The University Lions Club meets every 2nd and 4th Tuesday at noon in the Virginia Harr Conference Room in the Medical Sciences Building on USA’s campus.  The only criterion needed to join the club is the desire to serve others in the community.

“The University Lions Club welcomes new members,” said Burnham. “We have some exciting plans for 2013 and invite others to join us.”

The Lions Club is the world's largest service club organization with 46,000 clubs and 1.35 million members, and their main concerns are diabetes and eye research. For more information about the University Lions Club, visit http://e-clubhouse.org/sites/mobileuniversity/.
Posted by Med School Watercooler at 9:20 AM No comments:

The University of South Alabama College of Medicine will hold a dedication ceremony to honor Sandy Worley, a secretary in the physiology department who passed away in 2011.

The dedication will take place Tuesday, Nov. 27, 2012, at 3:30 p.m. on the east side of the Medical Sciences Building, where benches and trees have been placed in memory of Worley. During her 29 years with the University, she worked closely with medical and graduate students in the College of Medicine.

According to Penny Cook, both long-time friend and colleague, the benches were selected because Worley loved the outdoors and enjoyed reading. "We hope this spot will provide a nearby place for people to stop and appreciate some of the things she enjoyed," Cook said.  "The cherry blossom trees selected as landscape represent the many years she lived in Washington, D.C."

For more information on the dedication, email Penny Cook at pcook@usouthal.edu.


Posted by Med School Watercooler at 4:07 PM No comments: