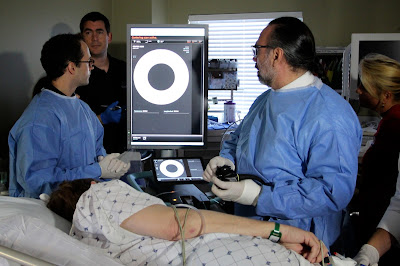 The University of South Alabama Digestive Health Center continues its role as a national leader in gastroenterology patient care with the recent addition of a top-tier, endomicroscopy imaging system.

USA is the first institution in the world to offer the NvisionVLE™ Imaging System since it garnered approval from the Federal Drug Administration (FDA) in April.

“This technology is similar to combining a microscope with an endoscope,” explained Dr. Jack Di Palma, director of the Digestive Health Center and professor of internal medicine at USA. “In previous imaging technology, the endoscopy probed only the surface-level tissues. This system now allows us to examine the tissue up to three millimeters deep, giving us the ability to diagnose without surgical biopsy.”

According to USA Gastroenterologist Dr. Reynaldo Rodriguez, associate professor of internal medicine at USA, the largest clinical application of this new technology will be for patients with gastroesophageal reflux disease (GERD). This widely prevalent condition can potentially lead to Barrett’s Esophagus, which is a change in the tissue lining the esophagus. The high presence of Barrett’s is a predisposing factor for esophageal adenocarcinoma, a cancer with a high mortality rate that is rapidly rising in prevalence in the United States.

Early detection is crucial in lowering the risk of progression from Barrett’s Esophagus to cancer. When Barrett’s Esophagus is found, the patient is often treated with radio frequency ablation (RFA) in which the affected tissues are burned and removed to lower the pre-malignant risk, according to Dr. Di Palma, who also practices with USA Physicians Group.

However, Dr. Rodriguez notes that RFA-type procedures are not always effective in completely eliminating Barrett’s Esophagus.

“Even with RFA, the patient may have ‘buried Barrett’s’ in the deeper tissues that previous technology would not have revealed,” explained Dr. Rodriguez. “This imaging system will allow us to successfully identify ‘buried Barrett’s’ without the need for a biopsy.”

“We are pleased to partner with the University of South Alabama as they become the first institution in the country with a commercial system,” said Dr. Charles Carignan, president and CEO of NinePoint Medical, the creators of the NvisionVLE™ Imaging System.